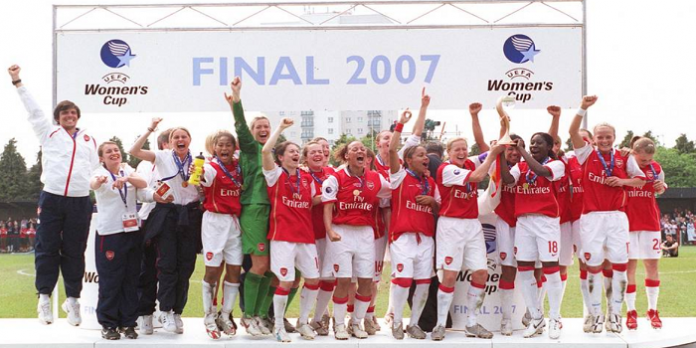 13 years ago today, Arsenal Ladies won the European Cup. They remain the only British side to achieve that feat in the women’s game. During the 2006-07 season, the Gunners won the Quadruple without losing a game. Their domestic dominance was unchallenged but winning what was then known as the Women’s UEFA Cup [since rebranded as the Women’s Champions League because, well, that’s exactly what it is] is the pinnacle of the club’s history.

Here is the story of how they won Europe’s premier trophy, featuring quotes from members of that squad Kelly Smith and Faye White, whom I interviewed about this triumph for the Arsenal Women Arsecast last April. You can listen to the full episode here.

THE GROUP STAGE
Arsenal were drawn to play Rossiyanka [Russia], FC Femina Budapest [Hungary] and Brøndby from Denmark in the group stage. The Gunners had a score to settle with the Danes having lost to them in the group stage during the previous season. The defeat meant that Arsenal finished 2nd in the group in 2005, drawing Frankfurt in the quarter-finals, to whom they eventually lost.

All three of the group stage matches were played in a period of five days in Rossiyanaka’s Krasnoarmeysk Stadium. Arsenal opened with a topsy turvy 5-4 victory over the hosts on 12th September, 2006. Scottish striker Julie Fleeting, who lived and trained in Scotland and commuted to London for matches, scored all five goals on this occasion.

Two days later, Arsenal thrashed FC Femina Budapest 6-0 with strikes from Rachel Yankey, Katie Chapman, Gemma Davison an Aranka Paraoanu own goal and a brace from Jayne Ludlow. Lianne Sanderson also missed a penalty in this game. It teed up a playoff for top spot with Brøndby also having won both of their games. Arsenal only needed a draw to guarantee first place but went one better with a 1-0 victory courtesy of Lianne Sanderson’s 48th minute goal.

QUARTER-FINALS
Arsenal drew Icelandic team Breiðablik in the first knockout round, travelling to play the first leg at Kópavogsvöllur Stadium on 12th October, 2006. Kelly Smith gave Arsenal a first half lead before the floodgates opened in the second half, Smith added a second after 67 minutes, before Lianne Sanderson and a Julie Fleeting brace punctuated a flurry of four goals in 12 minutes to give Arsenal a commanding first leg lead.

SEMI-FINALS
Arsenal were re-united with group stage adversaries Brøndby in the semi-finals for a third tournament meeting in two seasons. Familiarity certainly bred contempt in a fiery first leg at Brøndby Stadium on 4th November, 2006. A Kelly Smith free-kick put Arsenal in front after 9 minutes, before Pape’s header levelled the scores just seven minutes later. The second half followed the exact same pattern, Smith put Arsenal back in front on 51 minutes, before Jensen levelled the scores within 8 minutes.

The game exploded on 78 minutes when Smith, fed up with the rough treatment of the home side, received a second yellow card for retaliation. The red card meant she would miss the second leg. In her fury, Kelly responded to the jeering home fans by flicking the v-sign at them, earning her an extra match ban. As she approached the tunnel, she kicked a chair over. That act earned her an extra match. A three-match ban was handed out, meaning her tournament was over.

“David Dein wrote a letter to UEFA apologising on my behalf, but it didn’t have the desired effect,” Kelly told me last year. “The news of the ban came through about a week later and I was distraught because it was something so silly.” Kelly was physically targeted often during her career and she admits that frustration at being repeatedly fouled spilled over on many occasions. Kelly suffered many serious injuries in her career as result. “I didn’t always feel like I got the proper protection from referees and I was scared of getting injured again, so I often took the law into my own hands.”

Vic Akers adapted to her absence with a surprise 4-3-3 formation for the second leg. Rachel Yankey played on the left of a midfield trio alongside Ciara Grant and Jayne Ludlow. Teenager Karen Carney was drafted into a rotating front three with Julie Fleeting and Lianne Sanderson. It proved too much for Brøndby to handle. A 33rd minute strike from Yankey set Arsenal on their way, before Carney added a second eight minutes into the second half. Julie Fleeting completed the scoring in stoppage time to seal a 5-2 aggregate victory.

THE FINAL
Arsenal were rank outsiders against Swedish side Umeå, especially with Kelly Smith suspended. “Nobody gave us a chance,” admitted Faye White. Umeå had won the trophy in 2003 and 2004 and reached the final in 2002. They boasted a forward line featuring Hanna Ljungberg and 21-year old Marta [they also had 16-year old Ramona Bachmann in their squad]. Akers again set on his 433 / 451 hybrid formation and the Gunners prepared to play in an unfamiliar, defensive manner relying on the counter-attack.

Faye White told me that the absence of Kelly Smith may have worked in Arsenal’s favour psychologically, “I think the media and people outside of the group make a bigger thing of it than players do. We know the worth of every player and it made us more determined to prove it. Sometimes it’s harder for the opposition too, because they don’t have a good idea of how you’ll play. We quite liked being the underdogs.”

They masterfully held Umeå off during the first leg at Gammliavallen Stadium on 21st April. On a rare foray in stoppage time, Alex Scott carried the ball forward from right-back with the wind at her back. She scuttled past the bench, past Vic Akers, who urged her to chance her arm. Scott took aim, the ball was carried by the wind and sailed over Carola Söberg and into the net to give Arsenal a first half advantage. “I was one of the only English people in the stands and when Alex scored I went crazy, because I knew how important that away goal was for us,” remembers Kelly Smith.

“Nobody expected us to go to Sweden and get anything. So when we did we knew we had a chance at Boreham Wood where we were strong. We had the choice to play the second leg at the Emirates, but we chose to play it at Meadow Park. It was our fortress; it was more intimate and we felt it would be more intimidating. We wanted to frustrate them and we felt it would be too open at the Emirates.”

The second leg, played on 29th April, 2007, was a nerve shredding affair as Umeå threw the kitchen sink at Arsenal. The Gunners held on and held on. At one point, a shot from Madeleine Edlund rebounded off the post, onto the prone Emma Byrne’s face before clipping the post again on its way out for a corner. “It was horrific to watch,” remembers the suspended Kelly Smith. “My heart was pounding, my mouth was dry and I couldn’t sit still.”

“You always need a bit of luck to win a cup competition, but we earned it,” remembers Faye White. As Umeå continued to squander chances, Kelly Smith says she knew it was Arsenal’s year, “There was something in the air that you could smell or taste, there was something happening that afternoon.” Arsenal survived, sealing a famous win, the first, and to date only, British women’s team to win the Champions League.

“We had a team full of leaders,” says Faye. “We had the captains of England, Wales, Scotland and Ireland in the team.” White, who was the club captain, missed most of the campaign with a cruciate ligament injury and was a substitute for the final. “The names from that team; Fleeting, Byrne, Carney, Yankey, Grant, Ludlow, they just trip off the tongue,” Kelly Smith says with relish. “We were all on the same page and playing near our peak. It was a buzz to be around.”

Those were the days!
Even then we won without captain Faye and world class star Kelly playing.
Ironically, the squad listed above by Tim numbers 19. That is the same number as we have now excluding the two loanees and yet these days it is considered too small to win anything never mind an “invincible” quadruple winning season!!!

Just thinking I recognise all of the names but for Sian Larkin and Dani Buet.
Whatever happened to them after making history?

I know Sian played for Chelsea at some point after Arsenal and then Charlton, not sure after that. Dani Buet is now Dani Bowman and captains Brighton and also spent a few years at Chelsea.

Cheers Tim, I thought you would know.