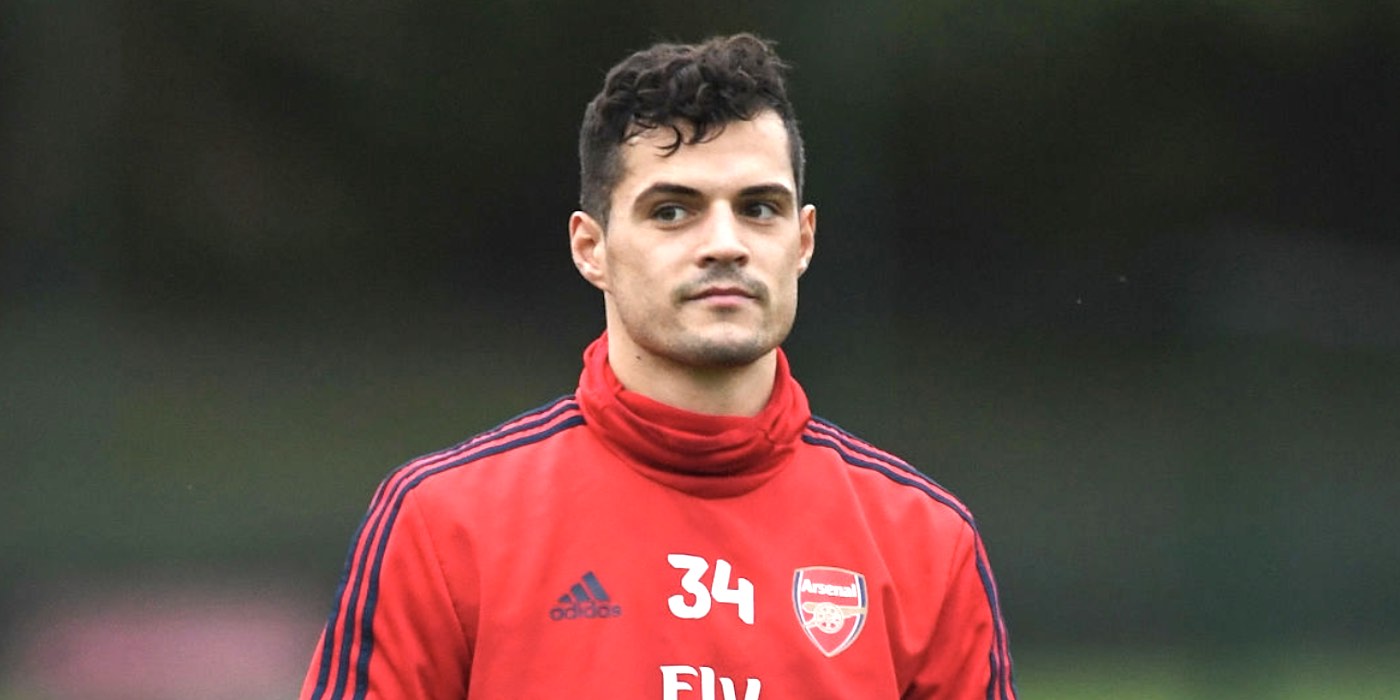 Granit Xhaka says he has enjoyed a new start at Arsenal since Mikel Arteta took over and says despite coming close to a move to Hertha Berlin in January he’s fully focused on life as a Gunner.

After his infamous falling out with the Emirates crowd at the tail-end of last year, the Swiss midfielder was stripped of the club captaincy and appeared determined to continue his career elsewhere.

Arteta very quickly persuaded him to stick out the season and the 27-year-old has been impressed with what he’s seen from the Spaniard in the months since.

In an interview with German website Sport 1, Xhaka was asked about how close he was to an exit. He said: “It’s really no longer an issue for me.

“Yes, there was contact and I had an offer, but in the end I decided to stay here in London. After three and a half years I didn’t want to cancel everything that I had built up.

“Now I’m concentrating on this with all my strength and motivation and hope that we can get back on the pitch soon.”

He added: “I think I have had a very good relationship and very good contact with all the coaches here at Arsenal.

“Everyone has their own character, their own philosophy and also their own way of doing things. With Mikel, however, I’ve had something of a new start, a reset.

“I had very good conversations with him right from the start, in which he showed me what he expected of me, how much he needed me in the team and how much he valued me as a player. It was very motivating and convincing for me.

“With Mikel you immediately notice that he has a very wide-ranging, long-standing know-how that he passes on very well to the team.

“He is absolutely professional, pays great attention to discipline, team spirit and is open and direct in communication.

“I am convinced that we’ll have a lot of fun with him.”

Xhaka was also asked about the wage cut talks held with the Arsenal hierarchy and reports in the media that Mesut Ozil was one of a couple of players who to date have turned down the request.

The Swiss was quick to point out that footballers often do a lot that goes unseen and that such actions preceded the coronavirus outbreak.

“This crisis has once again opened the eyes of many, including us players, to how quickly everything can be over and how important everyone’s health is in society,” he said.

“Many players do something to help, for example, organising fundraisers, which is very individual.

“Many also do this in the background without making it public. Therefore I do not want to rate or comment on this here, nor what is highlighted or discussed in public there again.

“By the way, it’s not new that many top players are committed to organizations and the needy. This has not only happened since this crisis.”

You sure have mate. Long may this continue and hopefully a couple of trophies on the way soon.

I was heavily against him playing again after his little spat with the fans, but have to admit his performances under Mikel have been night and day from before. Happy for him to stay when he plays like he had been.

Well said mate… I was on the exact same belief. As i wanted nothing short of him being sold, since MA has come on
board, he plays within himself now. Future looking bright

Let’s hope he improves under Arteta. We need the players to step up, Emery is gone and they cant use him as an excuse.

I really like Xhaka, we need to add some dynamism around him, but he’s a much better player than he gets credit for.

Ever seen Arsenal in the CL since Xhaka arrived? That’s all you need to know about him. The fact that he was forgiven so easily with little repercussion for his ‘falling out’ is a testament to current weak mentality higher up at the club as well as with Emery. I’m disappointed that Arteta is hanging onto him. Xhaka is the sword that both Wenger and Emery fell on, I wouldn’t want Arteta to head in the same self-destructive direction.

Ever seen Arsenal in the CL since Auba arrived? Do you see the problem with your logic there, buddy?

Auba joined a team that could’ve been in the CL had it not been for Xhaka’s consistent and ludicrous blunders costing us points (same as Mustafi’s). Xhaka is slow and one dimensional – my point is that he’s at the heart of the Arsenal decline from being a European elite club. Our midfield lacks any sort of dynamism because of him. I’d rather see playing time invested in Guenduozi or even Willock so they can mature into quality players rather than see an overrated delinquent there – I understand the humanity of the fallout situation, but there’s a reason the… Read more »

Gotta think about the fact we have no money, so making the best use of what we have is extremely important.

I don’t know about this (the no money part), maybe we’re a bit cash strapped now, but there’s more potential quality in our youth, and this season’s been a write off since the day Emery was allowed to coach a match during it (not to mention the current situation) – so why not use that to build up experience for younger, faster, more technical and intelligent players?

Mic, I am also not convinced, and think we need to get rid of both xhaka and mustafi. Bring on the downvotes, I’m immune to them.

He’s done well but I would still move him on. He just lacks the foot speed to be an elite player, even though his passing from deep is world class.

Ceballos should replace him. The data analysis in James’s and Tom Worville’s Athletic article won me over. He is statistically a better defender, as well as being a far superior dribbler, which makes him more press resistant. If we can extend his loan for another season, it could be economically viable.

If we replaced Xhaka with the left-footed Pape Gueye – a snip at 7m – and paired him with Ceballos, we could in theory rebuild the centre midfield for next season and have money leftover for other areas.

I had been saying since he arrived that Ceballos would do best in Cazorla’s position. His footwork in tight spaces and his tackling makes him the perfect player in a deep lying midfield position. I’m so glad that since he’s returned, he’s been played in that position by Arteta. Our ability to get out of trouble from the back has been terrible since Cazorla left, arguably one of the major factors in our descent from CL football, but I hope Ceballos can help us get back.

I’m all for second chances and hope his works out. Perhaps he may turn out to be a ‘player’?

He’s been great since Arteta came in though it’s debatable if he has a long term future here. We’ve been hugely linked with the excellent Thomas Partey over the last couple of years and we’re apparently keen on a permanent deal for Ceballos. Not sure where Xhaka fits in the first 11 if we get those deals or similar over the line.

He’s improved but he’s still too limited to be good enough for a champions league arsenal team. Our midfield is currently the worst it’s been in 20 years at least and the foundation of how we play football relies on a strong midfield.

Still want Partey over Xhaka. We’re more accomodating to his weaknesses and utilizing his strengths than having a complete midfielder.

Too many delusional people. Arsenal is no longer the club we were under Wenger. Where we were still clinging on to 5th and closer to 4th, the drop off has been rapid. Until we can establish 4th or higher again (The irony for those Wenger out who complained about 4th place pot)….we will have issues with recruitment. Current virus landscape will skew this further. Whilst ALL clubs will be massively impacted, we will have to watch our high salaries. We will likely have to off load and not necessarily just the players some people have a perennial and inexplicable hatred… Read more »

Missed you long gibberish, santori. Wait, no I haven’t.

Xhaka has always been a decent asset not given sufficient structure around him to work to his best. Wenger’s lose structural system has arguably been missing that combative free ranging type in the middle of midfield since the departure of Gilberto/Viera. For a while there was hope Diaby could stay fit (feint hope which did not last terribly long) and Santi was a bright spot controlling the midfield. Ramsey had a season of splendour but in the deeper role tended to wander too far forward without sufficient player to back up. The aging Flamini was reasonable for a spell but… Read more »