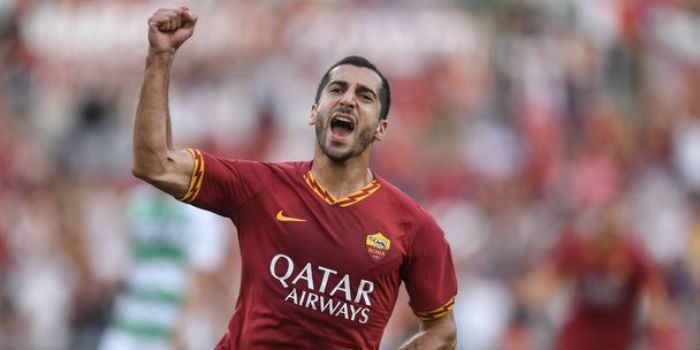 Mino Raiola says comments attributed yesterday to Henrikh Mkhitaryan by Corriere dello Sport are ‘fake news’ and that his client would never put pressure on a transfer at a time when football faces so much uncertainty.

Against the backdrop of a reported eagerness to turn his loan deal with AS Roma into a permanent move, the Italian sports daily claimed the Armenia international had the following message for Arsenal:

“My time in London is over, I hope you manage to find an agreement with Rome because my desire is to stay.”

The comments did seem a little out of character for Micki – he’s pretty reserved – and Raiola has been quick to hit back with suggestions they were fabricated.

In a statement on Twitter, Raiola wrote: “Mkhitaryan did not send any message to Arsenal. Specially in times like these, fake news are completely unacceptable.”

Mkhitaryan did not send any message to Arsenal. Specially in times like these, fake news are completely unacceptable. pic.twitter.com/Fyh35MdO9D

What isn’t disputed is Roma’s eagerness to retain Mkhitaryan’s services. As we mentioned in yesterday’s report, head coach Paulo Fonseca is on record saying, “I want him to stay and he also wants to stay.”

In the short-term, discussions between Arsenal, Roma, Raiola and Mkhitaryan will likely focus on an extension to his current loan deal, which ends on 30 June, in line with FIFA recommendations. To finish the current Serie A season – should it restart – the midfielder will probably need to re-sign until the end of August.

Mhiki not ready to pull out of the arse just yet then.

Let’s hope this is fake news, and he gets another chance at Arsenal. The reason he is doing well in Roma is because his manager understands football, tactics, and player managment. Unfortunately for him, his last two managers were total idiots with a lack of understanding how to manage.

Arsene Wenger and Unai Emery have had amazing success in their careers as football managers, when you take into account their idiocy….

How many games have you managed again?

As much as I like Arteta, nothing’s changed, the Arteta bounce is a myth, we’ve played well for 20-30 minutes in games, but overall we’ve been just as dire.

I meant Jose and Emery, not Wenger.
I agree with you on Artera, I still don’t think he is the right man for us at this time in his career, but I wish him the best.

The other issue if we let Abu go, and don’t bring in quality players, then Arteta or even a klopp with this team will have no chance to get into the top 4. We have to keep Abu or replace him with quality.

I wouldn’t want Mourinho anywhere near Arsenal… But he’s still won 23 top level trophies in 19 seasons, not bad for an idiot… I agree our squad isn’t currently up to much, but as long as Arteta has the support of the dressing room? I think we give him a couple of seasons to work. The one thing we have going for us is the young players, Martinelli, Saka, Nketiah, Nelson, Willock, Smith-Rowe, Niles, Tierney, Saliba, Guendouzi, Torreira, and there’s a good chance Pepe will be much better next season. We need 2 seasons to develop a young team, combined… Read more »

José Mourinho and Unai Emery, I am pretty sure he meant them two

Wenger is a legend, and I don’t think Mhiki was there when Freddie was the manager. I ment Jose and Emery.

Emery is no idiot.

He struggled with language and communication, and the club weren’t strong enough in backing him clearing the decks, particularly with the over the hill Ozil.

He then lost the dressing-room, which might say more about the players than the manager.

No…if this season at Roma is anything to go by, then it shows he is too injury prone to be a real benefit to us.

Aah the old “put out a story then plausibly deny it” ploy. Jog on Raiola. Hopefully one of the good things to come out of the current shit fight is the end of parasites like you feasting off football.

If you don’t like the cost of doing business? Don’t do the business
It’s called freewill

That’s just one of most stupid statement eve!What are you smoking!