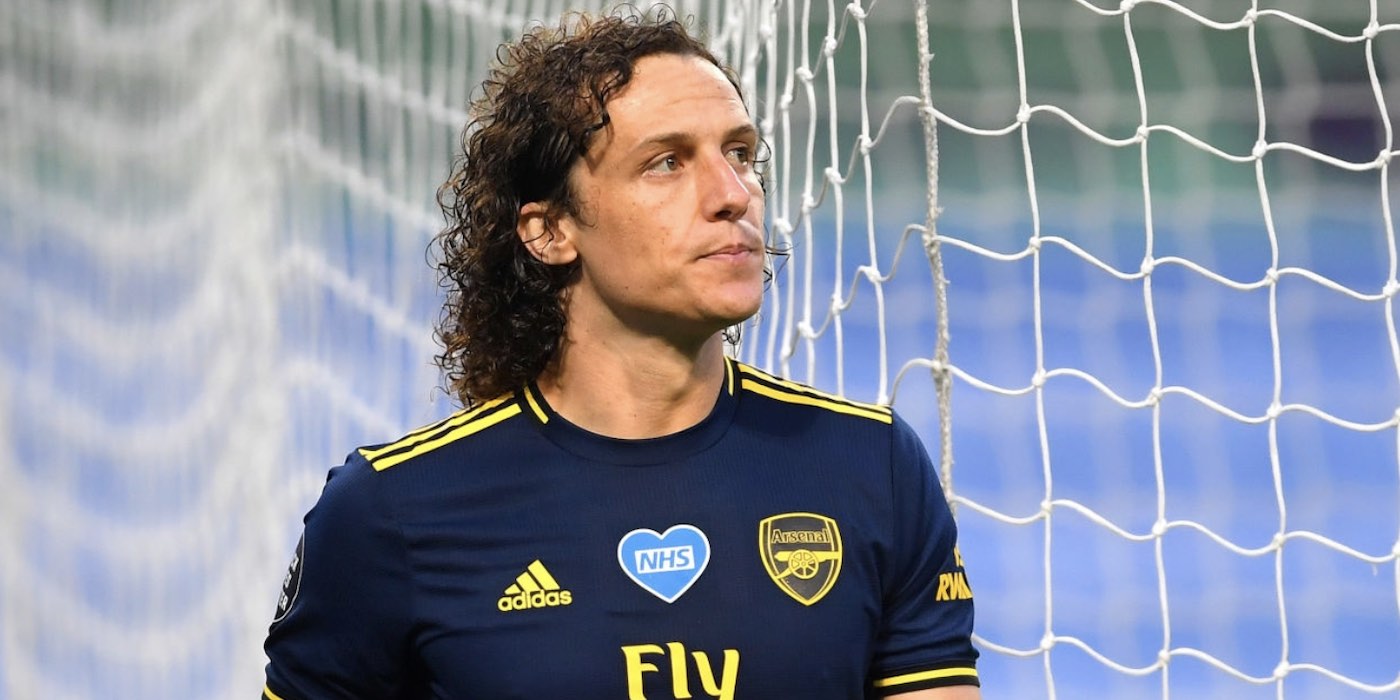 Kia Joorabchian, the agent of David Luiz, says that the Brazilian wants to stay at Arsenal and that the club have shown an interest in making that happen.

His comments come in the wake of a disastrous performance by the 33 year old, whose errors led to two Man City goals in the 3-0 defeat at the Etihad last night – as well as his second sending off the season, leaving the Gunners with ten men.

That was followed by a bizarre interview in which Luiz accepted the blame, but suggested uncertainty over his contractual situation played a part.

Speaking to TalkSport, Joorabchian said, “What I can tell you, is that the situation from Arsenal’s point of view will be resolved this week.

“And it’s not just Luiz’s situation, I think there are several issues within the whole structure that will get resolved.

“The 23rd of June is the deadline for most of the clubs to renew their contracts so that they can finish the season off and beyond.

“So, irrespective of any situation by the 23rd everyone’s situation should be resolved.”

Pressed on whether the former Chelsea man wanted to stay, he continued, “Yes. He said he did,” while saying “Absolutely!”, to the idea of Arsenal being willing to offer him an extension to his current deal.

In the very short term, Arsenal are light on centre-halves with Sokratis injured, and a fully fit Rob Holding not even in the squad. Calum Chambers is out long-term, while Luiz himself is suspended for the next two matches.

In this context the case for keeping Luiz until the end of this season could easily be made, but based on what we’ve seen from him throughout his time in North London, it’s much more difficult to convince people another year would be in our interests.

Joorabchian also dished out a fine line in not making excuses while seeking to make excuses about his client’s errors last night.

“You’re playing one of the best teams in England and Arsenal’s lack of shots on goals, their lack of control of the game would have put pressure on the defence,” he said.

“With no excuse whatsoever, David wanted to have a different sort of game.”

Arteta: We should have been three or four-nil up

So dafuq was the post game interview? Idk I’m Brazilian and my opinion is biased since Germany trashed us in the WC, but David Luiz should be retired after that game.

He’s madly inconsistent and the routine to go straight off to the media to complain/cry/excuse himself pisses me off.

Ps.: Edu and Raul are doing more harm than good being scammed by agents like Kia.

Too Drunk To Be Offside
Reply to  Pat Rice and Beans

I saw the game yesterday and frankly it felt like a hollow feeling. Its not about the result or anything, but the fact that football is happening while there is this big crisis looming over the world, is hard to balance.   I am not saying that there should be no football, but the way the larger crisis overshadows the football and frankly everything else right now makes enjoyment of football, even Arsenal games a little hard.   It is hard to fully immerse oneself in the game like before if you know what I am saying.   I think… Read more »

Joseph Kawooya
Reply to  Too Drunk To Be Offside

I was not alive during the world War, so my reply won’t best fit

Hahaha, I’ll bet he does.

Blogs I wish we could do emojis. Perfect occasion for the tears laughing emoji.

I’m not opposed to him staying as an option rather than a starter but he’s simply not worth the money we’ve already spent on him, let alone £100,000 per week for another year. This is just another expensive mess our board have lumbered the club with.

He was an option yesterday, not a starter. Still want him to stay?

He wants to stay because nobody in their right mind would sign him and if they do, it won’t be the big payday he expected because his value has diminished after this season. Add Covid-related bank issues and he has received his last good contract at Arsenal. We don’t need anymore leeches. Leave!

Oh when there’s no other interest he decides he wants to stay after obviously bitching around.

We were in trouble the minute Sven left the club.

We were in trouble the day David Dein walked out on us.

David Dean was a big part of the godawful stadium deal which has led to us being fucking useless for over a decade.
He’s a nice guy and all, but that deal is the primary reason we’re where we are now.

David Dean wanted us to play at Wembley and not have a stadium. I don’t know how such a fuck up has become so admired.

Him and Wenger formed a great duo together which is why he’s so admired. We’ve really struggled with recruitment since he left.

Yeah the stadium deal and bringing in the Kronks wasn’t great but he saw the way it was going with billionaire ownership, unfortunately he picked the wrong billionaire.

Sven was behind the Invincibles, right?

Sven has a better life now. He is in Frozen II

Just piss off and take that bellend of an agent with you.

Really, regardless of what you think of our recruiting strategy, how can it be helpful to have these guys who have no loyalty to the club around making public criticisms about the way our team plays?

Of course, we can all see that Arsenal didn’t have a great game beyond Luiz, but leave that for the pundits and the fans to discuss, not someone who’s engaged in a weird power struggle between players, the club, and the execs.

Joorabchian and his like will ruin what is left of this club. They’re going to park their clients no other club wants at Arsenal for big money.

Buckle up people, we’re in for a long bumpy ride

If that doesn’t tell you how rotten to the core this club is, nothing will. FFS Arsenal, kick the useless mercenary twat out.

I think him staying another year is potentially a good move. Obviously it would depend on how much he would be willing to pay…

I think your comment went over the head of a few on here. Again some parallels to a Luiz performance.

Honestly, what have WE done to deserve this utter shit we get continually dished out to us?! It would be comedic were it not so utterly depressing.


It’s like we sold our souls to the devil for our Invincible season.

Close. We had the Invincibles, then we sold it to him shortly after. In exchange for what exactly, I’m still not sure. Word has it he doesn’t say much and seldom attends games, so we may never know.

The silver lining of our CB situation is Holding get a good run of games. He deserves another shot, hope he takes his chance.

Agreed, Holding deserves it and actually this is how he’s always put in good performances by making his opportunity count. He’s got a mature footballing head but it is yet to be seen if his body follows as well

Everyone seems to like David Luiz alot, but that is not worth what we’re paying him.. I thought we were done paying good money for old overpaid players.

Maybe bring him in as a dressingroom-staff if he is that good of an influence to the squad.

I’m so looking forward to Saliba coming in next season.

We blame Kronke for not spending as much as Sheikh Mansoor or Roman but look how badly we manage our existing finances. Who in their right mind would ever give the likes of Ivan and Raul a warchest?

We need raid the Championship, and purchase 4 top defenders from the top 4 sides. I am sure they cant do any worse.

This guy should just leave at the end of the season, period!

He should leave now. Like, as you’re reading this.

I don’t know about you, but I hate Luizing…….my coats on the bed. Can someone grab it for me?

Well, he’s been shit, so I think he should fuck off instead.

I’d rather play the kids who like the club, play some attractive but flawed football and maybe be a bit shit for a while than have all these vampires sucking the club dry. I mean, is this what we moved from Highbury for?

Dunk, Tarkowski, Ake all an upgrade, all the right side of 30 and all gettable.

Can anyone think of a cast off from a top 6 club that has worked since Jennings? Luiz, Silvestre, Gallas, Welbeck…all disappointed (Sol was a free agent).

Cech was ok. Certainly the best ‘keeper we’ve had between Crazy Jens and our current Superhero, without whom we’d probably be in a relegation battle.

It’s quite concerning how Kia feels so confident to discuss our club and even it’s own internal operations to Talksport.

From a club known for it’s secrecy, to what’s becoming a puppet club and PR for Kia who can talk so openly about us. Is this Raul’s vision for the club? To turn us into Kia’s Corinthians?

Edu is also a sock puppet

If I am understanding him correctly, Raul and Edu have some explaining to do. That aside, they surely can’t be considering extending his contract after a performance like that. Luiz seems like a nice guy but he should be enjoying his swansong at Vitoria next season.

So, Mr Agent. Your dear client wants to stay, does he? I’m sure he does. Well, I’m sure we can find something for him to do. There’s the kit laundry, the training ground pitches need mowing and Lord Xhaka needs a boot boy to fetch and carry his enormous ego. Then there’s the toilets to be cleaned, and Mr Bellerin’s Louis Vuitton flight cases containing his latest vogue collections from Paris and Rome to be moved into the changing rooms. Lunch is at 1.00 and then the entire playing staff need to be taken ferried to and fro from Spec-savers.… Read more »

The fecking cheek of him. Im jumping to conclusions but it’s be fair to say Luiz’s comments last night was his way of saying he wanted to stay for 1 year and he should’ve just signed the ting instead of playing silly buggers which he was PROBABLY instructed to do by this very guy. So David plays like a clown because of uncertainty and maybe isn’t very happy with mr super agent so now mr super agent is trying to soothe things over by talking rubbish about shots on goal to appease. Wish we could be rid of the pair… Read more »