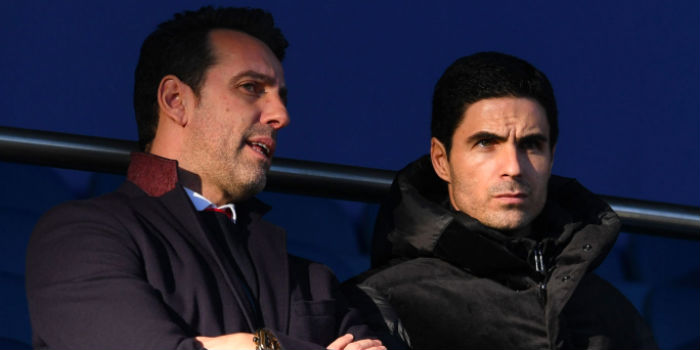 Mikel Arteta has warned that people won’t always understand the decisions he and the club make when it comes to rebuilding his squad but he maintains that when you have a clear plan, that doesn’t matter.

While it’s unclear how much clout Arsenal will have when the transfer window opens, the boss insists that he has clear ideas on talent identification and that his dressing room will need a bit of everything to achieve success.

He also accepted that tough decisions lie ahead; a possible hint that some players may have to go if he’s to get the squad where he wants it to be.

“You have to find a squad balance, so that you have a bit of a mixture of everything,” he told his pre-Sheffield United press conference.

“First of all; what type of personality are you signing? Do they fit with your club culture? Yes? That’s the first tick.

“After quality-wise, what do you need? You need physicality, technical ability and specificity for certain positions.

“From then on, you need to make the right decisions. Some of them are tough to take. Some of them people won’t understand them, but when you have a clear plan, that works.”

While Unai Emery seemed more than happy to defer most of the responsibility for recruitment to the football executive committee, it feels like Arteta is not willing to be sidelined from the process. That may not have been immediately apparent given the business done in the month after his arrival, so it’ll be interesting to see how it pans out this summer.

The big elephant in the room is how much cash the club will have to play with. Not qualifying for the Champions League will be a blow. That will be compounded if there’s no European football at all. Throw into the mix the uncertainty around matchday and broadcast revenue while Covid-19 is still a threat and it means conversations with possible targets can only go so far.

While there will undoubtedly be some comings and goings, it means there will be pressure to get the current squad to improve.

“We will see what happens [in the transfer window],” said Arteta. “I’m really happy with the players I have at the moment and the way they are developing.

“Do we need to improve our squad? The answer is yes, of course we do.

“But first, with the players that we have, right now, here. Then we can go in the market and recruit and make some changes and find players that going to help them even better and it’s going to quicken the process, great.”

The problem is the Arsenal board is far from being anywhere near as good as FSG.

Sure got a couple of billion pounds to spare?

did Arteta back the re-signing of David Luiz?
seems Kia is the scapegoat for everything

Publicly he did. Kia did nothing wrong. He just does what is best for him and his clients. The problem are the people inside who let super agents to control the club.

The fact of the matter is Arteta has gone out of his way to praise David Luiz. This is from an Arseblog post before the City game:     Asked about the Luiz situation ahead of Arsenal’s clash with Manchester City, the boss said: “I’m really happy with David, I want to keep him here with us. He’s been a key role model for me since I joined. “I like what he produces on the pitch, I like his influence around the players and around the club. I would love to keep him.”       This is from an… Read more »

All this nice recruitment process elicited by the coach ended up so far with offering a contract to Luis.

I am quite sure that if we didn’t resign Luiz for the second year we would be paying some sort of compensation for the option not taken ! In that case for a marginal cost we could be having an experienced played useful when playing back 3 and invaluable on the training ground !

We all know Luiz isn’t good enough for where we want Arsenal to be – far too error prone. But I can see reasons why Arteta wants to keep him now in the circumstances: (1) For his leadership qualities. (2) To play out from the back – he gives us another option tactically. (3) Realistically, the alternative options are Mustafi and Sokratis, which also aren’t great. Signing new players in Covid times will be hard. (4) If we sell Mustafi and Sokratis now (instead of letting them leave for free next year) we might get a small amount of cash.… Read more »

I also feel any of our CB transfer should atleast wait till they take a look at Saliba during pre season.

Sokratis and Luis are essentially stop gaps and one should be off loaded but we’re in real uncertain times and there’s no telling what our financial situation is. This can be said of a lot of other teams as well.

﻿Would anyone have to money to take our deadwood off us? Assuming financially hit teams are going to be the majority of small teams which are the ones will be marketing our deadwood players too.

“Tough decisions” in transfer market? I have been waiting for that.

Judging by the contract extension given to Luis, his axe seems like some sort of Dollarama plastic toy.

He’s not just swinging around wildly

Did we really need to sign Luiz? And since we did, I’m pretty sure Sokratis is leaving for next to nothing this summer. Would be over the moon if we got even £7 mil for him.

Sok has been rumoured to be moved on a couple of times to be honest. And if we get that amount for him I would take that.

This side needs overhaul- get all the whining, underperforming prima donnas and give them a bus ticket. Wholesale changes need to occur for any improvement to happen. Here’s to hoping They do it

Agree there. Let’s get the type of ruthless players we loved from the good old days. Let’s get a Vieira again and an Adams, players to boss and control the back and the middle. There is nothing wrong with our attacking options, just the lack of quality in between the keeper and the forwards/wingers.

Totally agree, for the money spent the performances are dreadful. Get ruthless. Anybody who is not good enough or not giving enough, or just not providing good value, get them to fuck out.
Really do hope Arteta is going be a great manager, he’s one of the few exciting things about the club at the minute

The biggest thing is just making sure we buy players that fit the system Arteta wants to play. We’ve been all over in terms of the types of players we bought the past 5-6 years which is part of the issue.

This is completely off topic but I don’t understand a lot of the apathy/negativity shown to Sokratis in quite a lot of comments. For me he’s been exactly what we’ve expected from him, an aggressive mostly solid defender. Plus he actually looks like he gives a shit when he plays. I’d have him streets ahead of David luiz or Mustafi yet most people want him gone this summer. Anyone shed any light on this for me? Genuinely interested.

He’s not the best passer of the ball and this is most likely why Arteta doesn’t rate him highly. He’s not the most calculative of defenders and therefore tends to thrive off his physicality and aggression. He’s not the strongest in the air, again another major reason Arteta went for Mari. He is pretty anxious for an experienced defender that should be more calm, composed and be able to organise the back four. Having said all that, for his qualities which are Pace, aggression, tackling and passion, i’ll still pick him ahead of some player who says his contract situation… Read more »

just at chelsea he got away with everything.

Yes I agree. I thought he has been the best of a bad lot over the last couple of seasons. He has real pace, which belies his physique, and is aggressive without being stupid. Sure, he’s no Van Dyke, but in our financial position we could do a lot worse (Luiz, anyone?).

You have a loose definition of “mostly”.

A lot of tough decisions have to be made. They may not seem financially sound short term, but may be what this team needs long term. They have to get rid of a lot of salaries by selling some players at a loss. They may have to pay Ozil off or let him run down his contract. They may choose to let Aubameyang and Lacazette go for lower than their value. On the long run, they will get a handle on the salaries. On the incoming talent, they definitely will have to outsmart the market or have a significant cash… Read more »

This is exactly what I wanted to hear.

“The big elephant in the room is how much cash the club will have to play with.”

This has been the question that we need to have an answer every year.
And we all know that Kroenke refuses to invest so…
Good luck Arteta! Your project looks promising but Kroenke ain’t John W Henry.

So what phase is David Luiz in? What boxes did he check to get a new contract?
Good defender?
Smart?
Lasts 90 min on the pitch?
Does Arteta think we are stupid? He talks a lot, he knows how to say the right things. But the actions are what make the difference.

Willing to give Arteta time. Talk is cheap though as that oily tick Gazidis showed us. I still have no idea of the footballing identity of the side and frankly performances are no better or more coherent than they were under either late era Wenger or the whole of the Emery debacle.

I think the last use of the phrase “oily tick” was about 1911. Well done. And what a deserving recipient in Ivan Gazidis.

It seems like he is talking about Guendouzi leaving, the way he talks about making tough decisions on the squad and lists “personality” as the number one characteristic.

Or maybe I’m paying too much attention to the gossip rags!

Even Laca or Mesut

Or more worryingly than them 2 is Auba.

He talks a really good game. Will be interesting to see how ruthless he is with the present squad and whether his faith in certain players pays off. Crucial year for us squad building wise with so many player contracts up for renewal in 2021 and 2022.

For Mustafi, Xhaka and Lacazette we could get a decent sum. Add Sokratis, AMN, Elneny and Chambers to that, and maybe even Torreira, considering he wants to go back to Italy, we would have some serious cash to work with. Too bad the market could be pretty bad considering the corona-crisis.