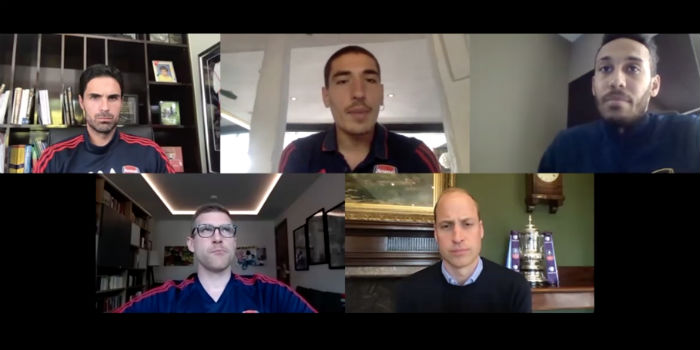 Hector Bellerin admits that conversations about pay cuts were tough but he believes the squad and the club as a whole have come closer together as a result.

The Gunners remain the only club in the Premier League to strike an agreement with their players about a cut with Mikel Arteta’s squad agreeing to a 12.5% reduction in their wages for a period of 12 months.

While there are performance-related clauses that can see that percentage reduced, it’s estimated the agreement could represent a £25 million saving in total.

As the club’s PFA representative, the Spaniard headed up negotiations on behalf of the players with most accepting the final terms.

Speaking about the situation in a Zoom call with Prince William – organised to raise awareness of men’s mental health – Bellerin said:

“We’ve gone through some tough conversations as a team and as staff members with the pay cut we had to decide between us.

“We all did this for the good of the club and the people that work for the club.

“I think, and I don’t just speak for me and Auba, but many of the players and the coaches, we got many messages from the staff saying they now feel safe and that they can still work and get paid.

“They are situations that could build negativity but we found something positive in it and it’s brought us together as a family.”

It remains to be seen whether other Premier League clubs follow suit. While the Gunners hierarchy were quick to foist the issue on the first team other clubs have been more patient and have waited to see where the chips fall on the money front.

With matches set to resume next week, the top flight looks increasingly likely to escape the financial apocalypse of an abandoned season. It could still happen if there’s a second wave of coronavirus but the collective will to complete the campaign appears strong.

There will still be losses, of course. Clubs need to rebate broadcasters around £330 million in total and the loss of matchday revenue from now through next season is potentially huge. It’ll be interesting to see if sides on an equal financial footing go cap in hand to their players or try to mitigate losses elsewhere.

It feels quite odd that we are the only club to have a paycut .

Because the players are overpayed and the club used the opportunity to cut down on wages.

We are on a champs league wages with a championship squad.

Not sure why so many down votes. That’s pretty much spot on (well maybe they are Europa players on CL wages). A smart piece of opportunism by our glorious leader.

Martin, don’t try to be that wanker who corrects everyone. English is not the native language for everyone. There are Arsenal fans all over the world, and they try their best to communicate here. You go on an Arabic, Thai, Hindini, or Chinese site, and let’s see if your f*cking grammar is perfect, or event try to write two words.

It’s spelt even. My main point that he was talking rubbish.

I’m not sure how you can equate our Club to a Championship squad. We are still in the top league and not in a relegation battle. Yes, top flight players are overpaid but it does not mean that we have to denigrate the quality of our side. How many players of Auba’s quality are playing in lower divisions?

With an owner getting an increase of 270$ M of his fortune since january.

Not just that, but how quickly the club demanded it happen.   A few months down the line when everyone’s struggling because of lack of income, you can see how it would go down at Arsenal and other clubs.   But literally within a couple of weeks of lockdown, KSE and the executives were pushing this.   Hector is a good bloke, and Arteta has led by example, but I can tell you this has caused problems between the squad and the people running the club.   When you want Auba to stay and sign a contract, when you want… Read more »

In fairness to the club though, were they not just following what had happened in Europe? The premier League afaik is the only major league where pay cuts aren’t the norm rather than the exception.

Can our players really feel hard done by when the majority of their colleagues around the world are in similar situations?

Fair point, but I guess you have to judge it by Premier League standards.

The reason why players get the money they get is that football generates massive money and they are the ones giving the show. During COVID-19 there were no games. Players shouldn’t be paid for that period just like circus acrobats who didn’t get paid.

You have to judge whatever by your own Ship’s standard. Different strokes always

The owners have thrown the players under the bus a few times over the past few seasons. it wouldn’t have surprised me if they had rejected it a pay-cut, the Kroenkes would have used it justify furloughing staff and maybe even cutting staff. They have enough money to pay both players and non-players and this just furthers my feeling of being suspicious by them.

While I’m practicing empathy and compassion these days, STOP TALKING ABOUT/POINTING AT PEOPLES MONEY. Business is business buddy and you might not agree but Stans desires aren’t any less important than yours because he’s significantly richer. Stans wishes and fears matter, Everybody’s wishes/fears matter, ESPECIALLY in their fucking Business ? They wear the hat, it’s heavy as fuck, they wear the shoes, they know where it pinches financially. We’re largely just watching the dance and become emotionally-attached ?

Disagree. It’s an organisation, if there’s an elephant in the room it should be handled pronto while leaving the option to edit stuff considering there are always many ‘unforeseens’ . It’s not as if they pledged sth permanent away, I’d imagine that if something big changes they will get a revision. Everybody needs to trust the captain (Mikel) of their various ship ? even when you don’t see why he’s given you a certain directive, it’s why he’s the captain. More families will stick together when the captain is able and trusted. Not for the wife to decide that her… Read more »

Some clubs might be taking financial hits in other ways, Liverpool missing out on Werner for example. But if Swiss Ramble is anything to go by we were in a particularly precarious position. CL wages with Europa League income.

That’s good, the club have the players are overpayed and the club used the opportunity to cut down on wages.

We are on a champs league wages with a championship squad.

You were wrong the first time and you’re wrong this time.

*in line with our status and for some of those arguably not even in line with their status.

Ozil, Auba, Laca, Mhki are all on 200k or more with Ozil being the obvious outlier.

I don’t think the rest of the squad is an issue, maybe David Luiz according to Amy Lawrence but really it’s those 4 that are the “CL earners” and in my opinion only two of them (Laca and Auba) are worth to even be kept at the club.

Isn’t anything over 80 ,k a week champ league wages. If you look at wages for champions League teams in German or Italy .Portugal,french ( maybe not psg) ..e.g. Dortmund., Schalke , Lyon , Marseilles, inter. and most players at Bayern on 80/90k with a few exceptions like Rob.lev.
So 75% of first team squad on 80k plus
If am wrong someone correct

In hindsight its a bit embarrassing we were the only club to push through a paycut. Its makes little difference to the club overall as we’re never going to go bankrupt and if anything, makes buying new players ( funny I know) or improving contracts to existing players difficult to justify in the eyes of the existing squad.

It’s an interesting line of thought. Kroenke is obviously in a position to fund the club ad infinitum. Were he to choose not to, and the club ran up sufficient losses that it became insolvent, could the club simply fold, or would there be an Usmanov character in the wings to absorb the debts and keep it afloat?

His money is tied in several investments, one serious tragedy in his place of business and it seriously devalues. No such thing as ad infinitum, but if Arsenal were to come in the market I’d expect there won’t be a shortage of buyers

Really hope the unity of the squad will see us well during final part of season.
Thought on transfers: if we could manufacture a swap deal for Lacazette and Partey, and sell Mustafi, Sokratis, Mhkitarian, Xhaka and Elneny and use funds to bring in Upermacano, I would be happy if that’s all the business we did. Could give youth a chance elsewhere and build around Saka, Willock, Martinelli, Nketiah, Pepe and Nelson. What do you think?

We need at least Xhaka to stay.

Why do we have to reimburse broadcasters when we are finishing the season?

The Martinnelis
Reply to  Dave

Good question especially they will make even more money than usual. With Fans watching from home

Good question and a puzzle to me as well.

I imagine it’s because the ‘product’ they’re paying for isn’t the same without fans in the stadium.

In the same way that online teaching by universities isn’t the same as face to face teaching for us students, they won’t reimburse our tuition fee accordingly though and the government doesn’t care about helping students out with this.

Frustration aside, that is to say that you get what you pay for and of you’re product is different to what was agreed then you have a right to get reimbursed.

That would be first and only time the broadcasters have given a single fuck about the fans.

Why is Prince William on the zoom call?

myrtle
Reply to  The Martinnelis

He’s got his clock out as well.

Such a philantropic Prince, raising awareness of men’s mental health; I wonder if he spoke about the effects of the lenghty -but oh so necessary- lockdown in that regard…
Anyway,if it wasn’t for Arteta, I’d be very worried for the Arsenal. I hope he has a decent contract!

Arteta is a businessman, a capitalist, he’ll get what he’s worth, especially in due time (when no one can pretend he’s a rookie any longer). Currently on around 5 million ??? Klopp is on closer to 20M (some source )

Bellerin is insufferable and a prime example of the Dunning-Kruger effect.

Bizarre thought, I think he’s come out of this looking like an upstanding member of the team.

The guy obviously cares deeply for the club and his colleagues and seems like an all round top bloke, doesn’t give the impression of thinking he’s amazing at all?

People always looking down on a guy with his head down doing a great job. You should re-evaluate your various intelligence quotients if he fooled you into thinking him a simpleton. He’s an exemplary empath. ‘Looks are deceiving you’ (Damien Marley song)

Anyone else think Hector has good intentions but is pretty naive?