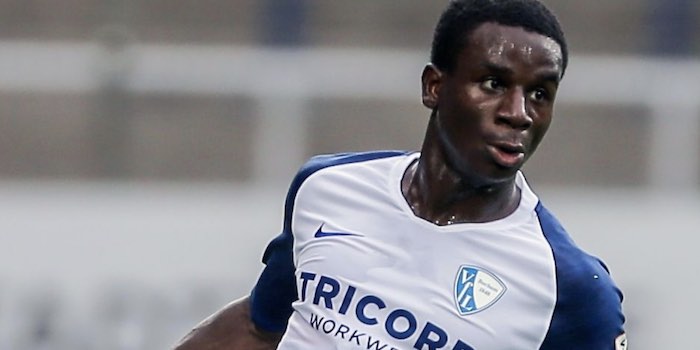 Jordi Osei-Tutu’s loan spell at VfL Bochum started in awful circumstances when he was racially abused in a pre-season friendly against St Gallen.

Osei-Tutu was left visibly upset by the incident and walked off before returning to the pitch to play in the second half.

Since then the youngster has worked extremely hard to make the most of his stay in the German second tier and has concluded the campaign in a rich vein of form which has led many to suggest that he could have a part to play for Arsenal next season.

After the aforementioned incident, Osei-Tutu vowed that he wouldn’t prevent it from stopping his progress on loan.

The youngster went into this season without any experience of competitive senior football, but, with one game remaining, he has played 20 times in the league and has demonstrated his versatility.

Osei-Tutu endured some difficult moments in the early stages of his loan. Mainly deployed at right-back, he performed rather well in an attacking sense but there were concerns at Bochum about his defensive capabilities.

As a result, he found himself named on the bench and even left out of the squad on several occasions, and at one point it appeared that the best option may have been for Arsenal to recall Osei-Tutu and send him on another loan elsewhere.

Arsenal will certainly be thankful that they didn’t make that decision as Osei-Tutu has been in outstanding form of late, particularly since the restart.

Now used as a winger (the position he played in for Reading prior to joining Arsenal), Osei-Tutu has demonstrated that he is capable of making a major impact in the final third.

In his last ten league appearances Osei-Tutu has scored four goals and provided three assists, while many of his overall performances have been of a very high standard.

At times Osei-Tutu has drifted across to the left flank and he is now so full of confidence that he won’t want the season to end.

There is one more game remaining of Osei-Tutu’s loan spell – away to Hannover this weekend- and after that thoughts will begin to turn to what the future holds for the talented youngster.

Osei-Tutu has been on the bench for the Arsenal first-team and has featured in pre-season fixtures, but he is still awaiting his competitive debut. The 21-year-old has certainly given Mikel Arteta something to think about, with his ability to perform impressively in various positions meaning he could be a useful asset.

Even if he isn’t afforded an opportunity at Arsenal, Osei-Tutu has certainly done enough to earn a chance elsewhere, and he has demonstrated that he can cope with the demands of senior football, albeit in Germany’s second tier.

After the way in which his loan spell started, to conclude it in such a positive manner is testament to Osei-Tutu’s character, and he now appears set for a fruitful career, whether at Arsenal or elsewhere.

Well done to the lad for showing real strength of character under such trying circumstances…he sounds just like the sort we need at the club. Failing that I live in Reading and would be happy to see him return there.

So so pleased for Jordi!
He’s shown such strength of character in the face of the abhorrent racism that he suffered in his first game for Bochum.
Then again when he couldn’t get into the side after struggling defensively he’s worked hard on the training pitch and forced his way back into the side.
Now the very least he deserves is a chance to prove himself with our first team. I just hope that Mikel Arteta and his coaching staff can develop him further and then we could have a real player on our hands.

I watched every game his has played(since the restart) and I must say he’s really turning in to a quality winger. He’s actually showing more fight and spirit than our current arsenal-players.. We also need a goalscoring midfielder or winger..

Hopefully we’ll give him a chance.. If Arteta tries Ainsley Maitland-Niles in the CM position, Jordi can get some opportunities on the wing.

Interesting and insightful comment.   Its odd though at Arsenal now, isn’t it? Lots of wingers (Pepe, Saka, Nelson, maybe and OT). But, we’ve not a single deep lying play maker or attacking midfielder – bar Ozil, that’s worth a damn.   Xhaka – no. Guendouzi – I’m with Blogs on him; not convinced yet. Ceballos – no. He’s not staying in any event (why would he swap Madrid for the shite show that is current Arsenal?) Willock – not yet.   Perhaps Laca could play behind Auba as what, a false 9 or so? But that still leaves a… Read more »

Emre can also plays in the german league

Since his loan ends after one last game, can he then rejoin Arsenal for the rest of our season? If he is playing well, might be worth giving him some playing time at some point this season to see what he can do against tougher competition.