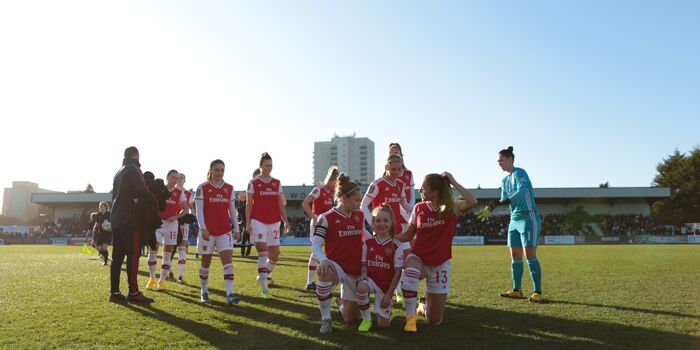 UEFA has today announced that the Women’s Champions League will be concluded over the course of nine days at the end of August. Arsenal have a quarter-final tie to play against Paris Saint Germain, originally scheduled to take place over two legs in March.

The tournament will resume in San Sebastien, with the quarter-finals played on 21st and 22nd August, the semi-finals to take place on 25th and 26th August, with the final in the Anoeta Stadium in San Sebastien on August 30th. A draw will take place in Nyon on 26th June to determine the order of the games.

This means the quarter and semi-finals will be pared down to one leg, so the Gunners will take on PSG on either 21st or 22nd August. The winners of this game will play the winners of Bayern Munich or Lyon in the semi-final. The full quarter-final line-up is below:

🏆The #UWCL quarter-finals, semi-finals and the final will be played at the San Mamés Stadium in Bilbao and the Anoeta Stadium in San Sebastián from 21 to 30 August (final at @RealSociedadEN)

The problem for Arsenal is going to be squad size. UEFA has decreed that any new players not registered at the club on March 18th won’t be able to take part. Arsenal will have a number of players arriving at the club this summer who won’t be able to play, while the likes of Katrine Veje, Emma Mitchell, Louise Quinn, Pauline Peyraud-Magnin, Ruby Grant and Silvana Flores already gone and at least one more squad player poised to follow.

The new rules allow for 5 substitutions to be made but Arsenal almost certainly won’t be able to field 5 substitutes with their incoming players not allowed to take part. Caitlin Foord was signed in January and can be added to the squad, after that, Arsenal will probably add some academy players with no first-team experience.

Winning the tournament is now Arsenal’s only chance of qualifying for the 2020-21 competition after the WSL was decided by points per game, leaving them in 3rd spot outside of the qualifying spaces.

UEFA think that’s fair do they knowing full well that many players’, probably not just at Arsenal, contracts have expired and have moved on have now missed the opportunity to play in the closing stages of the Champions League. It would have been much better just to knock it on the head for this season since apart from the eventual winner, who have probably already qualified for next season’s tournament unless it is us, the final placings are meaningless anyway.

Roll on 2022 when Chelsea, Man. City and Arsenal will all go through unless Man. Utd. improve considerably next season!

You are keeping very tight lipped on the remaining squad player(s) who are in the frame to leave, Tim, but we may need them to sign temporary contract extensions just so that we can field 11 players against PSG never mind find 5 substitutes!

I think our squad will be ok for these games, at least in much better condition than it would have been in March. Still besides Louise none of the outfield players who left, played any games last season. In march we wouldn’t have had Kim, Dvd, Lia, Beth. These are much more important than those who left. Manu, Lisa, Leah, Beats, Katie, Lia, Kim, Jordan, Dvd, Viv, Beth/Caitlin is very, very good side. Besides Jill, Leonie, Viki (if she stays), Caitlin/Beth is okay substitutes also. Our squad was not that thin as we often make it out to be, we… Read more »

Would never happen in women’s football- no player would risk their next contract for one week of football. The domestic seasons start in the first week of September so their new clubs wouldn’t let them play. For this to happen, they’d have to basically agree to not have a club for a year.

I personally love that. It gives us the reason to get our team to top shape for the start of the season. Rumors are that remaining FA cup fixtures will also be played in September. Lot of stuff to play for early on, I think it will be big motivation for our players. And all the squad problems that we will have, other teams will also have. Lyon, Wolfsburg, Bayern all have squad rotation that they need to manage for these games.

@Tim
Can you give us a hint as to who the club are looking at? Even just their position would be interesting. I saw you mentioned Maritz(sp?) and Gut. A couple more at least, I hope…

Well, apparently Lucy Bronze is going to be in the FA WSL next year, so she is up for grabs, unless she’s already made a decision about where she wants to play. Somebody on another site mentioned that she’d been training at ManCity, and he think that’s the club she’ll sign with. Wouldn’t surprise me at all. I figure she’s too pricey for Arsenal.

I wouldn’t want her – not on footballing grounds, obviously, but I haven’t forgiven her and some other members of England Women for turning on Eni Aluko. Not a fan of Aluko as a player, but I think she was very shabbily treated by the FA.

I think Lucy was always going back to City, after deciding to move on from Lyon. I would have her, but I am not too bothered same time. I have seen England play with Lucy as RB and Houghton as RCB enough to know that they don’t really work together. She is not the player to raise their level massively. Marozan would have been different story.

Lucy is possibly the best attacking right back in the world but quite honestly the way Leah plays, and with Lisa and Leonie already looking after that corner who are both better at running forward than putting their foot through the ball and the opposition attack, what we really don’t need is another nominal right back who is AWOL when the opposition counter attacks.
Perhaps a Jen Beats clone that likes to fill the right hand side of the back line would be more appropriate if anyone knows where we can find one!

Potentially, playing 3 BIG games in the space of 8 days with a squad of 13 senior outfield players is imo “a bridge too far”. Four of these athletes are still in recovery from long term injury! Even if the outfield squad is bumped to 16 with the inclusion of Viki, Dan C & Mel Filis, Dan hasn’t kicked a ball in a competitive match for over 2 years.
You can’t fault the team for skill, effort and fight but to pull this off on these resources? Really?

It’s just another crazy decision by UEFA and there’s not even the financial incentive this time. All we can hope is that the opposition are in a similar state of fitness and squad transition.