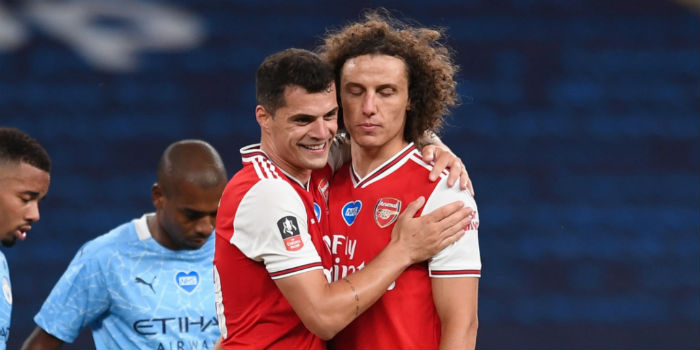 Mikel Arteta says he’s pleased that David Luiz was able to put right last month’s nightmare performance against Manchester City as he led Arsenal to a clean sheet at Wembley that helped secure the Gunners a place in the FA Cup final.

With his head frazzled by contract talks, the Brazilian accepted responsibility for the Gunners 3-0 defeat at the Etihad in June after a comically bad 21-minute cameo that saw him gift Pep Guardiola’s side two goals on the way to a red card.

Tonight, he delivered a defensive masterclass as Arsenal upset the odds to beat City 2-0. The boss was delighted by the turnaround.

Facing the media in his post-game press conference, Arteta said:

“Any doubts about David’s reaction is unearned in terms of after that game [Man City away] and he didn’t have to do that because we all make mistakes.

“But the way he’s been training and helping each other has been phenomenal and I’m delighted people can now see this side of him as well and I praise him because he deserves that.”

Asked if he’d had to manage Luiz through the fallout from the last game between the sides, Arteta went on:

“Yes but David doesn’t need a lot of management. What he needs is that he trust him and we don’t doubt what he can do.

“The best way to do that is to make him play and he can take that. He’s done it through his career.

After the game, Luiz said he used his previous experience to stay humble in the face of criticism and noted that “football is about survival.”

The Ghost of McManaman

Honestly, this is what you get with a player like Luiz who has undeniable amounts of talent but that Shkodran Switch which just goes off every once in a while rendering him looking defeated and silly. Let’s hope he’s turned a corner post that first City game, continues to be a mentor to the young ones and keeps the number of gaffes to the bare minimum. Besides, with Auba and Laca on current form, we’ll be able to score enough to cover those mistakes up. COYG!

Adiddledog
Reply to  The Ghost of McManaman

If only McManaman were an ex-parrot.. unfortunately I think he’s merely pining for the fields.

What a brilliant man manager. You can see the love and respect for Mikel in the player’s reaction to him at the final whistle. Something good is building here …

Luiz played excellent. As fans we simply want that level of commitment and organisation every game. We know the odd error will occur and that’s fine but when those errors start stacking up (from him and others) it does get very frustrating.

Anyways, what a dreamy feeling this morning, a quite magnificent performance from Arteta and all the team yesterday.

I know this guy personally from my place of work, and I can honestly say he’s is one of the most down to earth guys you could ever meet. A big personality and has time for everybody regardless of your position. There is a reason why arsenal need people like that in the dressing room, to keep the young lads grounded, obviously it helps if he plays like he did tonight.

Wow…….that puts perspective on it Jordan.

hands down the reason we signed him. We were lacking big personalities in the dressing room.

We are all humans, including football players. It seems that he, Luiz, is one of the really impressive ones. It also appears that Arteta is one of those who inspires others of the highest caliber. I can imagine Arteta in a team speech….” we need to win and earn the appreciation of our fans. At the same time understand 2 things, 1) I have your back if you do not quit on me and this team. 2) some fans are idiots and will throw you away like trash no matter what your history has been….ignore the idiots and let’s inspire… Read more »

The way Luiz has bounced back..
Immense respect for him!

Luiz was a rock yesterday – I hope he keeps it up.
Tierney is looking a great signing for £25 million.
Overall a brilliant nights work – lets hope Arteta gets the money he needs..

Great performance from Luiz last night. Finally showed in a red and white shirt what he is capable of. He needs, however, to do that on a more consistent basis. Can he reproduce that in the Cup Final? For me, the jury is still out.

And you need a season ticket at White Hart Lane

I believe Ozil refused a pay cut, the only teammate who did. Football is a team sport and that drove a wedge between teammates that Arteta had to address. Arteta seemingly has made it clear….we are a team that must be willing to suffer together. Ozil made another choice.

The player had a legal right to refuse taking a pay cut and exercised that right. Why should he be punished for it? And after being frozen out, I can’t say I blame him for not taking said pay cut. Absolutely disgraceful way for the club to treat him. I for one wish him well, although a vast majority of the fan base now hate him – in spite of the fact he helped us to win three FA Cups. Money aside, I bet he can’t wait to leave.

A final at Wembley makes up for that first performance after the restart.

Hope he continues it for the next 3 games and he ends his first season with a trophy in his locker.

Luiz may not be the captain, but he has an important influence on younger players. He is like the team captain behind the scene and a great character to have in Arsenal. Minus those silly errors and he will be great. Hope that happens next season.

He was so good I thought Guendouzi was back in the side, and they were both playing.

I thought I would never say this, but I’m actually glad we have David Luiz at the club. The commitment and drive he has to change, and if necessary learn from his mistakes. Just look at what he had to say after the final whistle.
https://www.youtube.com/watch?v=pyeUC8ZeffM

Our young goons have a lot to learn from our old veterans.

I cant believe the last time i felt this happy mood..i so much love the oneness in the team. I know this is the beginning of greater things ahead..Even MUFC and CFC were busy praying for Arsenal to win, hoping for an easy final. we need to win this FA using any means because we’ve tried. UP Arsenal

Luiz and Saliba could click and potentially be very decent next season.

Put him and Mustafi back in a 2 4 2 line up and they’ll be a disaster. They were brilliant against City but knew what was coming. Different when we’ve got to go and attack teams. That’s why defence and midfield still need strengthening