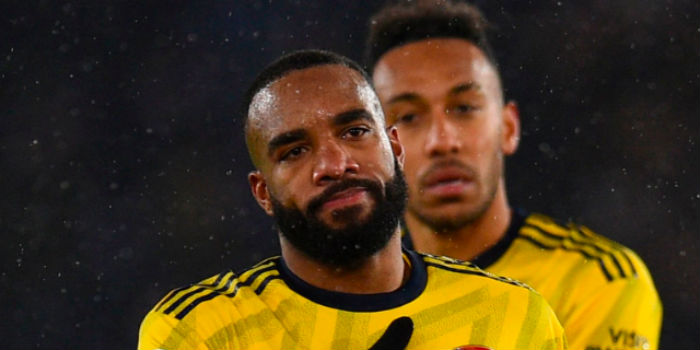 Mikel Arteta says Arsenal need to sit down with Alex Lacazette to discuss his future at the club but that won’t happen while the games are coming thick and fast.

Like strike partner Pierre-Emerick Aubameyang, there’s been plenty of speculation about where the Frenchman might be playing his football next season.

Atletico Madrid are long-term admirers and it’s said we could be tempted to sell to raise funds to strengthen other areas of the squad.

Voted Arsenal’s player of the season in 2018/19, Lacazette has struggled for form this year but still has the respect of the boss who loves his attitude.

“We have to have a chat about the next step with him and get his ideas and his feelings,” Arteta told his pre-Leicester press conference.

“As I said, I am really happy with him. He’s a player that I’ve always liked, even when I wasn’t here, because of what he brings to the team: his qualities, his ability, his work rate.

“So let’s see. Now we are in a crucial moment [of the season]. It’s no time to talk about a lot of contract situations. We still have time and we will do it in the right moment.”

The club are known to have opened negotiations over a contract extension during Unai Emery’s spell at the club but negotiations didn’t get too far.

Lacazette’s current deal ends in the summer of 2022 so unlike Aubameyang, who could walk away for free next summer, we do have a little time to either get an extension sorted or to sell him for decent cash.

Sell and give the money to Auba. Simples.

Sell Auba and reward laca for just be a better footballer

VAR will solve the problem
Reply to  azurelas

It might come down to whether Atletico would sell us Thomas Patrey. They need a striker and they always wanted Lacazette. Lacazette does fit the bill of Diego Simone…Always working hard and pressing and a cool finisher. They havent had much luck after Costa the Cunt lost form and Griezman left. Lacazette is one of my favorite player but if MA needs to prioritize midfield then Thomas Patrey and 40 mill cash may make it a satisfactory deal for me. Or just keep him for a year. He is at the right age to hit the peak. Sell him next… Read more »

Haldi
Reply to  VAR will solve the problem

They have Diego Costa, jaoa Felix. That ship has sailed.

Danny
Reply to  VAR will solve the problem

Partey and 40 million for Lacazette? Are you serious? Perhaps a straight up swap deal if we’re lucky

VAR will solve the problem
Reply to  Danny

A man can always dream/wish for things. Are you telling me Santa is not real?

Martin
Reply to  VAR will solve the problem

If we dont qualify for Europe, we might have to think about our squad size. We should send Willock and Nelson on loan to the Championship, atleast 30 games guaranteed. Laca is still class, just needs to up his confidence and get good service.

Willock doesnt need a loan, I agree maybe Nelson needs another season but if we give him game time til the end of this one I’m not sure a loan would suit either party next year. Just my opinion obvs 😀

Jeez you couldn’t be more wrong on every point

Which one? Lol
You must be a new fan…or maybe a Chelsea fan…hahaha

Have you seen us play? We haven’t had “new” fans for a fair few seasons.

Wow, so many downvotes for a perfectly reasonable opinion

Unfortunately with most fans here, not all, if you call out the club or demand more you are seen as negative or wrong. People are scared of the facts, the truth, most are unrealistic, and care about getting up votes. If we play totally shit, get lucky and win 1-0, then you can’t mention that it was luck. Gone are the days when we had higher standards from the fans.

Have we not qualified for Europe via FA cup? Mc,mu and c will al qualify via position in league
Is that right?
https://www.premierleague.com/european-qualification-explained

No, places go to next team in the premier league. So unless Arsenal win the FA Cup places are already settled…

However if City are banned from Europe these drop down a place.

So 8th is effectively a Europa League place.

Thanks for that. Me being really stupid and seeing what I wanted to see. Whoops!!

Hopefully Arteta can persuade him to sign an extension.

Expendable in the grand scheme of things.
Auba, Martinelli, Nketiah, Saka and Pèpè is a lethal enough firepower if the midfield is sorted.
Partey, or any other of such, and a replacement for Ozil are all this team need to make a splash next season.

Why would Atletico sell Partey? Because we will offer 100 millions and they couldn’t say No?

Because he hasn’t agreed to a new contract with them, has he.

Because his release clause is less than half of that and he wants to leave?

This very much feels like one of those transfer deals that is already done to me. I think he wants to come to Arsenal and I get the feeling we are making sure it happens.

I think we should do anything in our power to get either Partey or Konrad Laimer for RB Leipzig. This guy’s pressing is out of this world.

As an Arsenal supporter who should be the manager of AFC, and have all the inside information on Lacazette, I actually know what the right decision is.

If we had proper owners who invest in the club we would keep him and all our other forwards and seek to build on that foundation. But we have the leech that is Kroenke and his gang of useless c*nts, so they’ll probably sell and waste the money on someone Jia, Mendes or some other shady agent wants to offload.

Can you send me some of the stuff your smoking?

He was player of the year last season I suppose but not sure we’ll ever see that player again.

And aubameyang has scored more goals. Which is more difficult.

Love that he puts in loads of goals, don’t get me wrong.

He’s a modern day Pippo Inzaghi with better hair who tends not to fall over so easily. Scores loads of goals, and I want him on my team every time, no question. But let’s be realistic what he actually does, eh?

Mikel don’t play Auba as a striker. That means we either keep Laca or sell and replace with another striker. Eddie will play number 2.

I don’t think eddie’s a right back?

Since Laca cheated on the girlfriend, things didn’t work for him anymore.

Wouldn’t mind keeping him although he’s probably our best shot at getting in a top signing if we can do a swap deal. No chance that there’s the money for another huge signing. Laca might have to make up the difference.

Auba is more vulnerable to leaving. There will be many champions League clubs happy to have him now. Plus he has a season left and at 31yrs IMO its better to sell and reinvest. On a personal level, its his last chance to win things at the top level which we can’t provide for next season. So in all likelihood, prob not staying. Laca we should keep for one more season and see how young prospects nketiah and Martinelli get on. There is also rumours of us tracking Dominic Szaboszlai 19yr old Hungarian attacking mid. He has a bit of… Read more »

Depends on the market. He will be tempted by champions league football and there are teams in that competition who could do with him. Atletico Madrid is one. If we get the right price to help sort our squad out, then I see no problem with it.

I just want to swoop in and say how happy I am that we have Arteta as manager.

Thats all folks. Have a great gooners😁

Me too! Hoping Santi comes joins the staff next season.

Yes get Santi in. And I think Xabi Alonso would be perfect as another addition, as he’s a close childhood friend of Arteta and is now coaching Real Sociedad B and as Cesc said in the podcast with Arseblog, Xabi Alonso was very close to joining us.

Maybe they could be reunited here at Arsenal..

I still think Lacazette has had a decent season. In the league he has a goal or assist every 138 minutes, roughly every 1.5 games. And he works very hard, defends from the front, and gets involved in the build-up.

Perhaps he’s judged harshly because he was so good last season, or because we’ve been so poor this season. But you can see the quality is still there with the goal he scored against Wolves, and actually his stats this season are not so bad.

what is it with people and assist stats. Anyone who watches arsenal will tell you hes not been at his best this season. Hes judged harshly cos this is The Arsenal not some mediocre club, we need our strikers to get getting 20+ goals a season minumim. Im not against him getting an extension but do we need a £40 m striker on the bench? Id like to see us sign someone who gives a different option up front who can hold the ball up and is strong in the air.