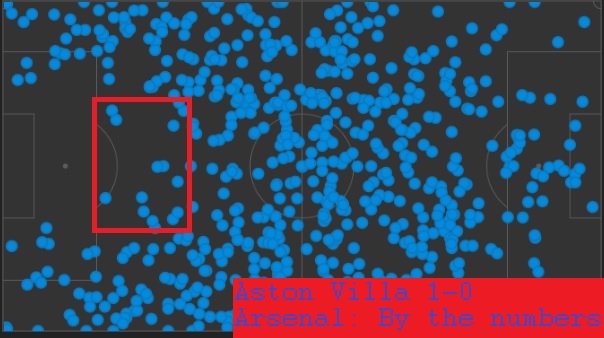 If you are looking for a silver lining from this loss, Troy Deeney is THIS much closer to relegation.

Everything else is mostly pointless after Arsenal lost to Tottenham and drew with Leicester. Basically qualifying for Europe through the League was a long shot and now that is gone. It all feels very 2019 (minus everything else going on in the world) where the chances of finishing in the European spots were up for grabs but things fell apart at the end and the season will end with Arsenal facing Chelsea in a cup final to save the season.

Aston Villa 1-0 Arsenal: By the graphs 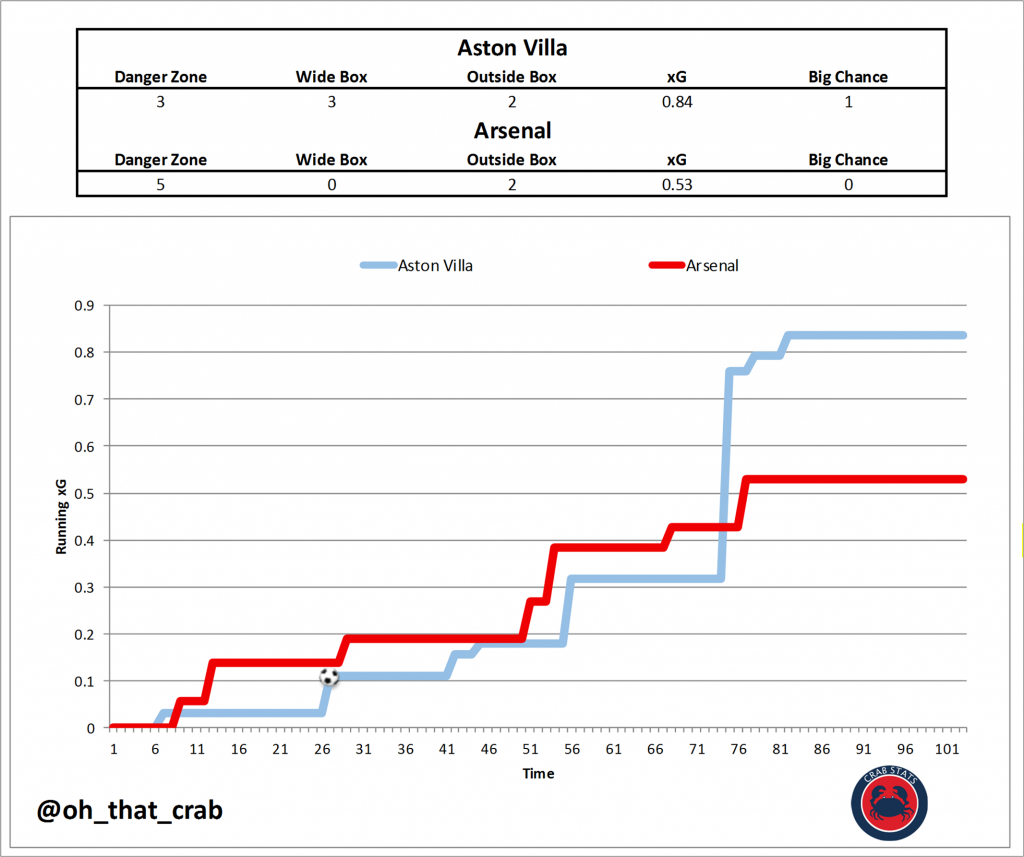 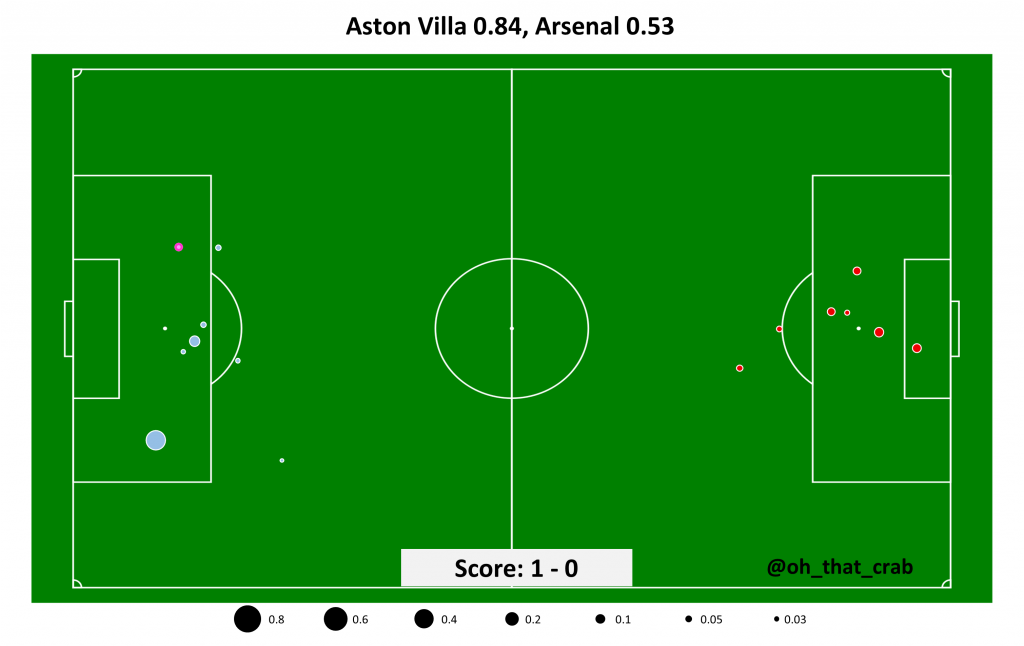 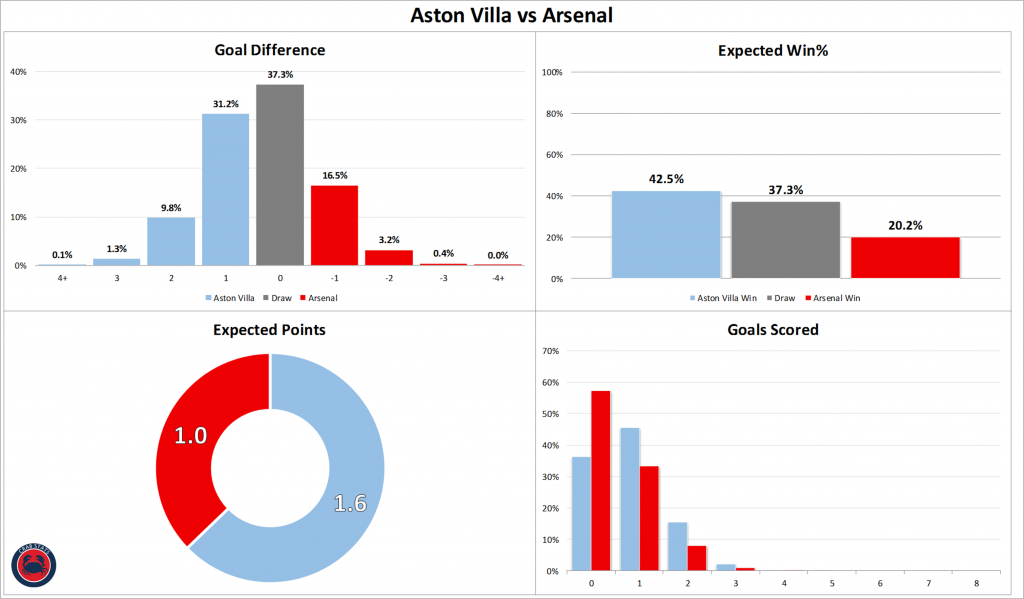 Aston Villa 1-0 Arsenal: By the numbers

186 – Passes attempted for Arsenal in the final third, 63% of the total attempted in the match.

19 – Zone 14 touches, Zone 14 is the area right behind the 18 yard box, aka as the area that Arsenal dominated under Arsene Wenger. 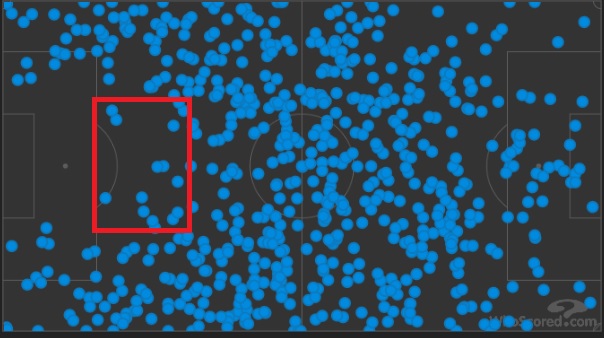 It isn’t surprising that Arsenal didn’t manage many touches deep in the Aston Villa box because one of the things that is needed is touches in the intermediate deep area known as Zone 14. This is the area that Arsenal for years dominated (maybe to a detriment) for years and have now dropped to the middle of the league in touches in this area.

This match was almost the opposite of what Arsenal did Manchester City on Saturday. Aston Villa defended really well and Arsenal did not have the creative players to be able to find the cutting pass that would open up the Villa defense. Arsenal’s first choice in this match was to try a cross versus trying to move the ball to open up passing lanes into the box.

This match also to me really highlights that Arsenal are missing a creative player in midfield. Dani Ceballos has been good at times, but for Arsenal that went from Patrick Vierea, to Cesc Febragas to Mikel Arteta to Santi Carzola the current Arsenal midfield doesn’t have the same technical ability to advance the ball and to create from there.

It is hard to say what will happen going forward with Arsenal, but (hopefully) the majority of points (and the points most often won by Wenger) will be against teams below Arsenal on the table, where the ability to control the match and turn that into big chances will be key going forward.

I am willing to give Mikel Arteta some time, but while it looks like the Arsenal counter attack strategy works well, the sustained possession strategy needs work.

Sources: Opta via whoscred and my own database

Arteta looking for Arsenal to play out from the back more

So frustrating watching the game. Nketiah wide right clearly never worked. If you are going to rotate play the boys in their rightful position.Play Reiss Nelson at least he plays wide right and stick eddie in the middle where he belongs.Mikel said prior to match good chance of finishing league campaign on a high and then plays a totally unbalanced 11 who never managed a shot on target.Last seasons capitulation was hard to take don’t think I could go through that again.

Agreed but apparently Reiss was injured…considering the quote earlier in the week about players playing with injections, that’s probably why Pepe was rested from the start. Do think Ozil should have played, simply for his creativity but y’know, board, blah blah blah

In my opinion, this was a game where we needed someone who could create chances with vision not by just passing over an opposition for Auba to sprint and hit them on counter. Villa were sitting deep to deny our limited midfielders/defenders a chance for a punt over the top. I don’t know what is going with Ozil but this is a match where we could have used him for better as the midfield was grafters who would have helped in defensive duties and would have allowed him the chance to do something. The games against Liverpool and City were… Read more »

2013/14 to 2017/18? Seems like you are trying to avoid mentioning a very big factor as to why that specific period was like that. I’ll just say that there have been changes in central midfield players during that time, but one player was prominent during that period. He even made more appearances than any other midfielder for Arsenal during that period.

Hint: He is still around, but stopped being a regular as off 18/19.

I think we all have to get over the fantasy that we have prime 2015-17 Ozil just hanging around, not getting played. Arteta has shown that 1) any player that buys in and does what is requested is available for selection and, 2) he’s willing to play Ozil as he did prior to football’s stoppage.

You know what the flaw in this “We don’t have prime Ozil” narrative is? A player does not have to be a game changer in each and every game to be good. The judgement of players isn’t based on their best moments or patches of incredible form, its more to do with what they guarantee you on a game by game basis. Once you can analyse a player and find out their strengths and weaknesses, you can then have a realistic standard to judge them on. Example, Giroud. We all know that its not on goals scored that we judge… Read more »

You might have gone a bit overboard there, but I agree with the points in general.

I’d be interested to see whether the Zone 14 touches were above average for the season with Ozil in the team. I seem to recall that we had the same problem with him in the team, under Emery, so I wonder what effect the personnel actually has.

Personally I see it as a tactical issue, as I don’t see why it needs an individual to know they can move into the biggest amount of space available in the attacking third.

I agree with your comment regarding the tactical issue. Both Emery and Arteta are trying to copy what Liverpool did with what they had and later tried to improve. They are trying to copy the press and counter-press thing which basically is not a strong forte of Ozil. But he did show that when we provided him the right tactics it worked fine. (Wenger’s last Chelsea and Man Utd victories)

Fair points Devlin but all the signs point to Ozil not buying in to Arteta’s ‘non-negotiables’.

Anyone who doesn’t buy in shouldn’t be played. Simple as that.

Arteta did play him early and he did play well, but we need him to be committed. He’s not going to be given a free pass like under Wenger.

Maybe Arteta should take a leaf out of Mourinho’s book and play him for 60 min maximum but ask him to give in his all. But to me he is a must against bottom 10 teams who are willing to park the bus.

I have always been a big Ozil fan, and agree with a lot of your analysis. But Arteta played Ozil regularly (and we were a better team with him) before the lockdown. If he is not playing now, it has nothing to do with Arteta’s tactical formation or his estimation of Ozil’s ability. It is either a decision by the club (based on financial or other non-football factors), or an extreme problem with Ozil’s attitude, or something very similar to these issues. I don’t know which, but it is almost certain that it is now irreparable, and we should move… Read more »

OZIL.Do me a favour. Clearly hasn’t got the work ethic Arteta is looking for. Claims he loves the club but willing to sit on his backside and see out his contract.

I just want us to be the best TEAM possible, not just the hardest working team possible. Since Emery arrived at Arsenal we have been the team which has covered the most distance in the EPL, and what has that gotten us?

Work ethic isn’t the problem here now is it?

He would probably have made a difference in this game, but what he posts on twitter and other social networks are obviously different from the level of works and perhaps not in sinc with level the boss requires from every single player in the team. It’s a non negotiable.

Mind you because the magician you are talking about was nearly out of contract 2.5 years ago but NO clubs tried to buy him. No club is willing to pay to buy him now. How come this extraordinary talent is under no ones radar?

Oh btw when you have 5-6 top talents coming from the academy, the work ethic of your star player is a problem.

The only players nowdays who dont defend are Messi and Ronaldo. Ozil is ….just a bit below them in terms of productivity

Always thought ‘who is out there who would come and make us better?’.

It was time to go but the grass isn’t always greener.

I believe in Arteta but we’re a long way from even banter era Wenger’s levels now (final season excluded).

That was the issue with being so reactive and waiting for his position to be untenable. Liverpool fired Rodgers as soon as he started slipping because Klopp was available, whereas we waited as long as we could then grabbed whoever was available and cheap

The difference between Liverpool and Arsenal has to be the board. Liverpool have been dedicated to win and that is visible from the top to bottom. In case of Arsenal the manager and team may have the desire but the board is never willing to listen to the man in charge (manager). Emery wanted a tall, strong tackler, header (Nzonzi) we gave him a short terrier (Torriera). He wanted Ivan Perisic, Yannick Carrasco board gave him Dennis Suarez. It is simple if the board is not willing to listen to what the manager wants then it simply needs to come… Read more »

Thanks for the visual representation of my frustration in watching that match, Scott.

I’m glad I’m not a crazy person to have these thoughts.

I’m sure Elliot will be talking about Zone 14 on the podcast (not for the first time).

I’m tempted to conclude Arteta just wrote the game off as an experiment. All eggs in the FA Cup basket. It causes me almost physical pain to see us so unproductive in the hole (savour that double entendre!) It’s been neglected for so long (ba dump tish!). But seriously…. no dribbling, creativity or end product in the middle for a while now. Dirty Sanchez, Rambo, Santi, Jack the Lad…gone… now we’re so damn predictable. I swear we tried the same shit the whole time, advance up side channels and a cross. Easy as pie for the defence. Otherwise, they were… Read more »