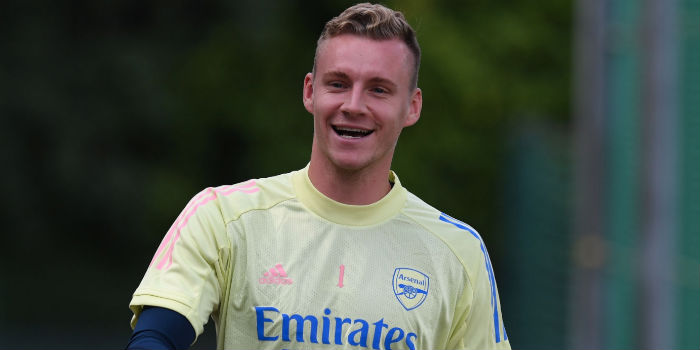 Come for the puerile headline…stay for the injury update.

Bernd Leno has returned to training at London Colney following the knee injury picked up against Brighton.

In its latest medical bulletin, the club reports that the Teutonic glove butler is ‘participating in outside running, with the aim of starting ball drills in the next few days’.

Whether he plays again this season will likely be dictated by Saturday’s FA Cup semi-final clash with Manchester City. If we win, he might have a chance of competing with Emi Martinez for a place in the cup final. Given the Argentine’s form, that would be a difficult decision to make.

Arsenal also revealed that Calum Chambers has stepped up his recovery from ACL surgery. The defender is back running and doing light ball work. While that is certainly positive, it sounds like he’s still got a long road ahead.

The club state he has “the aim of being back to full training as soon as possible this calendar year.” Depending on your interpretation, that could be another five months.

Yesterday we learnt that Gabriel Martinelli would be out for the rest of the year and that Pablo Mari is aiming for a return in September.

Leno: We missed the lucky punch

Martinelli: I can feel my knee is getting better

I’m not a native English speaker but this title is just hilarious.

Has he got the wrong end of following Seaman in the role?

I think Emi has done enough to see the rest of the season through. I think Leno should just focus on challenging for next season number one spot. The news on Martinelli is quite disheartening. I wish him faster recovery than being estimated by the professionals (anything is possible to those who believe). Best wishes to the rest of the injured mates.

Such headlines are what has kept me coming back to Arseblog for a decade or so! ? Take a bow, Blogs! ?

but it’s not blogs it is the other andrew ?

Tell him to take it easy, could cause himself a mischief if he goes too hard at those balls too quickly. Let alone if he plays with Calum, could be double mischief.

Hey man what happens between two consenting goal keepers is none of your business.

Leno was amazing all year bar one or two high balls but he hasnt been missed at all so hughh credit to Emi Martinez . I was going to say I hop Emi does a Fabianski and we win the FA Cup with him but looking back on the Fabi situation in cold light, he made some horrible mistakes in the Semi and we were lucky to get away with it . Really looking forward to the game , team more or less picks itself but I think we will start with the formation we ended against Liverpool with 3-5-2… Read more »

A Different George
Reply to  Rosapirescastle

I am reasonably sure that Arteta kept Mustafi on the bench against Liverpool because he will start against Man City. I expect Lacazette also, because he is our best (only) hold-up forward, and we cannot expect a lot of possession against City. Two outside forwards and none in the middle, as you suggest, almost guarantees that we will spend 75-85 minutes in our own penalty area. If that’s the caw, we could put both Martinez and Leno in goal together and still concede three.

He got some cojones alright.

Couldn’t resist could ya

Even in my 6th decade, a good knob gag in the headline brightens the day.

Martinez has been really impressive for Arsenal.
It should never be that Leno assumes that he will walk back into the team.
Personally I think that this has been a major problem with the club over the last ten years – there was simply little competition for some places which caused players to become lazy and complacent.
This is an excellent opportunity to show no one is safe from being dropped and will provide the competition that is needed at Arsenal.
Well done to Martinez – a real positive from this season…

FFS, I just can’t stop laughing at that headline.

Good thing is we don’t miss him much. So we don’t need to rush him back. It will be good to have him fresh to start the next season.

We don’t miss him at all. Martinez has shown what we have been missing in a keeper since Cech was at his best. Leno is weak at crosses and doesn’t dominate the area in the way that Martinez does. He is definitely no 1

Maybe a little too much information there chief?! ?

Gotta be careful when your headline renders the article pointless.