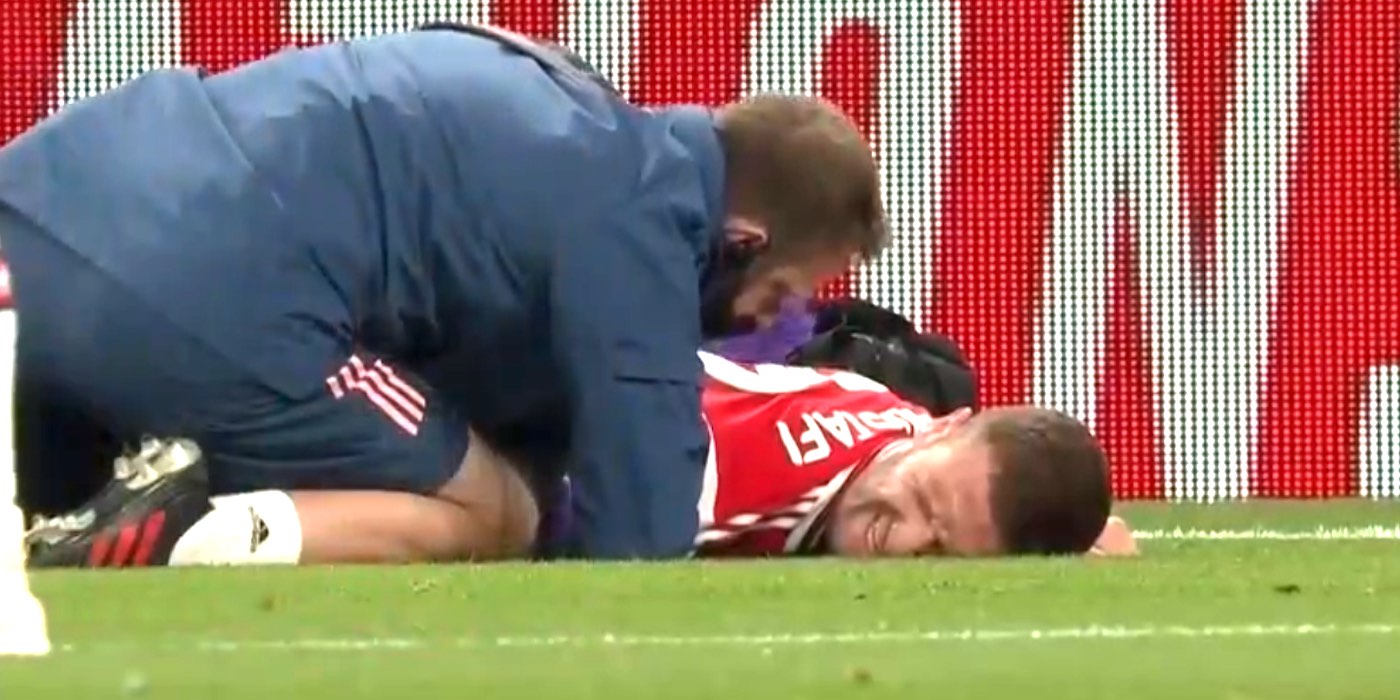 The German picked up a strain late in the 2-0 win over Man City at Wembley, and was replaced by Rob Holding for the final few minutes.

The latest update from the club’s medical team states:

Right hamstring sustained during Emirates FA Cup semi-final on Saturday. Currently being assessed to determine recovery timescale, but will not be available for Aston Villa (a) on Tuesday.

If it is a proper strain, he could miss three weeks at a minimum, potentially ruling him out of the FA Cup final against Chelsea on August 1st. That would be the second time an injury has seen him miss the final, it happened in 2017 as well.

Beyond the long-term injuries, there are no new problems for Mikel Arteta to deal with following the FA Cup heroics, but there are issues of fatigue after what has been a punishing schedule.

There is likely to be some measure of rotation for the game tomorrow night. Eddie Nketiah is available again following his three game suspension, while Cedric Soares could return having been cup-tied at the weekend.

I wld play best Eleven vs Watford, which will be a good practise game ahead of Chelsea. Play all other players vs Villa

We still have a real chance of sneaking in to Europe via the league. If wolves lose to Chelsea and Sp*rs drop points against Palace, it could happen. Not super likely, but for money put the hammer down and try win our last two league games convincingly.

A bit of rotation; start Cedric, Eddie and a couple of others, but I definitely wouldn’t “play the kids”.

Not an unreasonable comment to make considering the game state, it’s not uncommon for teams to milk injuries when (Rob) holding on to a lead. It’s a pretty wild leap to assume anti-Arsenal bias because of that

Ya gooner
Reply to  Ringoxiii

Even though anti arsenal bias clearly exists within footballciety

Luther
Reply to  Ya gooner

Anti-Arsenal bias has been going through the roof ever since the mass influx of foreign players at our club. Our players’ desire was never questioned when we mainly had British players, even when those players were more bothered getting pissed at the pub than winning titles for Arsenal – such was their dedication.
Arsenal fans need to unite and support the club, instead of fighting against it and each other. Support Mustafi, Ozil, Xhaka, EVEN Kroenkes, and stick two fingers up at TalkSport, BBC, and Sky.

You’re right about us still being seen as anti-English, and therefore soft and devious by mostly former player pundits. Probably bitter that we raised standards in the English game, and either had to start training properly or were left behind Sadly I think this bias extends to referees too. Rather than big club bias being a thing (though utd & Liverpool get more than their fair share of dodgy decisions), it seems to be the overwhelmingly British (and white) clubs eg Burnley and Sheff Utd that get away with the most heinous shit. Good honest lads, would never intentionally hurt… Read more »

I’m not Kroenke’s biggest fan either, but he owns Arsenal, whether we like it or not, so he’s on our team – Talksport, Alan Smith, Martin Keown are not (literally or in spirit). Can you tell me which human rights abusing autocrat did Mesut endorse, please? Obviously you weren’t referring to him taking a photo with Erdogan (the president of his country of birth), because firstly, that doesn’t count as “endorsing”, and secondly, he’s no worse (but better in some cases) than every one of our Prime Ministers since 1979. Also, your last statement, “Ozil is easily the most damaging… Read more »

With the timing of things, it may be reasonable to consider that. Except it looked like he pulled his hamstring in the challenge and got stepped on his ankle hard and a full weighted knee into the same hamstring by sterling. Anyone that sees that has to understand that he’s actually hurt, bad.

Sterling commited no less than three fouls in that challenge to my eyes. Shoved Mustafi to the floor, kneed him in the thigh and then studded his ankle when getting back on his feet and scuttling off. No card given. We didn’t even get a free kick.

Even when the commentator is an ex-Gunner, he’s biased against us; especially Alan Smith. That man has sold out to the anti-Arsenal media.

Timorous Me
Reply to  Luther

I can’t speak to Smith since I only get to hear him on FIFA, but Lee Dixon does some Arsenal games for NBC and I certainly don’t think he’s biased against us. If anything, he’s grouchy about things, but mostly justifiably so.

Dave cee
Reply to  Timorous Me

Lee Dixon is a good commentator, wish they had him at Sky or BT

Luther
Reply to  Timorous Me

I don’t think I’ve ever heard Dixon commentate on a match, but I’ve never been impressed by his punditry in the studio (check out Germany v England from 2010 on the BBC – pre and post-match analysis). I went to an Arsenal Supporters’ Trust meeting where he spoke. He kept bragging about kicking Ginola all game long when we played PSG in the mid 90s – everyone else found it hilarious, whereas I kept thinking about Eduardo and Aaron Ramsey, and how he’s making hypocrites out of us. Not all of our former players have turned on the club though.… Read more »

Apart from the classic Musti moment at the start of the city game, he has been brilliant since restart.. I really hope it just a small niggle as we look much better with him in the side at the moment.. Would also be big loss for the final!!

What about his Mustafi moments in the Spurs game?

Kane is a great player despite being a spud, he can upset any CB o n his day . Bellerin could have helped mustsfi more

I still think our misfiring forwards were more to blame against Spuds. We should have had a bigger lead.

One dimensional comment – Hector went AWOL in 2nd half and left him to handle Kane 1 on 1… a mismatch on most days.

We have three games for us to win…Let us win them all and make no mistake, they will all be difficult. Two relegation battlers and the Chavs, who are due for a stuffing.

Mustafi injured, damn – the little devil inside me thinks this is a blessing in disguise. Arteta needn’t make any excuses for dropping him now. Play Holding, Luiz and KT and we should be as solid as we can expect for now.

What a time to be alive when Mustafi being out injured genuinely makes me wince. He is usually so robust so would hope it isnt for too long. Equally, i think he is still capable of the odd mad moment. But i think it also leaves the door open for Holding to come in and have another Chelsea cup final game like last time.

He is better than Cannavaro.

Pete saying it for Rob Holding, you know.

Holding to cement his place in the team ahead of another huge FA Cup final performance against Chelski.

I certainly feel that his aerial prowess is going to be useful/needed against Chelsea.

Holding to have another amazing cup final appearance against Chelski then.

Who knew I’d be worried without Mustafi