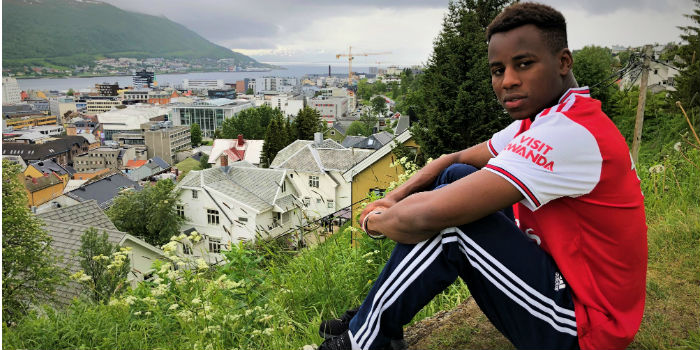 Arsenal have confirmed that young winger George Lewis has joined the club on a free transfer.

The news comes after The Athletic broke the news of two other signings for the under-23s; Jonathan Dinzeyi and Tim Akinola.

All three players were free agents and mark low-risk attempts to give opportunities to players whose underlying metrics suggest they could come good in the future.

Their recruitment, led by Per Mertesacker and head of talent ID, Lee Herron, also allows the club’s Academy to continue to be competitive at under-23 level at a time when many of our Hale End kids are heading out on loan to gain valuable experience at senior level.

Here’s a bit more about each…

The Rwandan-born Norwegian was handed a week-long trial with the club in February but ended up staying two weeks and training with the first team. He’s been waiting patiently for the offer of a contract to be ratified ever since. Most recently, George played for Norwegian second-tier sides Tromsdalen and Fram Larvik. For more detailed background on how he joined the club, check out our exclusive interview feature.

The 20-year-old centre-half joins the Gunners after being released by Sp*rs for whom he made one senior appearance in a pre-season friendly last year. Dinzeyi made six appearances in Premier League 2 last season and also had a spell on trial at QPR. We vaguely remember another centre-back switching N17 for N5 and that worked out just fine. No pressure, Jonathan.

Released by Huddersfield after one season after coming through the ranks at Lincoln City, it’s believed the combative midfielder impressed the club’s video analysis team who suggested making the signing without the need for a trial.

all three are no pressure signings , possibly not ever going to be getting in the first team at arsenal , but if we can raise their profiles and sell them on for decent money and sell on clauses , then could be good business.

Yes, and if they come good and make it for us .. Bonanza!

No pressure for the players but maybe some pressure on the video analysis if they said to sign up a kid released by Huddersfield (after first hand experience) purely on the basis of video.

I hope I’m wrong to be skeptical/cynical about the signing of a Rwandan refugee and his photo having ‘visit Rwanda’ front and centre.

This feels like a very new recruitment strategy by Arsenal – three intriguing looking signatures that will be fascinating to watch develop. ‘Outsmarting the market’? Here’s hoping.

Only time will tell if this is an effective strategy. But it’s good to see signs of any sort of strategic plan and execution at all.

Great picture of him, is that Bergen or Larvik?

I know one thing, it’s definitely not Kigali

No, its norway, my hometown. Had never heard of this guy just saw the pictures now and thought hey thats norway

Reminds me a little of the Cohen Bramall signing which never take made sense. Although he was much older at the time…

But who are their agents?

Definitely not kia or canales

Well, at least we’re doing something constructive here and hopefully helping and giving these youngsters an opportunity to develop. That said, the idea of then ‘selling them on for a profit’ if they fail to make the grade is good business – but just that. It’s a drop in the ocean as far as making this team more competitive – unless, of course, you unearth a real world class talent – but then I thought that was what having a worldwide scouting network was all about. It’s great helping these kids, but that ugly word ‘profit’ just stinks of Kroenkeism.… Read more »