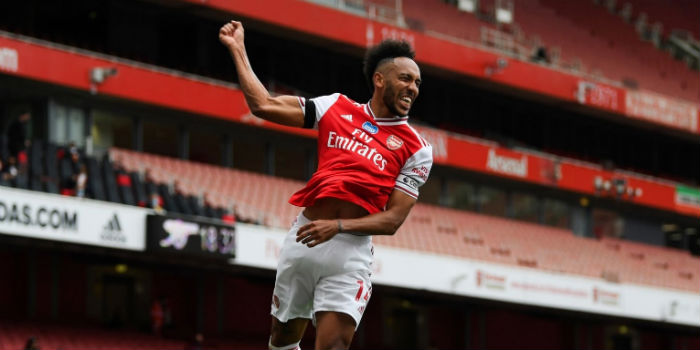 Pierre-Emerick Aubameyang has been crowned Arsenal’s player of the season for 2019/20 beating Bernd Leno and Bukayo Saka into second and third respectively.

After scoring 29 goals this season, including a FA Cup-winning brace against Chelsea last weekend, it was hardly surprising that the 31-year-old picked up a massive 74 per cent of the public vote.

The striker is expected to end speculation over his future next week by penning a new deal that will keep him at the Emirates until 2023 and increase his weekly wages to around £250,000.

A tip of the cap to Leno, who performed brilliantly before an injury forced him to sit out the run-in, and Saka, who ended the campaign with 11 assists, four goals and a new contract.

Arsenal’s first team are currently enjoying a well-earned break but will return to training soon enough. In less than three weeks, we face Liverpool in the Community Shield at Wembley.

Pity we couldn’t have voted for Francis Cagigao.

♬Aruba, Magalhaes, c’mon baby mamma,
no transfer embargo, baby don’t you know,
Raul, Kroenke, why don’t you cunts please go,
We’ll try to get there fast, but it will be slow,
way down in London Co(lney?)♬

What song (or rhythmi) is this based on?

The Human League – Don’t You Want Me ?

Looks like Kokomo by the Beach Boys to me

Deserved for his performance. The only bloat being his miss against olympiacos.

Surprised with the down votes. He said it himself how it took sometime to get over the miss. Anyway, to each their opinion.

It was a shocking miss but he more than made up for it at Wembley … twice.
And Ralph Malph from Happy Days is 67 today. Heeeeyyyy Ralphie.

I was extremely angered that we exited vs Olympiakos, but we certainly didn’t crash out due to one missed chance.
Even top strikers will miss some chances, could be at 3-0 vs Norwich and thus irrelevant or the decisive scene in a Euro knock out match, but certainly Auba is not to blame for the exit.

Those two seniors are world class players and Saka will be in the future. That’s why they are our best players. World class players make huge difference. We need more of those. If we get Partey, Willian, Coutinho (all world-class) and a young prospect from Lille. Then there will be massive improvement. Big players change games (these signings will help us qualify for champions League and win more trophies.

None of those players do any significant difference for their teams. Whether or not theyre world class.

Just for my education- why people are so opposed to signing Countinho? Transfer fee, wages or he completely regressed over the last two years or all all the above? If people think he is not world class anymore- could it be that the last team didn’t really suit him for various reasons?

Quite right too. Take his goals out of the equation and check out the mess we would have been in during the past few seasons. It doesn’t do well on the old nervous system to dwell on it too much …but it sure tells you that the centre of the defence is why we’re where we are and where, but for Auba, we might have been. He can truly push on now with this new contract and become one of the 100 goal club and, who knows, maybe join the all time Arsenal striker greats, with Henry, Wright, Bastin, Radford,… Read more »

Fully deserved although he has been subject to unfair criticism from some.
Not sure about Willian if I am honest – four years ago on a free would have been a great signing but a 32 year old on a three year contract I just wonder which of our young players development is going to suffer for it.
Is this an Arteta signing or an Edu/Sanllehi signing I wonder..

I share your concern about the probable, but not yet confirmed, transfer of Willian. Generally, we’ve got the short end of the stick regarding transfers/player exchanges with Chelsea back to Wenger’s time. If Willian is a success, then it will of course be a great transfer. If not, then we’ll be saddling ourselves with a player at several £millions a season in wages (at a time we’re laying off staff/dismantling parts of the scouting network to save money), but with an ever reducing sell-on value as his contract runs down. And there’s the point you make about potentially blocking youngsters… Read more »

Even if he ends up sat on the bench for the last 12 months there’s no transfer fee. As long as the wages aren’t stupid maybe it makes sense. If it gets us back in the champions league it probably does.

Chelsea wanted to keep him, he’s still a top player.

There will be a lot of games next season. Hopefully the young players will still get plenty of game time.

I guess time will tell whether it’s a good move or not. Looks a bit of a punt.

If his wages are “only” (ho, ho) £150,000 a week – a figure that’s been quoted – he’ll cost Arsenal over £7.5 million a year at a time we’ve sought to save less that half that through sacking over 50 staff. We’ve also dismantled large parts of the scouting network to cut costs. Of course, if he’s instrumental in getting us into the CL then it’s money well spent as you say. If not, it’s hardly a drop in the bucket, financially, particularly as there could be two or three buckets-worth depending on the length of his contract. He wouldn’t… Read more »

Why the attempt to dissociate Arteta from anything fans do not like? Doesn’t make sense to me.

No brainer really. Let’s hope that Arteta’s planned overhaul of the squad (all just plans so far of course, but there could be developments soon) means that he’ll have lots of competition for next season’s award.

He’s clearly a cyborg. That grin of his comes from the human half.

Yes, and in other news Messi is also a good player and Tottenham are sh*t.

A Different George
Reply to  chaz

Digression: did anyone see the goal Messi scored yesterday against Napoli (and David Ospina)? Knocked over in the area (I mean literally–he was on the ground) but kept going and put it into the far corner. Not human.

T.A.
Reply to  A Different George

Watched the whole match while flipping to laugh at Chelski from time to time. Messi, and his goal, did not surprise me. Nothing that guy does surprise me anymore. But I was amazed at how good Napoli were. A real team with unbelievable organization. Very strong midfield. Maybe we should check out one or two of their players and coaches?

A Voice in the Noise
Reply to  A Different George

Well, to be honest, Walcott have scored a few goals where he was knocked over, but got up and thumped it in. I think it was against Chelsea and Newcastle.
But I agree, Messi is out of this world.

All those downvotes are actually proving your point lmao

Van Persie got what he wanted. Though it pains me to admit it. Cesc won a bunch of trophies, as did Nasri etc. silly.

Wrong. The only one of our top departures that actually had cause to regret leaving was Alex Helb.

Was it ever in doubt?

Great player but mistake to extend him. We are too emotive and not calculating enough. As mentioned before we have seen many top scorers leave and others step up to fill the void. Henry left, Adebayor for one season (Before he showed his true nature and his head grew), then RVP and when RVP left first Walcott then Rambo had great seasons. We should IMO NOT extend a 31yr old with likely a much higher salary. It will again weigh into our wage structure particularly without CL and even with Ozil likely gone in a year. Adding Willian on prob… Read more »

And allthe ball licking on Auba, he may likely still not re-sign. He will say out of PR he is open to staying but if a good offer comes in from a real CL team, he is off.

At 31yrs, its his last chance to win real prizes at the highest stage.

All these people commenting here will then get salty and feel butt hurt….go figure.