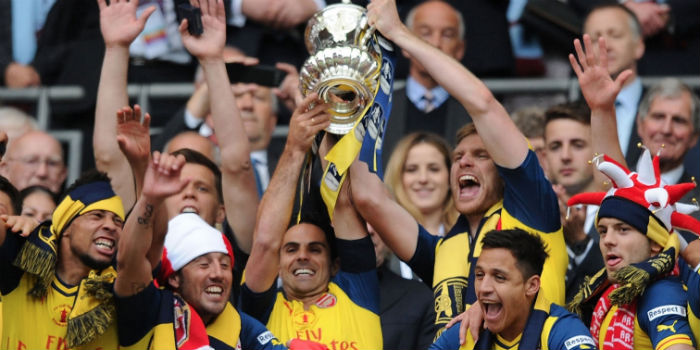 Per Mertesacker says the way Mikel Arteta has helped several Arsenal players rehabilitate their reputations this season is a testament to the Spaniard’s leadership qualities.

Defenders David Luiz and Shkodran Mustafi and midfielders Granit Xhaka and Dani Ceballos have arguably been the biggest winners since the 38-year-old took over as head coach in December, all becoming mainstays of the first team after various issues in the first half of the season.

Ahead of the FA Cup final – sponsored this year by mental health charities Mind, CALM, Sporting Chance and Heads Together – the BFG paid tribute to his friend and colleague for fostering a sense of togetherness that has allowed players to tackle problems collectively.

“I’m absolutely pleased to see a turnaround in a lot of players that have been written off,” Mertesacker told Henry Winter of The Times (£).

“Mikel came in [last December] and turned it around, and created a new energy and a new chance for players willing to contribute to the cause.

“He gives a sense of belonging to players and, with that unity, the players are stronger in tackling all the struggles that come into our world — doubts, family issues.”

Mertesacker, who won the FA Cup on three occasions in 2014, 2015 and 2017, now holds one of the most important roles at the club; heading up the club’s Academy. He knows it falls on former players like him and Arteta to pass on Arsenal’s traditions to the youngsters.

“The most important piece [element] at this club is we have seen a lot of great players wear that Arsenal shirt with a sense of belonging and togetherness, a sense of pride and respect, trying to improve and always with humility and class.

“I’m very honoured to give my all to guide the next generation of players and then guide the club in the right direction. We finished eighth in the Premier League, that’s not where we belong. With the club of this history we aim for much higher. But we need to be realistic, get better and learn from opposition who are above us.

“I was never able to win the Premier League, which is a major flaw but three FA Cup wins in four years was an incredible achievement. For us as a club, the FA Cup is our competition. We take a lot of pride in it. It is the oldest competition. The FA Cup is still important, absolutely. We shouldn’t belittle it because it could kick-start something, and it’s a route to Europe — never underestimate that.”

The full interview is well worth a read. Check it out, here.

The BFG and Arteta have really not done too badly for themselves and Arsenal.
So much for slap dash panic buys of a mad transfer window!

In terms of what they added in terms of pure footballing ability they were good, but not great players. But having a couple of actual reliable, intelligent and committed adults leading the team made such a big difference

If only they joined 2 or 3 years sooner, I’m convinced we would have won the title once or twice

Sadly I think their success encouraged Wenger to ditch the ‘youth project’ altogether, which backfired massively. Really it just needed to be supplemented with signings like these 2

? We’ve got a gigantic fornicating Teuton ?

Twatsloch
Reply to  The Unai Bomber

We do and you have one of the best names I’ve ever seen on Arseblog.

It’s weird seeing Alexis in this photo. It’s almost like I never think of him as an Arsenal player. He was just a guy we hired for a few seasons. I’m totally meh about his legacy which is strange given how great he was.

It’s pretty sad that no club will really ever remember him with any jubilation apart from perhaps Udinese. I mean, the guy was as good as anything the premier league has seen in the last decade. But he never made an attempt to build that bond with the club itself and as a result, he always seemed like a lone wolf (excuse the dog pun).

I often forget he even exists

Dunno if id go that far he was quality for us, probably our best player since henry, imagine him and auba in the same side

Don’t forget the ‘Alexis Tax’ though. The amount of possession he lost in games was absolutley criminal.

I would say that peak Van Persie was our best forward since Henry.

You think that’s weird, I’m still recovering from seeing Clive Allen photographed in our kit but when I went to our first game that season he was playing at in defence and everyone was calling him Kenny!

That picture makes me happy and sad. The fact that almost every one of those players walks straight into our 1st ww shows how much work there is to do.

Hail to the BFG!

Well it’s time to start drinking, don’t know if I can get enough down to not be absolutely terrified of this final. A free kick from Pepe, and a late Auba winner will seal our 2-1 win. COYG

Couldn’t help but read “CALM” in Unai Emery’s crazed Spanish accent. What has this club done to me?

Huh, I would have thought the final was sponsored solely by Pokemon.
Not that I’d be surprised if it turned out it is also a mental health charity…