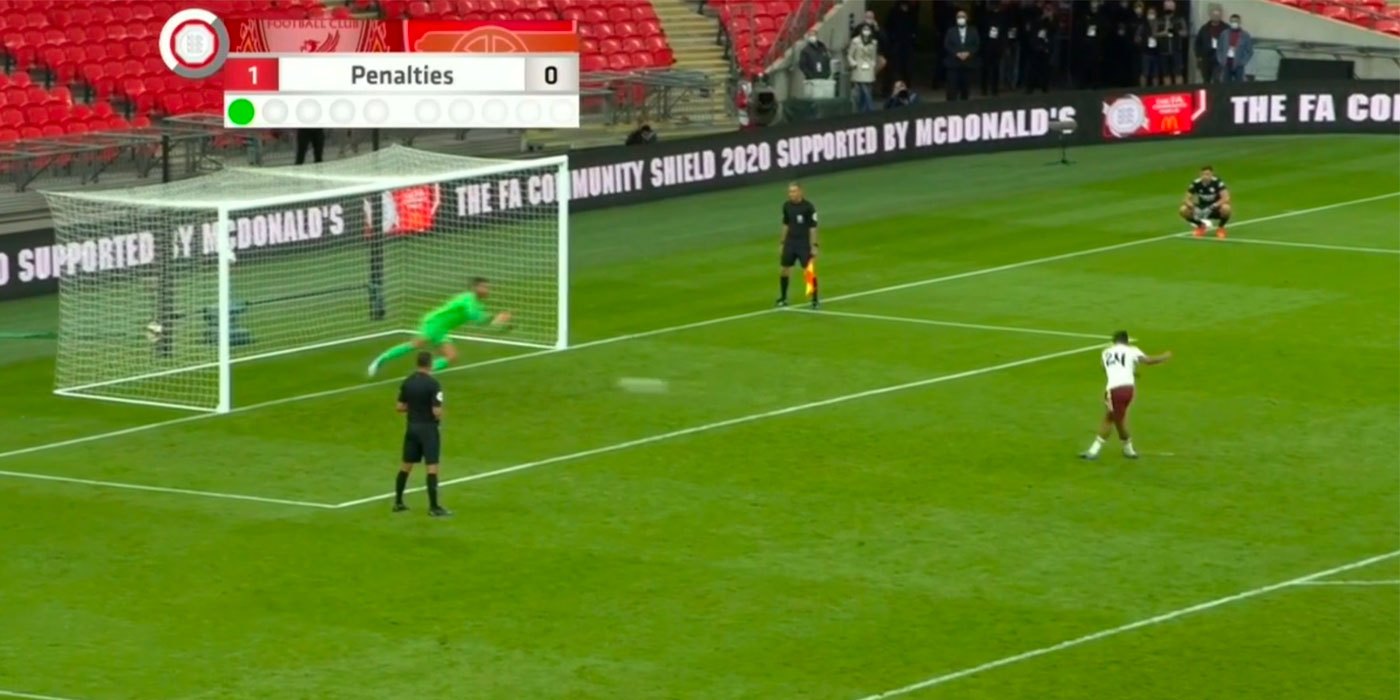 Reiss Nelson says his desire to take the first penalty for Arsenal yesterday was driven by missing out a few years ago in a previous Community Shield.

In 2017, the Gunners beat Chelsea in a penalty shoot-out, and the young winger was keen to step up, only to be denied by then boss Arsene Wenger who defaulted to more experienced takers.

Yesterday, in the 5-4 shoot-out win, the substitute was decisive, insisting to his manager he wanted to step up and go first for his team – and he set the tone with a perfect spot kick to beat Liverpool keeper Alisson.

He told Arsenal Digital, “It’s one of them things, you know. A few years ago we won it and I remember under Arsene Wenger I really wanted to take a penalty, but I think I was 17 at the time, and the boss didn’t let me take it.

“I said to myself that I ever get the opportunity again to take it again, I’m going to be the first one, be confident, just pick a spot and hit it.

“Today, I got the opportunity, I went to Mikel and said ‘I want to take it’, I was brave and he let me take it.”

A happy Arteta afterwards revealed he had no compunction about letting him do it, Nelson’s confidence a convincing factor.

“He said ‘Me first’, so when you see a player that convincing, let’s go!,” said the Arsenal boss.

“They also did really well to score five out of five against this goalkeeper, it’s not an easy thing to do.”

Superb mentality. Love it from these young players, they don’t want to hide and let the big names take them all

The Unai Bomber
Reply to  @jbrusty

Great management too, players can thrive on Mikel’s trust

Have we finally……..found our cojones?

Saka, Nelson and even Nketiah’s confidence and composure is a testament to the work being done at the Academy level, proud of our club.

Nketiah was actually pretty poor last night. However that doesn’t stop him from trying at all. He kept on coming down and trying to fight for each ball. I think this is the key different between the current squad and few years back. Now everyone is fighting for the team.

Good to see that type of confidence. Maybe it’s just me but I wouldn’t trust Nketiah from the spot in that situation. So I’m glad Nelson took one and had the confidence and took it well. Penalties in high stress high pressure situation is a mental game more than it is a skills game. Thats why I would trust Ronaldo to take a penalty in a super high pressured situation than I would trust Messi to take a penalty.

Nelson can be as good as sterling ib 1-2 years under mikel.

Better, and not such a cheaty prick.

Like you wouldn’t have Sterling in your team! Be Sterlings, young guns, only not chesty pricks too!

Sterling is perhaps the best winger in Europe. He is that good. When he was unhappy at Liverpool, there were rumours of swapping with Walcott before City came up with big money.

Wasn’t he originally at QPR, I’m pretty sure that Wenger wanted him before he went to Anfield?

All the same we have Sterling in the name of Nelson

It was a good performance for the young Gunners!!!! Arteta is building the team. Please keep AMN…. He had a good game yesterday. Up Gunners

We’re becoming the penalty shoot out specialists, aren’t we. Good “extra” to have in the locker if/when needed.

At no point did I ever think ‘Oh shit, I’ll be surprised if this is going to go in’ – even when Cedric stepped up.

Again, kudos to Arteta for getting these players in to such a mentally strong place. I love Arsene to bits, but since our move to the Emirates he often went on about the team possessing great mental strength – and they’d go out and collapse like a deck of cards.

With the right defenders, I don’t see this happening under Arteta.

I have to admit when David Luiz stepped up, I was like wtf? I just had a feeling it was going over the bar. But he scored a great penalty, and I saw a light at the end of the tunnel.

Luiz is a solid penalty taker. You’ll throw up in your mouth a little too remember he took an unstoppable penalty in the shootout when Chelsea won the CL.

It Is What It Is
Reply to  OkochaDaMan

I kept repeating “don’t do a panenka, don’t fcuking panenka it”. Not many brain farts lately.

At the beginning of his tenure, Arteta’s strength has had to carry the team. Bit by bit, you saw his composure and will transferring to the players.When these guys start believing in themselves– as with Reiss yesterday? Next step is believing in one another.

Once the team does so– they can be very good.

Our boys did it again , congrats and bravo to all the gunners , Only that Aubami should help sign the contract because Arteta is doing the right now.

That’s an awesome attitude to have. Good on the lad.

Kudos to Arteta; he is instilling a winner’s mentality into this group of youngsters that I’ve not seen at this club since George Graham made Tony Adams, David Rocastle, Michael Thomas and Paul Merson believe they could beat anyone.

We had some fine youngsters under Wenger, especially in 2006 when we started life at the Emirates, but they didn’t have the belief that this current crop of lads have – and certainly not Graham’s class of ‘86.

Long may it continue to develop.

Young players really stepping up… That was a spirited show up. Congratulations boys

I like this guy. He’s one player that need to step up this season or he will risk a chance to be with the squad next season. He might benefit from a William around him and Martineli out give him a chance to get in the team. I really think he can be a top Winger for us. It’s a big season for him.

Great team ethic this pad has. Him and Martinez have it in spades.. please keep Martinez. Love this guy. And Tierney is a rwvelation

The optimist with little hope

Nelson’s spot kick was awesome. He was calm as ice.

That was a fantastic finish and beginning of many exciting football season ahead.