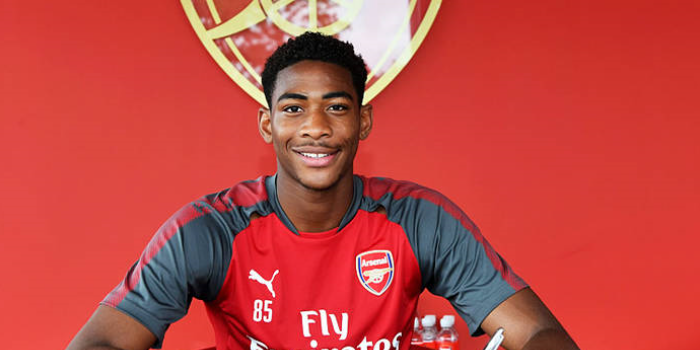 Arsenal have three talented centre-backs on the fringes of the first-team, with Daniel Ballard, Zech Medley and Harry Clarke having trained regularly with Mikel Arteta’s squad in recent weeks.

The problem that the trio face, in the short term at least, is that Arsenal have an abundance of senior centre-backs on their books, meaning that it could prove difficult for any youngsters to break through in that position.

At present, Sokratis, Rob Holding, David Luiz, Shkodran Mustafi, Pablo Mari, Calum Chambers and William Saliba are all in the first-team squad, while Kieran Tierney and Sead Kolasinac have also been used in the left sided centre-back position when Arteta has deployed a back three. Konstantinos Mavropanos, meanwhile, is on loan at Stuttgart but recently signed a new deal with Arsenal. This is all without even considering any possible new signings.

Producing centre-backs isn’t something that has come easily to Arsenal in recent years, but now there are at least some encouraging prospects in that position. As well as Ballard, Clarke and Medley, the likes of Alex Kirk and Mazeed Ogungbo have impressed for the U18s and Taylor Foran, another player with much potential, recently signed scholarship terms.

It does, though, have to be taken into consideration that Mustafi, Chambers and Mari will miss the start of the season through injury.

In a year or so the situation may look slightly better for the young centre-backs, as it isn’t guaranteed that the likes of Luiz, Mustafi and Sokratis will still be at the club then.

The youngsters may, however, have to be rather patient in the short term. Medley, for instance, would benefit from a loan spell, while Ballard could be sent out on temporary transfer again after his stay with Swindon Town was cruelly cut short by injury.

Clarke, who has yet to make a senior appearance, would perhaps benefit from remaining at Arsenal for now and he could feature in the Europa League depending on the situation with other players.

It will certainly be interesting to see how Arsenal manage the development of Ballard, Medley and Clarke given the competition that they face.

Arteta appears to be looking to offload several of our “established” centre- backs so there could be room made for at least some of the promising youngsters. The problem we have generally is that many of the players we want to sell other clubs don’t want to buy – or at least not on the terms we’re looking for. Still, we may get lucky.

Who do you mean by several? Sokratis, ok. Although hes made clear already that he has no intention to leave. But apart from that?

Rumours say Arteta wants to let Sokratis, Holding and Mustafi go if we get offers. Personally I would let Chambers go too and give youth a chance!! Our youth set up has shown amazing signs with the like of Saka, Balogun (if we can keep him), Nkethia and Willock (who I think has more to prove but Arteta sees a lot in him).

Arteta avoided using Holding in quite a few games. I like Rob and hope we keep him, but he’ll have a relatively high valuation as a young but experienced English CB and I fear we’ll sell.

well i guess we’ll have to resign ourselves to losing holding for 30 mil to everton. sigh. i like him.

I like holding but there are two major flaws in his game. 1. Conceding possession (especially corners) too easily and 2. his pace. Because of his speed, I think he can really only play the center of a back 3 — on the outside, he has too much space to cover against wingers. So its either play him or luiz and not both (i’d pick holding over luiz). I think chambers, mari, saliba, and holding should be kept. But for anyone other than saliba among our centrebacks, anyone that gets a fair offer should be sold.

He avoided playing him because he just came back from an ACL injury and was out of form, which is quite normal after such an injury. Wouldn’t read too much into this. He trusted him in the final when there was an experienced alternative in Papa. Don’t say there’s no way we end up selling him, but I haven’t seen evidence that we’re about to offload several central defenders this summer.

Not necessarily because of injury though, it’s his playing style. Arteta seems to prefer ball playing centrebacks which is why he seems to trust Luiz more than any of his current centreback crop, Holding is more of defensive centreback as he excels in purely defensive situations but struggles when asked to do more just defend. In an Arteta system where the defense is required to play a high line and pass confidently from the back to build up play, Holding would struggle because of his lack of pace and how limited in possession he is. And please don’t compare Holding… Read more »

Mustafi can(will) still be sold when he’s recovered as the transfer window is open until October.We Need two top quality CB, and we can’t waste KT in a back-three, there’s literally no point when we can buy two CB better than the ones we have for relatively little money. A back-three of Saliba and two upgrades, with Luiz and Mari fighting for 4th/5th. This is the way forward. Chambers comes back and supplants Luiz..

that kid Zach Medley is not gonna make it.. at 20 and he’s no where near the first team is worrying. its also worrying that Arsenal are in the market for CB’s while we have a player like Zach Medley 6’5 left foot and he not ready for first team football.if he was we won’t need to buy a CB. its a shame all that height for nothing. I’ve seen him play and his biggest problem is he lacks urgency and aggression as well as his positioning is poor. I feel bad for him as this would’ve been his big… Read more »

I think the problem is actually offloading the senior defenders. They are on pretty steep wages and it’s unlikely that they will command the same at another club. If we can offload three of the defenders, maybe that opens up a space for one of these young players coming through the academy. If not, I think loaning them to a Championship club is not unreasonable.

What conundrum would that be? None are ready to step up. Just prob League cup games early stages (if that even)

We have to remember with Holding (just like with Bellerin) that it is tough to judge him on the season coming off of the ACL tear. Although one is cleared to play after an injury like that it can take up to another year for them to be close to 100% physically and just as important mentally. Still think he has a bright future.

One of the few sensible comments regarding Holding here.. way too many seems to forget he had an A-C-L injury………

Totally, ACL tear is why I’m not playing for Arsenal, well basically………

I keep on reading that Arsenal/Arteta want to sell Mustafi this summer but he’s injured so how on Earth does the media think we’ll pull that one off?

wait, you saying we’re the only ones who get injured players?

There is after all only one club daft enough to buy injured players!

Yes, we were daft enough to buy an injured Tierney

I mean it’s not like the guy is dead and his value is in the toilet. His value has probably never been higher at arsenal and He’s available again in October.

This is probably the best time to be a promising young CB at Arsenal. CB is one position in the team which looks completely up for grabs, even amongst established first team squad players. If they keep training hard and progressing the opportunities will open up soon enough. If they go out on loan for a year and do well, there’s a good chance when they return spaces will have opened up in the squad. The ball is in their court to put in the hard work required to get into the first team squad but it’s a good chance… Read more »

We need quality over quantity. You’re right in saying that the defence generally has been our weakest point (for many years now). But you tackle that by getting quality defenders in. That means offloading, if we can – and that’s a big “if”, the sub-standard defenders that we’ve accumulated in recent seasons. That will give an opportunity for some of these youngsters to come through. However, quality isn’t cheap and as we know Arsenal are in a very tight financial position so we’ll have to be careful and canny in the transfer window.

Ok, I know this should be in the arses, but I’m not a member of that. However, I want to reply to blogs latest post about the redundancies. Whilst I fully agree that Stan could, and possibly, possibly, should retain all our staff on full wages, that is a very idealistic view. The fact is the club is operating on a substantially reduced income and superfluous jobs are an inevitable casualty. AFC is a football club about competing and winning. If cuts need to be made elsewhere to facilitate this then so be it. I have great sympathy for those… Read more »

Just seen your post – very interesting and sums it up really. It’s a business to the owner. It’s something quite different to fans of course – but the clue is in the word “owner”. Some Gooners have come out with statements like “The owner is a billionaire, so money should be no problem” as though part of the owner’s money is Arsenal’s money almost by right. Very wealthy businessmen/women didn’t get to be very wealthy by giving their dosh away. They may give some/all of it away at some later stage of course, possibly to meet their Maker with… Read more »

The problem with Arsenal’s defence is a basic issue. Most of the defenders are attracted to the ball and unaware of the obvious movement taking place within 5 yards of them. Pick the runners and cleans heats will increase

I think the easiest way to improve our defense is to improve our midfield. Holding may still come good, or feature regularly in aback 3. Mustafi, despite the residues of hate (and the memories of brain farts), has shown he is a very decent defender — when part of a functional team.

We would not have made it to the Cup finals without Mustafi and we would not have won without Holding. Maybe we should sell either for the right price, but neither should be thrown under the bus.

We cannot afford to sell any of our homegrown quota

I think we will try to move on sokratis and maybe mustafi, which will be difficult seeing as he injured.

Also with 11 goalkeepers now on the books, surely some have to go.