Last week’s win against Fulham was fun, but we didn’t really learn too much about the 2020-2021 version of Arsenal from that match. It was important that they took care of business and left the match without adding to the list of question marks that they would need to be answered.

This match against West Ham was always going to be a bigger test and while Arsenal did come away with all three points, they also came away with a number of new questions that will need to be answered.

Arsenal 2-1 West Ham: By the graphs 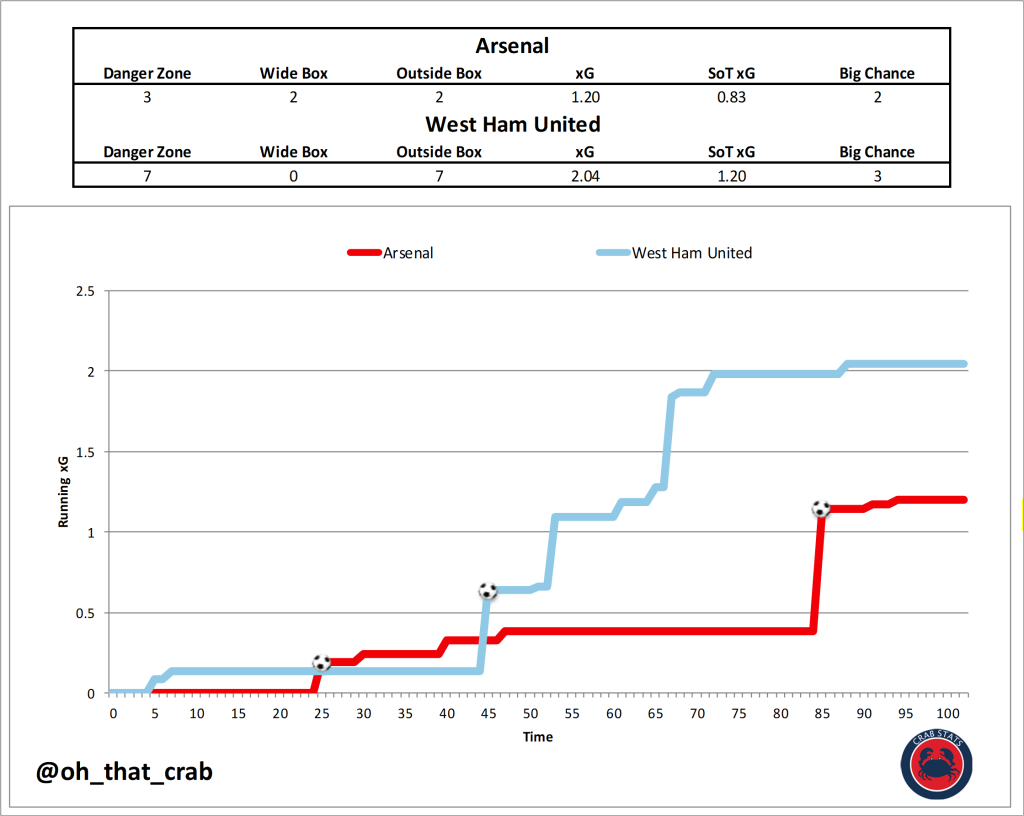 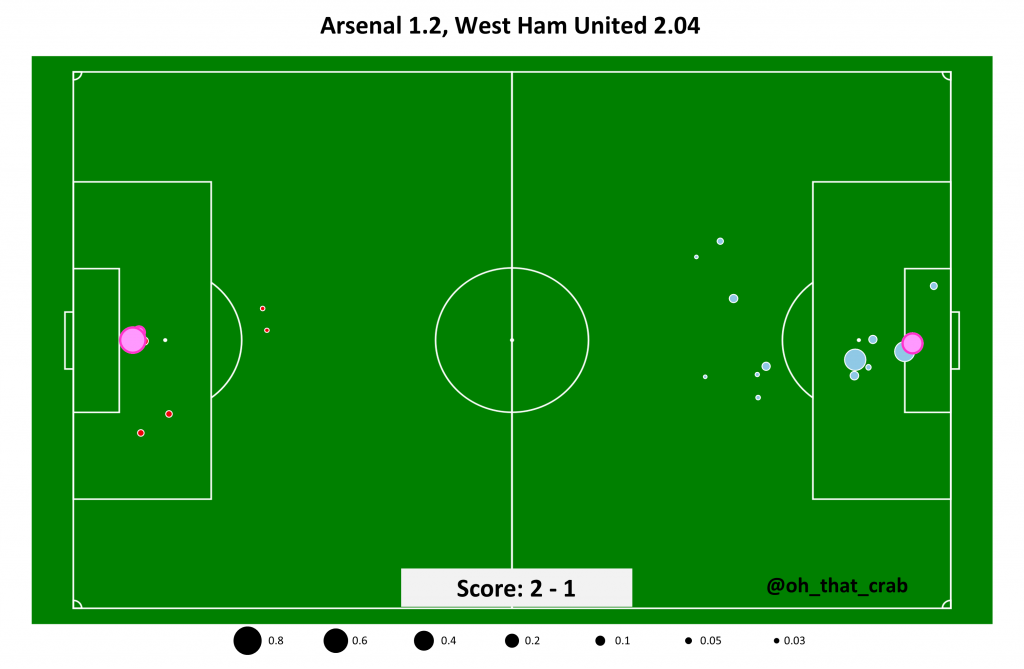 One of the concerns going into this match was how would Arsenal do when they faced a well-organized defense. West Ham are a relatively passive defense and look to sit back in their low to mid-block. This is the type of team that Arsenal had struggled to break down over the last couple of seasons and in this match.

In this match, Arsenal was able to actually get the ball into dangerous areas and were the better team when you look at this match from a non-shot xG perspective.

63 – Touches within 25 yards of goal for Arsenal, compared to 34 for West Ham 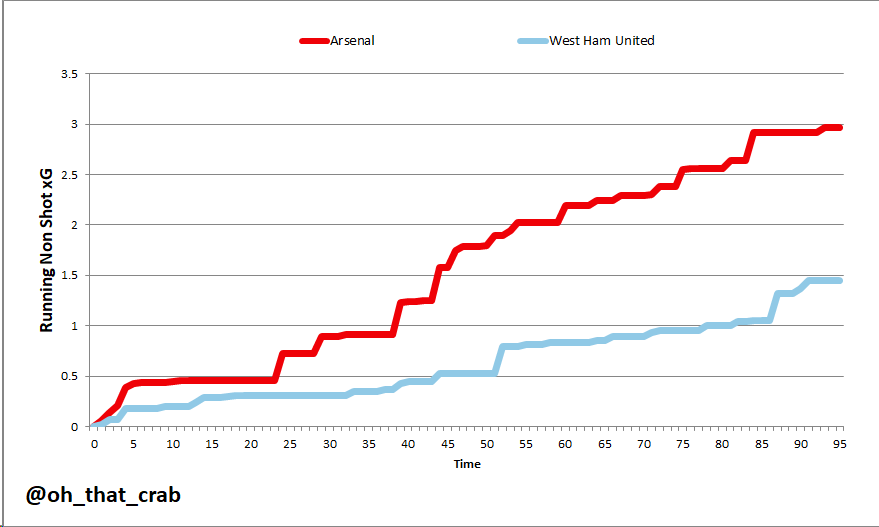 The question that this match raises for me is, do Arsenal have the players that can turn this possession into killer passes and shots.

13 – Touches within 25 yards of goal by Bukayo Saka, led all players.

4 – Shots and shot-creating actions from this possession

11 – Touches within 25 yards of goal by Alexandre Lacazette

1 – Shot and shot-creating action from this possession

9 – Touches within 25 yards of goal by Pierre Emerick Aubameyang

5 – Shots and shot-creating actions from this possession

7 – Touches within 25 yards of goal by Willian

1 –  Shot and shot-creating action from this possession

6 – Touches within 25 yards of goal by Dani Ceballos

4 –  Shots and shot-creating actions from this possession

5 – Touches within 25 yards of goal by Eddie Nketiah

1 –  Shot and shot-creating action from this possession

4 – Touches within 25 yards of goal by Sead Kolasinac

0 –  Shot and shot-creating action from this possession

4 – Touches within 25 yards of goal by Héctor Bellerín

0 –  Shot and shot-creating action from this possession

Looking at the above the big concerns for me would be Alexandre Lacazette. He led Arsenal in touches in the box and was second in deep touches but he only came away with the one shot and didn’t create anything for his teammates. There were a number of times that he was in a decent area but chose not to attempt a shot, this is something that Tim Stillman also noted, calling him a “Goldilocks” player where the ball and his touch have to be just right for him to want to attempt a shot or set up a teammate. That can work in some teams but with this Arsenal team where Lacazette is playing as not just the striker but also the player that often drops into the space where a number 10 would operate, I think he needs to be more aggressive in hunting for shots and creative opportunities.

The above also makes it very obvious why Arsenal are linked with a player like Houssem Aouar who should be able to shoulder more of this attacking and creative burden. Ceballos was the most creative of Arsenal’s midfielders but I think that last season showed us that he is better when he is more of a connective player who occasionally makes runs forward, than one who plays primarily in an advanced role.

2 – Shot conceded from a set plays, one from a corner, and one from a direct free kick

0.14 – Expected goals value of those shots

Overall this was a positive sign for the Arsenal defense, I still feel worried when opposing teams get these opportunities but so far Arsenal have dealt with these situations without too much trouble.

Sources: Opta via Whoscored, StatsZone and my own database. StatsBomb via FBref

great analysis as ever, scott

May be Auoar in the 10 position and Auba up front will make it better?

I also noticed that Laca works his socks off, but at times, he is not actually getting anywhere. All over the place and running around.

I really hope Arteta has planned some actions for the above analysis of deep touches vs actual shots ratio.

I would love to see for one game Saks on the left, Auba as the central striker, with William on the right. I think Auba can make more damage having the freedom in the middle, but right now the defenders know he has to cut to right most of the time to shoot.

Auoar isn’t so much a number 10 in my opinion. Last year he was pushed higher up the pitch by Lyon and didn’t really have that much different attacking numbers. He is a lot more a player who starts deeper and gives creativity while doing enough midfield things that he can be played there.

Good analysis. Arsenal have had the same issues with these players and no manager will be able to turn them into top 4 challengers without improvement in central midfield. The problem is that there is next to no feasible interest in any of players, in the sense that they will improve potential buyers. Nothing for any of our defenders. No interest in any of our midfielders other than maybe Torreira, but we’ll lose money on him for sure. Lacazette is not elite level in the premier league, maybe a mid table team, but not one for the top 4. We… Read more »

We know where we are: we need a more secure and creative midfield – we need Aouar in the front of midfield. I’d love Partey at its base but we’d have to sell a bunch of players for good money and it seems too much for one window.

A telling statistic I saw was that from the 47th minute to the winning goal being scored in the 85th minute, we didn’t have a shot on West Ham’s goal. Makes you think!

Arteta said that he is not too concerned with formations. Indeed, if he persists with the 3-4-3, then in Saka, Ceballos(nominally; very, very nominally), Willian, he has three players who can keep the formation fluid and flit between attack and midfield. Talking of players used in the matches till now, that’s not an Elneny job, not one for Xhaka (at all), not AMN. Not even Pepe. As someone who hasn’t watched Ligue 1, is Aouar the kind of player who can do that? One of the prime reasons that Ozil can’t make it in this team, at first glance, is… Read more »

I’d argue that we need a Firmino type false 9 more than a number 10.