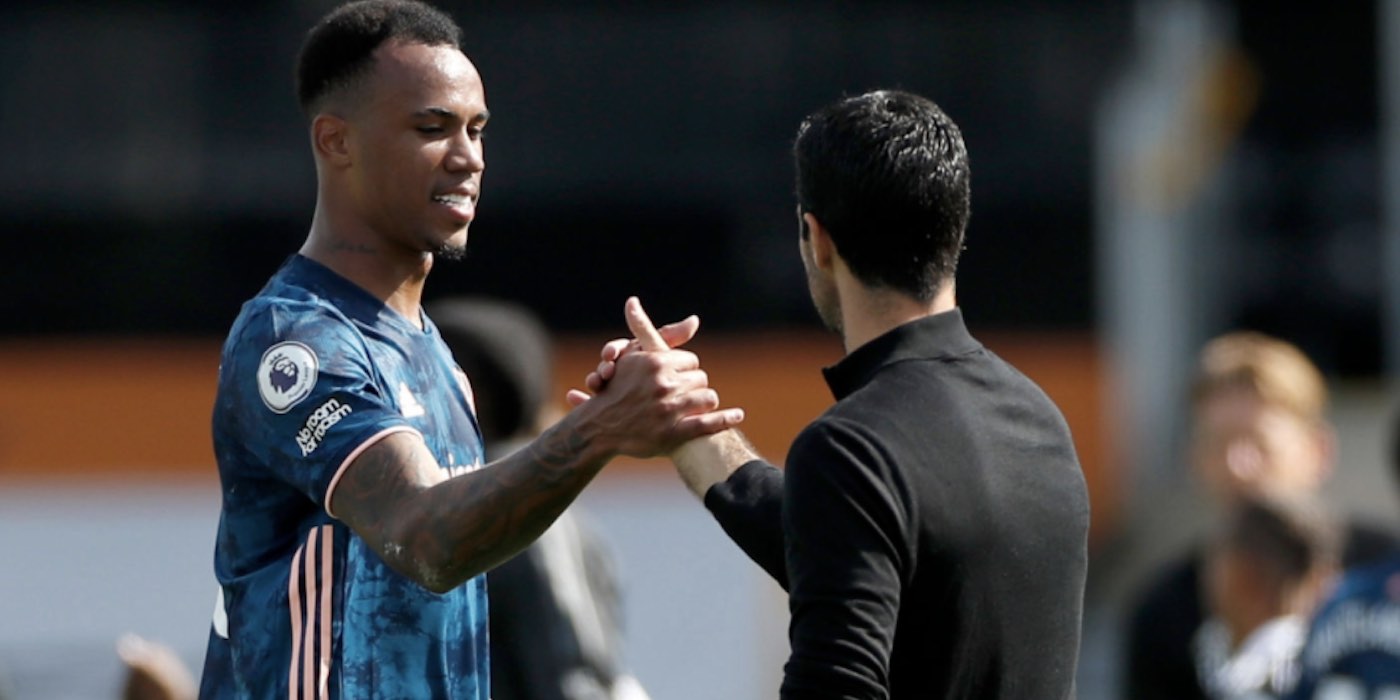 Gabriel Magalhaes last played a competitive game of football on March 8th, when he featured in Lille’s 1-0 over Lyon.

Today he scored a goal, was the team’s leading passer, and helped the Gunners keep a clean sheet in the 3-0 win over Fulham in what was officially a man of the match performance.

Arsenal boss Mikel Arteta admitted he’d have liked to have given him more time to settle in, but with David Luiz, Sokratis, Pablo Mari, Calum Chambers and Shkodran Mustafi all unavailable, he was asked be the anchor in a three man central defence on his debut.

He acquitted himself very well, impressing his manager and fans in the process. Speaking afterwards, Arteta said, “Ideally I wanted to give him some time because he’s only trained a few days with the team and physically he hasn’t played a competitive match in six months.

“So obviously there was a risk of injury as well, but credit to him because he performed really well physically, he felt good and he was a handful today.

“With Gabriel it was a big challenge for him to come in today having not played any football for the last six months and he had a terrific performance.”

The Spaniard was also very happy to get the season off to such a positive start.

“I don’t think it gets much better than that,” he said.

“I think it’s really good for the players, for their confidence, for their belief, and to settle in the group quickly.

“It’s always a challenge when you bring in new players but the way they played today and the commitment they showed with the boys, it was terrific.”

We are all levelheaded here
and clearly thats an understatement.

We will be closer to the top than many people want us to believe.
We will make up for whatever we lack in quality with abundance in unity.

Come May, I would be surprised if we don’t finish Top-4, with Arteta humming for the Manager of the year.

No pressure, lads. There you go.

Well, I don’t want to get my hopes too high but I wouldn’t be too surprised if we do a Leicester and go on and win the league.. #COYG

In Arteta we trust.

I am that positive too.

Well, let’s see. Liverpool were pushed all the way today by Leeds Utd but still managed to pull out an 88th minute winner in a seven goal match. We’ll face that kind of game this season at some time and whether we can get a similar last minute winning goal will tell us a lot about where we’re likely to finish.

I do agree that Liverpool managed to get a victory in the last few minutes but I do think they were shite and could have been defeated if they were up against a better opponent. Tbh they have been shite ever since they won the league. Their midfield had no clues sometimes during the match with the Leeds players up against their ass man marking them.

Leeds are definitely the mid table team that I am going to watching this season. They had no fear whatsoever.

Liverpool were lucky as Rodrigo was stupid. They really didn’t look like champions. May be rusty or overconfident but some issue. Same against us. I won’t be surprised if they don’t finish in top 2

Cutting down points from Leeds is a good thing, me thinks

Great start to the season. Top of the league! Good debut by Mangalahes. Started a bit shaky which I suppose is predictable but good height and strength and I though decent pace too to track. And (a combination of poor defending and good delivery) led to an opening goal nutmegging the keeper with a free header 2 yards out. I thought arteta opted for safety at the back given enw faces which is sensible. Holding and Tierney in the back 3 added some reference and continuity.Hopefully we find partnerships at the back with better pace and positioning which can lead… Read more »

I think you need to start your own blog.

No kidding. His comments are usually way longer than the article itself.

Maybe he could call it Santoriblog

Think I agree with most of what you’re saying. Anyway, gave you a thumbs up for effort

Agree with a lot, but think retaining Bellerin is imperative and Laca should not be for sale when we have no other experience at centre forward

He had a good debut – one or two shaky moments certainly but, overall, a very encouraging start. His goal was really a “freebie” by the home side (the sort of goal we used to gift to other teams on occasion). I doubt he’ll get an easier one this season, but you still have to score them when the opportunity arises and it will have done his confidence a deal of good. It will take time for him to settle in fully – the PL is very different from most other leagues – but it’s looking (at this extremely early… Read more »

Was Saliba injured? Would have expected him to be on the bench at least?

Only at arsenal, we could have 8 center backs And have 5 injured at the same time, I can only imagine what our situation would be if we had only 4 CB’s

Mari looked slow to me from what little we’ve seen of him. I think he will be the odd man out.

What is the best back 3? Saliba, Gabriel, and Luiz? Holding as the backup. We must be thinking of selling Chambers in January if he’s healthy or loan him out and let him regain form at another club?

Only at arsenal, if we had 4 cb we’d still somehow manage to have 5 out!

Gabriel was authoritative, something not seen in a while. Great presence. Also really liked the positions Maitland niles was taking up when we had possession.