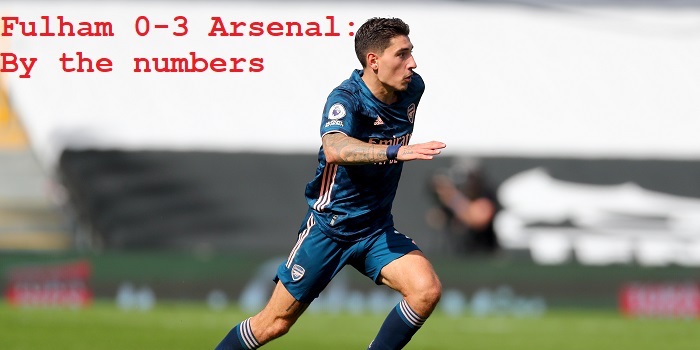 Top of the League!

Arsenal are top of the League! My team didn’t concede a single goal to a newly promoted team(Judging by other teams this is quite the accomplishment)! It will be a great feeling to go to bed tonight knowing that Arsenal are in first place.

I am not so naïve as to believe that Arsenal are going to go on a legit title run (let’s check back in a couple months on that) but it sure is fun to see them actually beat a team that they should by a convincing margin. This was not a regular occurrence last season and I think that it will be the first step towards Arsenal fighting back to regular top-four contention and then hopefully for bigger honors.

Fulham 0-3 Arsenal: By the graphs 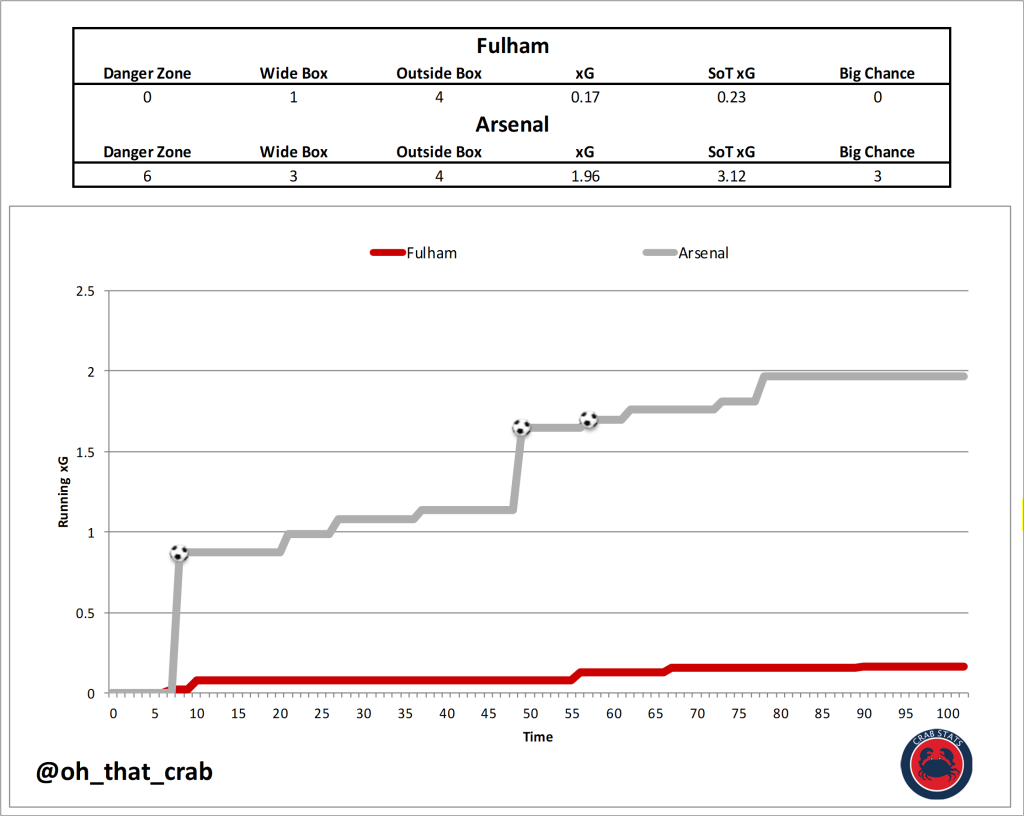 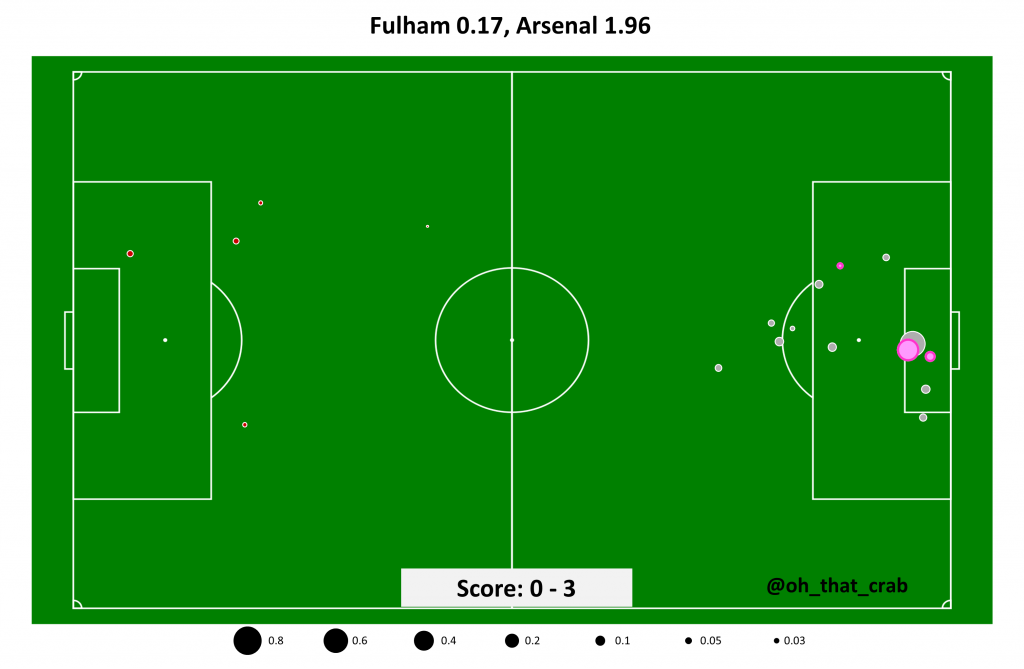 54.4 – Arsenal’s total possession in this match

89.7 – Arsenal’s percentage of the possession in the penalty area

72.2 – Arsenal’s percentage of the total shots in this match

The first two stats suggest that this match might have been close, the next two show that Arsenal was by far the dominant team. One of the things that really stood out for me in this match was that Arsenal’s defensive structure looked really good, and made it really hard for Fulham to advance the ball deep, and when Arsenal got the ball back, for the most part, they were in a good structure to hold on to it.

0 – Shots in prime locations for Fulham

It is really easy to say this is just Fulham and that Arsenal should be dominating this match but last season Arsenal didn’t have a single “easy” match where their defense looked as good as this. The closest last season was home against Norwich but that was still at home.

One of the things that I pointed out last season is that Mikel Arteta seems to have focused on fixing the defensive structure first and that I was hopeful that he would use that as a platform to fix the attack after. The early returns are positive that Arsenal are looking to continue to maintain solidity at the back while making incremental improvement in attack.

1 – Goal from a corner kick by Arsenal

One of Arsenal’s biggest weaknesses last season was corner kicks, they weren’t especially dangerous when they earned one, and they always seemed on the verge of giving up a goal when the opponents won a corner kick. It is an incredibly small sample but it is so encouraging to see Arsenal generate 2 shots while nullifying their opponents from creating anything. Overall, Arsenal created 5 shots from set plays and 0.8 expected goals, if Arsenal are looking for marginal gains to help put them into the top four race, set plays are probably the lowest hanging fruit to make improvements.

86.7 – Pass completion percentage, on an expected passing completion of 68.4%

6 – Progressive Passes, 2nd most on Arsenal

6 – Progressive Carries, 3rd most on Arsenal

3 – Completed passes in the box, 2nd most on Arsenal

Arsenal signed Willian to add a creative spark to a team that was badly missing it, he delivered in his first official appearance with the team. Putting your feelings on his contract to the side, this was a very good performance from Willian. He provided much needed technical ability to the team and looked like he was already well integrated into how Arteta wants this side to play.

Getting thrown into the starting lineup as a center back is never easy. Having not played a competitive match in six months makes that even harder. You could see some nerves and some rust on Gabriel but this was as good of a debut as you could hope for from a new signing. He has an early communication error that almost led to Fulham getting a gift one on one situation that Leno was able to manage but after that, he played essentially error-free.

If we want to pick nits or look for areas for improvement, his passing could certainly be less sideways and more progressive but I will gladly give a pass to a 22-year-old center back with little time training time.

4 – Passes completed into the box, led all players

If this is one of the last matches that Hector Bellerin plays with Arsenal I really want to appreciate it. He made some great contributions to Arsenal’s attack with his passing and ability on the ball. Replacing that skill is not going to be easy, and it is pretty clear what other top teams want when they are making bids to try to bring Bellerin into their teams. I think that he has absolutely represented the club the right way and I don’t want to see him leave, especially right as he is seeming to come back into form after his knee injury.

I’d love to know how we looked in zone 14; I was encouraged by how central a lot of our shots/attacks were. Excellent piece as always, Scott!

We do seem structurally more sound defensively, which seems to be a whole team shape and press approach under Arteta.

Overtime, I hope to see some really positive trends emerge in the midfield, which feels the stress and can’t protect the defenders when team shape and pressing goes out the window.

Not sure whether that will lend itself to numerical analysis, but hoping to see it in the pitch!

What’s the difference between xG and SoT xG again?

SoT takes into account where the shot ends up on the frame of goal regular xG does not.

And I REALLY hope Bellerin isn’t going anywhere. Have you heard something I haven’t?

25m is a ridiculous bid; we can’t possibly be considering that. He’s a 45m-50m player, even in this market.

This makes me very sad, but as Blogs has been saying; this window there will be good news that has been created by some bad news, and it does look like Bellerin is the one to be sacrificed to achieve our transfer goal. Has Arteta said anything about Bellerin? He spoke about other transfer rumours, ie Lacazette, Holding & Martinez. I join Scout and am determined to enjoy Bellerin last matches if it is to be. Just a shame if it is to be, Bellerin has been through some really bad times with Arsenal, injuries, a bad manager. Would love… Read more »

Why are we even considering letting Hector go? It looks like he’s coming back to his best!

It is a interesting debate regarding the modern day full back.Most of them are great going forward I.e Hector, AlexanderArnold,Karl walker but most of them pretty weak defensively.Wan basaka good defensively shit going forward.Not many names out there who you could say would be a upgrade.

My apologies that should be Kyle walker.My brain turns to mush when I have to.mention anything to do with them down the road.

Lets make one thing very clear to the market, we are not a selling club!!

Where did you see that he is coming back to his best? He was shit today, he had a yellow card and he could had a red card as well. He is crossing is zero, He is not reliable in defending as well. We would be very lucky if we sell him for 25m

VAR will solve the problem
Reply to  Arsenal 12

I guess you did not see the own goal scored at Anfield by supposedly the best right back in the country? That was shit!

Granted it didnt count for earlier offside but he didn’t know that at that time. He was also responsible for the first Leeds goal too. So yeah even the top players have a shit day. Doesn’t mean Liverpool will sell him to PSG for 50 mil or loan him out to Barcelona

A Different George
Reply to  VAR will solve the problem

Alexander-Arnold was pretty bad, not just on the chalked-off own goal. I think that if I can see his weaknesses despite the hype (brilliant passer when he has open space, or a set piece, very good recovery pace, but quite poor on one v one defending and often easy to bypass in midfield)–well, Bielsa can see it too. Leeds’ attack was based on isolating Alexander-Arnold and, with a bit more defensive coolness of their own, they would have beaten Liverpool because of it.

Thank you for the analysis. I wonder if you could provide some insight into Elneny. He was good against Fulham, especially after a year out in another league, and it reflected in Arteta’s effusive praise. Are there any metrics to measure his performance?

Also, for Bellerin, I really hope we don’t sell. It seems he has been tarred with the Emery’s Arsenal brush, and there seems to be less leeway for a player returning in extraordinary circumstances from a truly debilitating injury. Of course, Arteta surely must rate him highly,having played with the man.

Bellerin needs to stay. He gives us another dimension going forward and good width. He is also one of the long staying gunner we have with arsenal values.

I am loving Tierney, what a player we have and the level of his consistency is on a different class. I want him to move forward in LWB role rather than a LCB.

Not a single post on Women winning 9-1 abs Roord getting another hattrick!

There are dedicated articles for each of the women’s games. I highly recommend that you check them out!

Hi Scott, how is expected pass completion computed?
Good work by the way.

We are winning the Europa League this season…Yes! You heard it first on here