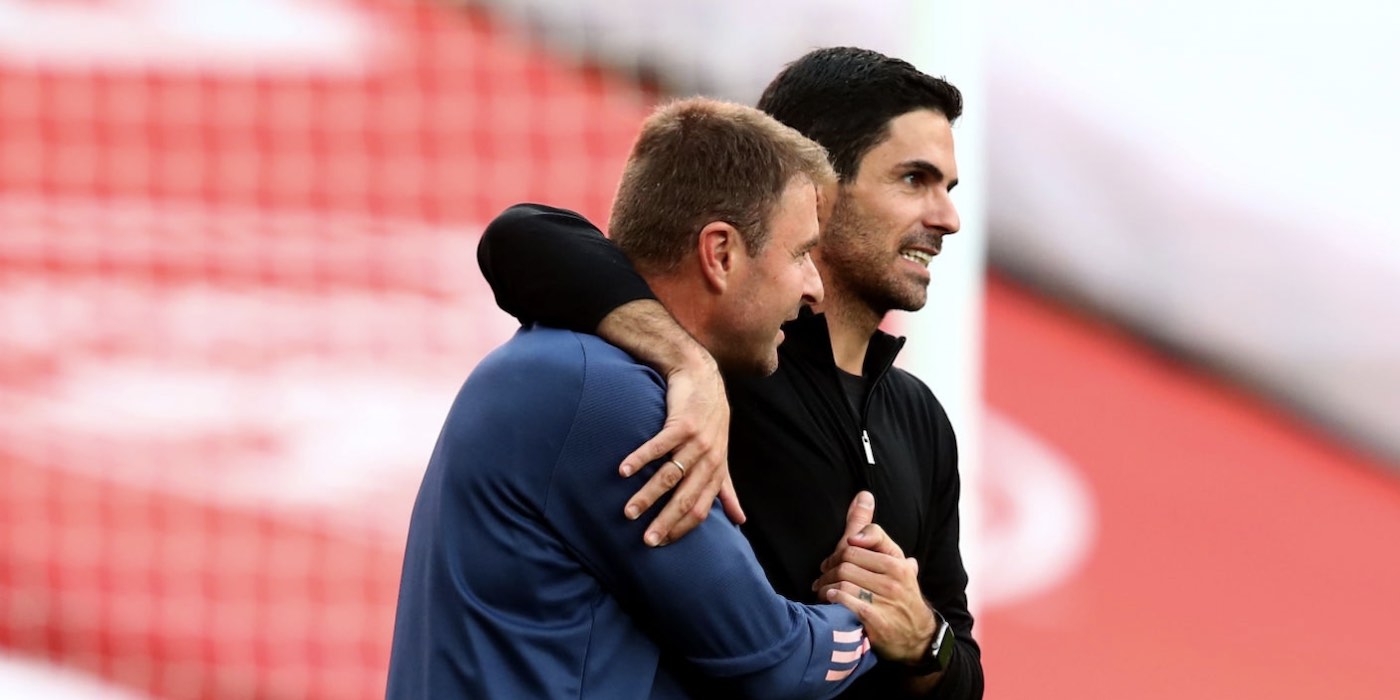 Arsenal are expected to complete the signing of Icelandic goalkeeper Runar Alex Runarsson over the weekend, paying Dijon around £1.5m for the 25 year old.

He worked with Raya at Brentford before he joined Arsenal as part of Mikel Arteta’s staff in December, and his connection with Runarsson goes back to his days at Danish side FC Nordsjaelland.

His input into our transfer targets is something Arteta spoke about yesterday, and although he made it clear he has the final decision as to who comes in, he is open to listening to his coaches and leaning on their expertise.

“At the end of the day I bring in staff with very special qualities to add to what we are trying to do,” said the Arsenal boss.

“And then I have to give them responsibility because I want them to be accountable for the tasks that I give to them and the clear roles that I have give to them.

“Obviously at the end it will be me who makes the decision. But is very important that the people around me, who have on many occasions a much clearer criteria and specificity than me, that I really listen to them and try to follow what their feelings are.

“I have big faith in Inaki as I do with the rest of the staff that are here. I will take that into the medical department, with the physios, the kit man, every department that is here.

“They have much more expertise than me. I want to control them, I want to make sure that they share their values and direction we want to take.”

There’s certainly nothing wrong in listening to people who have knowledge and experience, and it will be interesting to see how it works out with Runarsson who will arrive in England on the back of a disappointing time in France. It might simply be that he was at the wrong club, in the wrong environment, but his move to Arsenal will be primarily down to his relationship with our goalkeeping coach and his advocacy of him, rather than his outstanding performances when he played.

That places a question mark over him from the start, but let’s hope it’s one he can answer.

Runarsson promising to work his Runarss off

If we really do get both goalkeepers, then I guess Inaki has great faith in Runnar, and the club believes we can buy him on the cheap and increase his stock, whereas Raya could be a genuine long-term challenger for the #1 spot.

The question is do we want to spend scare financial resources on Raya rather than on, say, a quality midfielder? If they decide to sell at all, Brentford will hold out for around £15million I think, knowing that time is running out in the window. We could put that money to good/better use elsewhere, couldn’t we?

I doubt very much both will come… at least that’s not my understanding of the situation. Sounds like Reya was first choice, but we couldnt do the deal so went down the list.

I wonder if he fancies being prime minister …

Makes sense to listen to people who have expertise. Thats why they are hired.

True, but following that logic I still don’t understand why we let go some very experienced scouting staff a while ago?

Runarsson does start with a question mark due to his comments in the past as well. I don’t know the context in which he made them.

Simp for Arteta
Reply to  OlegLuzhny

Could you please fill me in? What comments?

Sachin
Reply to  Simp for Arteta

He abused Wenger. Something countless Arsenal fans (never me) have done out of frustration.

I mean the ‘abuse’ was hardly extreme also, he just called him stupid

It was also around the time of the 8-2 and losing Fabregas and Nasri, tbf

TJOY
Reply to  Simp for Arteta

The offense archaeologists have dug up some old tweets of him criticising Saint Arsene when he was 16 years old. Context-the tweets were after we surrendered a 3-1 lead to Tottenham, lost 2-0 to liverpool, and were in the process of selling Fabregas and Nasri-the week of the 8-2 humiliation at OT

Simp for Arteta
Reply to  TJOY

Plenty of people on here slagging Arsene off at the time I expect, though probably with less expletives …

If we’re hauling people over the coal for having been teenagers then the entire world would end up unemployed.

Didn’t think of that.

A more important question mark is surely about his performance. There aren’t too many reports but the few there are indicate that he’s very “average”. That doesn’t mean he can’t/won’t improve of course, but it’s worth noting. The bottom line is what he does on the pitch (which could be the difference between winning/drawing/losing a game) rather than what he said several years ago.

Emi Martinez was considered, if I’m not mistaken as quite average by most fans before lockdown and before Inaki got into him so let’s see how this fella shapes up after some proper coaching?

This is devolved leadership. This is a refreshing and excellent approach to team management.

I might be overstating but our goalkeeping coaches are so strong that they turned Martinez into a world beater so why not others? Could be a great area to generate profit long term.

I liked Martinez a lot and he’s a good keeper but to describe him as a “world beater” is really going too far. For once, timing was in our favour with a transfer because he turned on an excellent run of form when standing in for Leno which was fresh in potential buyer’s minds when he was put up for sale. Without that, we certainly wouldn’t have got £20million. The real test of his abilities will be, week in and out over a whole season, helping to keep Villa in the PL. If he does so, it will be money… Read more »

He looks more like a third choice to replace Macey, and Raya will come in as second choice. I doubt Arsenal will risk putting a £1.5 million player with a poor recent record straight into the match day squad.

Even £1.5m is a lot on a 3rd choice. Will Runnar willingly come under those circumstances? Inaki has been very specific about his targets and i think there’s a reason for that – he either thinks Runnar is a decent enough back up or that he will be after some work.

If Leno gets injured then he could be playing a lot of games. I just don’t see the club taking that kind of risk with a Dijon reserve.

Be that as it may, the buck stops at Arteta’s desk.

Runarrson has got very average reviews as far as I can see (albeit he’s cheap at the reported fee) so Pavon must see something in him that isn’t apparent. Raya still appears to be on the radar though. He is much the more finished article but, of course, far more expensive. I doubt Brentford will let him go – if they let him go at all – for less than £15million or so. At the end of the day, I doubt that we’ll spend that kind of money as financially it’s very tight and we can more usefully invest it… Read more »

Perhaps Leno for Fifty-Seventy million is on next summer …

As a goalkeeper myself I have SOME OPINIONS about goalkeeping, and it does sometimes frustrate me the lack of thought and understanding many managers, pundits, fans, scouts etc show about the position. So in theory allowing someone who absolutely does know what they’re talking about to select targets makes a lot of sense But it’s worrying that he only seems to be selecting from his former students. Raya, from the handful of games I’ve seen doesn’t look very good at all, and Runarsson (though I’ve only seen a highlights comp) has a very low key cv for a 25 yo… Read more »

In a well-run organization, Mikel and the other technical team will put Mr Pavon on a panel and shoot him up with practical queries before they sign off on his calls.

I think going forwad Arteta should make all goalkeepers to grow a mustach and a pony tail like David Seaman.

I seem to remember a certain T.Henry who arrived in the UK with a tarnished reputation from his time in Italy. That worked out ok. Let’s just say you can’t make a definitive judgement from a very distant external viewpoint.

Awesome, seems he has learnt from the best managers around and understands that he cant look at every detail like Arsene used to. He has to delegate and motivate and believe in those he has entrusted to get the job done.

The club is a bigger and bigger machine than even when Arsene was here, so he seems to understand how to work his voice into being effective at this particular club.