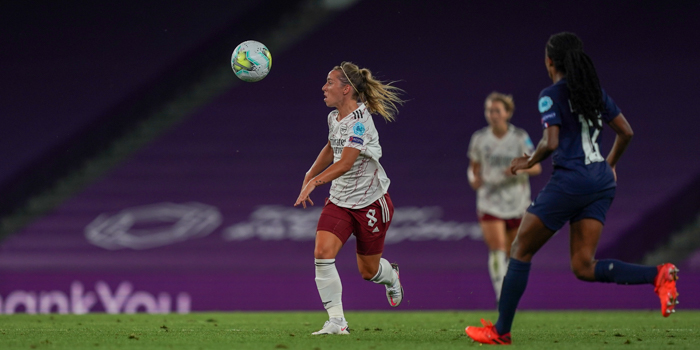 Following her sensational goal to open the scoring against Spurs on Saturday evening, Arsenal manager Joe Montemurro says he has set midfielder Jordan Nobbs “new challenges” this season. Nobbs came back from a cruciate ligament injury at the beginning of last season and slowly started to come back up to her usual level when play was suspended in early March.

Montemurro has fielded Nobbs in an unfamiliar left-wing position in the two opening WSL fixtures, before she returned to her usual central-midfield berth against Sp*rs. I asked Joe about this tactical switch after the 9-1 victory over West Ham United.

I asked Joe what he meant when he referred to “new challenges” for Jordan this season and whether any of them were physical now she is fully recovered from her knee injury. “The main thing is we want her to be more efficient and effective. We know Jordan is very energetic and she likes to be involved all the time but we’ve set her some challenges to be involved where she can be really effective.

“She can take up positions where other players are sometimes, so it’s a little bit about her positioning and a little about how she can create space off and on the ball and that will give her the physical parameters to be a bit more efficient.”

The Gunners head to Manchester for the FA Cup semi-final on Thursday evening [full match preview will go live on the site at 7.15pm Wednesday] for a clash with City to determine who will face Everton or Birmingham in the final on November 1st. Montemurro told Arseblog News that Jen Beattie and Lia Wälti will return to the squad for that game but that Steph Catley will not due to an ongoing calf issue.

Thanks for the interview–interesting. RE Catley: It wouldn’t be a new Arsenal signing, I’m afraid, without a leg injury after one match. Let’s hope she and Roord are back soon.

It may be Joe’s “challenge” but Jordan appeared far more effective vs the Spuds than she did in the Reading and Hammers games. She has been a very successful central charger for years and it is not like we are short of touchline flyers.
Sometimes I wonder if Joe’s attempts to outwit the opposition end up confusing himself. If it ain’t broke don’t try and fix it!
Let’s hope Steph is available soon.

I think Jordan on the left was a temporary thing but I thought she played really well in both games.

Honestly, I read the quotes about 3 times and I couldn’t understand what Joe ment. ? Jordan has probably the best understanding of space in the team (Viv maybe similar). I don’t quite agree that she wasn’t good on left, in Reading she was very good, but I also don’t really understand why play her wide, besides because someone has to. If we are honest we have a problem that Jordan, Jill, Kim and Dvd are all most effective in one position in the team and we can play max 2 at time. Rest have to be accomodated somewhere. Like… Read more »

She is very good at finding space but I get what he means. Jordan has always been a road runner and I think the point is that she doesn’t need to do that anymore because Arsenal have great attackers at all angles. Also, she’s 28 later this year and she’s had a bad injury. I think he’s future proofing her a bit.

Yeah, that makes sense. Although I don’t have any stats for that, but I would assume that her running and pressing stats are way up this year, compared to last.

Funny thing is that although I am not a big fan of Jordan from wide, tomorrow I would absolutely do it, if we had Jill available. We have seen years how England’s defence weakest part is space between Houghton and Bronze and we should absolutely do our best to exploit it. To park Jordan and Viv in there, could be delightful.