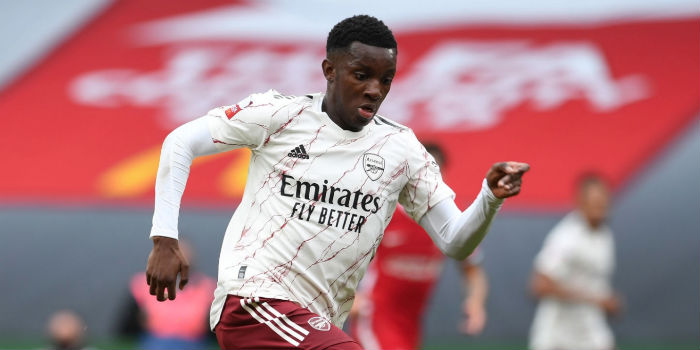 Eddie Nketiah says he used last season’s lockdown hiatus to bulk up and to hone his technique and he believes the hard work is already paying dividends on matchday.

Recalled from Leeds last January, the striker went head-to-head with Alex Lacazette for the right to lead the Gunners line in the final months of the 2019/20 campaign before an untimely three-game suspension tempered his progress.

On Friday, the 21-year-old laid down a marker for the new season by grabbing a 10-minute hat-trick (video) as he captained England’s under-21s to a 6-0 win over Kosovo.

Having also put in a sprightly shift during the Community Shield, he’s now hoping he can continue his form into the new domestic season.

“During lockdown, I worked really hard on getting bigger and better on the ball,” he told reporters after the win in Pristina.

“I’ve used the time well and it’s good people can see the hard work. It’s something I wanted to do.

“As you go through the levels, it gets a lot harder physically so to be able to show your technique, you need that strength to cope with it. It’s nice to show that off a bit on the pitch.”

Nketiah also revealed that his parents played a big role in keeping him focused during last season’s three-month hiatus.

“They made sure I was eating the right food and had the right gym equipment,” said Nketiah.

“They’re very demanding parents who are always trying to get the best out of me. It’s great to have that support.”

Nketiah and Smith Rowe determined to impress at U21 Euros

Got a feeling this guy is going to be special for a long time to come!

Starting to look that way

I’d think so too if he can score a goal that’s not a tap in and can actually hit the target from outside the box, or hold up play successfully without losing possession so easily, or knows how to dribble and turn and beat his man, so far I’m yet to see what’s really special about him. All the goals he scored at u21 England team was literally all tap ins and head tap ins. good poacher but nothing really special about him,

A poacher who doesn’t miss a tap in is an asset to any team. Ruud wasn’t Ronaldo, or Raul, or Morientes even. But he won Real Madrid the league by just being where he needed to be and putting the ball in the back of the net.

strikers can strike…whether its in the box or outside..how can you be a top top striker if you can’t strike the ball from outside of the box and at least hit the target 8/10 times??? Ronaldo, Mess, Auba, Laca, Sanchez, Lewandowski, Suarez, Pepe, Kane, Salah, are all very deadly from outside the box from anywhere really thats why they’re top strikers.. they score tap ins they score headers and curlers but they also score a great deal of long range shots from outside the box because sometimes its fine margins and the very best pull out the most difficult strikes… Read more »

It’s to hear that he’s keen to improve his game. Let’s hope that his shooting from outside the box is on his to-do list too.

I’m not so fussed about that, only very few shots from outside the box go in.

I’d much rather he concentrates on getting into good positions in the box and finishing well whenhehas the chance. I see him more of a Wright than an Auba.

He needs to work on holding the up the ball up front and linking the play better, but his finishing and confidence is amazing. He will get better and with more games under his belt. Nketiah is our fox in the box.

This is the feeling that I get about AMN– now. That his switch ‘just flipped on’ late this last season. Played like a man. Arteta put him in positions to excel.
Eddie’s on that path. It will be apparent– when it happens.

Eddie needs time to come into his own. Auba and Laca are two big names in the same team with distinct strengths and styles. Some players hit their stride early and mark down their place in the squad (Rooney, Ronaldo, Anelka, Rashford), some need to adapt to find their niche (Henry, Kane [aka Shitface], Auba). Eddie’s adapting.

Not the finished article yet as others have implied but certainly one to watch. I think weare beginning to rely upon Auba far too much now and we would have big problems were he to be injured or suspended (or leave, as that new contract still remains unsigned I think). Not suggesting Nketiah is in his league, but have several talented options will help.

It does seem that way although Laca and Pepe have both scored a lot of goals in the past. We might well be able to adapt.

I feel bad when people only refer Saka and Martenelli only as our star talent. Nketiah has came a long and good way in the line too and is very close to them.

His first touch, close control, awareness and finishing has improved a lot. He is never afraid and works tirelessly. He got 3 goals just by pressing defender’s and goalkeeper.

He can be a hugh talent. What he lacks I feel is the flair, long range finishing and throughball passing.

The others two started tearing it up immediately. Provided they can stay fit they look pretty much nailed on.

Still not sold completely on him yet. Until he starts getting on the scoresheet abit more often for the first team the jury is certainly out. I do like how much effort he puts in with his closing down and harassing of defenders which is helping our system as a whole. Hopefully he can aim for 10+ goal haul this season and build from there.

15 months ago, i met a bloke who was very keen to tell me Eddie would never make it. i’m always amazed how many people like to look wise with young players, when they honestly don’t know how things will pan out. They are trying to look clever by playing the law of averages i think. Now, i don’t think all the younger players will have end up having stellar careers but i;m old enough to remember that adams, keown, rocastle, thomas , merson and hayes all emerged at the same time, 5 of them had good careers and became… Read more »

Agree. He looks to be able to get into position to score, and now he needs to continue to work on his scoring technique. I remember we had a guy that got injured a lot in his first years with Arsenal, and when he played couldn’t hit the broad side of a barn. Then for about three years, every shot he took seemed to go in. (Unfortunately we sold him to Man U. for a league championship. Theirs obviously.) One never knows about strikers.

A Different George
Reply to  Oregoon

Because of the way he left, we tend to forget that Van Persie was as important to us in his final seasons as Aubameyang is now. He absolutely carried us.

6 mil in the fantasy… BARGAIN

He’s a good player to have around. A player like him is exactly what Sp*rs are looking for due to Kane’s injury problems. Hoping that in a year or 2 time, he kicks on and nails down the striker position. I wouldn’t feel confident as of now if we sold Laca and just had Eddie as the main striker though

Auba plays out wide but he’s the main goal threat anyway. We need more goals from the rest of the squad rather than the CF. Even Spuds have Son and the Brazilian popping up to score frequently. We need a lot more from Pepe, for example.

I hope our young guns get opportunity this season. Saka looks confirmed on the left. But Nketiah and Nelson will have to fight hard to get feature. Which is why I am not particularly enamoured by too many older players either. Willian was signed somewhat in a panic somewhat lazily by Sanlehi to cover for Pepe being erratic on right particularly defensively and he doesn’t win as many take ons as some stat merchants care to suggest. But likely he was also brought in bc of ‘precarious’/indecisive situation in midfield. frankly we could have waited as this is not priority.… Read more »

To me he is Laca’s eventual potential successor at top as much as Martinelli is Auba’s from left. Another issue with keeping Auba is Martinelli. Saka is feature on left so Martinelli will also have a CF role as he is more robust than Auba keeping ball. Thinking to keep Auba may predicate on unavailability of Martinelli till next year but a 3 year contract at 31yrs to me not a great idea. As much as Auba is our main reaper, we need to not also rely on him as a crutch and allow others to breath. Players have always… Read more »

Thank God for your parents, Son.