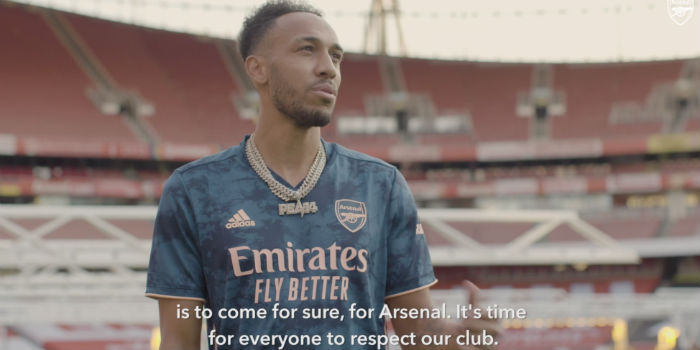 They weren’t allowed to hug or high-five due to Covid-19 protocols, but that didn’t stop Ian Wright and Pierre-Emerick Aubameyang having an emotional chinwag on the Emirates pitch yesterday.

The club’s one-time record-goalscorer greeted the current club captain after he’d confirmed his much-anticipated contract extension and couldn’t help but fawn over the young pretender’s ambitions for the next few years.

If you’ve not watched the video, you can see it here. Alternatively, you can read a few of our favourite snippets, below.

IW: What was your thinking in the end to say, ‘Yes, I’m staying’?

PEA: You know, I had quite a lot of time to think about it, I mean I’m thinking about it since a year [ago].

IW: Is it all you’re thinking about all the time?

PEA: Not all the time. Sometimes you think about other things, but for sure it was one of the biggest things. I also had a chat with Mikel, that I think he gave me something very clear about the idea of the future of the club and about me.

IW: What did he say about you?

PEA: He said…he was straight and honest, and that’s what I like because we’re always honest. He said, ‘Okay, you can maybe leave. I don’t know what your mind is [thinking] right now, but you can leave and go for trophies at other clubs or you can stay here and have a legacy. This, for me, was the key word.

IW: You see you mentioned, the boss? I love the boss already. When you spoke to him, how big a factor was Mikel? Remember, we’re talking about a coach coming in who hasn’t been a manager yet, you’re at the stage of your career where you could go because of the offers you had, he’s coming in to help with the project, you don’t actually know how it’s going to work out. Obviously now we’ve seen it’s worked out magnificently, what was it about him and that conversation that made you say, ‘Yes’? Because he’s been confident that you were going to sign every time you hear him speaking.

PEA: As I said, he convinced me. We had a chat when we were in lockdown. He called me. Normally we have to speak about a game. I had to do a summary.

IW: OK, what do you mean? You have to explain how the game…

PEA: You have to explain how the game works.

PEA: You know? He called me and said, ‘Forget about it.’ I prepared maybe two pages and he said, ‘Yeah, forget about it. Let’s talk about real things.’ He said, ‘I want to be honest with you, how do you feel?’ And I was like, ‘I have to say the truth, I feel very good.’ It was maybe two months, or three months that he was here and the training, you can feel the passion. You can feel everything from this guy. He is so good I mean, and he’s the kind of guy who you can trust in him. That’s why I said to him I feel very good. Yeah, what you said to me about legacy and stuff, I really think about it. I think it is the right way, the true way to go.

IW: How many goals are you going for this season?

PEA: For sure. Look as the guys that came in. I think we can do something very big. And also the young players as well, they are coming like fire and this is why I stay. Because I know we have something to do. I said a few months ago that the best is to come for sure, for Arsenal. It’s time for everyone to respect our club.

Love that bit as well about Arteta having the players to give a summary of the game from their perspective. Makes them think hard about their and their teammates gameplay I reckon. Wonder if that applies to subs as well

We called Wenger ‘The Professor’, but I don’t remember him assigning essays!

A s
Reply to  Zyrth

Me too. I’m wondering if that was only while they were in lockdown with no games though because he says that conversation happened during lockdown

“Time for everyone to respect OUR club”
My captain ☺️

Yes this exactly! People have lost so much respect for us.

Criminal that weighty doesn’t have a statue.

Would have absolutely killed it had he used Wakanda accent for delivering this dialogue!

I think Amy Lawrence was the one who first posited that Arsenal’s board should look to add Wrighty in some capacity (although I could be wrong). Videos like this just make me want to see it happen more.

I’m pretty happy with what he’s doing now and he is totally on board already.
Many of the videos he’s doing are for the official Arsenal website/channel.
Not every Arsenal great needs to become a coach.

Wrighty is an ambassador. And it’s brilliant.

Am sure post retirement auba is going the wrighty way for arsenal ?♥️

He’s a great pundit, too.

The Kolkata Gooner
Reply to  Chris

This is one of the best bits of content I’ve ever seen a sports team produce, bravo Arsenal. Auba has surprised me from day 1, I fucking love the atmosphere around the team at the moment, which I think is largely driven by the captain. Him, KT, Bellerin, Luiz (for all his shortcomings), Ceballos, Xhaka. These guys seem to want to win for each other, for the first time in I’d say 15 years we’ve got a bit of bite. Even Gabriel- to come in and play with no English, having trained for a day or two with the team,… Read more »

If I remember correctly, Gabi is practically fluent — didn’t he already know how to say “Sp*ds are sh*t”?

It’s getting very very hard not to get carried away….

We’re only one game into a new season. That’s what I have to keep reminding myslelf.

But this is as good as I’ve felt as an Arsenal supporter in 10+ years. I’m going to enjoy it for what it is!

“But this is as good as I’ve felt as an Arsenal supporter in 10+ years. I’m going to enjoy it for what it is!”

Echoed my thoughts there exactly. Not only are we getting better results but Mikel has changed the dialogue around the Club. Makes us fans feel good, obviously, but it seems to have invigorated the squad, too! Xhaka, for instance, seems to have completely changed a lot of people’s opinions on him.

I feel so proud to be a gooner right now

As a fan, you want your manager/captain to instill confidence and trust in what they’re doing, the feeling they have and the direction the club is heading.

For me, the last few years felt like we were just treading water with no real sense of purpose to how we went about things. It was more a ‘hit and hope’ kinda thing.

So refreshing to have people like Mikel and PEA. I’m so excited to see where they’ll lead us in the future.

Love Wrighty even more. Legacy man! he deserves his statue

I loved the part when Wrighty ask him to end his career here, I’d love to!

When will ian finally have his statue at arsenal he clearly deserves it?

Surely now Stan should invest in his own club. We got a manager who has made us better, we won the fa cup, we kept Auba, and NOW is the time for Stan to step up and back Arteta in the market. We shouldn’t be forced or even think of letting Holding go, we should get Partey, or Aouar or both if Arteta feels we need them. Stan be a f*cking man and spend some money.

Not a chance in my opinion. It’s the shit*y end of the stick for us, that’s true, but after all this time he’s not going to change. In any case, money is being spent elsewhere in his sporting empire (largely on a new ground for a team/franchise in the US, I read). We are where we are regarding the owner and will, I fear, just have to get on with it within “self-financing” constraints. We’ll have to sell players to balance the books, provide funds for Arteta etc and those players will be the ones we can sell (as they’ll… Read more »

So you think giving all that money to Auba has nothing to do with Stan?

You have got to read this. The man hasn’t spent a penny from his pocket in 5 years. What makes you think he is going to start spending all of a sudden?

We’ll count ourselves lucky if Stan doesn’t draw anymore payments out of the club. Mm I guess he won’t in the short term, since there aren’t any gate receipts during the pandemic & we’ve just laid off 55 employees.

Interesting. I think we’ll need all of Auba’s goals in the long, hard, slog that’s to come. Far from a shoe-in for a top 4 finish (let alone frankly near-crazy talk of winning the PL) as some Gooners think, I suspect there will be a real battle to get into the CL places because the additional money it brings will be even more important for clubs who’ll see their incomes cut due to Covid.

“this is why I stay. Because I know we have something to do”

This should be carved on a wall somewhere at Emirates.

Wrighty is such a treasure he has so much love in his heart for everyone and so much passion and charisma with which he expresses it for arsenal and the fans.
Then u have Auba who is just such a fantastic human. And the way he interacts with fans, like the guys from arsenal fan tv, like fans outside the stadium, he has time for everyone and it’s just brilliant. Warms my heart. There is no striker in the world I would trade our Auba for. We got the best in the world.

I want an Ian Wright statue. That’s all, and thanks for agreeing.

Wrighty is a character. You have to love him. Wears the heart on the sleeves maybe not the most analytical but never lacks passion. From the football POV Both Willian and Auba decent deals done. From the business end of things a bit more concern considering older players on big pay packages (albeit no where even close to Ozil) We remember Ozil was performing well for us and everyone celebrated his re-signing Now the same crowd cheering on Auba are having a right moan at the German (Who re-signed at 28yrs not 31yrs) So a bit of caution. OTOH I… Read more »

I think what was in our favour was Barcelona’s melt down and the poor management of business there (and squad). Would have been a risk for Auba to go there and that’s assuming they have their ducks lined up which there seems to be still plenty of ongoing back room ‘discussions’. The only other two feasible clubs would the be PSG or Juve maybe (I don’t think Inter have the money). PSG, he has to contend with Neymar’s ego on similar flank. Juve need to sell Dybala to add and are waiting on Suarez (New gaffer in Pirlo) So considering… Read more »

What a fantastic interview between two players of such calibre, albeit one who’s retired. Auba comes across as such a genuine guy, would love for him to nab the Golden Boot this season.

His leadership and professionalism will inspire our team to greater things imho, not forgetting our superb young manager for influencing Auba’s decision to stay. Have not been optimistic in quite a long while. COYG!