THE LOWDOWN
Arsenal must dust themselves down for a WSL game against Bristol City at Meadow Park this Sunday after Thursday night’s chastening FA Cup semi-final defeat to Manchester City. It wasn’t just the result but the performance that will give Joe Montemurro and the team with plenty of food for thought, they failed to really show up for the first 60 minutes of the contest and questions continue to abound over their big game aptitude having lost twice each to Chelsea and Manchester City and once to Paris Saint Germain in 2020.

Nevertheless, they must put that to one side for Sunday’s game against Bristol City. Last season, the Gunners won this match 11-1 with Vivianne Miedema scoring six and creating another four. The margin might not be quite as wide this time given the short turnaround from the painful Manchester City game but they will still be expected to win and win well and maintain their position at the top of the WSL.

The greatest individual performance of all time? ?

Bristol City have lost 9-0 to Chelsea and 4-0 to Everton in their opening two games, while Arsenal have won 6-1 and 9-1. If the Gunners could have chosen a fixture to nestle between trips to Manchester City and Chelsea in the domestic cups, this is the one they would have opted for. There is an opportunity to take some frustration out on a poor Vixens defence if they choose.

Of course, a lot will depend on their physical and mental condition and given the tough fixture schedule, some measure of rotation is likely even if injuries are starting to rear their head again. Even so, there are few excuses available for Arsenal here, who will be judged not just on whether they win but by the margin of victory.

TEAM NEWS
Arsenal have lost Kim Little to a thigh strain, the extent of which is not yet known [to me at least!] while Lisa Evans is likely to miss out too after missing Thursday night’s FA Cup semi-final with “a hard knock.” Lia Wälti wasn’t fit to play 90 minutes on Thursday, this might be a good game to introduce Malin Gut for her full debut. Jen Beattie was an unused sub on Thursday after returning from a back injury, Steph Catley [calf], Lydia Williams [ankle] and Jill Roord [knee] are still out.

PLAYER TO WATCH
With Lisa Evans injured and Noelle Maritz having started each game so far, Leonie Maier could be in line to start for the first time this season. Maier started for Germany during the international break but the signing of Maritz has pushed her down the pecking order. Montemurro started with a back three at home to Bristol last season with Leah Williamson on the right playing like a wing-back. 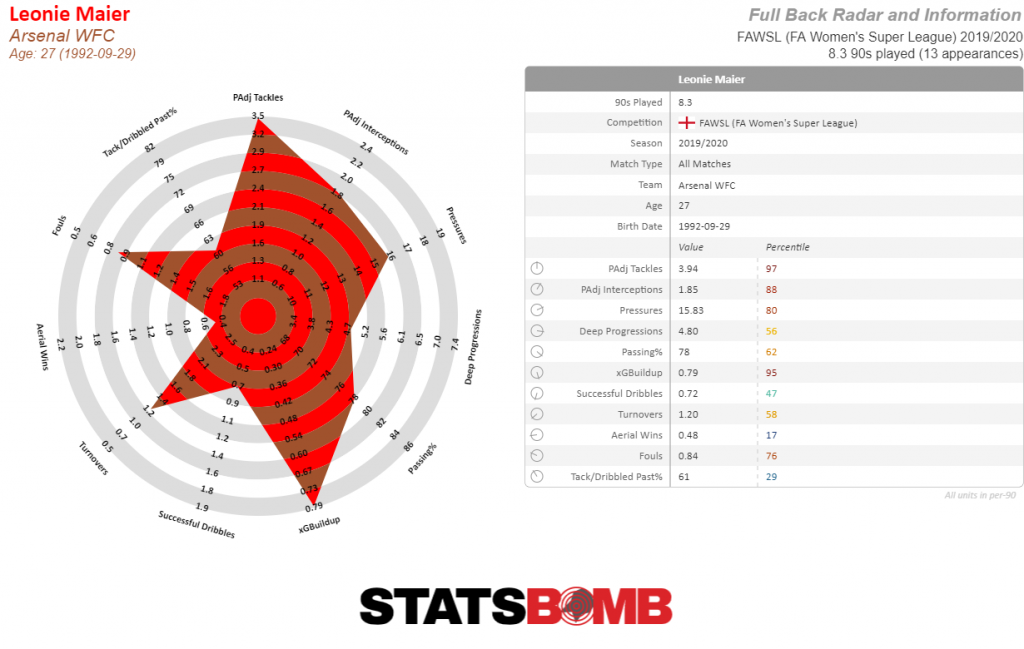 It remains to be seen whether Joe will repeat that trick but Maier does give Arsenal an extra dimension when it comes to pressing high up the pitch and winning interceptions. She averaged 3.48 tackles and interceptions per 90 in the WSL last season- a total only bested by Lia Wälti in the current squad. She also averaged 0.84 counterpress regains [this refers to the amount of times a team won the ball back within five seconds of a player pressuring an opponent] per 90- the highest in the squad. Arsenal will want to keep Bristol hemmed into their own defensive third and Maier’s pressing might help them to achieve that. 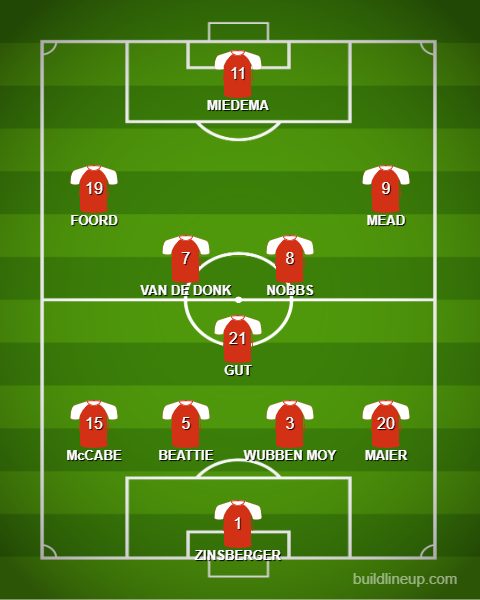 THE OPPOSITION
Bristol City just about stayed in the WSL on points per game last season but this season has gotten off to a tough start for them with back-to-back trips to Chelsea and Arsenal. Back in February they were able to hold Manchester City to a single goal victory and they won 1-0 away at Manchester United in the shock result of the season.

However, the Vixens are finding it tough to compete in the WSL against sides backed by Premier League budgets. Manager Tanya Oxtoby said, ahead of this game, “We’ve said all along, don’t judge us on the first three games. We’ve been in this position before, it’s a very long, tough season, it’s going to have lots of ups and downs but we need to go to Arsenal and really embrace to the challenge which is what we’ve been banging on to the players about both individually and as a group.”

? Time to reflect
? Positive mindset
? Togetherness of the group

ICYMI – Tanya Oxtoby is pleased with reaction of her team as the Robins build towards facing Arsenal on Sunday. #ARSBRC | #BarclaysFAWSL pic.twitter.com/Z4X09F9NBY

HOW TO CATCH THE GAME
The game kicks off at 2pm on Sunday and can be watched live on the FA Player app, which is free of charge and only geoblocked in Australia.

COMING UP
We will have the usual post-match reaction from boss Joe Montemurro on the site on Sunday afternoon, as well as all the usual build-up and match reaction for Wednesday’s game against Chelsea in the Conti Cup.

We have been really unlucky with injuries. We saw the potential of this team when we had our full team A league champion, Conti Cup, and we easily beat top two teams(Chelsea and Man City). Hope they can recover asap. #COYG

Thanks for the preview Tim. Bit concerned about the mounting injuries; let’s hope they don’t impact too much on results. Hope they are able to put the other night behind them and focus on what is ahead. Not ideal that we have come up short against Chelsea and City (Conti cup semi-final excepted), but it often feels as though we don’t have the first choice 11 available. If we can continue to beat everyone else, which is becoming more difficult, we may yet be successful. By the way, are the Bristol City Women known as the Robins rather than the… Read more »

Not only would I like to see Lotte, Leonie and Malin start tomorrow, surely time for Fran to make her debut.