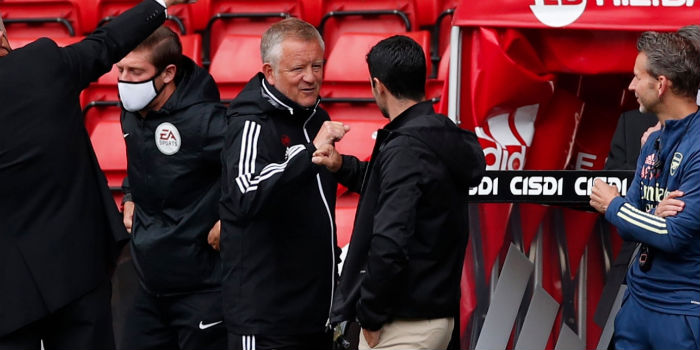 Mikel Arteta has revealed he’s been following Sheffield United’s progress for a couple of years and is impressed by the club culture introduced by Chris Wilder and the coach’s tactical tinkering.

The Blades were promoted to the Premier League after finishing second in the Championship in 2018/19 and enjoyed their return to the top flight finishing ninth last season. At one point it looked like they might even qualify for the Europa League only for a late-season stutter to dash their hopes.

“Incredible,” remarked Arteta when asked about Wilder’s work. “I start to analyse his team two years ago to understand some of the things he was doing and I think him and the coaching staff have done a really, really good job.

“Not just for the way they play because it is a very clear style, but for the culture, they created around the club and this feeling that you can sense around the team and how they compete. I think it is remarkable what they have done.

He added: “I was told by someone that we had to have a look at them, and I always like to see different trends, different ways of playing, formations, structures, patterns, and I was impressed with some of the things they were doing. It is always good to have this information.”

This season a trio of defeats to Wolves, Aston Villa and Leeds has heightened pressure on Wilder but the Yorkshire side have signalled their intent to consolidate their top tier credentials by committing £23 million to the signing of young Liverpool striker Rhian Brewster.

Reflecting on the Blades matches so far, Arteta went on: “The margins in the league of winning, drawing and losing are really small and the details are crucial, but they have generated big chances every game and they’ve been really unlucky in my opinion not to get anything out of those games.

“We have experience of playing against them both in the Premier League and in the FA Cup so we know how difficult it is to play against them. The season they had, the way they have evolved as a team since they joined the Premier League has been unbelievable, the work that the manager has done with the coaching staff with the resources they have is remarkable. We need to be really alert and we have to play at our best again.”

With a second Interlull of the season coming up and a tough run of fixtures after it, Arteta is desperate for his players to get back to winning ways in the league following Monday’s defeat at Anfield. Against a side who took four points from us last season, it won’t be easy.

“I hope we can go on Sunday and grab three points because it’s going to be really important for us before the international break,” said the boss.

“The differences are in both teams and I think you will notice some changes in structure and players. It’s a different game [to last season] but we know what we’re trying to do and how difficult it will be. They have the necessity for points as well and that will make the team even more ready for it.”

Always praise your opponent. Before you beat them.
Arteta master of class

True, but it looks equally good if we don’t as well.

Was overdone against Liverpool in the 1-3 defeat. Arteta was supposed to say that we managed to beat them in recent games and will try to achieve that again. Instead our players felt like atoms in front of the Everest.

Anything other than 3 points isn’t good enough.

I love that Arteta has respectful relationships with his fellow managers. But you do wonder how long it will last. You can’t stay the nice guy forever, even Wenger had touchline spats and massive fallouts.

I’m just interested to see who it’s going to be. I hope it’s Lampard. After the way he spoke to Klopp during their 3-0 drubbing he deserves being taken down a peg or two.

That’s a good point. The pressure of a full season could begin to tell but Arteta may just be lucky and have that kind of personality to keep an even keel (or keep “blow ups” private, at least). Wenger certainly began to lose it particularly in the second half of his tenure. You can’t be the wonderkid on the block indefinitely and others copy, catch up and eventually overtake.

I think Lampard may be on shaky ground anyway as Comrade A hasn’t got great reserves of patience as we know (unlike cash, which we also know unfortunately).

Very true my man. I’ve always loved Rafa Benitez’s quote about his relationship with Jose. He said “Me and Jose were really good friends. Until Liverpool started beating Chelsea.” I think there’s a lot of truth in that. I could see Pep getting pretty pissed if his apprentice knocks him out of another competition. And I think Klopp deep down thinks we’ve been really lucky against them. One more time could tip him over the edge. No one likes people who win all the time. It’s a fact of life. So, baring that in mind, I hope that Arteta is… Read more »

The first one will be against Mourinho.

No it won’t, unless laughing and pointing while Mourinho goes apeshit at his own players counts.

After Wenger left, I found myself skimming over his comments and mostly reading the comments. They were far more entertaining and articulate than reading the transcript of Emery’s press conferences. It’s so refreshing to have a well-spoken, intelligent manager again. I have such a good feeling that we’re headed in the right direction under Arteta. Here’s to hoping for 3 points tomorrow!

Emery wasn’t fluent in English. If Wenger goes to Saudi Arabia and tries to speak their language, it will sound like Emery.

The Cannons should be blowing the Blades away.