Leeds 0-0 Arsenal: By The Visuals

Arsenal managed to escape with a point in a 0-0 draw away to Leeds United at Elland Road. Arsenal struggled to cope with Leeds’ intensity throughout and their task was not made any easier when Nicolas Pepe was sent-off for headbutting Ezgjan Alioski 5 miniutes into the second half. Mikel Arteta’s side were quite fortunate to escape with a point, as Leeds hit the woodwork on numerous occasions and Bernd Leno made a string of good saves to keep the scorelines level.

Let’s delve into the data to see if we can gain any insight into what was a tough game at Elland Road. 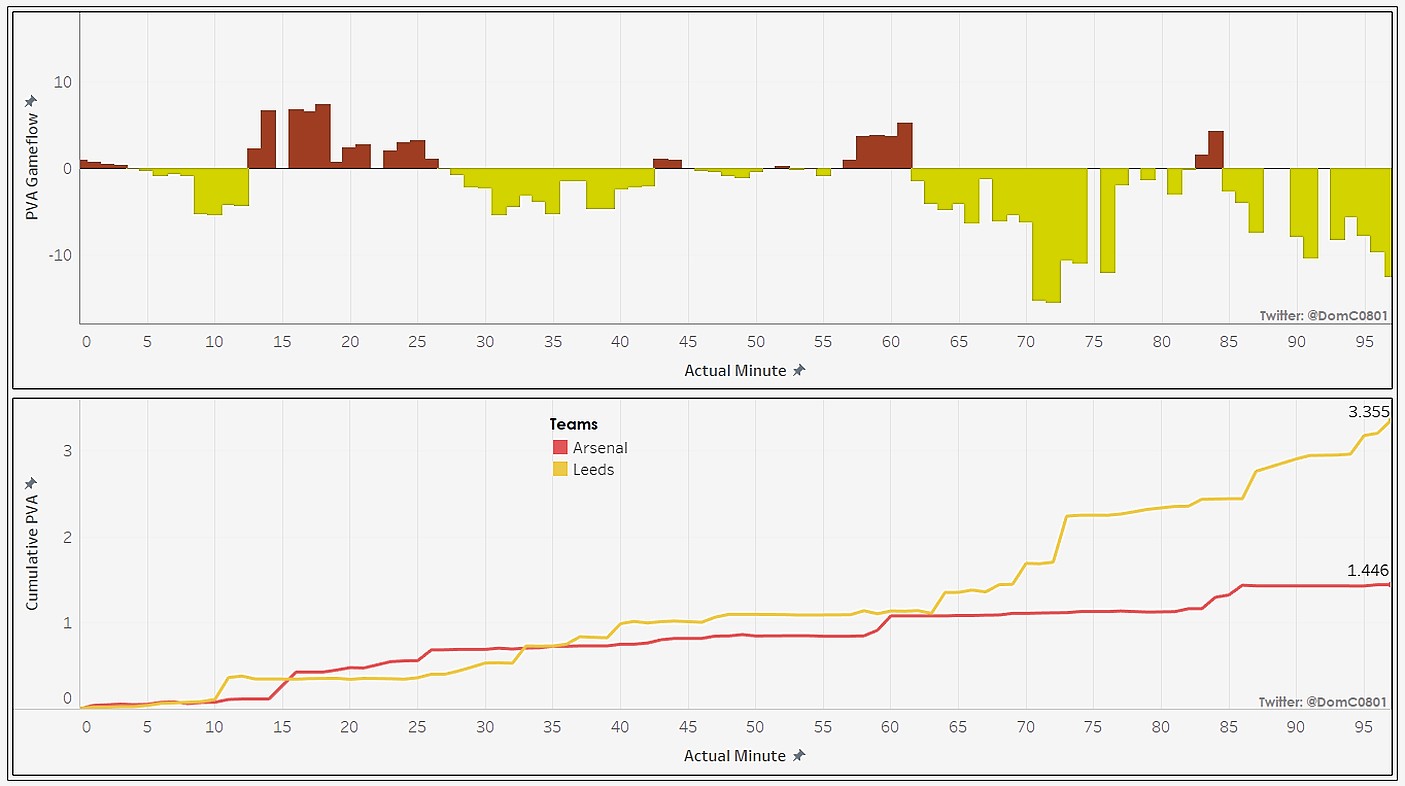 Above are the Possession Value (PV) Gameflow and the Cumulative Possession Value Added (PVA) for both sides. Although Leeds had more shots than Arsenal before the red card, Arsenal were still in with a decent shot and were still posing a decent threat themselves, but after Pepe’s dismissal the Yorkshire side dominated and pinned Arsenal back. Bukayo Saka had a good 1-on-1 chance set-up by Hector Bellerin and Kieran Tierney had a few gallops forward, but other than that Arsenal struggled to land a glove on Leeds after the dismissal. 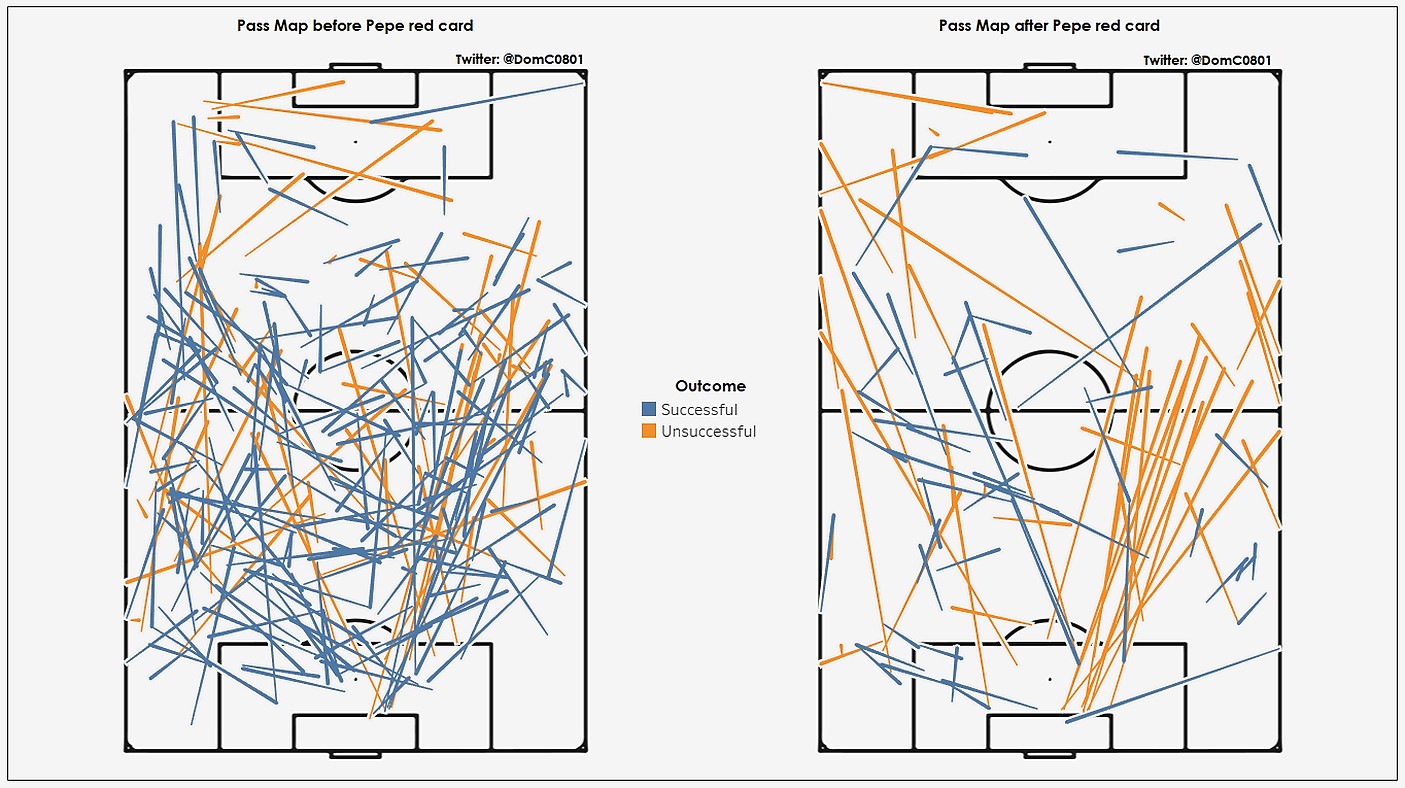 This is further shown by the above Pass Maps before and after the red card. Strangely, Bernd Leno seemed to have been instructed not to take short goal-kicks, with Mikel Arteta perhaps wary of being dispossessed by Leeds’ high-press. In my opinion this is also a product of the switch to a back 4, as Arteta perhaps feels there is less security if possession is lost in build-up play. 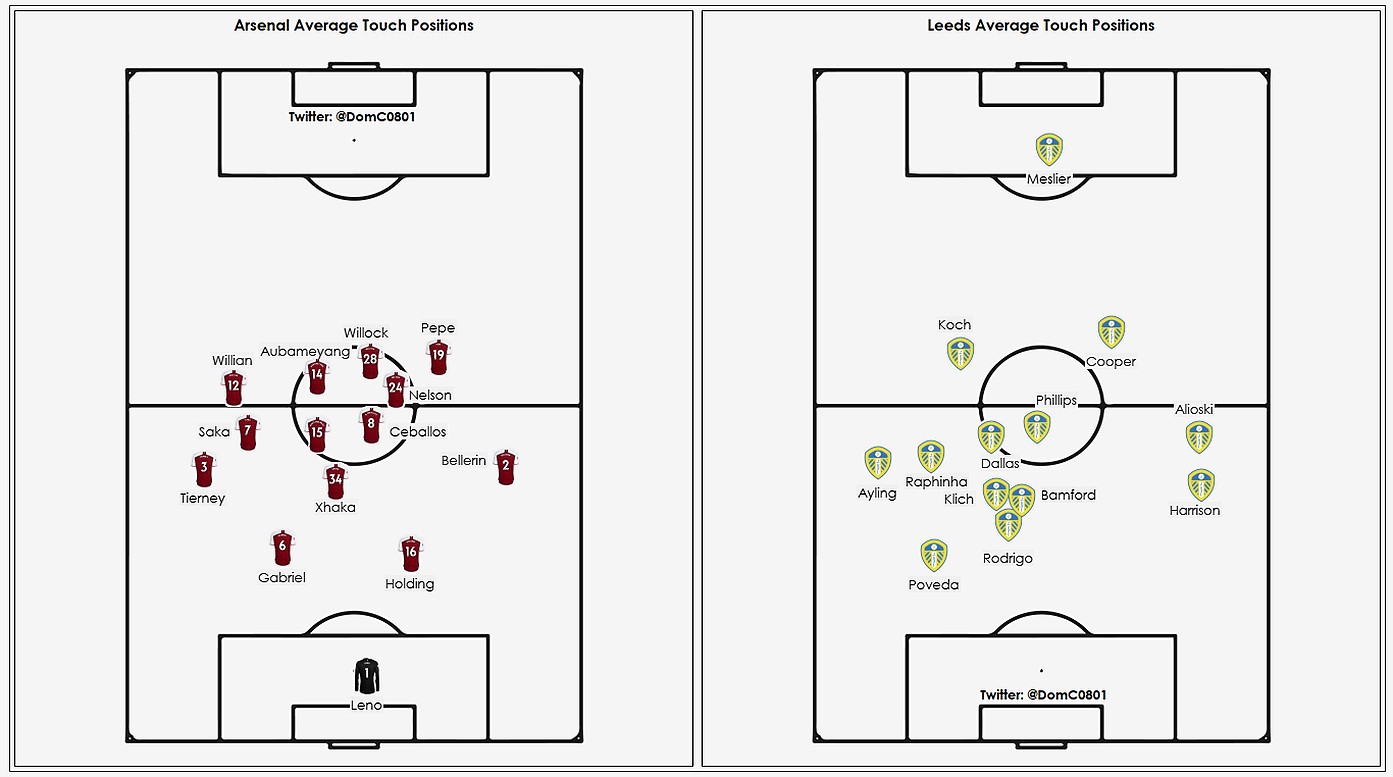 Above are the average touch maps for both sides, with Arsenal’s direction of play going up and Leeds’ going down. What is instantly apparent is how committed Leeds’ full-backs were to getting forward, with Alioski and Ayling almost acting as auxiliary wingers. That was especially apparent on Arsenal’s right-side in the first half, as Hector Bellerin was left 2v1 against Alioski and Harrison who kept his width and doubled up on the Spaniard. 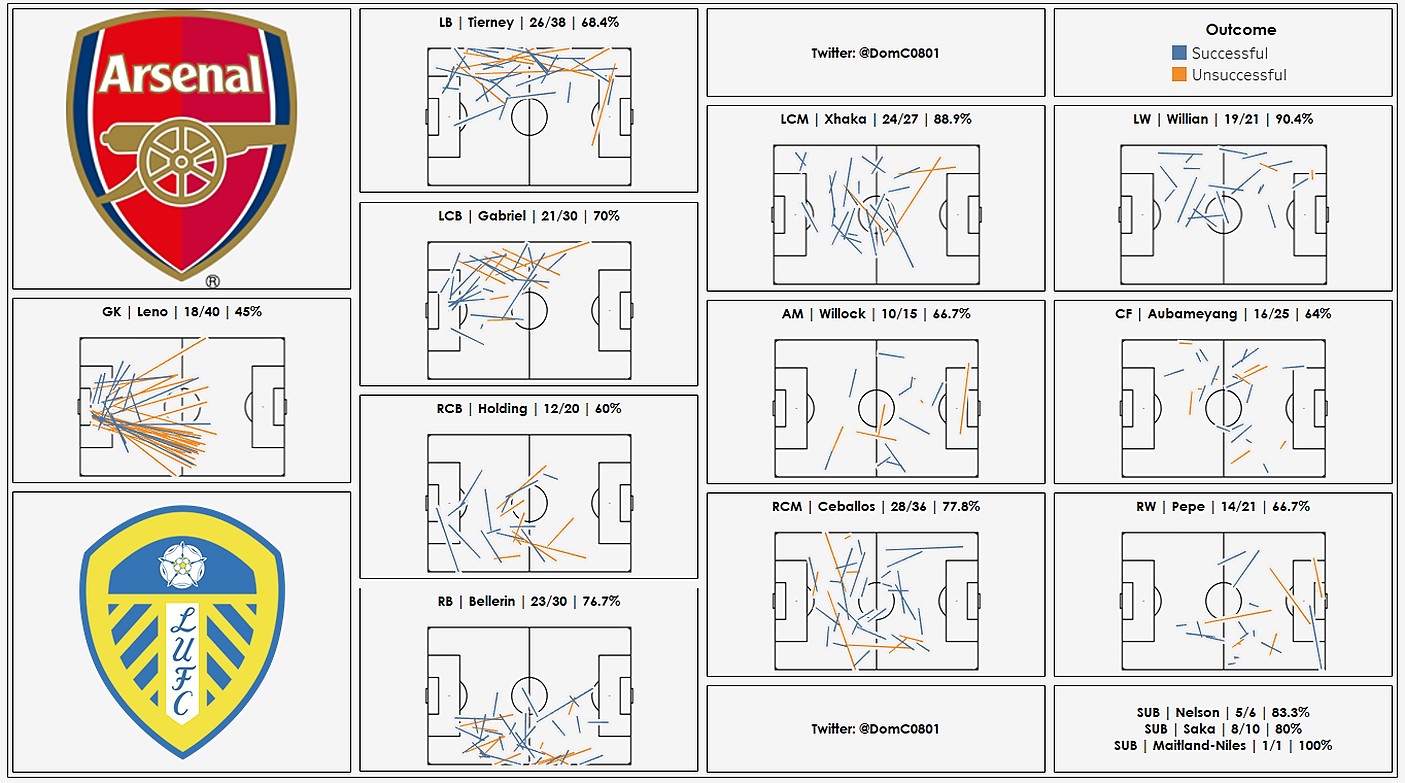 Above are the pass maps for each of the starting XI from Sunday’s match. What is immediately apparent is the dearth of passing in the Arsenal side, with Dani Ceballos leading the way for completions with only 28. Bernd Leno’s kicking was erratic and much longer than usual, with Leeds’ high-press likely to be the reason for this as discussed earlier. Arsenal’s midfield struggled to get into the game, with Leeds’ athleticism in midfield overwhelming the Gunners who simply couldn’t get a foothold in the centre of the pitch.

Above are the Open-Play PVA percentages for each player from Sunday’s game. Kieran Tierney and Bukayo Saka led the way, with the Hale End graduate showing his quality in a 35 minute cameo that put his more experienced teammates to shame. Meanwhile, Aubameyang, Willock and Pepe struggled to make an impact in open-play, with their passing resulting in Arsenal having less chance of scoring than they did before they passed the ball.

If I had to look for one positive from the game (other than the fact we salvaged a point from a position where we looked doomed), I would point to Pierre-Emerick Aubameyang who had more shots at Elland Road than he has had in an any game since the opening day victory away to Fulham. Hopefully we see him get a run of games in his natural position.

Anyway, it’s a trip to Molde for Arsenal on Thursday, before they welcome Wolves to the Emirates as the Gunners look to avoid losing three consecutive home games in consecutive seasons.

Very interesting, thank you. I am currently watching Wolves vs Southampton and I have to say both teams look miles ahead of Arsenal, Sunday night could be hard going. The way both teams are attacking as a unit is impressive, but surely a simple fix for Arteta.

I agree, we are miles off other teams. I watched Villa vs Brighton, and Brighton really impressed me how well they played against Villa. I am sorry to say this, unless Arteta can pull a rabbit out of his as *s we wont finish in the top 8th this season.

People talk about Auba being wasted on the left, which is true, but I also have the same opinion on Pepe’a current predicament. I fully believe he’s an extremely good finisher with pace and bags of tricks. These are not the ingredients of a bad player. I think the current system does him no favours and doesn’t play to his strengths. I’m not sure of the answer but I’m not paid millions a year to do this. Surely there’s a way to get more from a 72 million signing?

Please tell me when Aubameyang hasn’t been played on the left since he has been at Arsenal.

Aubameyang in his previous career has been most effective as a striker. I understand he played most of his time on the left but it wasn’t as a traditional winger it was a system designed to get him into scoring positions which has now malfunctioned. He has poor passing ability and is not good at taking players on. He’s lighting quick and a lethal finisher, a bone fide striker.

I also thought Pepe had pace, until I saw Bernado Silva run past him multiple times when we played Man City….

Emery didn’t want Pepe and Arteta doesn’t rate him either. With his talent, we should give him a run of 10 games during this season. Then you can judge if he stays or goes.

It’s not as if we are going to trouble the top of the table, so Pepe will be a lot more fun than the current front line.

Very good points made by these fellow fans. I feel defensively we have made big steps but attacking wise a lot of work has to be put in at the training ground.I look at them down the road and they are top of the league but nothing special. The only difference is they have taken their chances in front of goal which we haven’t.We can’t continue to miss crucial chances game after game.There are fine margins between winning and losing so our finishing has to improve if we are to climb up the league table.

I’ll be straight here. I think we are missing Martinez’ accuracy in long kicks. It was a real weapon and teams would guard against it.

Combined with attackers favouring the side of whichever Gabriel isn’t on, in this instance holding. You know hector will be pinned back and we lose balance in the attack. Meaning teams will happily double up on Auba without worrying about Hector.

Very interesting and my issue is this. All we need to do is spend money on a CAM that can link the midfield to the attack consistenly. That’s where we’re lacking. I actually believe Willian and Pepe would play better with someone in that role. If Ozil (or insert any world class CAM) were playing and on form, I don’t believe we’d be struggling. I actually rate Luiz but only in a back 3. I rate Pepe but he needs someone to unlock him. Willian I also think is a great player and if he had a someone to bounce… Read more »

What’s the point discussing Ozil? He isn’t in the PL squad until January and may sign a pre-contract with any suicidal club at that point. You don’t play a guy who has his mind elsewhere and doesn’t want to get injured.

Well he’s an Arsenal asset. But I made sure to mention “Or insert any world class CAM” since that’s the real point. Who is joining us up?

It’s nuts how easily he is scoring. I know it didn’t work out for him at Arsenal, and I know the cock up with the Sanchez deal is something the club will never live down, but there was some excitement at Mhki’s arrival and he did have some promise to provide creativity on the wings and goals. But …

Look at Cazorla too! Oh how we miss our Santi.

Giroud type player will help us change play and probably the best answers to our aimless crosses, his ability to knockdown and win second balls and hold up play is something that’s missing in this team. This might open up avenues to play through the center as well, seeing as this is the kinda role expected of lacazette (which he admittedly is struggling with)