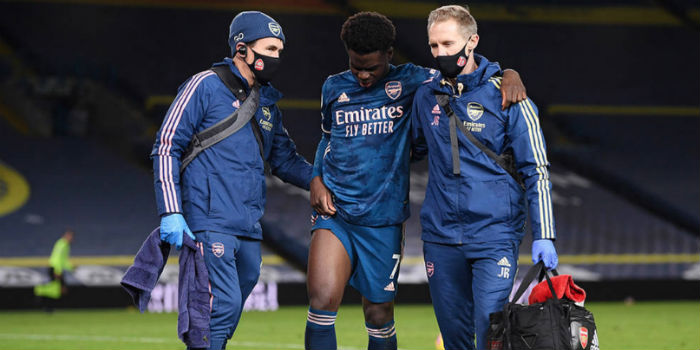 Bukayo Saka will miss Thursday’s clash with Molde but fears of a serious injury have been allayed after Arsenal confirmed he suffered a dead leg in Sunday’s 0-0 draw with Leeds United.

The England international made an appearance off the bench at Elland Road but was unable to complete the match after a late clash with Kalvin Phillips.

It remains to be seen whether he’s available for Sunday’s match with Wolves but at least he’s not suffered ligament damage, something people started to worry about after comments by Jurgen Klopp.

Willian and Thomas Partey have also stayed in London with calf and thigh problems respectively. They continue to be assessed. Meanwhile, positive Covid-19 diagnoses for Mo Elneny and Sead Kolasinac mean they are self-isolating. Saka avoids serious injury

David Luiz has travelled to Norway following the birth of his daughter, while Pablo Mari and Gabriel Martinelli are getting closer to first team returns after extended spells out with ankle and knee problems.

Good news!! Anyone knows how long Partey will be out? The official description is not very clear.. hope to see him on the field again soon, he is such a huge upgrade on the rest of our midfield

Thank goodness for that. If he had gotten injured, a lot of blame would be pointed at Southgate and England for over-using the player. Especially when we’re the ones who would suffer the most from that consequence, both on the pitch and financially (not like England is paying the player’s wages)

Bukayo is the one who would suffer the most from that scenario, thankfully he’s going to be OK.

Finally some good new , that young lad carries our creative hopes on his shoulders.

I’m sure given that he previously wore a cock on his chest it wouldn’t be popular here but there maybe a cut price solution at Inter!

I know what you mean but in the nicest possible way, I hope he doesn’t. To think that a club the size of ours, with a huge (rather too huge truthfully) squad of expensive players, has to rely upon one youngster – very talented, don’t get me wrong – for creativity would be truly worrying, wouldn’t it?

Ideally Tierney will be rested as well, probably means AMN at LB/LWB.

It’s sad, back in a place where its hard to be excited for Arsenal games

Maybe it will pick up again when fans are allowed back. There are few players in need or the crowds “guidance”.

I wasn’t excited in the George Graham days, but boy was I happy!!

Completely unrelated, but I would be beyond happy to see Jack Wilshere come back on a merit-based ‘Pay as you Play’.

We already know he has the talent. He works hard. He’s well loved. He obviously knows Mikel and I think he’s the type of player Mikel likes. We also need strong, creative forces like him.

Bring back Super Jack now, get him in to training. See if he can be squad ready for January. Lots to gain, little to lose.

Not if it blocks the development and first-team chances for Smith-Rowe or Willock, who I think have been working hard and deserve more than a fleeting glimpse here and there to become the next Wilshere (without the injuries, one hopes), and next Arsenal hero.

That’s true, but in hindsight is rather us have got Jack back on a free and cheap wages than sign willian

Jack has been poor for a long time and when he did play for West ham, they were better with him off the field than on it. With arsenal’s current situation he would be extra baggage that we honestly would do better without.

No, Jack has been poor for a long time and would waste a space in an already large squad. His talent hasn’t been seen in a long while and we’ve got better youngsters coming through.

I choose to believe accumulated injury/fatigue problems are responsible for our bad form. Really hoping to see ESR today and I can’t wait to watch Martinelli again.

We’re playing tomorrow Nate. Can’t wait to see the youngsters given a chance.

Wow, really? I wasn’t prepared for Europa League on a Friday. Now I know why the lineups aren’t up lol

When we work from home, it happens.

We are still on Wed, the match is tomorrow like Vince said (and its Thurs).

It’s Wednesday all day and will remain Wednesday until it’s Thursday.

That’s how it works.

He’s still got one living one, I fail to see the issue.

T’is but a flesh wound!

A bit concerned about Partey. Was hoping to see he’d be available for selection on Sunday but it says progressing rehabilitation :/

I wrote recently that we should not put it in Sakas young shoulders to carry the team, let’s remember what age he is. But as a secret I share with no one I see every sign in him to take on a dominant role in our final 3rd, his intelligence, ability to drive past players and end product quality is of highest quality, what a gem

Jurgen Klopp, who pointed out that Saka played in three matches for England:

“If someone tells me again about [TV] contracts, I go really nuts. Contracts were not made for a Covid season. We all adapt. We stand here in masks, we adapt. Everything changed but the contract with the broadcasters [who say] – ‘we have this so we keep this’ – What?!”

Tell you what I’m very excited for Martinelli to be back. I think he can take some of the burden of Saka as our only creative player that looks like he wants to drive forward and win games.

Saka, Elneny, Luiz, Mari, Martinelli, Kola, Partey, Willian. Seems we are usually occupying a hospital wing while playing the other’s best XI. Regardless of whether we are as talented or creative as we’d like, having continuity match to match would go a long way to winning.

Injury or not, he should be rested for PL games. He’s quickly becoming our most important player, which says a lot about some of the senior players.

Sad news about Diego Maradona. The guy was a complete genius. My top five ever:

RIP, Diego: you lit up the world!

Fuck, it is a full time job being an Arsenal supporter. COYG

It will be good to get Martinelli back, though will take a while to get to 100%. I think he can be more of a difference maker than Lacazette or Nketiah up top or even on the wing.