Arsenal 4-1 Rapid Vienna: By the numbers

Fans back in the stands!

The ball pinging around on the carpet!

Sure it wasn’t the toughest competition and there really isn’t much that we can learn about how this will translate into the Premier League but it was still fun to take a break from doom and gloom for a night. We can go back to worrying about the North London Derby tomorrow and take a few hours to enjoy a good performance for a change.

Arsenal 4-1 Rapid Vienna: By the graphs 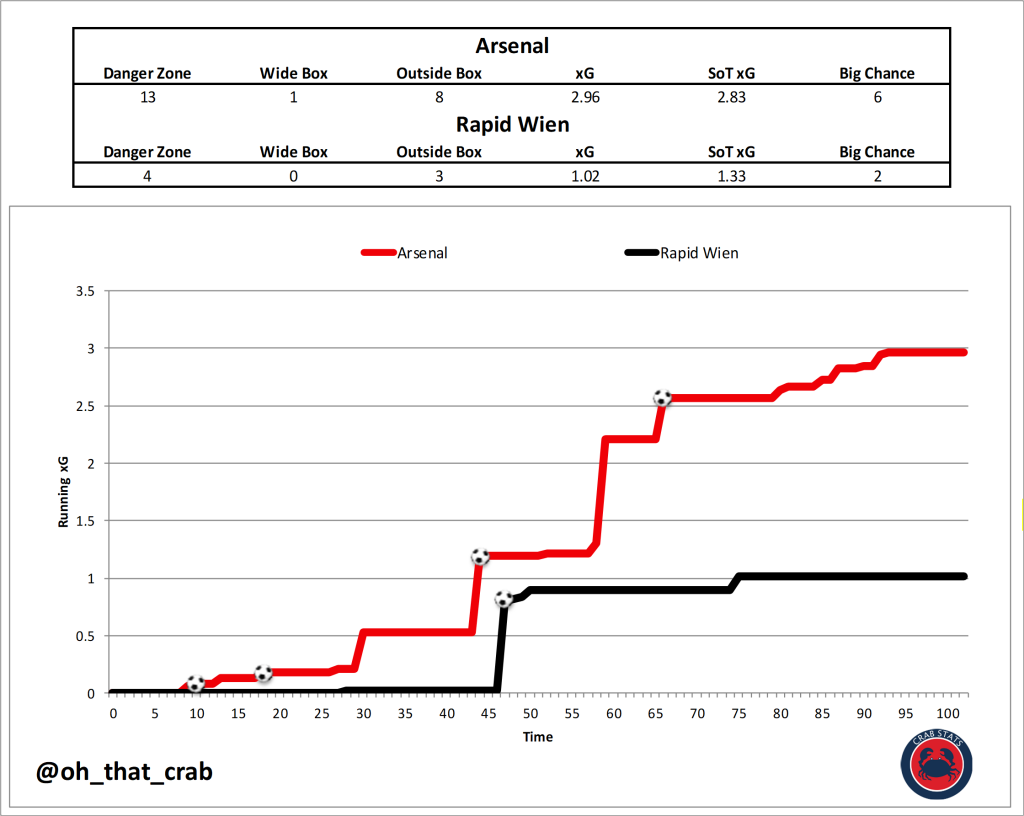 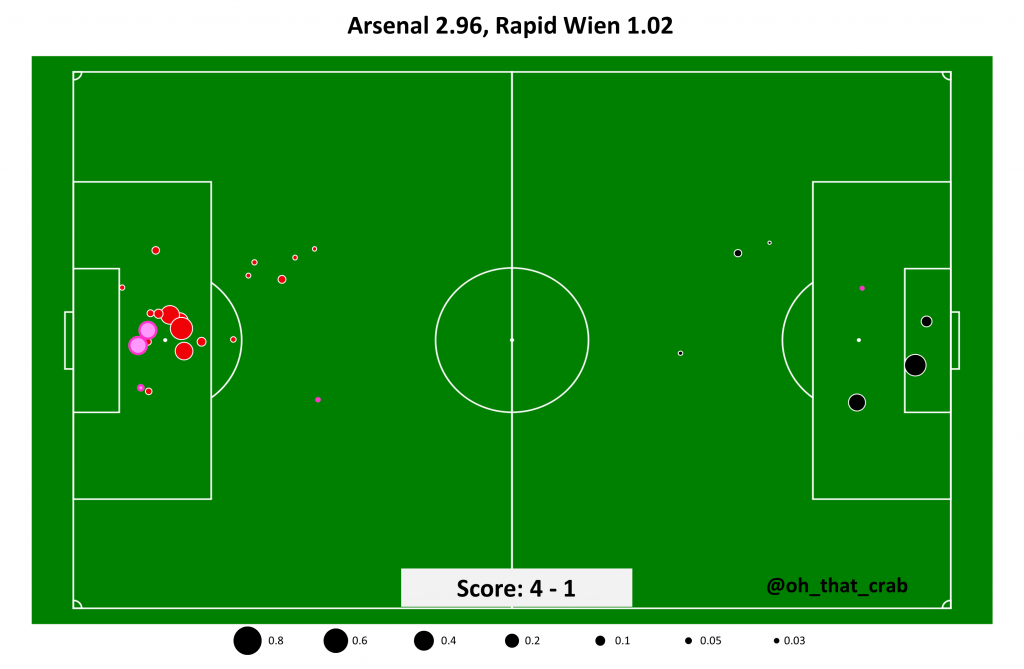 Arsenal 4-1 Rapid Vienna: By the numbers

22 – Shots for Arsenal, 2nd most shots that Arsenal have taken in a match this season (first was Dundalk)

8 – Shots in prime locations for Arsenal, the most Arsenal have had in a match this season

11 – Shots on target, the most shots that Arsenal have had on target in a match this season

3 – Expected goals, the most Arsenal have had in a match this season

4 – Goals scored, the most Arsenal have had in a match this season

24 – Passes completed into the box

There are a few things that really stuck for me in this match. First, it was really nice to see the team put together attacking moves from open play that ended with shots. One of the major frustrations of the Wolves match was that in open play Arsenal really struggled to create from open play and were left to try cross after cross.

I know Mikel Arteta came out defending that choice talking about how good teams will cross the ball (which is true but not all crosses are the same), the crosses Arsenal did in that match were probably the lowest quality ones where the players being aimed at are static, the defense is set and can watch the ball the entire way and it will almost always be cleared without a major error. In this match Arsenal was able to move the ball quickly between the players, using the third man runs into open up space and things looked so much better.

The second thing that I really enjoyed was that the spacing and system seemed to look so much better in this match. In the Wolves match the passing network looked like a horseshoe around the halfway mark, in this match well look below and see how much better this looks. 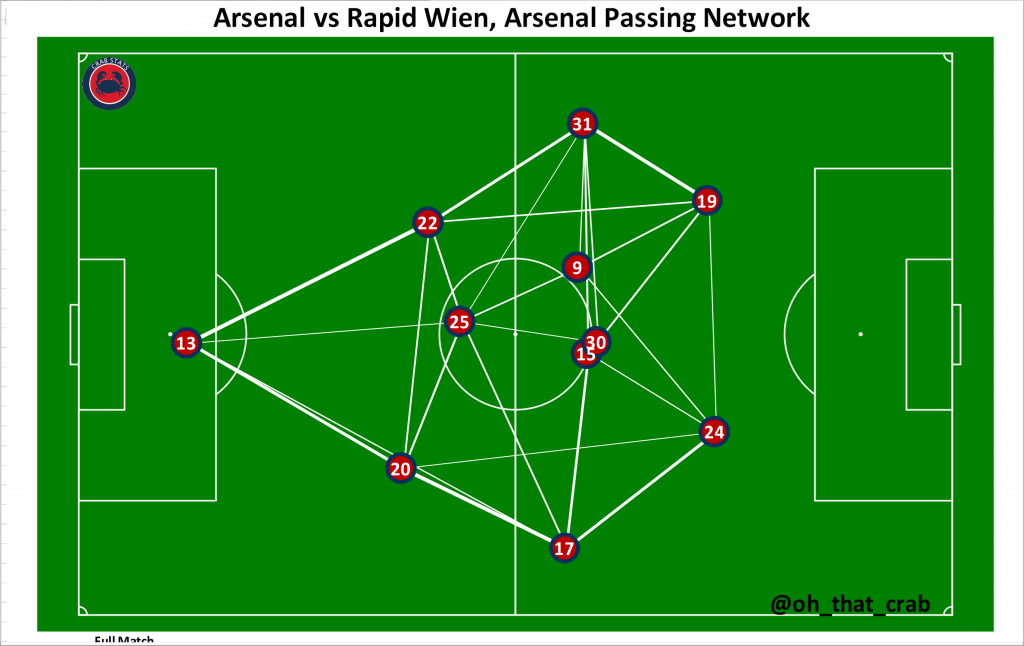 This looks pretty much exactly what you want from a 433/4231 system.

5 – Dribbles completed out of 11 attempts

5 – Passes completed into the box

In this match, it was pretty obvious that there was no one on Rapid Vienna even close to the same talent level as Nicolas Pepe. He was a threat to beat his man every time he touched the ball, maybe to the point that he got a little too greedy in trying. He was central to almost all of the attacks that Arsenal had with a team-leading xG Chain of 1.9 (73% of Arsenal’s open play xG).

He did lose the ball a little more than I would like, but this is a very good example of the risk-reward of a player like Pepe. The things that he was able to make come off more than outweighed the times that he turned the ball over. By my attacking value-added metric (similar to the possession value-added that Dom uses in the by the visuals) he led Arsenal with a mark of 1.22, more than doubling Cedric Soares’ 0.46 in this match.

It might be a blessing in disguise that he was forced to play in the lower pressure Europa League matches to get back some of his swagger, and I really hope that this is something that carries over to the Premier League.

2 – Passes completed in the box

Ainsley Maitland-Niles was given a role similar to the one that Joe Willock has done recently. Starting as a midfielder but given license to move forward. His athleticism seemed well suited for this role, where he could make runs both with the ball and off the ball from deeper locations into the box.

I am not sure that Maitland-Niles will quite have the technical ability to play in midfield in the Premier League but he did make a pretty strong case that at least in the Europa League he deserves another chance.

Lastly, a request, can you take the time to take this survey on how you feel about Arsenal as part of my monthly approval rating series. Thank you very much.

Sources: Opta via WhoScored, my own database

Leeds United 1-4 Arsenal: By the numbers

Thanks for the rapid turn around!

A big Wien for us

I saw what you did there

In Arsene We Trust

If only we could play Dundalk Molde and rapid every week instead of teams like Aston Villa, Wolverhampton wanderers etc. We could actually challenge for the league.

Would be interested to see AMN instead of Ceballos in the Premier League — he has defensive skills (though we’ve seen them on the wings more than in the center), he can push forward, and I think Ceballos makes a decent number of mistakes/bad touches that offset any edge he might have in technical ability. Not sure if Ainsley can pull it off, but worth a try. Also curious if the Pepe stats, specifically dribbles, account for his being double-teamed quite often; saw at least a couple times he was cornered lost the ball trying to dribble through but didn’t… Read more »

Ceballos will be a goner the moment we have a better creator in MF. I agree with you that he makes a lot of mistakes for a position that he plays in. If he aims to be at level of say Santi (Who is a legend), he needs to iron out those mistakes from his game.

Absolutely correct.Lets face it he would be in Real Madrid team if he was good enough.On Sunday against Wolves Ceballos and Xhaka got exposed as probably the slowest 2 central midfield players in the premier league.

I think teams have figured out how to contain us. It is to tightly mark Xhaka and Ceballos and force them to pass backwards or sideways because even if movement is there in front, both of them will choke under slightest pressure. Partey could actually break this chain because of his mobility and power. I believe Arteta found that he cannot have a world beater CM in near future and hence got Ceballos back for one more year as a working solution. I hope Arteta gets his wishes in coming summer (unless KSE succumbs to deluded fans who are calling… Read more »

I mentioned this on another article, but I think people on here have gotten the wrong end of the stick when it comes to Ceballos. It’s clear to me at least that he’s capable of doing much more in attack, but he’s being asked to play very conservatively by the manager, covering for Bellerin’s runs so he can provide crosses and support out attack out wide. He’s doing his job defensively and at least in that limited sense he’s been a success, but he’d obviously benefit from more freedom. Playing with 3 in the middle or even 3 at the… Read more »

Scott, the approval rating survey said ‘check back in a week for results.’ Is this survey new or can we check previous months’ results somewhere?

The ball moved so fast and with purpose between our players, that compared to our Premier League play, I thought I was watching the game on 2x speed.

Yes, and that’s the big problem we have. The win yesterday was the fifth win in the EL but we’re incapable (so far) of replicating anything like that form in the PL. Obviously the standard of opposition in the EL at this stage is not at the same level as we face in the PL but that doesn’t explain or excuse the huge difference. One stat: we had four shots on goal in the last two PL games, producing one goal. Truly appalling. We had eleven on goal in one game yesterday, with four goals. If Arteta can square that… Read more »

If you wish to criticise Arsenal at least get your facts right. We have had 23 shots on goal in the last 2 league matches. 14 against Wolves and 9 against Leeds.

No, we had 14 Shots against Wolves, but only 2 on goal.
9 Shots against Leeds, but again only two on goal.
22 shots, with 11 on target against Vienna.

Biggles had the stats right.

5 – Dribbles completed out of 11 attempts ?? Nope. You people get magic stats somewhere? Different reality? Also B team of Wienna, you wasted your time, they rested players for their weekend game in the league.