THE LOWDOWN
Arsenal take on Willie Kirk’s Everton side at Meadow Park on Sunday for the final match before the festive break. It’s been a week of soul searching for Arsenal and their fans after a 93rd minute defeat away at Manchester City last weekend, another defeat to a title rival away from home. Everton invested heavily over the summer and will represent no pushover at Boreham Wood.

The Toffees have lost two and drawn two of their last four WSL games since losing the FA Cup Final to Manchester City at Wembley. Everton lost Valerie Gauvin to injury in that final and have struggled ever since, however, they did manage a morale boosting 1-0 win over Manchester United in the Conti Cup on Wednesday evening.

In his post-match press conference last Sunday, Montemurro admitted Arsenal needed to win against Everton “or else we will be in not a good situation.” The last gasp loss against City put Gareth Taylor’s side a point behind the Gunners in the final Champions League qualification spot. Montemurro’s side have only won one of their last four in the WSL with defeats to Manchester United and Manchester City and a draw against Chelsea- they need to get back on track with all three points against Everton.

TEAM NEWS
Noelle Maritz will not be fit for this game due to a knee injury and has already returned home to Switzerland to continue her rehab. Viki Schnaderbeck is not yet in full training and also won’t be available. Lia Wälti is back in full training having missed the last two games with concussion and is in line for selection.

Lotte Wubben-Moy also returns from an illness that kept her out of the City game. Montemurro brought Lisa Evans, Steph Catley, Jordan Nobbs and Danielle van de Donk off the bench at City, so there is plenty of scope for him to make changes to his line-up for this one.

LAST TIME OUT
This fixture was not fulfilled last season due to the covid pandemic but the Gunners ran out 3-1 winners in the away fixture last December thanks to a pair from Vivianne Miedema and a Kim Little penalty- with Chloe Kelly scoring a late consolation from the spot. The last time the teams met at Meadow Park, Vivianne Miedema and Louise Quinn goals saw Arsenal to a 2-1 victory over the Toffees in April 2019, a victory that put them within three points of the WSL title.

THE OPPOSITION
Everton invested in their squad heavily during 2020 despite losing forward Chloe Kelly to Manchester City last summer. They brought French international Valerie Gauvin during the summer for a record fee, with the likes of Izzy Christiansen, Claire Emslie, Nicoline Sørensen, Rikke Sevecke and Australia international Hayley Raso all joining during 2020.

Everton won their first four games in the WSL but have struggled since losing a gruelling FA Cup Final against Manchester City, not least because they patched star striker Valerie Gauvin up to play on with an injury, which she made worse in the process. However, in captain Lucy Graham and Izzy Christiansen they have two excellent attacking midfielders.

📈 | "We started the season with a lot of belief, and now we feel we're back on the rise after a small dip."

PLAYER TO WATCH
Given recent results, I imagine Joe Montemurro will look to freshen up his starting line-up and that will probably mean a start for Jordan Nobbs. It remains to be seen whether Montemurro starts her in central midfield or in a wide position where she has played on a few occasions this season. Nobbs’ high energy style has been missed in recent games and is the perfect tonic for a team potentially low on confidence.

Everton will not be easy to break down either and Nobbs adds something a little more bombastic to Arsenal’s attack, not least her unceasing movement and ability to shoot from range. Arsenal will look to push Everton back and not allow the visitors a foothold in the game and there are few better players Montemurro could ask for to execute such an approach. 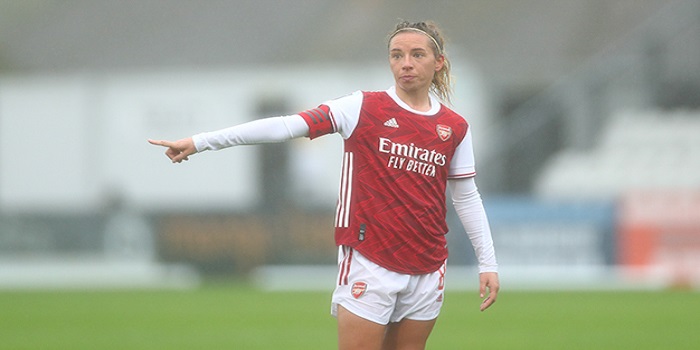 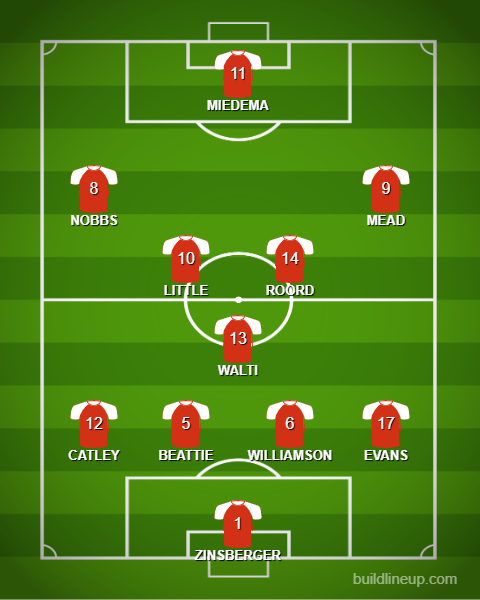 HOW TO CATCH THE GAME
The game takes place behind closed doors at Meadow Park on Sunday at 12.30pm. In the UK, the game will be shown on BBC Red Button and Online. It will be streamed on Atafootball.com in the US, Germany and Italy, Optus in Australia, Sky Mexico in Central America and the Dominican Republic and free of charge on the FA Player app everywhere else.

COMING UP
We will have post-match reaction from Joe Montemurro on the site immediately after the game on Sunday and the usual match analysis featuring graphics from @Miedemastuff on Monday.

Best of luck to the girls and Joe. We need this!