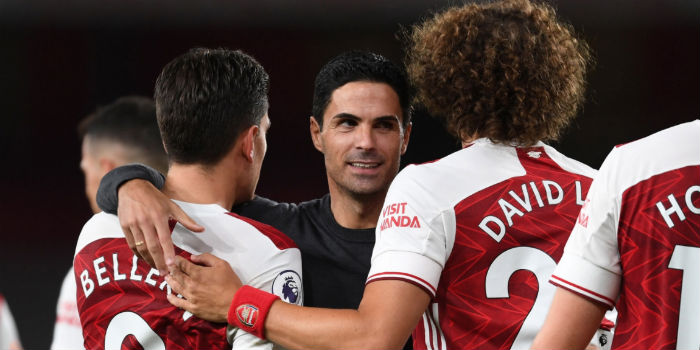 Bernd Leno’s assessment this week that Mikel Arteta is not to blame for Arsenal’s awful Premier League form made for an interesting take from the German.

Speaking ahead of the defeat to Burnley, the 28-year-old didn’t shy away from digging out his teammates for their bad positioning, poor discipline and lack of focus. In his mind, there is no doubt that current failings are firmly the fault of the players.

When the evaluation was put to Mikel Arteta ahead of the trip to Everton, the boss was quick to put himself in the line of fire.

“I take full responsibility because I pick the players that are on the pitch,” he said.

“I have to try to be able to transmit to them the state of mind so that they can control themselves.

“Unfortunately, in football everything goes so quickly and emotions play a big part. I want the players to play with freedom and to take the pressure off them. Honestly, in this moment I believe that’s how you get the best out of them.”

Arteta will be forced to rotate again when we head to Goodison Park with Xhaka and now Gabriel suspended. It looks as though David Luiz, who hasn’t featured since his horrible clash of heads with Wolves striker Raul Jimenez, will return.

While the Brazilian isn’t exactly a poster-boy for discipline and focus, the boss says his experience and leadership qualities will be very welcome during this tough period.

“That’s a key word [leadership],” he said. “In this moment, you want players to take ownership, to be accountable when they go on the pitch and you need leaders to inspire others.

“That gives security to the players. Obviously, David’s experience and what he’s achieved in the game is above everybody else in that dressing room, for sure. His experience can be really helpful.”

It remains to be seen whether Luiz gets the nod or if the likes of Shkodran Mustafi, Calum Chambers or Pablo Mari are given a chance.

He’s got one things going for him, he’s not Mustafi

As Mari has played with the U23’s tonight and Gabriel is suspended, we haven’t got a left footed cb available for tomorrow, which means we will almost certainly play a back 3 with Luiz as middle man and Tierney as left cb. I’d like to see AMN get another chance, maybe on the left side this time, as Bukayo can’t play 90 mins every game. But I fear in the current situation Mikel can’t affort to give him a rest. So if we play Hector and Saka on the wings, I’d like to see AMN get a game in midfield.… Read more »

You dont need to always have a left footed centre back playing. some how this horseshit has seeped into many of your brains. You just need good solid defenders who are organised and know there jobs and work as a unit,

Maybe it’s not absolutely necessary. But if playing out from the back is a template, then it’s easier for the opposition to press our backline if both our CBs are right-footed (or left).

This is why he’s gonna get the sack. He seems to have no clue about the players who are constantly letting the side down or who are past the best.
He will continue to pick the likes of luiz and xhaka.
All talk

To be fair, I wouldn’t pick Mari or Mustafi over him tomorrow either.

Mustafi can have good games but he can also have howlers because his brain overheats in stressful situations and as much as I like the potential of Mari I do wonder if his injury is still impacting him. I thought his defensive performance against Dundalk was not the best. He reads the game but not sure he has the speed to be in the right place at the right time.

I don’t want to be rude but that’s a ridiculous thing to say…do you honesly think he can’t see who’s crap and who isn’t…but you try selecting a team and you will struggle. I regularly try to pick an 11 and almost end up suicidal…we’re not very good or hadn’t you noticed?

Make sure he doesnt do something stupid and gets sent off.
This what the perpetrators do: provoke and you retaliate and rc is given.
The ref shd sent off the former as well.
In certain countries an eye for an eye etc.
Its about time the football authorities update the laws regarding
punishment.
Some football teams deliberately target the dangermen. Foul after
foul and only a yc. Itshd be arc

Any one of those three over luiz.

Perhaps Mari is the one who best deals with traditional tactics of the opposition… set piece crosses, running at defenders, counter attack with width.

Didn’t Luiz come on against Southampton?

yes after Gabriel got sent off

It’ funny how over the last few years, the players who don’t play much quickly becomes favourites with fans. We’ve seen it lately with people begging Arteta to bench Hector for Cedric, and Mari all of a sudden being the answer at CB. Hectors bad form is very much on Arteta. With the RW always keeping the width, HB is asked to take on more central positions, which really doesn’t suit him. He also has no chemistry whatsoever with either Willian or Pepe. It always ends with them getting isolated cause we have no midfielders there to create triangles with… Read more »

Hector is just a very bad defender and I say that as someone that really likes Hector…bless the guy he really should be an attacking midfielder but he can’t defend!

It doesn’t really matter. Any of those choices would yield a similar result. After Gabriel and Tierney the drop-off in the back is severe, ending with Mustafi. The smart money for continuing the red card parade would be Luiz.

I think it’s Ceballos’s turn for the red card today.

A defence without Gabriel looks quite weak, but if Mikel gets the right players in other positions it might be less important.

AMN in a three man midfield to give us some energy please.

The way Arteta has set things up requires good distribution from the back and Luiz is currently the best at this of our long list of centre halfs. So for this reason he is more likely to get the nod. That and he needs to be kept on board in the dressing room.

The red cards are moving backwards, Pepe then Xhaka then Gabriel. Leno next….

Luis needs to have his contract canceled. Along with Willian. Get these clowns out of this club. They can take Edu with them