Dundalk 2-4 Arsenal: By The Visuals

Arsenal overcome a terrible pitch (a cup final and an international Rugby game had taken place on the same pitch last weekend) and a resilient Dundalk side to make it another comfortable Europa League win.

Let’s take a look at the data to see if we can gain any more insight. 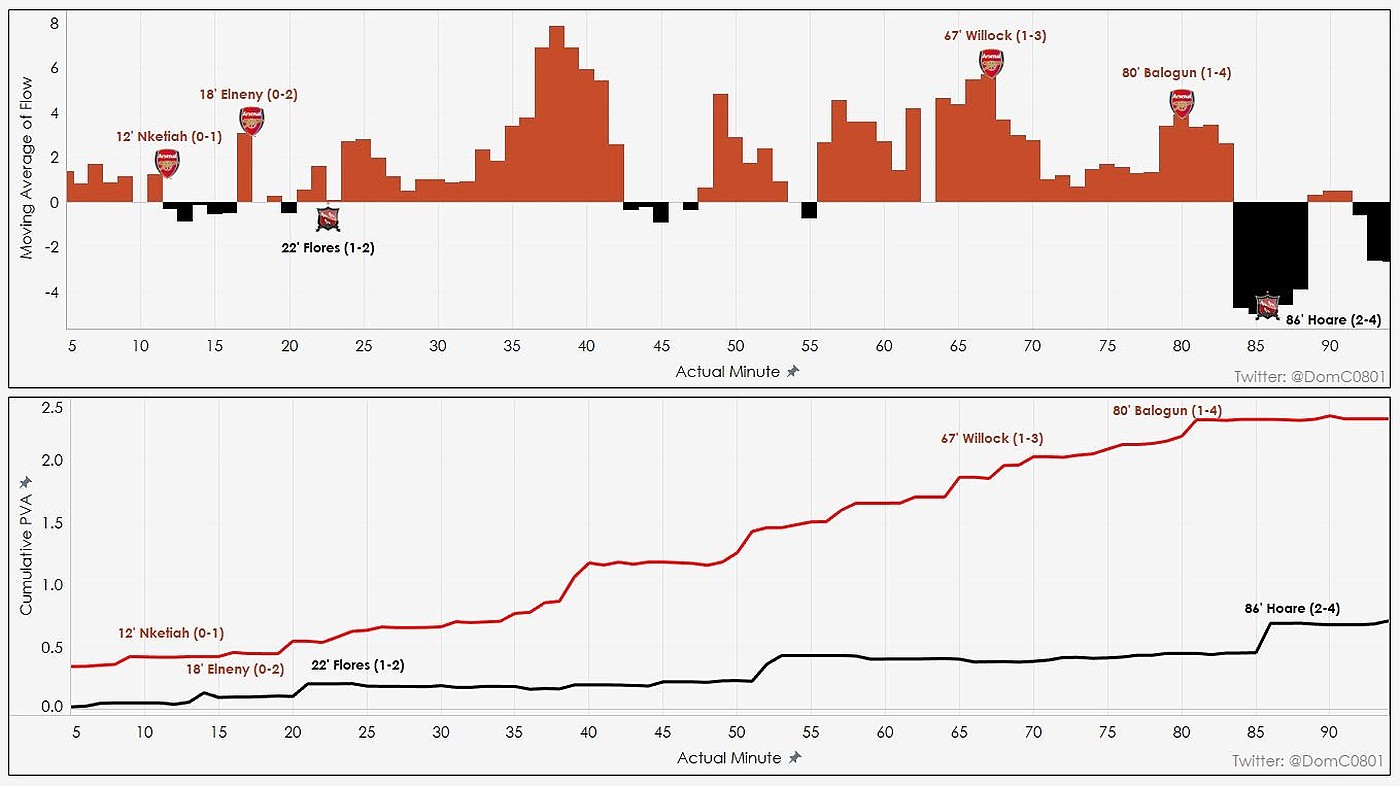 Arsenal dominated most of the game , with Dundalk’s best spell of the game coming after Arsenal had scored their 4th goal. Arsenal started fast but failed to add to their 2-1 lead until the 67th minute, when Folarin Balogun and Joe Willock linked up to put the game to bed. Arsenal’s passing game was no doubt affected by the state of the pitch, but Mikel Arteta would still have expected his side to trouble the Dundalk goal more than they did. 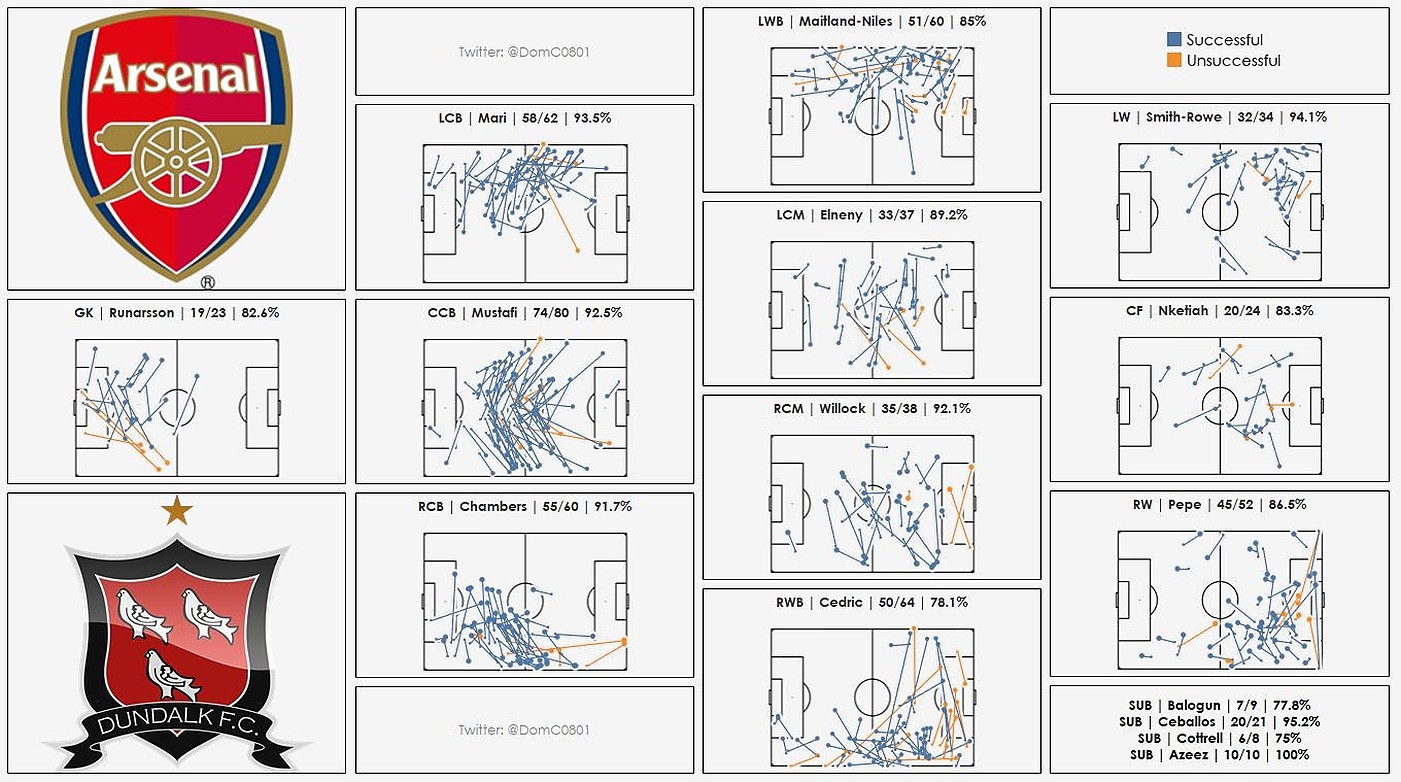 The above pass map shows that Arsenal ended up progressing the ball down the flanks as they managed to get behind Dundalk’s wing-backs with relative ease. Arsenal’s CB’s dominated the ball, but the midfielders struggled to really impact the game massively against a resilient and sturdy deep-block.

Above is Scott’s (read his by the numbers piece here) passing network showing the frequency of passes between players. Arsenal’s shape was good (although Mari and Elneny’s close positioning may have contributed to a bit of our left sided bias. Cedric provided good width on the right and linked up well with Nicolas Pepe. 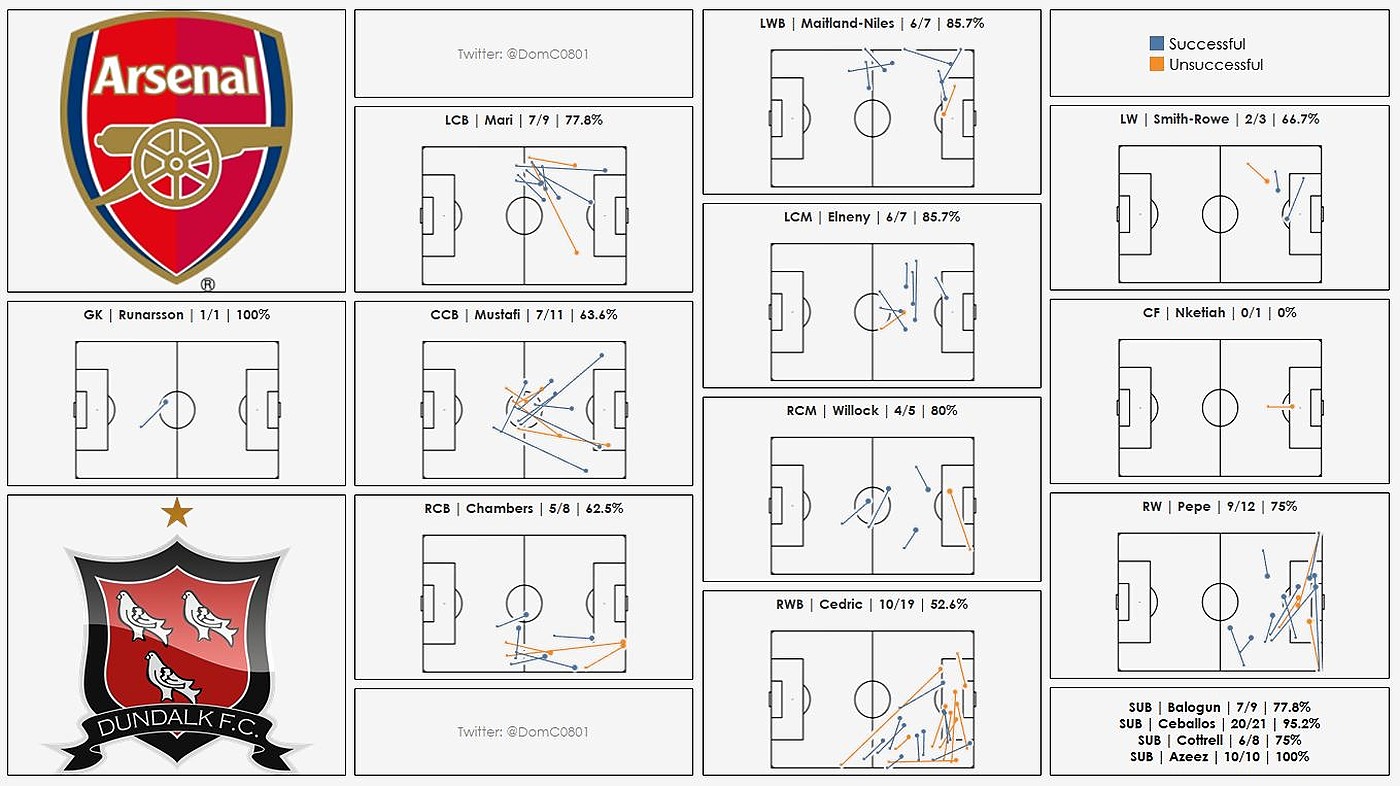 Above are the progessive (ends up at least 10 yards closer to the centre of the opposition goal). As we can see the majority of Arsenal’s progressive passes came down the flanks, with Cedric in particular progressing the ball well down the right-hand side. The centre-backs meanwhile all progressed the ball well, with Pablo Mari in particular stepping out of defence well to progress the ball. 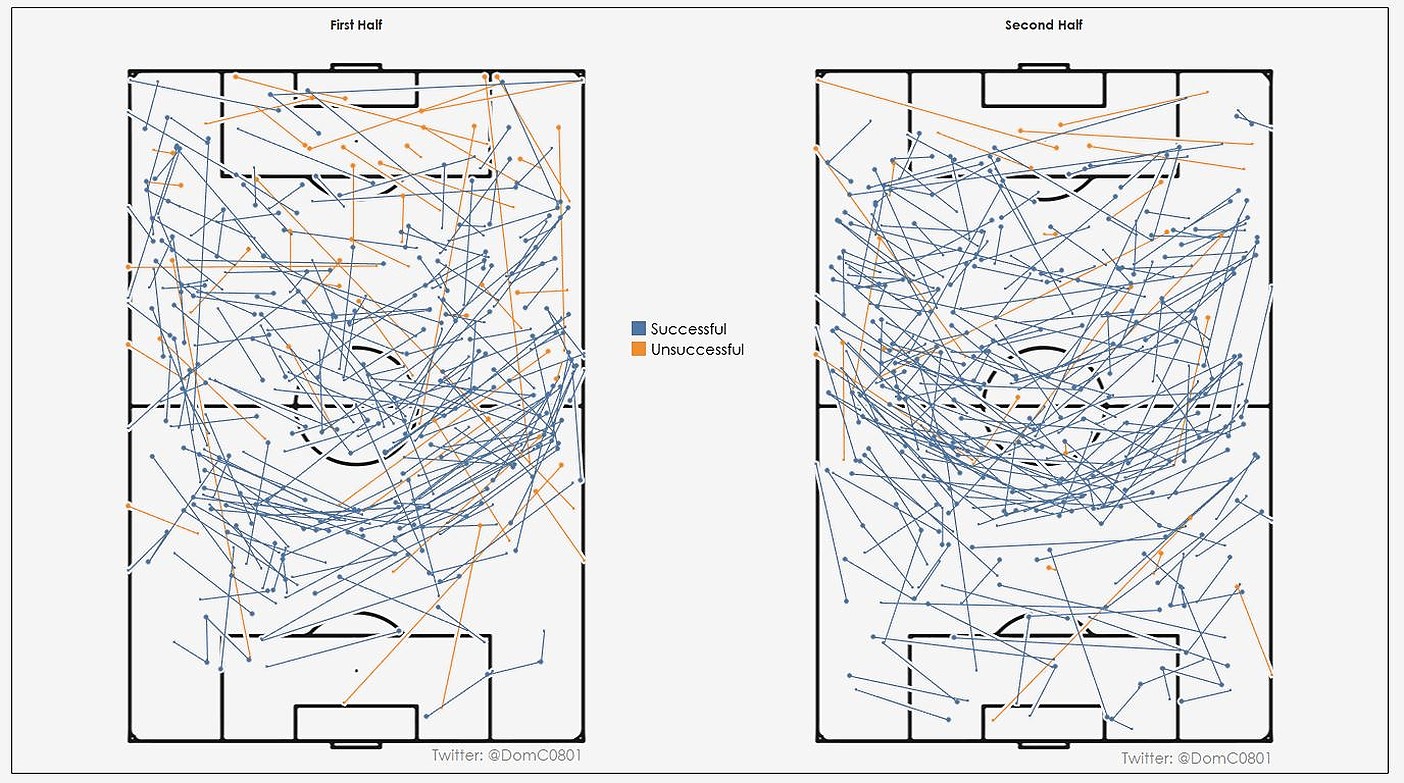 Above are the pass maps from the first and second half. Arsenal ended up with more comfortable possession in the middle 3rd in the second half which allowed them to see out the game. Arsenal again utilised the full width of the pitch in possession as they attempted to probe the defence through Emile Smith-Rowe and Nicolas Pepe. 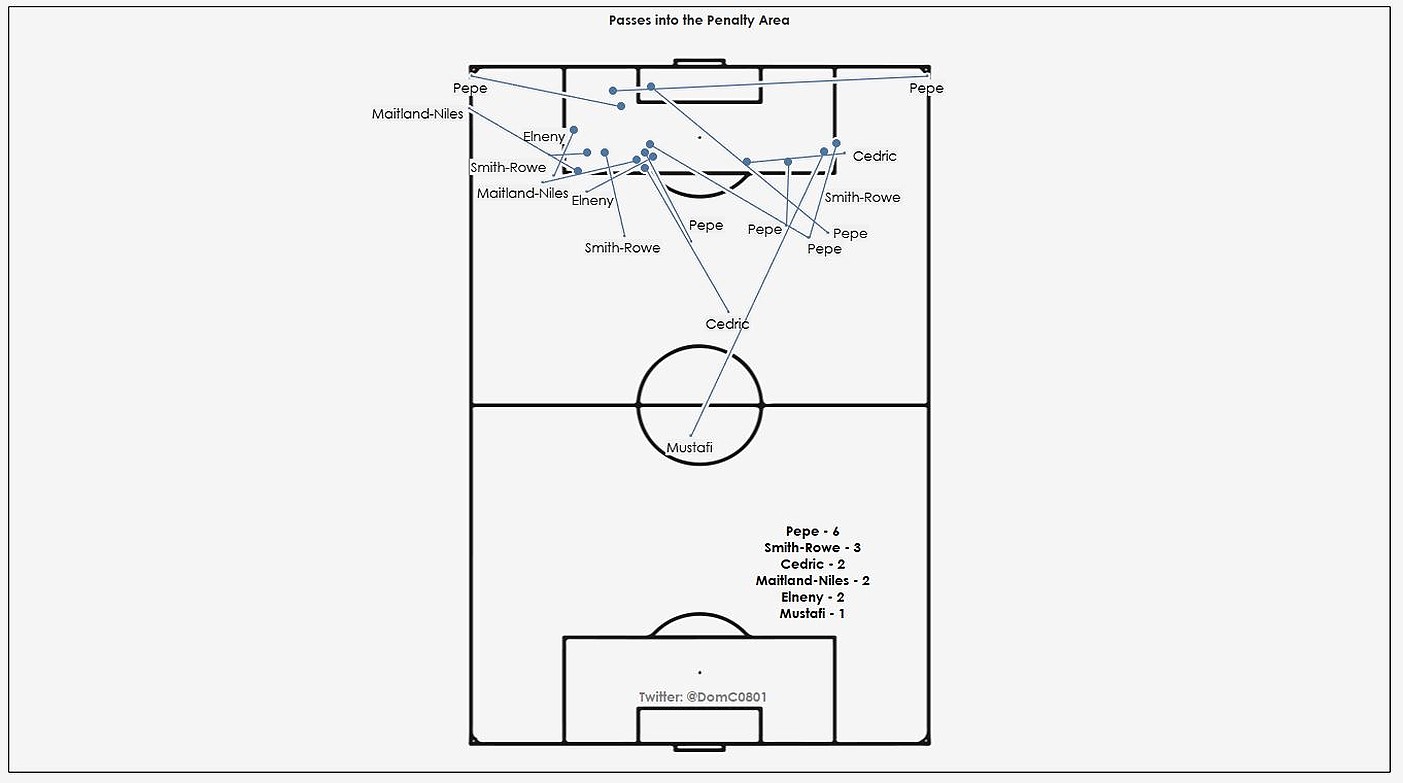 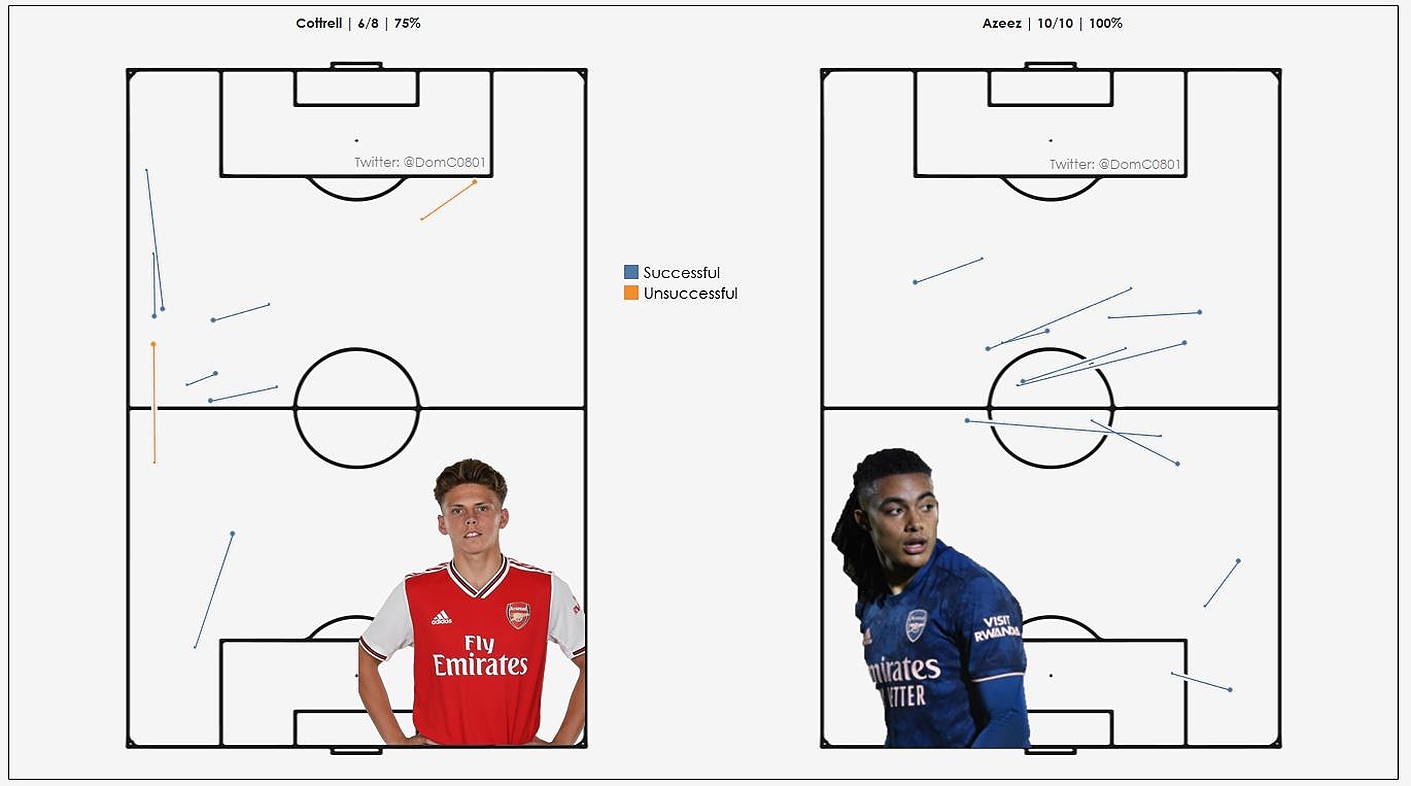 The last thing I’d like to cover are the debutants from last night. Ben Cottrell (19) and Miguel Azeez (18) both showed flashes of their quality and the technical ability we all come to expect from the Hale End academy players. Azeez in particular showed his skill with the below piece of brilliance:

Hopefully these young players can help bolster a squad lacking in creativity and guile.

It’s Burnley on Sunday evening (again), before a midweek game against Ralph Hassenhuttl’s Southampton side.

This all just makes me wonder just why the Sunday team and the Thursday team play so differently. Is it a more free flowing approach by Arteta because the margins of error aren’t as great? Is the Thursday team supposed to perform more like the Sunday team or vice versa? Is Arteta happier for youngsters to express themselves than senior players? Is it just that Premier League teams don’t allow us to play in such a consistently creative manner? Or is the pressure simply mounting up on us and causing us to take fewer risks on a Sunday? And lastly,… Read more »

Premier League teams are better and the matches are far more intense. Dundalk would probably struggle in League 1.

I think it’s pretty simple. We are arsenal. Our brand of football is fast passing, interchanging positions, movement.
Basic for that tocwork is to have a mobile CM. So far only AMN Elneny and Partey hsve those qualities. None are playing. Rxplains it all.

Are you sure those are Arsenal pass maps? I can barely make out the horseshoe!

Amazing what happens when you play the ball into the center of the pitch.