Everton 2-1 Arsenal: By The Visuals

Arsenal continued their tribute to Murphy’s Law (Anything that can go wrong will go wrong), as Mikel Arteta’s men lost 2-1 to Everton at Goodison Park. It marks Arsenal’s 8th loss of the season after only 14 games which more games than we lost in the entire 2015/16, 2014/15, 2013/14 and 2012/13 league campaigns respectively (all 7 losses in 38 games). Arsenal sit 15th in the table and are as close to Sheffield United in 20th as we are to Everton in 4th, despite Sheffield United having failed to win a single game so far this season.

Let’s look at the data to see if we can gain any more insight into another disappointing performance. 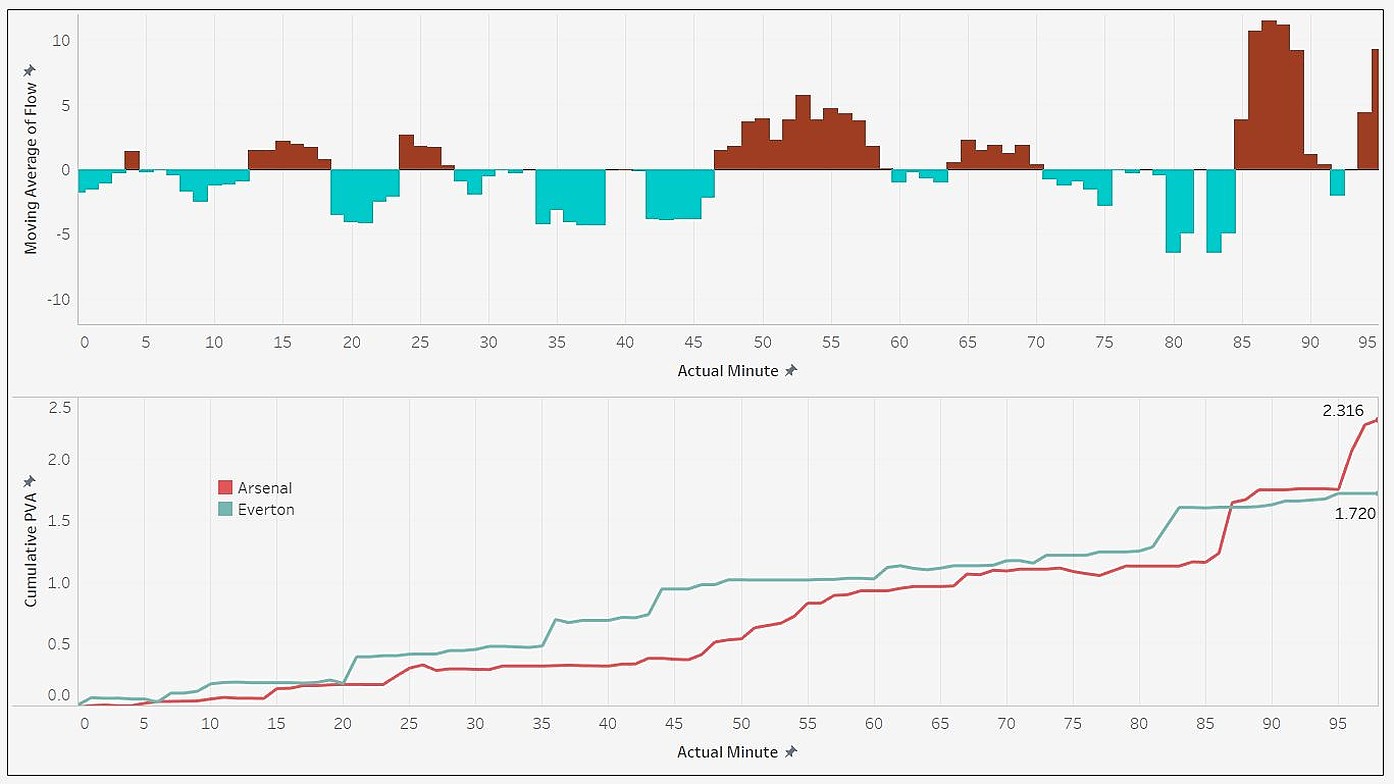 Above is the Cumulative PVA (Possession Value Added) and PV (Possession Value) Gameflow from Saturday’s game at Goodison Park. Arsenal again had the better Possession Value, but the majority of it came after Everton went 2-1 up, and pretty much decided to just allow Arsenal to have the ball, with the Toffees sitting in deep and daring Arsenal to score in a performance reminiscent of how Wolves and Spurs played when winning against Arsenal. Our lack of creativity (outside of the occasional piece of brilliance from Kieran Tierney or Bukayo Saka) means that we are an easy team to defend against with no clear strategy or method of getting the ball into dangerous areas. Teams will continue to sit back and soak up pressure after knicking a lead until we find a solution to our quite frankly woeful attacking play. 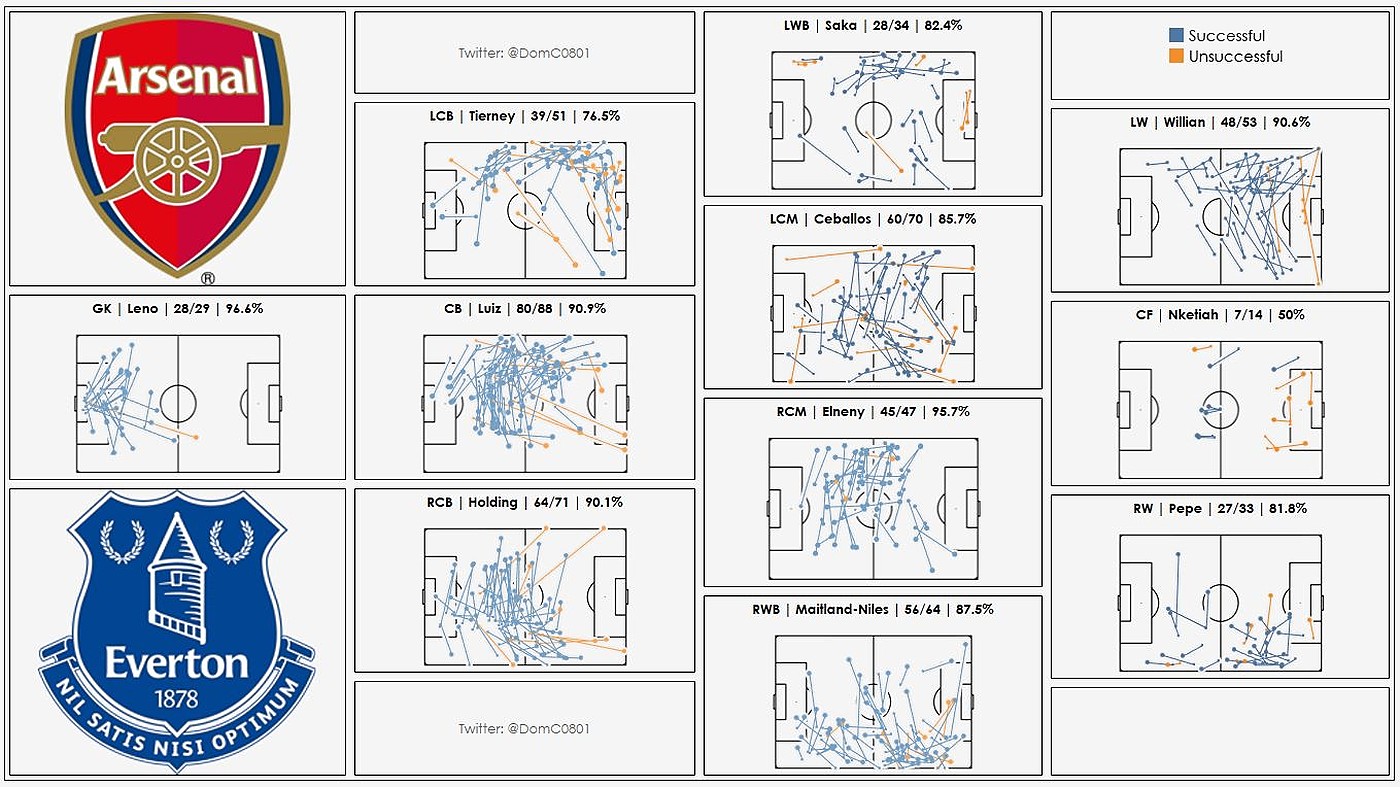 Above are the pass maps from each of the Starting XI from Saturday’s game. I feel like there’s not much else to say other than it’s clear to see why we lack creativity when 2 of our front 3 barely touch the ball in dangerous positions and our midfield seem willing to just pass the ball from side-to-side with no attempt to create danger. 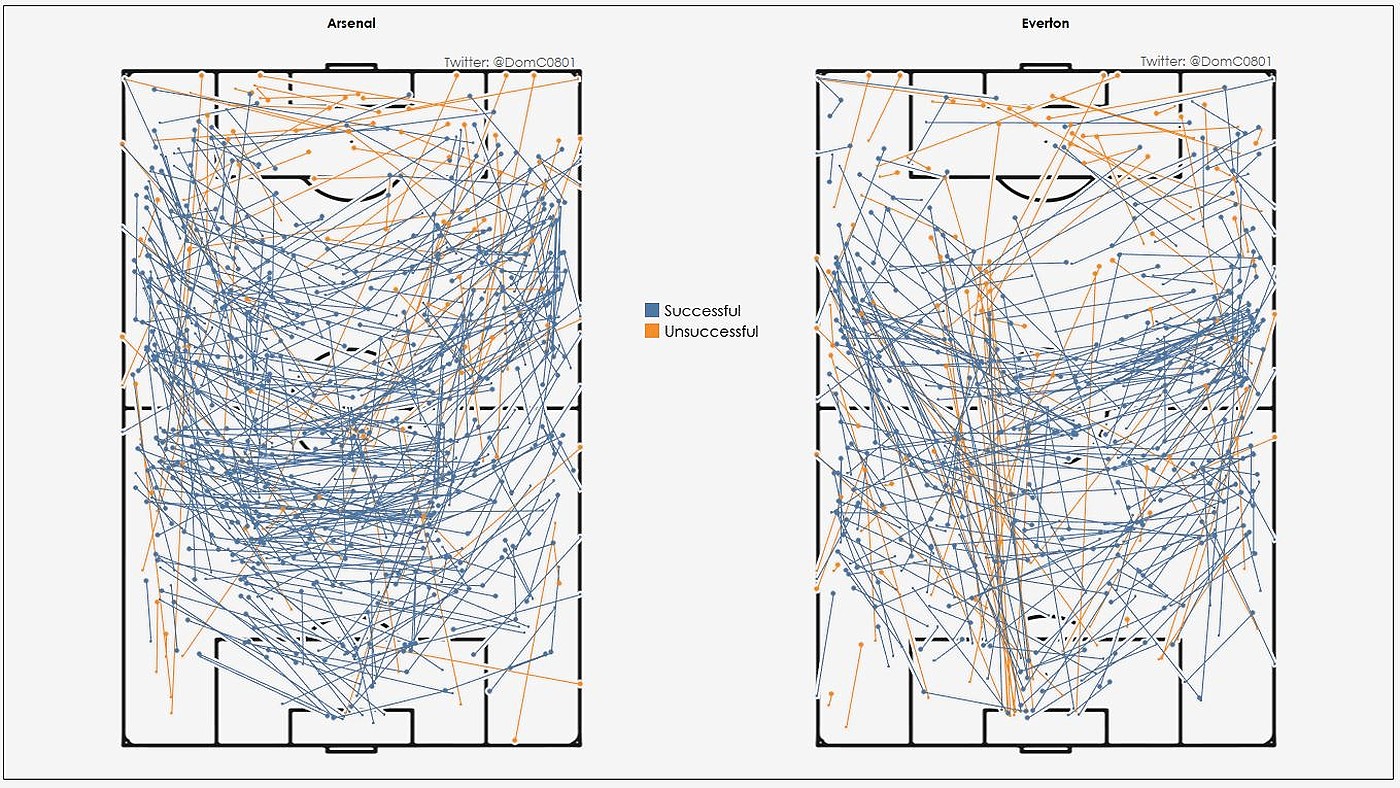 The pass map looks a little better, but it’s shocking how we can play a team who have such a bad pass map, and yet not many people would argue we deserved a better result than we got. Arsenal’s passing again lacked any central threat, with the dreaded U-Shape forming in the final 3rd as we struggled to put the Everton defence under any duress. 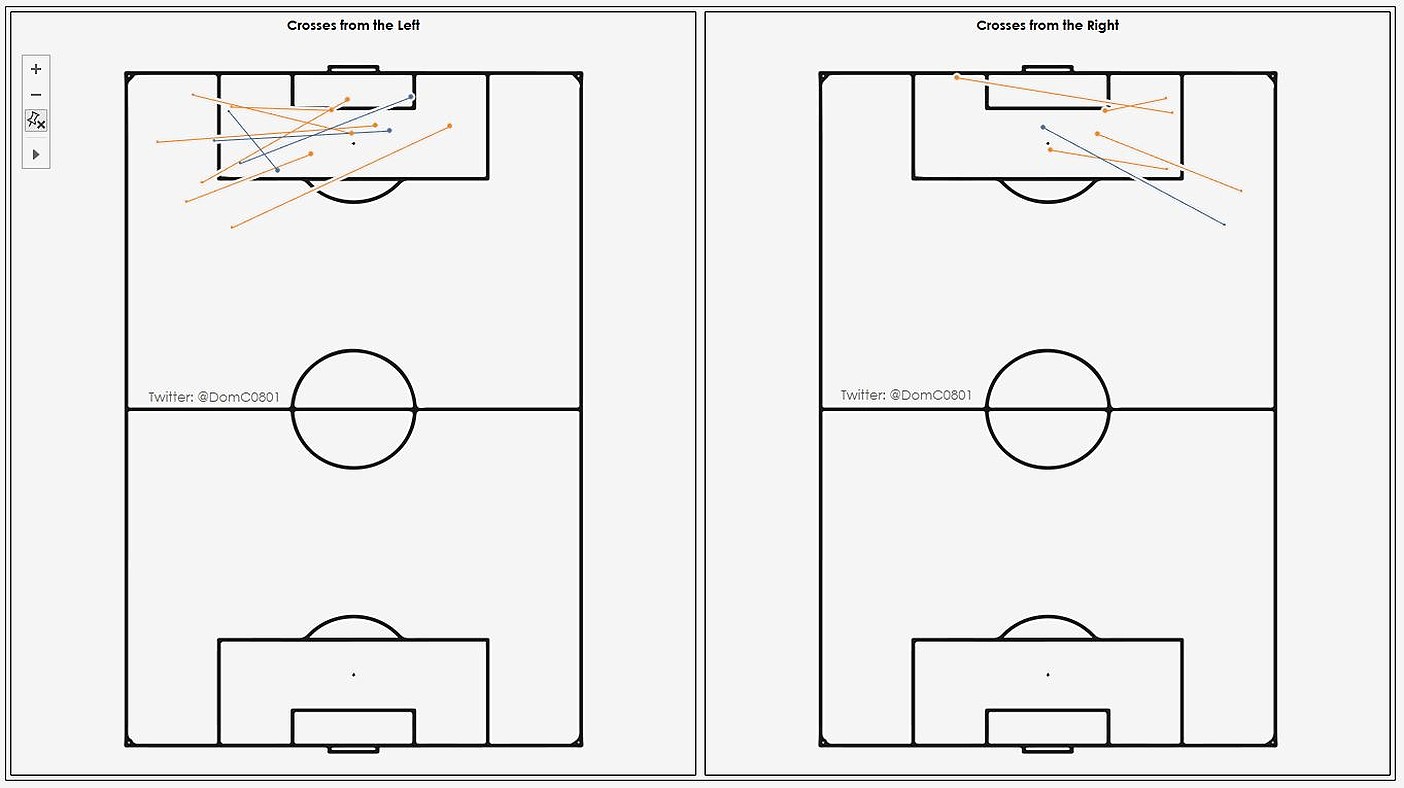 The above show our crossing by side and passes into the penalty area by half. We seem to have gone back on our devotion to crossing as we attempted a lot less hit and hope crosses, seemingly having learned from the last 100 unsuccessful crossing attempts. The second visual really shows how terrible we were in the first half, with only 1 completed pass into the penalty area. The second half was far more promising however it again shows that we are most effective at getting the ball into the box when we aren’t launching 20 crosses into the box each half.

That’s all from me today. It’s a midweek game against Manchester City in the Carabao Cup before a big game against Chelsea at the Emirates. With Mikel Arteta’s finest moment as Arsenal manager coming against the Blues he’ll be hoping a win next season could prove to kickstart Arsenal’s so far relegation-threatened season.

Previous articleJoe Montemurro reacts to 4-0 win over Everton
Next articleArteta: I want to see fighters, not victims

Play Luis in cm alongside Willock.

I like Luiz along side AMN but I get your point. It’s damning that one of our back up, aging centre backs is among our best creative outlets.

Well personally I’m sick of seeing these academy youngsters doing well. I hope we can recruit more ageing hand-me-downs on long term contracts from our opponents so we can continue our path towards championship glory.

Edu and the rest, make it happen!

Spot on, mate! I mean if u have money, why won’t u spend it? Put the money on the table for key players like xhaka and extend with luiz, mustafi & sokratis. Give Ceballos a 5 yr contract on 400k a week. Make Runarsson first choice. Get Giroud back for 50mil in january and ramsey for 100. We can still turn this around! Covid made it really hard for essential workers, like player agents and we as a club have to protect our values and serve those in need. Rashford with his free school meals for underprivliged…pfff…Kia have a family… Read more »

Damning, but getting Giroud and Ramsey back would improve us.

Well I’m thinking big here. Why not Troy Cojones Deeney? A proven relegation striker on the side of thirty we prefer. Perfect for what were aiming for.

Don’t worry. Xhaka will be back next game to slow us down further.

Obviously wasn’t including him in the 3….

How about being relegated in the COVID-19 year, with a young coach in his first job and players let him down isn’t that bad after all?

still waiting for Arteta to get sacked al9ngside Edu!

We have no threat in the central areas… When martinelli came on we began to cause some issues because he was actually moving into the channels unlike any other player at the club at the moment. When Laca was there he was far too slow to create any real threat

We play the worst football in the division.Leeds lost 6-2 to manure but still created more chances in 1 game than we do in 6.

More of the same isn’t it? No urgency at all from the team in the first half, save for one or two players showing a flash of quality here or there. Eddie was absolute rubbish, wasted two golden chances. Second half better but Willock and Eddie just not good enough for AFC! Willian couldn’t give less of a shit from what I could see. A few perfunctory dashes here and there, but otherwise, zero end product or quality runs. Total lack of confidence from the players. No sauce or quality except a few individuals. Coach is making no difference. Relegation… Read more »

Amateurs over their heads top to bottom on the management side. Truly will be interesting to see if KSE wake up to the relegation risk. In American sports, you can be an absolutely crap owner, but your club can never be relegated and you share in the rather socialist(!) earnings of the league. As Stan said years ago, trying to win championships in his view was a fool’s errand and way to drive yourself mad. He’s in it for the annuity and for the asset appreciation. Relegation would be a brutal (but earned!) blow to both the annuity (it would… Read more »

It’s much too premature to say that we are “well and truly in a relegation fight”.

Understanding Arteta Arsenal managers are a peculiar breed. Wenger was the gung ho, you score and I score, champion, Emery was afraid of his own shadow, now Arteta. What is Arteta’s philosophy. Last year, he created a passive team, that exclusively sat in its own half, saying 8 men in the 16 yard area, is good enough to draw the game. Try for an out ball to Auba, he scores, he win, else take the draw. In cup games, as opposition tried to win the game, this strategy worked, and we won the FA cup. And in our happiness, we… Read more »

Just because I don’t know where else to say it, I wanted to write something in relation to the blog post of today. I wanted to say that the assertion that the Carabao Cup is not important is not strictly true, especially from Arteta’s point of view. The Europa League places actually go to the Carabao Cup and FA Cup winners unless they are already in the top 6. That’s why we got into the Europa League last season even though we finished 8th. (I’ve no idea how Europa League 2 affects this in the future, so it could be… Read more »

My hopes are that if they are sticking with Arteta they will back him in the Jan transfer window. Its clear he doesn’t know how to make it work with this squad so let him bring in what he wants. If there is no investment then its hard to see how things will improve and Arteta will have to go. I really want it to work for him but time is running out too.

Agreed. Board did the same thing with Emery, he wanted a tall, tackler in midfield and got a terrier who he didn’t rate much in that role. He wanted premier league proven winger got a high potential import.
If same happens then it would be difficult to see any improvement anytime soon

I remember the fans being so critical of Wenger when his teams tried to pass the ball in the U. But we forgot that he was forced to sell two players every year to give the banks 40million. That meant either we didn’t get our players last a little longer in the team (Fabregas, Nasri) or we were forced to rely on players who were always injured (Wilshere, Rosciky, Cazorla etc). We played our best football with central ball carriers like Cazorla, Wilshere, Rosciky, Ramsey fit and the weakness was lack of DM to clear the danger. But these guys… Read more »