Arsenal 0-0 Manchester United: By The Visuals

Arsenal maintained their unbeaten run post-Christmas as they drew 0-0 with high-flying Manchester United in a tight game at the Emirates Stadium. It was a game in which both sides had chances to win, but a draw was probably the fair result. It also means that Arsenal have only conceded 2 goals in the league since Christmas, with both being in 3-1 wins (Abraham and Armstrong). Arsenal were without 3 key players in Kieran Tierney, Bukayo Saka and Pierre-Emerick Aubameyang, so Mikel Arteta will undoubtedly be happy to see his side still able to compete with some of the best teams in the league even when missing such key parts of the team.

Let’s delve into the data to see if we can gain any insights into Saturday’s game. 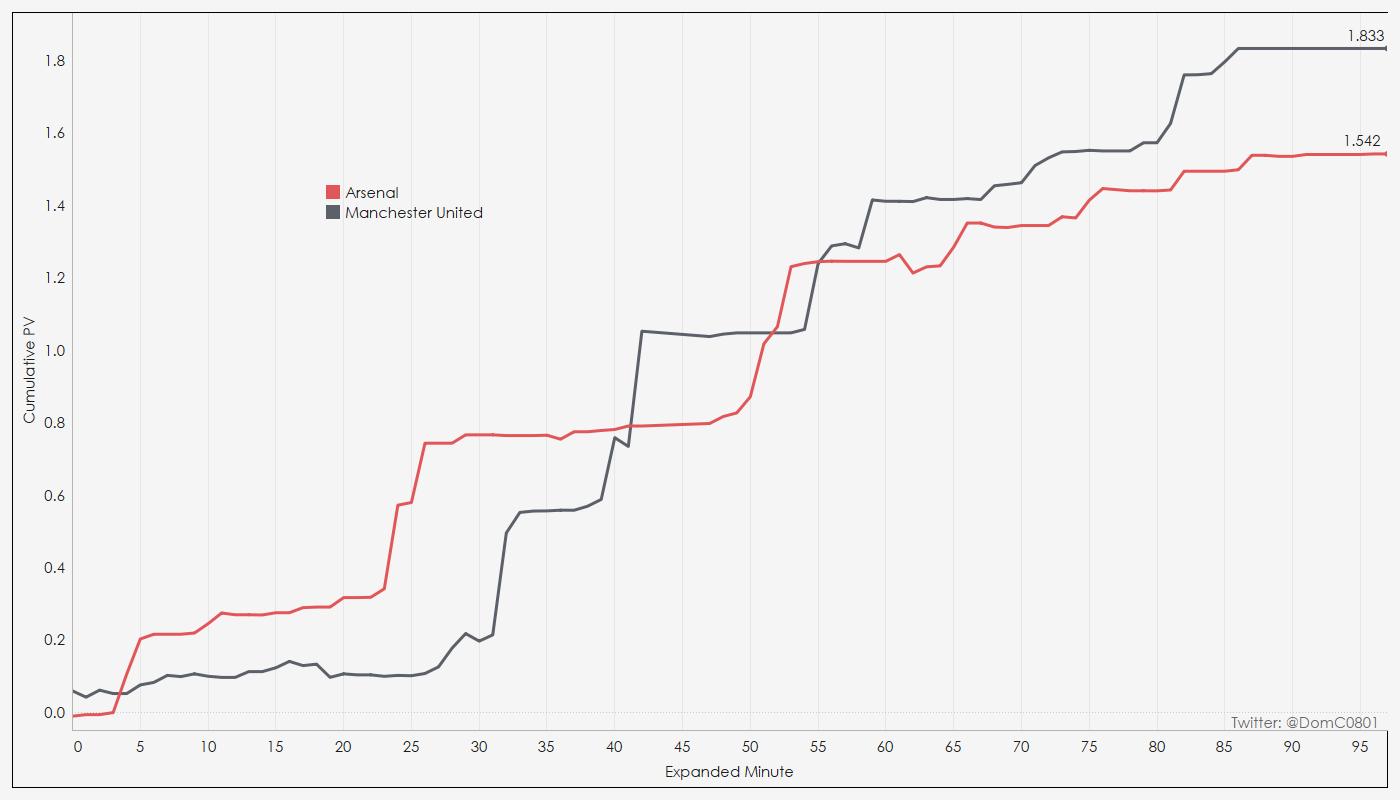 The above shows the Cumulative Possession Value Added (PVA) by each side from yesterdays game. Arsenal had the better first half with Manchester United probably creating the 2 best chances of the game in the second half (both falling to Edinson Cavani). In the end a 1-1 draw would likely have the been the fair result, with Manchester United probably the better of the two sides in terms of chances created. What might be slightly worrying for Arsenal is the fact that after the 55th minute, they didn’t really trouble Manchester United too much, with fatigue seemingly limiting our ability to press up the pitch. 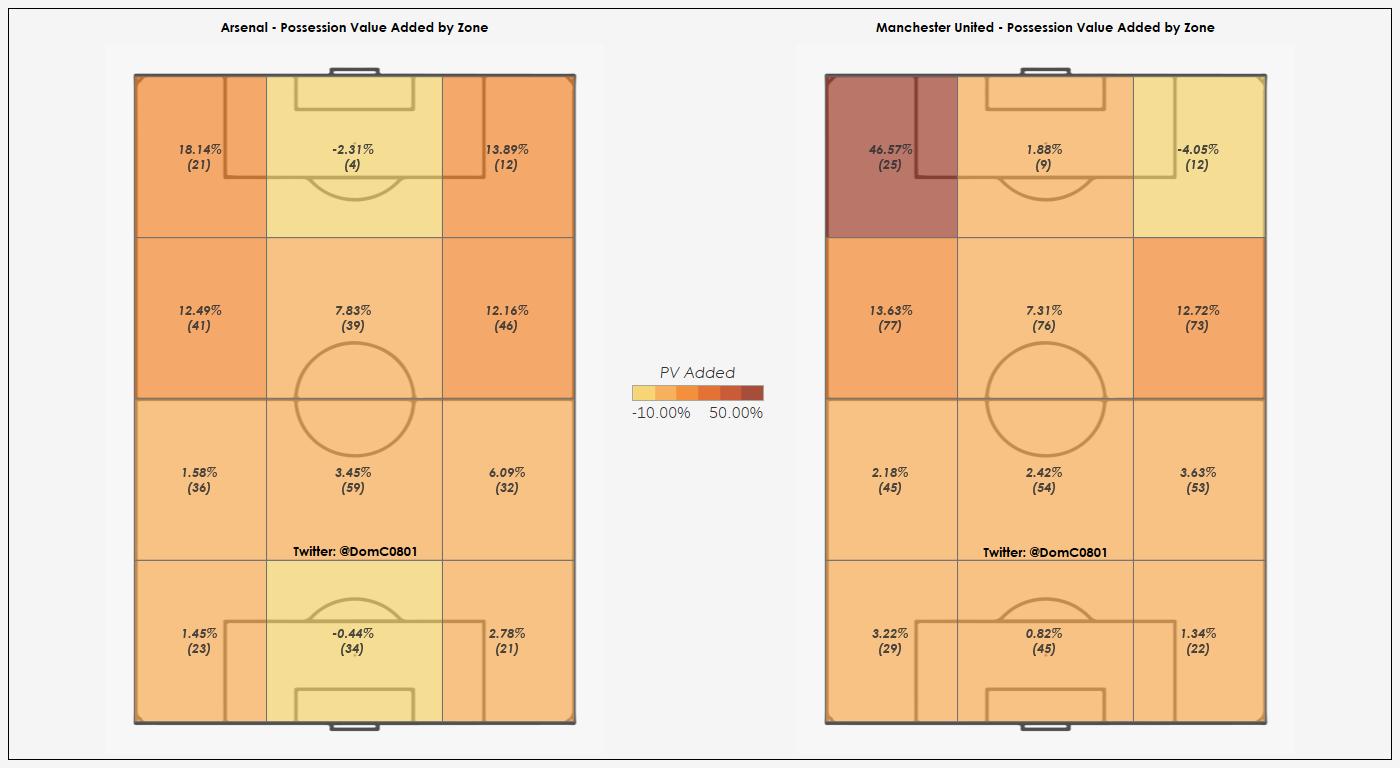 The above shows the PVA each side generated by each zone of the pitch. Arsenal’s PVA was very evenly distributed, with chances coming from both flanks equally as Arsenal’s balance in attack continued. Manchester United produced the majority of their PVA down the left-side in the final 3rd which is a feature of their attacking play as Rashford and Luke Shaw link-up. 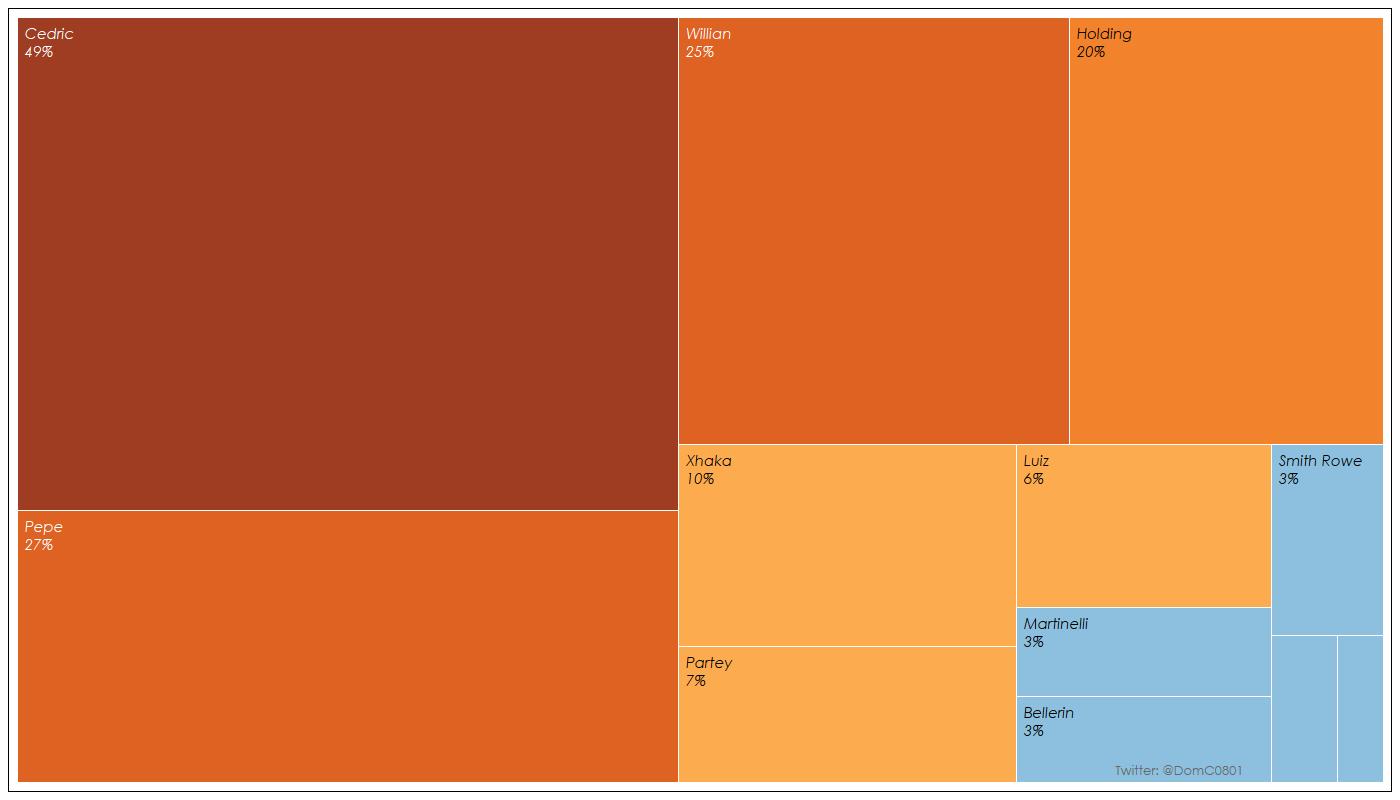 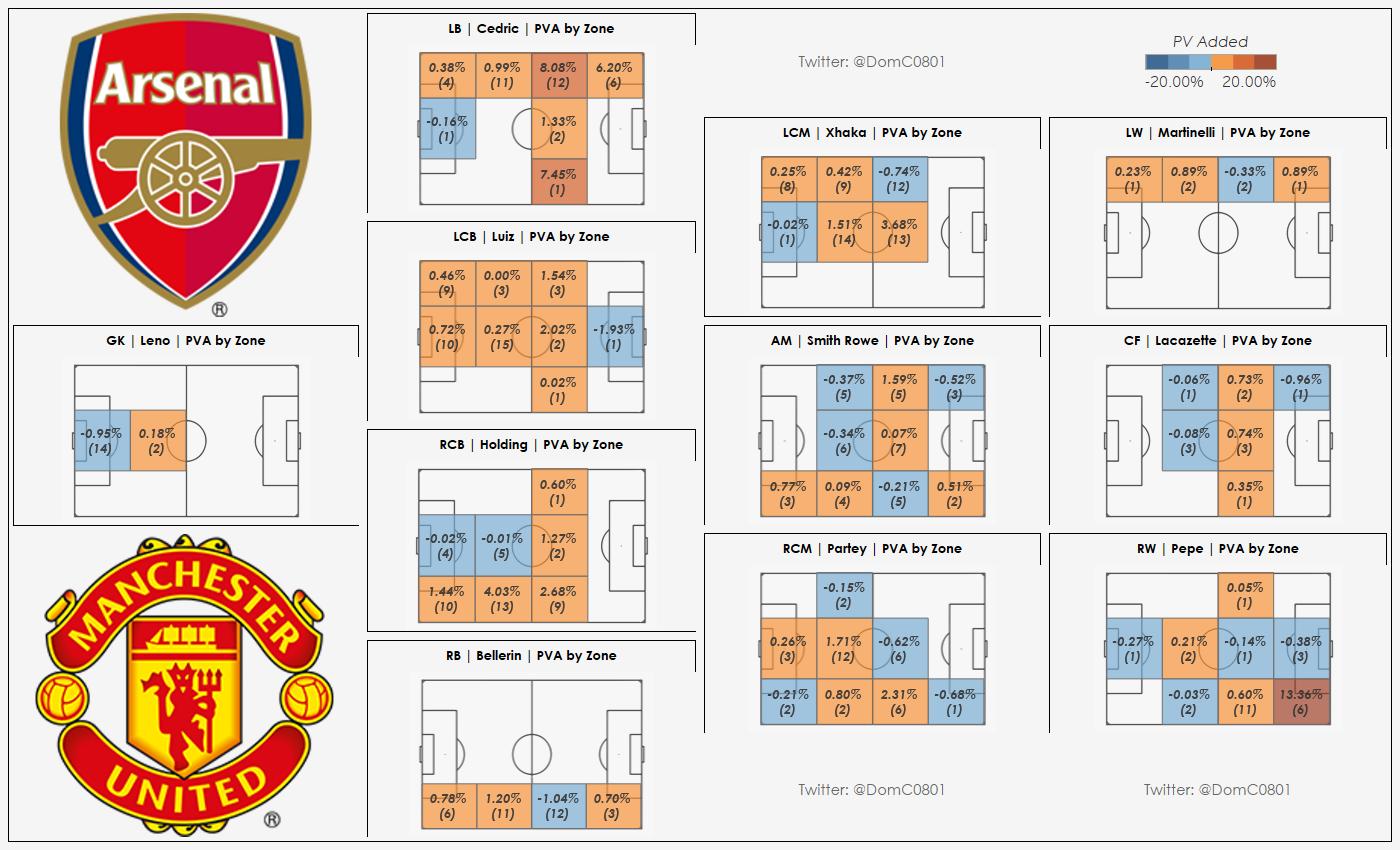 Above are the PVA by player tree map and a PVA Zone map for each player (again excuse the weird box issue). Nicolas Pepe and Cedric Soares generated the most PVA for Arsenal with Willian also proving a dangerous option off the bench (in what was probably his best performance). Interestingly, Emile Smith Rowe nearly covered the entire pitch from the Number 10 role as he looked to link play around the pitch. 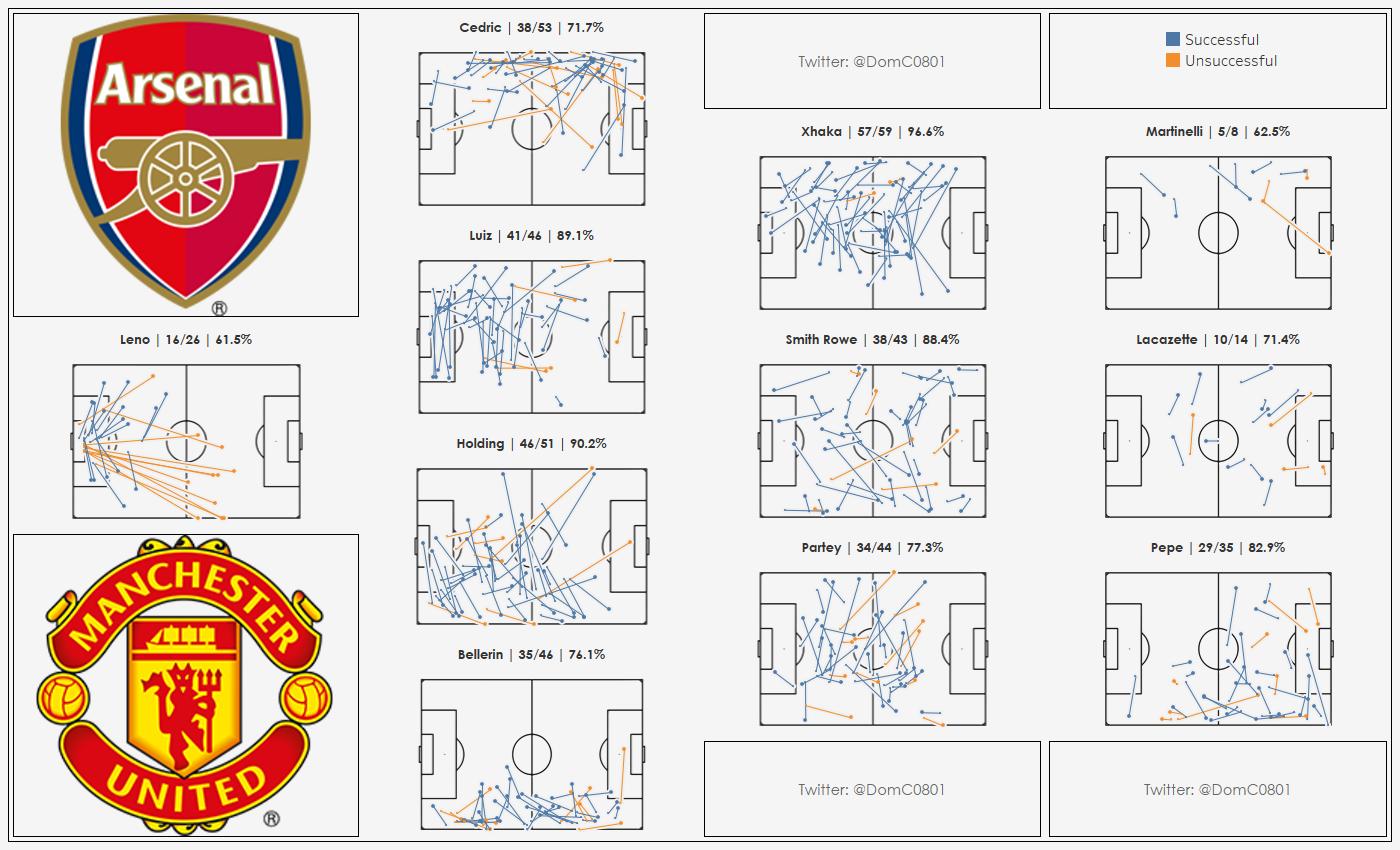 Lastly, above shows the pass map for each of the Starting XI. Thomas Partey had an uncharacteristically sloppy game in possession, but the Ghanaian still managed to break through the United press at relative ease, giving Arsenal a great option when under the cosh. Gabriel Martinelli struggled to get into the game (although he almost had a brilliant assist for Alex Lacazette), which ultimately led to him being subbed off for Willian a half-time.

Up next it’s Wolves in the midweek before Arsenal travel to Birmingham looking to avenge their 3-0 loss against Aston Villa in November.

Previous article“It hurt me, it affected me” – Saliba opens up on lack of opportunities at Arsenal
Next articleLeno: We’ll have fun with Odegaard

Tierney, Saka and Auba would have made a big difference, feel sure we would have won if they played.

it’d be nice to explain what pva is at the end of the article, despite it probably having been explained before

Yeah I enjoyed that too lol quite a few were going on about teams around us having games in hand, including spuds, but just because you have them in hand doesn’t mean you are going to win them!!! We are now only 8 points off 4th spot and 4 points off 5th – there is a lot to play for 👍

Don’t get me wrong, I hate Brighton for what they did to us last season. Not least that thundercunt Maupay who banjaxed Leno intentionally but between them and Spuds there’s no doubt who I prefer to win.

Mourinho’s face at the end was a peach. Please keep going just like that! One more loss for them and a win for us and we overtake them.

I believe Martinez has a different opinion on Brighton. They are basically the team that gave him the opportunity to show what he’s actually made of.

The data supports Arteta’s decision to replace Martinelli with Willian: “Nicolas Pepe and Cedric Soares generated the most PVA for Arsenal with Willian also proving a dangerous option off the bench (in what was probably his best performance). . . Gabriel Martinelli struggled to get into the game (although he almost had a brilliant assist for Alex Lacazette), which ultimately led to him being subbed off for Willian a half-time.”

Wow…PVA for Cedric…that’s the big takeaway from t he date for me. I have to say it confirms the internal vibe I got from watching this match and his excellent match against Southampton.

I’m going to immediately retract previous criticism of him and Kia. This guy will absolutely turn out to be a valuable signing if average performances settle in and around this level.

Long may it continue…

Xhaka 96% pass success that is tidy!

Xhaka had an excellent match. Another one that has been subject to a lot of criticism but is playing quite well of late.

And regarding my retraction above, let’s apply to Cedric only. Still think Kia’s using us for a mark. Even if Cedric and Luis turn out to be positives, I can’t imagine them ever outweighing the grift he perpetrated on us in the form of Willian.

Cedric, keep up the great work. Kia, feel free to find another club to bleed dry.

Can someone teach our players how to score from free kick? We had at least 5 scorable free kicks and 5 different players kicked it and only Laca’s seems right.

Drives me mad, not that we don’t score them all but everyone having a go. Surely you have a designated fk taker and he takes them all. Even Beckham would need a couple a game to find his range

I think Cedric might be pushing bellerin out when Tierney is back. Pepes best games have also been when not playing with bellerin, (end of last season with Amn and now with Cedric).