Arsenal 3-0 Newcastle: By The Visuals

Arsenal made it into the top half of the Premier League table for the first time in what feels like forever, as Mikel Arteta’s side put a poor Newcastle side to the sword running out 3-0 winners against Steve Bruce’s side. It was a very comfortable game for Arsenal, with Newcastle offering very little in the way of resistance as they made the game a lot more open as the under-fire Bruce set his side up to ‘have a go’ but was unsuccessful to say the least. The win makes it 5 wins from the 6 games we have played since Christmas day and the outlook around the Emirates Stadium looks a lot more positive as a result.

Let’s delve into the data to see if we can gain any more insight into Monday’s game. 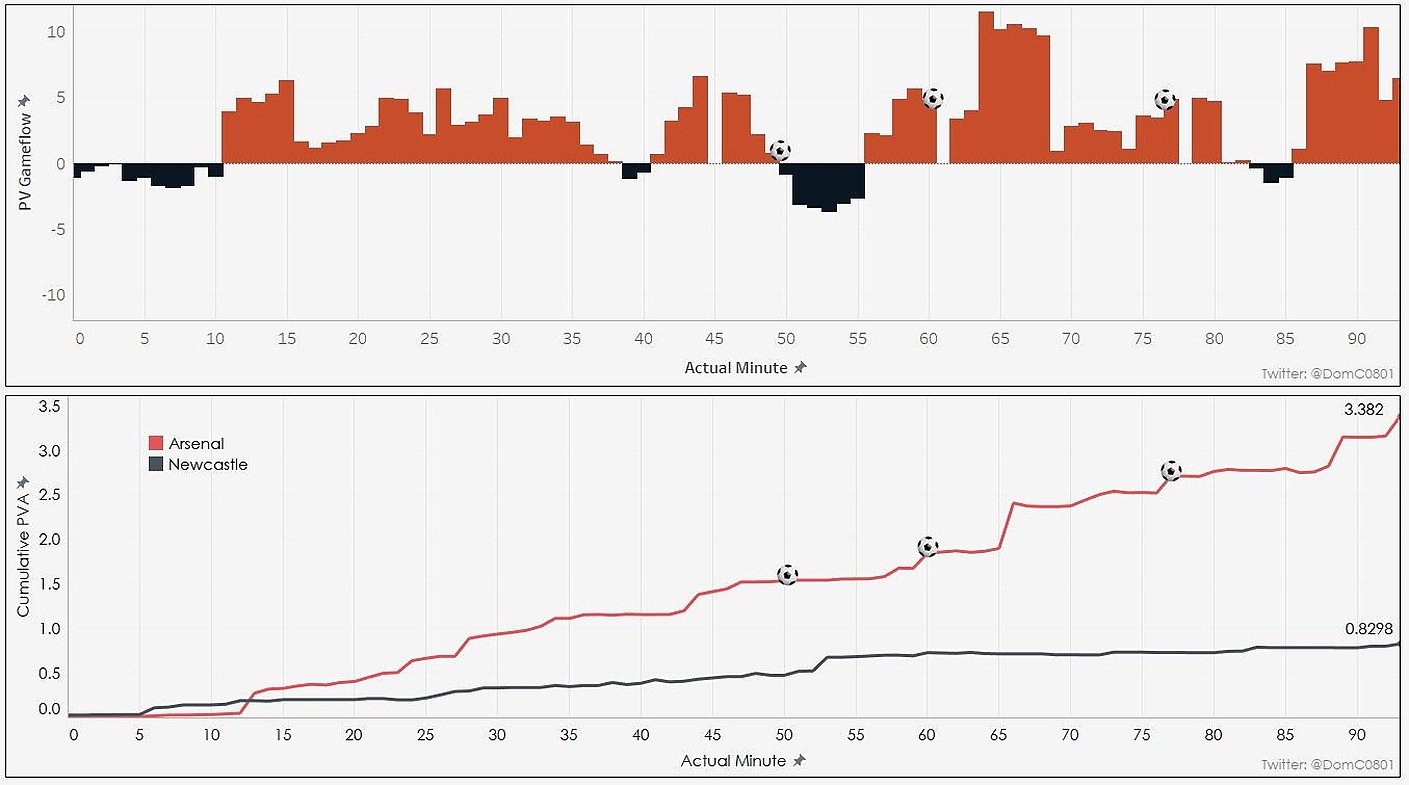 Above is the Possession Value Gameflow and the Cumulative Possession Value (PV) for both sides. Arsenal dominated proceedings with the Magpies unable to cause much threat. Their low PV is replicated in their Expected Goals tally, with Scott’s model giving them 0.19 xG. It is also very encouraging that even after failing to score in what was a dominant first-half display, Arsenal found another gear to move into and put the game to bed in the first 15 minutes of the second half. If Arsenal can continue to replicate this kind of dominance it will leave us in very good stead as the season continues. 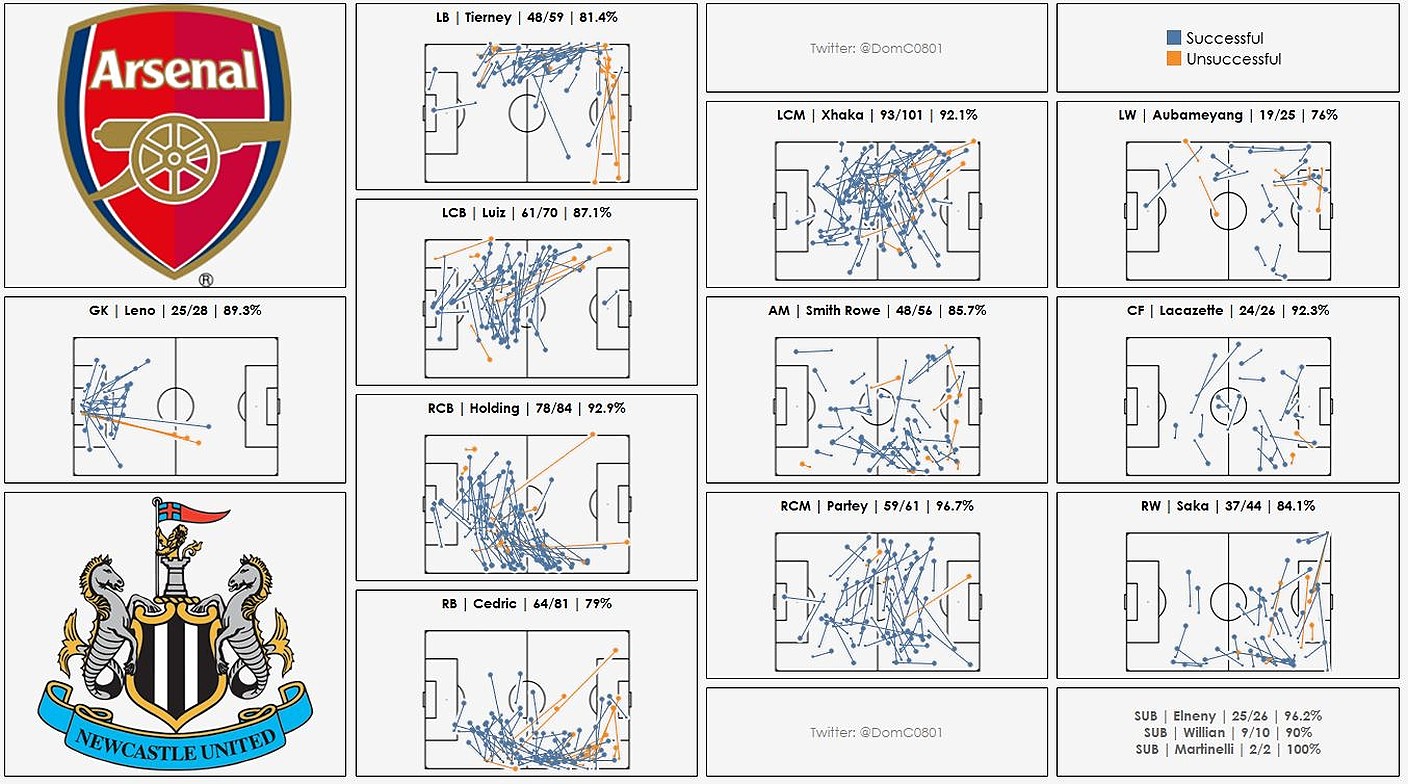 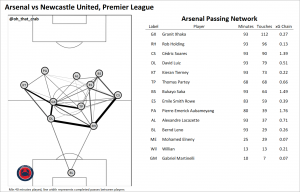 Above are the pass maps for each of the starting XI as well as Scott’s Passing Network from his By The Numbers piece. Arsenal were completely in control, but what was most promising about the game to me was the balance with which we can sustain attacks now. Previously Arsenal could be accused of being one-dimensional, with the left-hand side being the primary source of threat, but since the introduction of Emile Smith Rowe and the decision to play Bukayo Saka from the right, this has changed. Arsenal now sustain attacks down both wings and the midfield pivot of Xhaka and Partey is perfect for this as they are both capable of recycling possession out wide quickly and safely as evidenced by their pass maps. Lacazette acts as a good foil in the middle, with his movement to drop deep and link play pinning centre backs and creating space in behind for the runs of Aubameyang, Smith Rowe and Saka. Overall this was a very encouraging display, albeit against abject opposition. 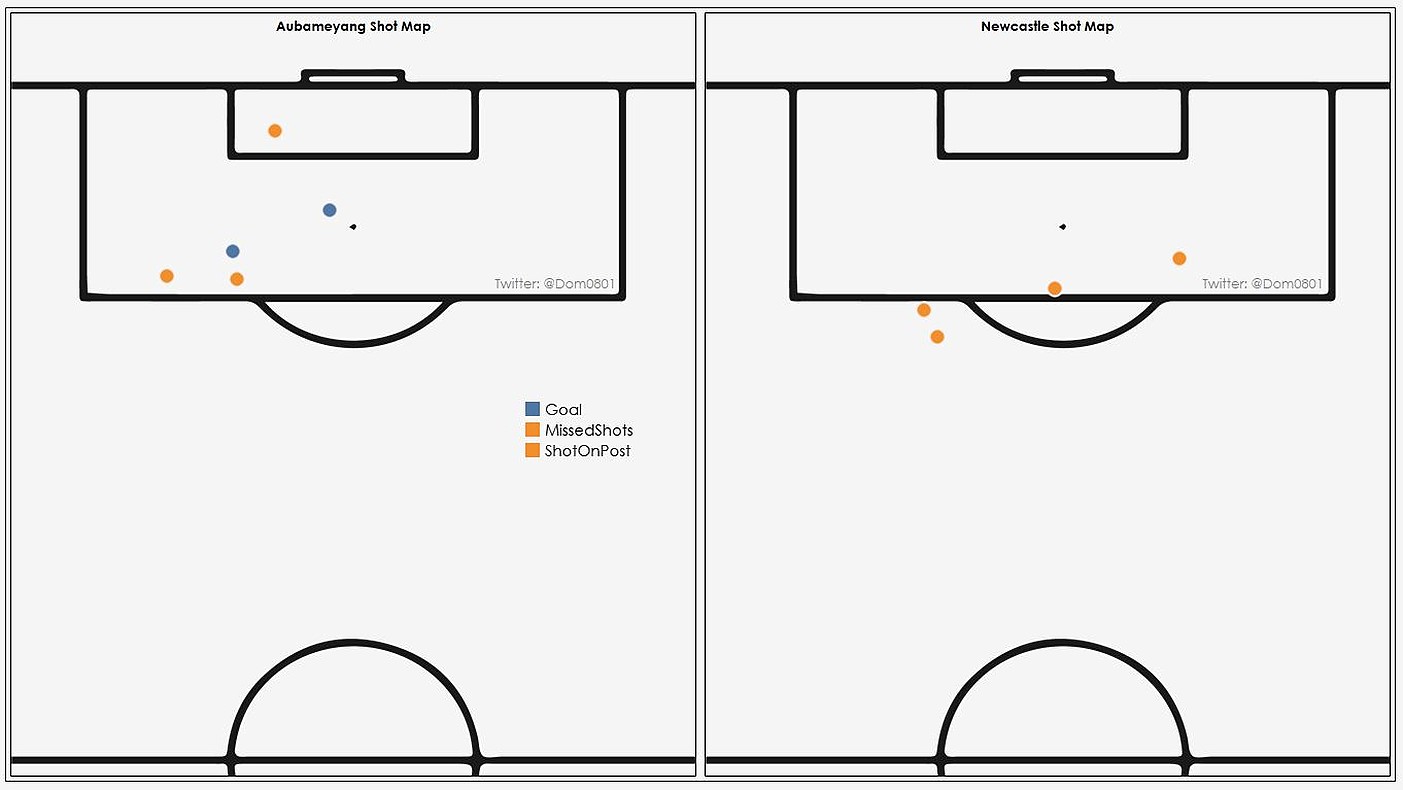 To hammer home how poor Newcastle were, the above shows Pierre-Emerick Aubameyang’s shots from Monday nights game side-by-side with Newcastle’s shots from the game. Newcastle just could not create anything of note and were reduced to shooting from around the edge of the area. Credit must go to the Arsenal defence, as they kept their 5th clean sheet in a row and 7th Premier League clean sheet of the season, but they will face much sterner tasks in the next few weeks. 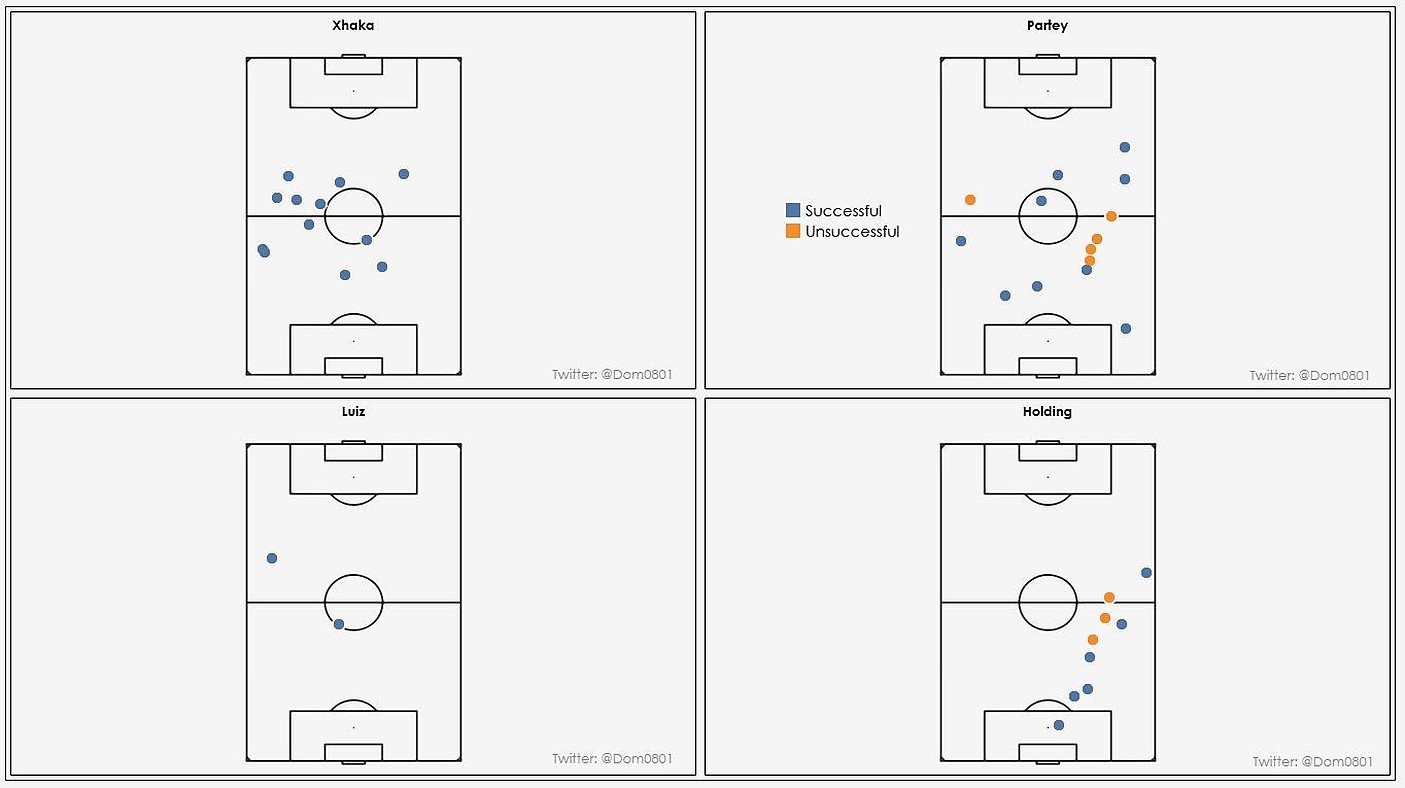 To couple with the previous point here are the Defensive Actions (Recoveries, Tackles, Aerial Duels, Blocks, Interceptions) that the Arsenal CB’s and CM’s managed from Monday’s game. Granit Xhaka put in a brilliant performance defensively as the Swiss international recovered possession 12 times. The most striking thing about this to me is the height at which the Arsenal players engaged Newcastle, with 12 successful turnovers in the Newcastle half from these 4 players combined as Arsenal seem to be moving more and more to a high pressing scheme.

That’s all for today, I will hopefully have a scouting piece on potential back-up Goalkeeper options up before the Southampton game on Saturday, our first of 2 meetings against the Saints in the next week.

Vieira thanks Martinelli as Brazilian pledges to...

Video: Brentford 0-3 Arsenal ‘On the whistle’

Newcastle were poor, but let’s hope we can take this form and confidence into the next, tougher, run of matches.

What happened to the possession value added graph of the by the visuals? I quite liked that. It was a really interesting component, but it’s disappeared of late.

It’s very hard to implement with a colour scheme for players that have a lot of touches. Ends up looking like one big paint blob! I’ll look to fix it and work it in going forward.

Looking forward to seeing what hidden gem goalkeepers you can find us. Will be interesting to see what we do there. Do we go with a younger promising GK or a pure back up option, albeit better than Runarsson. I see that Jack Butland can’t get ahead of Guaita at Palace, that obviously doesn’t bode well, but having an English player for backup GK would be a good way of getting a homegrown player in.

I’d rather we could use one of those spots for someone who can have a big impact on the team, rather than for squad players (especially if it’s a reserve goalkeeper who is rarely going to play).

Dom, can you please clarify how it is that Xhaka has 101 attempted passes but 102 touches? That would basically imply that he played virtually every pass first time which I don’t think was the case. This seems to be the case for most players when comparing the two stats and although I noticed that in general the ball was moving faster than usual last game, it seems like something is not adding up. Does it have to do with how touches are defined for the purpose of this statistic? I.e., striking the ball to pass it doesn’t count as… Read more »

Yes, so most Stats companies count touches as number of possessions basically. So if a player receives a pass, dribbles past an opponent and then passes it, th\
at counts as 1 touch.