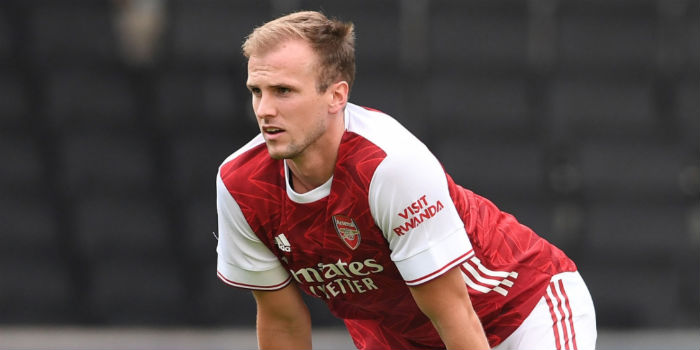 Mikel Arteta says Rob Holding’s progression in the 12 months since he returned from ACL surgery has been ‘incredible’ and that he deliberately blocked the defender from moving in the summer because he knew he’d be important for Arsenal this season.

Reports surfaced this week that the 26-year-old could be in line for a contract extension having played more minutes for Arsenal than any other centre-back on the club’s books.

After recruiting Gabriel from Lille and retaining David Luiz, the Gunners had nine players fitting that profile and Holding himself had doubts that he’d get game time this season.

At one point it looked like the former-Bolton player would move on loan to Newcastle United but with injuries sidelining his teammates on the eve of the season, the decision was made to retain his services.

Holding hasn’t looked back and was even rewarded with the captain’s armband at Goodison Park in December.

“It was almost a year ago when he came back from his injury,” reflected Arteta ahead of Saturday’s FA Cup clash with Newcastle.

“He had a period when he didn’t play and then he played against Leeds at home [in the FA Cup] and when you compare how he has evolved in a year from there until now, it’s incredible.

“It’s down to him; how professional he is, how much he wants to learn, how much he puts that into every training session. And then there’s his character and his personality. He’s growing in every aspect. I’m really happy with him.

Holding has already matched the total number of appearances he made last season (18) and surpassed his total number of minutes on the pitch (1,287 vs 1,528). Avoiding injury and suspension has played a part, but he’s also steadily grown in confidence.

Asked why he rated the defender when others were quick to dismiss him, Arteta explained: “It’s [because of] what I see on a daily basis from him. As well, the room he has for improvement, his age. I really like what I see.

“He’s earned the right himself. It’s true that there have been many other conditions that have led him to play so many minutes [this season], we’ve had injuries and other issues, but he has earned the right [to play] and nobody can question that when he’s played, he’s played well.”

Cant wait to see him and Gabriel play a few games together, He has grown into the role so much already, think that could be an excellent partnership.

Those two as first choice cb and Chambers and Mari as cover with Saliba to take over from Chambers or Holding in a couple of years. Don’t know when the last time was I said this but I think we don’t have to invest in that area for the next years, if everything goes well in terms of injuries.

It’s good and exciting. Chambers should run Holding close when he’s fit, he was in good form himself before injury.
While none are finished articles, it certainly feels good to have a set of young, competent defenders all with room to grow into legends for the club.

Was going to say the main difference is chambers is silky on the ball then I remembered holding has given us some ronaldinho moments 🤣🙈. It’s a good headache to have. Plus chambers is versatile so can play RB as cover or holding midfield if there is a injury crisis.

I don’t think Pablo Mari should make way for Gabriel when he returns.
Mari has barely put a foot wrong, and I think his better command of English has helped the in-game communication among the back four.
My thoughts.

Tough one isn’t it. I’d personally have Gabriel back in. Mari has had a far more cohesive team around him, but has still had the odd moment, and is fairly slow. He seems reliable but he doesn’t have that same aura that I think Gabriel does/ will have. Let’s put it this way- who d’you think you’d rather play against as a striker? Anyway, whatever decision’s made I’ll be happy with. Gabriel is obviously so young there’s a very strong case to be made for easing him back in.

Think Mari has done really well but Gab is ahead on pure talent I think. He’s easily been one of our best players this season and deserves to slot back in immediately when available.

Indeed. I must admit I also had high hopes for Chambers and he was doing quite well before his injury. I wonder if there is still any hope for him.

Of course. Chambers has what Mikel likes in a player; sufficient skill to beat a man and will always turn up.

And if unavailable, the holding chambers might be a good consolation

Yes indeed, that bald spot is coming in nicely for such a young lad

All beautiful men are bald, geniuses or extraordinary. Now bugger off you with your moppy hair do! Lol

I’ve said for years that it takes a bald man to play defense for this club.

Time for Steve to come out of retirement?

This might be the root of David Luiz’ struggles

Oh Luiz is going down the phil Collins hairline route too. He’s a lot less on the front than a few years back. Must be the stress of playing for arsenal. He will look pretty funny when it kicks in proper.

Possibly. At Chelsea, he was Head & Shoulders above the rest.

A P
Reply to  Brendan G

He is definitely not growing in the hair aspect.

Never did uncle Bouldy any harm.

Holding has been a firm favourite of mine since he and BFG did a number on Costa in the FA cup final. Out classed him and out-shithousryd him. Long may his reign of good form continue.

The Arsenal
Reply to  Goodly morning

Extremely underrated Cb Performance that was..Everybody who saw that line up (including me) thought we would get smoked…Holding is one of those players you have time for even when he is making mistakes. Possibly Wengers last great spot.

I like Holding’s competitiveness and mentality. Coming back from that injury wasn’t easy, takes commitment and hard work. Proper footballer and adds value to the squad. Remember Holding taking on peak Diego Costa and his shithousry, knew then he had the right mentality.

All those slagging him off last summer in favour of Mustafi must be feeling a right bunch of Charlies now.

bald man to 0lay for this club .Jesus don’t you remember cygan. what a donkey

Terry Mancini, anyone?
Fortunately, Holding is the real deal, in my opinion.

Well he IS better than Cannavaro so..

I hope he continues to progress. At 26 he’s no longer a “youngster” (although certainly not that old for a defender) so this is the time when he needs to “do it” on a regular basis in the PL. We’re not blessed with many quality defenders so need players like Holding to step up and improve a defence that’s generally been pretty poor for many years now.

Guns Up
Reply to  Biggles

Has he not been “doing it” in your opinion? He has in mine. And was before his injury as well.

Chambers is the better of the two. Better in the air and better on the ball.

Holding is much better box defender than Chambers. Always rated him better than Chambers. Chambers best year was when he was on loan and playing midfield. He apparently was quite good. Never thought he was much of a CB, don’t think that was his position in the academy, he was a Wenger conversion project.

Much more excited to see what McGuinness, Ballard and Saliba to offer. Have an inkling that Maguinness will be very good if given the chance.

So glad we didn’t send him out on loan, always have liked him as a player. Far more consistent and less error prone than players like Luiz, Mustafi, etc.