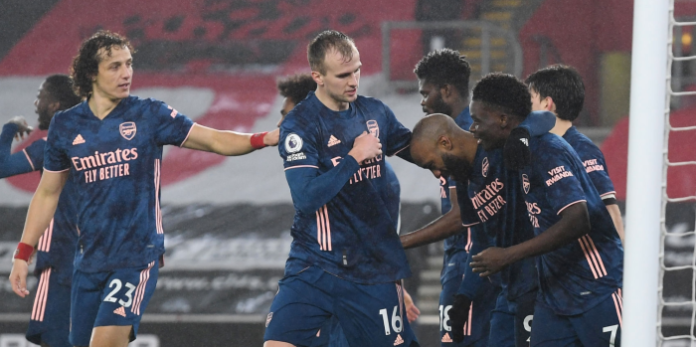 Rob Holding has revealed that Arsenal were aware of a weakness on the edge of their box from opposition corners so he was particularly annoyed that Southampton took advantage to open the scoring in last night’s 3-1 win at Saint Mary’s.

Arsenal have been impressively tight defending set-pieces so far this season but were caught out inside the opening four minutes when James Ward-Prowse found Stuart Armstrong with an out-swinging corner that the Scot, who was completely unmarked, swept home first time.

Nicolas Pepe’s quick-fire equaliser meant the Gunners didn’t have to dwell on the situation for too long before strikes from Bukayo Saka and Alex Lacazette sealed the points.

“We were disappointed to concede from a set-piece and it was something we looked at after the game on Saturday,” Holding told Arsenal.com.

“We saw the edge as a weakness of ours and they exploited it, so it’s a bitter one to take.”

Despite the early setback, Mikel Arteta’s looked determined from the off to produce a better performance than the one on Saturday that resulted with an FA Cup exit at the hands of the Saints.

For Holding, who was making his 100th appearance for the club, the weekend’s disappointment was certainly a motivating factor.

“After the weekend we knew we wanted to get them back because they celebrated and we were disappointed to go out of the FA Cup. It was a good bit of revenge.

“We were angry about the weekend’s result and we wanted to get back at them, so everyone was fired up for it. We came out the blocks straight away and Laca was unlucky in the first minute straight through on goal. But he got his goal towards the end which made him happy, and his effort and work rate was top today, so he deserved the goal.”

Cedric was equally pleased with the fight he saw from his teammates who have now secured 16 points from the last 18 available. Against his old club and fielded at left-back, the Portugal international played one of his best games for the club since joining last January. Afterwards, he admitted the squad are in form.

“In the Premier League anything can happen and right now we are in a good moment,” the 29-year-old told Arsenal.com.

“We need to use it because every point is important and we need to keep fighting for every point and every game. This is what we’re doing and we know we didn’t have the best start to the season, but now there, we’re working, the team is in great form and I hope we keep going.

“It’s the best league in the world, so this is great, honestly. The football becomes so much more competitive and it’s harder to win, but Arsenal is here to compete and we have our goals to achieve a high position in the league. We need to keep working to achieve it.”

Holding is coming into his best years, like him a lot, and Cedric is proving many wrong (including Southampton fans and me) atm, he played very well yesterday.

Although I’d prefer Tierney against Man U, I’m a bit less concerned about the left back slot.

100% on both. I criticised the Cedric signing (was very strange with injuries on his arrival and at his contract signing with large fees), but it’s starting to pay off. He has been class of late, particularly here and against Newcastle. I was worried about his inability to get past the byline after seeing him cut back so often in the Cup game, but here he went around the Saints on the left with ease, and they even seemed surprised by it. Major boost having an option other than Saka or the very defensive AMN option at LB. On form… Read more »

No foot Norbert
Reply to  Daveo

Cedric is showing bellerin up at the moment even out of position.

Cedric was a wolf defending that left flank too! He seems to be growing in confidence, if not slightly overconfident… A few times he pressed so high up the pitch, even beyond Pepe, that I thought, My goodness, who does he expect to cover for him? Surely not Pepe or Xhaka. But he got away with it.

I had no issue with Cedric’s signing as Bellerin was just coming back off a Cruciate ligament and Tierney was in and out due to his own fitness issues.

My problem was when they subsequently gave him a four year deal before he even proved his fitness let alone worth.

It is sweet to support Arsenal, it is sweeter when Arsenal is winning and the sweetest is to end up with yet another trophy at the end of the season

I think another trophy may just be a little too sweet at the present time, but you never know – “There are more things in heaven and Earth, Horatio, Than are dreamt of in your philosophy.” (as Wenger was reported to have said when he declined to sign Horatio).

Nothing is sweet until we finish above sp*rs and that twat manager they got.

If Rob Holding isn’t selected in the next England squad then Gareth Southgate must be watching a different sport.

Tbh mate, I’d rather he wasn’t selected so he can stay fit for us…

In a selfish way I do agree, but he deserves it.

We fret about our players on international duty, but come a big tournament you have to take pride when you see our players there, and it’s even better if they are representing your nation.

lol- no way is the guy at that level—

Great performance, COYG! Slight correction on the article, Cedric’s 29 not 31 😉

Our best right footed cb right now. Off topic not seen anyone comment on laca not getting that pen. Probably because we still won.

Spector Hell of a Win

A performance in which everyone stepped up. A real boost to come from behind. Next up, let’s go for back to back wins over manure. COYG!

Holding did really well as our sole centre back last night

I totally agree with everything Holding said here but it is a shame they weren’t more fired up for the FA Cup game in the first place, but had they won that game maybe they wouldn’t have been so good last night.

Holding is coming along leaps and bounds, I always thought there was something in him that was more special than a lot of the CBs we’ve been through in the last decade and he’s starting to show that.

You’ve got a point about the obvious difference in performance, attitude, whatever between the two games against Southampton. Given the fact that we’ve (still) got a very large squad I think that we’re entitled to expect a good result in both games, not an “either or”. Anyway, as far as Holding is concerned, he’s certainly coming into his own now so let’s hope that he continues to improve. We’ve had such a poor group of CBs (generally) for many years now which has been responsible in no small part for our overall decline in that time and slowly it looks… Read more »

Sorry, haven’t been at a game for a while

“Rob Holding has revealed that Arsenal were aware of a weakness on the edge of their box from opposition corners so he was particularly annoyed that Southampton took advantage to open the scoring in last night’s 3-1 win at Saint Mary’s.”

This was a lapse on Pepe’s part. He was caught ball watching rather than defending. Good thing he redeemed himself by scoring the goal.