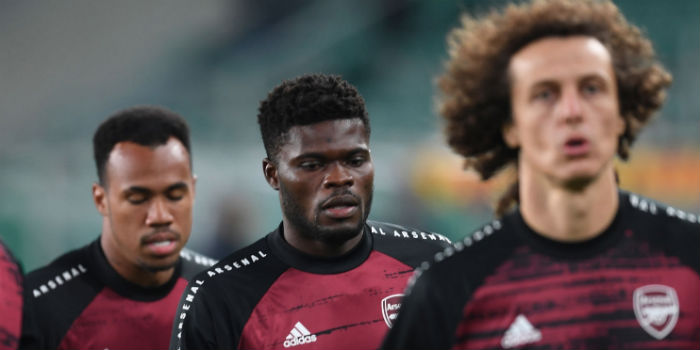 Arsenal have confirmed that Thomas Partey has resumed full training with his teammates and could be included in the squad to face Newcastle United in the FA Cup on Saturday.

The Ghanaian has played just 45 minutes of football in the last two months after picking up and and aggravating a thigh problem.

In the latest fitness bulletin, the medical team report: “Thomas is now back in full training with the squad after recovering from an injury to his left thigh.

Thomas will continue to work hard to establish match fitness after being out of action for a month. He will be assessed regarding his availability ahead of Saturday’s match.”

At this point, the only other doubt for the game is Gabriel who continues to self-isolate after contracting Covid-19. The centre-back is showing no signs of illness so could be reintegrated by Mikel Arteta later this week.

It’ll be curious to see whether the boss rotates for our defence of The Arsene Wenger Invitational (Plague Island Edition II).

We should learn more when he faces the press later this morning.

Here’s what the boss said about Partey in his press conference: “Well, we have an extra two training sessions [before the game] and we will assess after that whether he is completely fully ready to participate against Newcastle, or if we’re going to leave it another few days for the Palace game. He is training really good, he is comfortable, he is not aware of the injury right now and he has done more than what he already did before he played after the injury against Spurs, so he is in a good place, a good mood and you can see the player he is when he is training.”

Now you are being unkind. They have won 2 League Cups and the Audi Cup in that time 😂😂😂

I saw him all smiles in a training video uploaded to YouTube.

Nice to be back.

Some good news for a fucking change. Amen.

Glad he’s back but only give him a cameo in the Newcastle game please. No point rushing him back for an FA Cup game when we need him for Europa and Prem so bad…

Might be our only way back in Europe. Too early to tell

Is the FA Cup three substitutes like the prem? Or is it five, which would allow us to play Partey the first half-hour or so without regard to the game situation.

Hopes he’s on the bench, and gets a run out for the last 10-15 (dependent on scoreline, injuries and red cards).

Our first signing of the winter window seems to be Omar Rekik from Hertha Berlin.

This guy is going to add so much value to the team. Very very excited.

So would this mean that our squad is injury free? That must be a first in quite some time

chambers is still out

Left to me, I see No need to rushing partey. there is still loads of matches available for him to play. Let him be 101% fit before starting him so as to prevent any setback

That is impossible. No one can be more than 100% fit. By definition, that is the fittest that anyone can be.

This is good news.
If we are lucky in the injury…and COVID front, Top 4 is still within our reach.
Leno, Bellerin, Holding, Mari, Tierney, Partey, Elneny, ESR, Saka, Auba and Laca, can match most team in the EPL.
AMN, Xhaka, Luiz, Gabriel, Martinelli, Pepe, Willock and Nketiah, is not a bad bench.

*I think we need another back up keeper.

Stranger things have happened! Anyone can lose to anyone in this league. Gabriel for Mari and Xhaka for Elneny though. Possibly Dani instead of Xhaka depending on who we are playing.

It seems far-fetched, but this is a strange season, with game compression and covid and resulting fitness issues. No one is going to get 90 points or anything like it this year. Every team has had bad patches and are likley to have them again.

Great news about party. He is needed in the midfield engine.