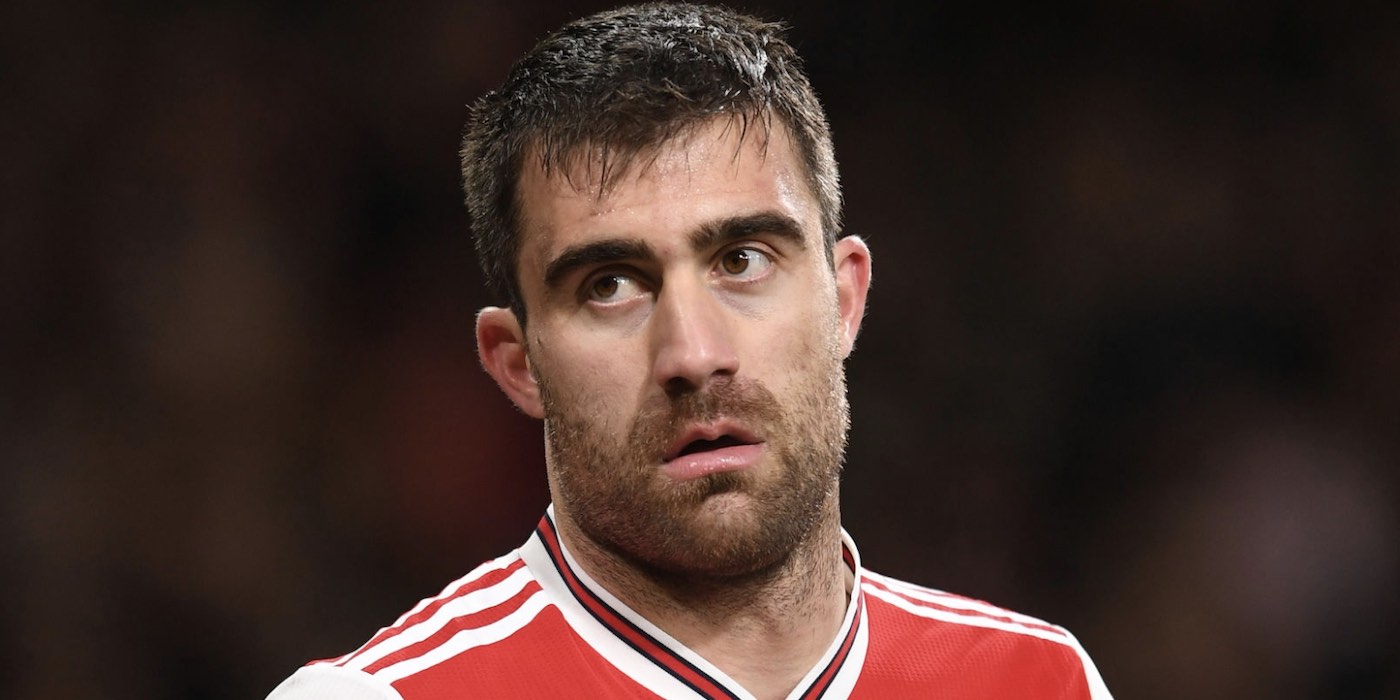 According to various reports in Italy, Genoa are keen to sign Sokratis this month.

The Greece international, 32, spent two seasons with the Serie A side between 2008-10 and is being eyed as an alternative to Denis Vavro whose move from Lazio has collapsed due to injury concerns.

Arsenal aren’t likely to stand in the way of either a loan or a permanent move with the player out of favour and soon to be out of contract.

Napoli had planned to sign Sokratis as a replacement for Kalidou Koulibaly in the summer but left the Greek in the lurch when the Senegalese decided to stay put.

To rub salt in the veteran defender’s wounds, Mikel Arteta opted not to select him for his Premier League and Europa League squads.

If reports in Greece and Turkey are to be believed *cough*, Sokratis has also been contacted by Olympiakos and Fenerbahce.

Genoa it is then!

I’d get that cough seen to if I were you, Andrew.

Good luck to him, hope it goes well. He may not be the best but he gave his best.

Man I would’ve loved to have seen the reaction of the Napoli fans watching Sok’s first game after being told he was the replacement for Koulibaly.

I agree, he wasn’t the best, but surely he is not the worst CB we have on the books. He did OK, gave 100%. Shame to see him go, and wish him all the best. One of few players at Arsenal with some fight in his belly.

Well, in reality he was very average and the fact that he wasn’t the worst CB on the club’s books says volumes about the plethora of sub-standard defenders Arsenal “collected” over the past five seasons or so.

How many would have got through the gates of the training ground, let alone into the squad, of any of the leading PL clubs is the telling question.

Don’t know where the bad reputation cones from within the arsenal fan base. I never thought after any game that the guy had made a mistake. Always switched on aggressive and generally in the position you’d want him to be. Seemed to suffer from our frustrations more than anything

Sokratis was fine for Arsenal. Just not a good fit for Arteta or Emery’s playing out from the back waffle. During the end of Wenger’s era and beginning of Emery, I always felt better about our defense when he’s playing. Never spoke bad about the club too in his recent “exile”. Proper player, wish him the best of luck wherever he goes.

I’m with you, he’s definitely not that bad! Feel quite sorry for him in some ways. Just a bit too old school and not fancied by MA.

Agreed. In terms of pure defending, positional play and a bit of nastiness we’ve all craved in our players for some time, he was good enough. And strangely I recall him being in the top few in sprint trials a couple of years ago. Decent careers in Germany and Italy. If not for the desire to have central defenders who can pass he’d be one of our better central defenders behind Gabriel of course.

Loved the way he celebrated a good tackle

He’s a decent if limited player. Always did his best and I liked his shithousery. I hope he makes a move in January for his own sake and best of luck to him if he does.

I”m playing ghost of tsushima like crazy lately so I read for his own sake *japanese brew*. I’ll get my coat.

An excellent shit houser. That’s his legacy for me.

And when banged in that volley against Portsmouth in the FA Cup. That was great.

We’ve got far too many players.

The sooner we purge our squad of players who don’t have a future here, the better.

We need to recognise the strength of our hand, which is very weak

And the strength of the market, which is also very weak, and it’s much more likely to get weaker, than stronger.

True in all respects. We’ve so many players to offload and we’re trying to do it at the worst possible time. We’ll remove some in the summer when their inflated contracts run down, but there will still be several left.

Our injury record means we need a big group of players.

Public Elneny
Reply to  A P

Academy players like Azeez, Balogun, Cottrell etc should be able to cover for injuries in a fringe 1st team role though We really don’t need high paid, average talent, mid-late career players to fill those fringe roles. They inevitably become complacent, consume our transfer and wage budget leaving us short for the players that really matter, and block opportunities for our youngsters to develop. The only position I’d consider buying an experienced backup for would be GK And besides, we’ve seen many times how far the enthusiasm and energy of youth can get you. Far further than a Willian or… Read more »

Not solid enough for the rigours of the PL though. He had a poor disciplinary record – too many unnecessary bookings.

He is good enough for PL … he just does not fit the way we want to play currently. I hope he will do well where ever he goes if a suitable move materialised for him this January window.

Genoa sounds like a good move for him, I hope he gets the move and does well. He’s always given his best for us.

Always had time for Sokratis. He’s no Cannavaro but he is a decent pro. Amazed he was left out of the squad instead of an injured Mustafi.

Probably because with all his flaws mustafi is decent on the ball, while Sok is an old school CB. I’d rather have him than Mustafi though, I agree.

thought he was very unlucky to be frozen out as he is a better defender than mustafi,luiz and kolasinac

True, but that doesn’t say much.

Good news, let’s hope there are no problems and the move can be completed asap. We need to shift the “passengers”.

Can’t seem to generate sufficient income to move players on. Edu needs to clear. So many defenders. Chambers for one. Mustafi, Sokratis, Kolasinac. Too many people like to say sell but who will buy? Too many simplistic prattle on about get rid of this player or that as if it was an easy thing. And considering outlays already committed to Saliba and Pepe, last summer we went over with Partey on 45m plus Gabriel on 24m…wage bill also clogged p by non performers plus Ozil and Willian more recently Edu self inflicted damage…we will have difficulty adding on and may… Read more »

My issue with much of the chat on football forums and groups and even from the press (who should report more accurately but that gets in the way of a clicky story).
Ppl think its as easy as FIFA on your Xbox to navigate the windows and discuss it like it is.

I think Chambers should be given a fair chance before the club decides his fate. Versatile, decent passer and seems to have the right attitude and values. Did well right before his injury.

Not his fault, but another costly stopgap signing who ultimately provided little value. Wish him all the best in the future tho

Mr Sokratis….if enthusiasm made good defenders.
Serie A refs will get a good arm workout from all the cards they’ll be giving him.

He’s been successful there before. Shouldn’t be a problem

Wish him the best, he seems like a stand-up guy.

As opposed to Mustafi, who’s much more a go-to-the-ground guy.

I saw what you did there 😀

I wish Sokratis Papastapalopodostapolous all the best.

I can only imagine the money spent to money recuperated after this next summer, without selling some young assets we look like a Gucci store in the middle of a peaceful riot

We shouldn’t forget, amongst all the crap going on at the moment, that he’s actually a decent player who’s performed well for us. Just wasn’t Arteta’s cup of tea.

Think you might be getting him confused with uhm every other cb who ever played for us…this dude is a championship-level clogger who should never have been signed in the first place.

I think you may have had him confused with Mustafi. Sokratis didn’t cost us too much in transfer fee and performed well, until we decided to be a poor man’s Pep team and pass out from the back.

U can say that again, if you are in the queue and mustafi, luiz and kolasinac are considered better than you by the manager and one of them is not even a centre back, then I would say you are not fancied. Quite frankly how any of the 4 still have a contract with the club is beyond me. Same goes for a few others too.

Difficult to say where he’ll end up. I doubt he knows either. I wonder if he knows that he knows nothing?

True to your name, Mr. Krystal!

He came from Greece, he had a thirst for porridge…

Great news if true as I did not expect Arsenal to get any fee for him.

It’s time our club embrace our ethos that we are known for and stop treating our players as commodities. We are Arsenal and I wish the current management knows that.

Sokratis leaves for Turkey, Greece or Italy. Luis leaves for Portugal or a return to Brazil. Mustafi is signed as a Barca bench warmer. Mavrspanos signs permanently in Germany. Chambers is sold back to Fulham. That leaves us with an emerging young star in Gabriel, two solid performers in Mari and Holding, a kid who has been disastrously handled but is still a big wild card in Saliba, and three solid academy prospects in Dan Ballard, Mark McGuinness, and the new signing Rekic (who’s transfer paperwork, by the way, like Saliba’s was also screwed up by the club preventing a… Read more »