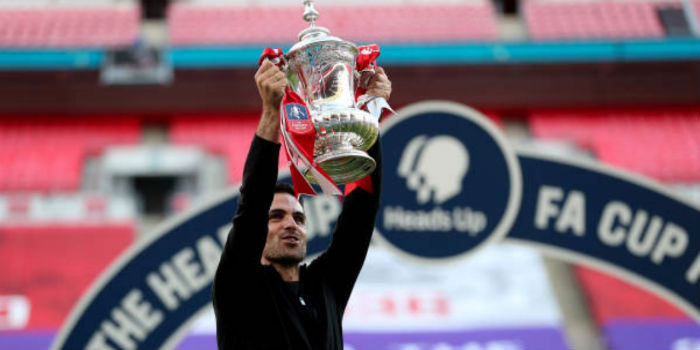 It’s been confirmed that Arsenal will face Southampton in the FA Cup 4th round after Ralph Hassenhutl’s side beat Shrewsbury Town 2-0 this evening.

The match had originally been scheduled for last weekend but was postponed after a Covid outbreak at the League One side. The Saints had to park a showdown with Leeds to squeeze in the fixture and won relatively comfortably despite rotating heavily.

Having played Newcastle twice in quick succession, the Gunners will now play Southampton twice in the space of four days.

Saturday’s FA Cup game, set to be shown on BT Sport, kicks off at 12.15pm and we’re back on the South Coast for a Premier League clash on Tuesday night.

Love to enjoy the cup match but the League game has to be a priority now….keep the run going.

Win not enjoy but both would be nice.

Time to wipe the smile off Walcott face twice.

Viv The 🐐
Reply to  Runcorn Gooner

Yeah, definitly. If we somehow win the FA Cup again, it would be probably one of the hardest runs like forever. Probably only PL sides (Newcastle, Southampton, Wolves ……) But let’s go game by game.
Up The Arsenal!

Daveo
Reply to  Viv The 🐐

If we win the FA Cup? Isn’t it already engraved?

Why do we never seem to draw clubs outside the PL?

Because the system knows we’re awesome enough to dispatch the top competitors.

It knows we have to put out a strong side rather than risk the banana skin of weaker team against lower league. Possibly our worst performance last season was against Championship team, albeit Leeds.

I’m not sure how much we should rotate, and if Partey/Tierney should feature much in this match. I hope Martinelli gets more action. We really have to take care of people, though I think we have quite some options. If they all work together is the burning question. No ESR for me, he is too important. But who is gonna take that 10 spot is really interesting. A Willock? Willian? I also talk about Pepe? Nelson? 442? Will be interesting. I hope the opponent also plays a weakened side.
Up The Arsenal!

Biggles
Reply to  Viv The 🐐

Well, we’ll have to rotate to avoid the dreaded “tired legs” that MA keeps on about – the problem is that he knows as well as most of us do that although we’ve the numbers (a huge squad that’s far too big in reality) we don’t have the quality in depth that other clubs have. As the season progresses through the early months of the new year, we’re bound to pick up injuries and possibly more suspensions. At the end of the day, he’ll have little or perhaps no choice but to use an increasing number of players. That’s when… Read more »

Question is how will the roation look like, and will it be capable to perform, without rescuing the team like against Newcastle. I want to see both Gabriels, Pepe, Nelson. Though if that can really work together, I don’t know. Again it will be dependent on who is going to play behind the striker. We see the difference now. But can someone say “what’s up” as a decent backupoption for ESR?

I would guess something like Leno; Bellerin, Luiz, Gabriel, AMN; Elneny, Xhaka; Pepe, Willian, Martinelli; Lacazette.
With the strongest possible bench.
I don’t think Arteta is convinced enough with Willock, Nelson, and Nketiah to start them in a knock-out cup game.
Haven’t read any injury update on Ceballos’ calf but if he’s fit I’d probably play him ahead of Elneny.

What does everyone think of Ceballos now? Prior to March last year I was happy to see him go. After March I wanted us to sign him permanently. Now, I have no idea. Such a hot and cold player.

He’s not what we need. He’s part of a two man pivot. Arteta rates them Partey #1 and Xhaka#2 Dani#3. This seems right to me. Even Xhaka isn’t good enough for what we ultimately need to partner Partey. We need a Ramsey type to partner with Partey. Dani needs to go back to RM which is where he see’s himself. Personally, I think he’s a midtable player at the moment.

If you take a look at our fixtures from now to the end of Feb, there is going to have to be a lot of rotation, and not just in the FA cup. It’s going to get tricky. It’s not just a problem for Arsenal to be fair…

absolutly. That’s why a reaspnable rotation is so important. But just thinking about the first Newcastle game: we had to be bailed out by the players we wanted to rest. That does not show, that the rotation team got the job done. Now hopefully with Martinelli, there will be more offensive drive.
It will also show, how much Arteta wants to rely on certain people and certaintly, which players could make a case for going up the pecking order.
Up The Arsenal!

Olof
Reply to  Viv The 🐐

The only one who can replace Smith Rowe in that position is Martinelli.

I wonder how close to the PL first team Cirjan and Azeez are currently. Surely one of them could come on for 20 minutes when the Rotated are not getting the job done and we need a bit of creative spark to get the result. Seems like the most obvious solution that maintains creativity. Unless they are nowhere near the mark.

The FA Cup is probably our best chance of a trophy this season but we must improve our PL position so the league game with them is the priority.

We already have a “trophy” this season (Community Shield) so dw, no matter what we will have a better season than Sp*rs

much as I hate to contemplate this, they are in a cup final – could be the end of the old ‘reserve goalkeeper x has now won more than Harry Kane’ jokes

Technically correct, but I remember a time when we didn’t include that one as a “trophy” – and there have been occasions when it’s been shared of course which doesn’t happen with genuine trophies. However, needs must when we’re pretty desperate to chalk up silverware. As to having a better season than Sp*rs, that depends, in part at least, upon the result of the League Cup final surely. Last time I checked we aren’t in any finals (Community Shield apart). Of the two, I suspect 99.99% of Gooners would go for a League Cup over a Community Shield, particularly as… Read more »

We’re by far the greatest team the FA cup has ever seen. Soton will be shaking in their cleats.

Have you had a traumatic experience with cleats, Dave?

A cleat is a device to which one ties a rope (see sailing, mountaineering).

The match will be shown on BT Sport and not BBC.

I’m more confident of Arsenal winning FA cup matches more than the League. Probably the players know they have only one chance while in the League they believe there is always the next game.
Guys we are winning the FA Cup again this season

It would be odd if the players really did think as far as the PL is concerned that there’s “always the next game”. Eventually that wouldn’t be the case of course but more importantly, if we continue to drift around the middle of the PL it will have far more serious consequences for the club and players in terms of finance, sponsorship, ability to attract new signings etc. The highest PL position must surely be the club’s priority so, hopefully, we can secure an automatic EL place next season (mind you, it shows how far we’ve declined with that as… Read more »

Here is a question for you all regarding priorities: what should we focus our primary attention on? Europa, FA cup or league? The league is interesting as it looks like teams are going to drop points when you don’t expect it (Liverpool being a case in hand), but do we have enough in us to get forth or would we be better focusing on the Europa? Then in the FA cup we, unlike easy ride spuds, have tough opponents!!

I’d say, focus on the cups while we are in them. (I don’t think they are overlapping, so for me it is not a question FA Cup or Europa League — the focus could be on both).

Realistically, I don’t think we stand a chance of a fourth place PL finish this season. Yes, other teams drop points – but so do we (Crystal Palace springs to mind, but City had no trouble demolishing them in their next game) and we need to gain points on an awful lot of teams above us – several of which have a game or games in hand to start with. Basically, for all the “improvement” over the recent matches which is welcome, we’re treading water in the PL – not going down (thank goodness) but still stuck in mid-table –… Read more »

Unrelated: i just saw a rumour about a loan for Martin Odegaard. His signing would be a breath of fresh air.

2 trips to St. Mary’s. Ugh. I still have nightmares how they trashed us 4:0 over there amidst their horrible run.

It’s an ideal match for rotation…….. it seems to me that the lads coming in , whilst still under pressure to “show”, are under less pressure now and can relax a bit out there.
This is particularly gonna apply to Willock, Nelson and Pepe.
It’s a big chance for them to step up.
I’d really like Balogun to get into the squad here too, but I think he’s in a funny place behind Eddie🤷‍♂️

Another FA cup win would be fantastic, but Tierney or Saka should be rested.

Willian should be dropped, much rather Willock + Martinelli get opportunities