West Brom 0-4 Arsenal: By The Visuals

Arsenal made it 3 wins in a row as Mikel Arteta’s side ran out comfortable 4-0 winners on a snowy night away to West Brom. It’s amazing what a week can do in football as Arsenal have gone from potential relegation candidates to only 3 points off a European place after 3 wins. It is also very pleasing to batter a Sam Allardyce team after he ran his mouth claiming Arsenal were relegation rivals for his West Brom team.

Let’s take a look at the data to see if we can gain any insight into the game. 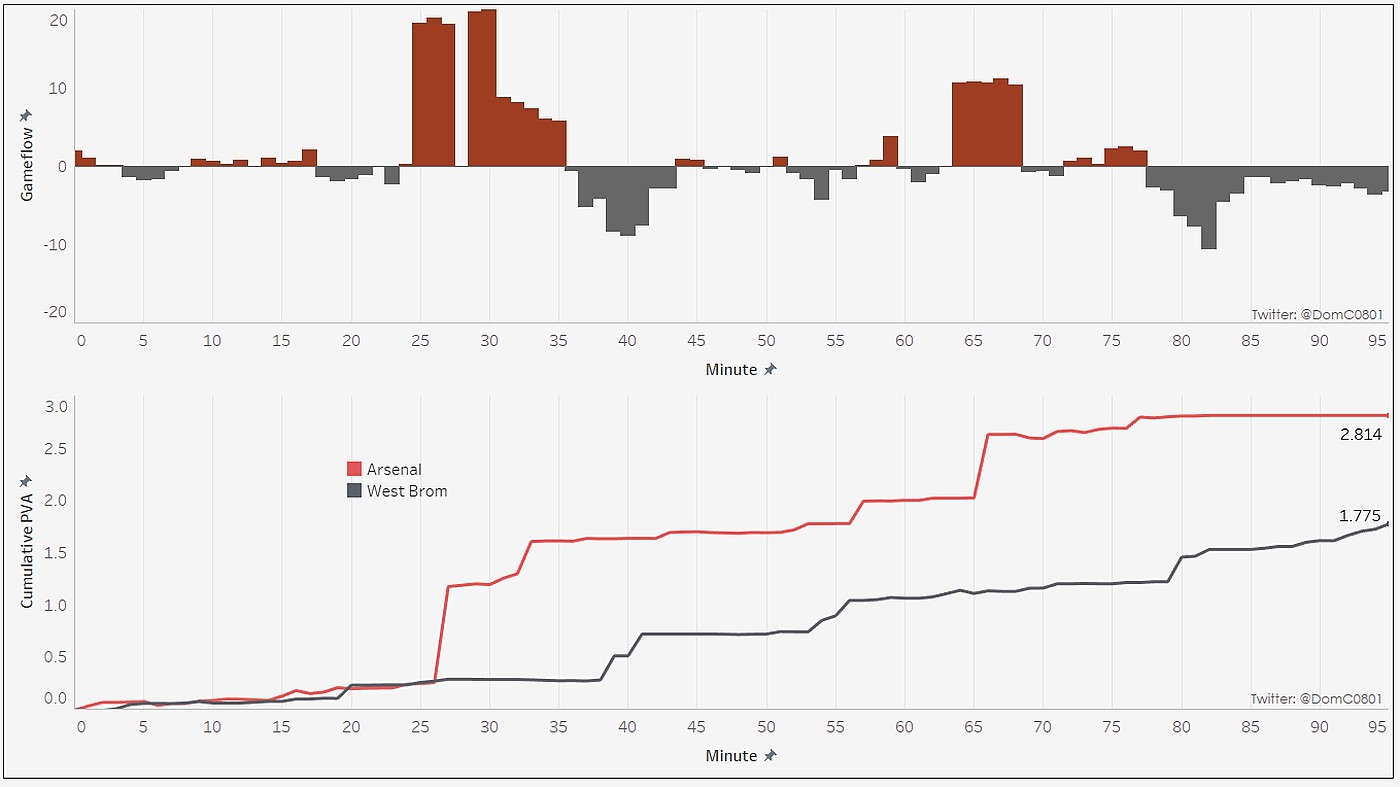 Arsenal largely dominated proceedings and tore Allardyce’s West Brom side to pieces until they eased off after 75 minutes. Mikel Arteta will be delighted to see Arsenal capitalising on a period of dominance and putting a game to bed without any disciplinary problems affecting proceedings. These promising underlying numbers make these wins even more encouraging as Arsenal are justifiably winning these games and put up our best xG total (3.79) for the season according to Scott’s By The Numbers. If we can replicate these kinds of performances consistently then things are definitely looking on the upward trend for Arsenal and Mikel Arteta. 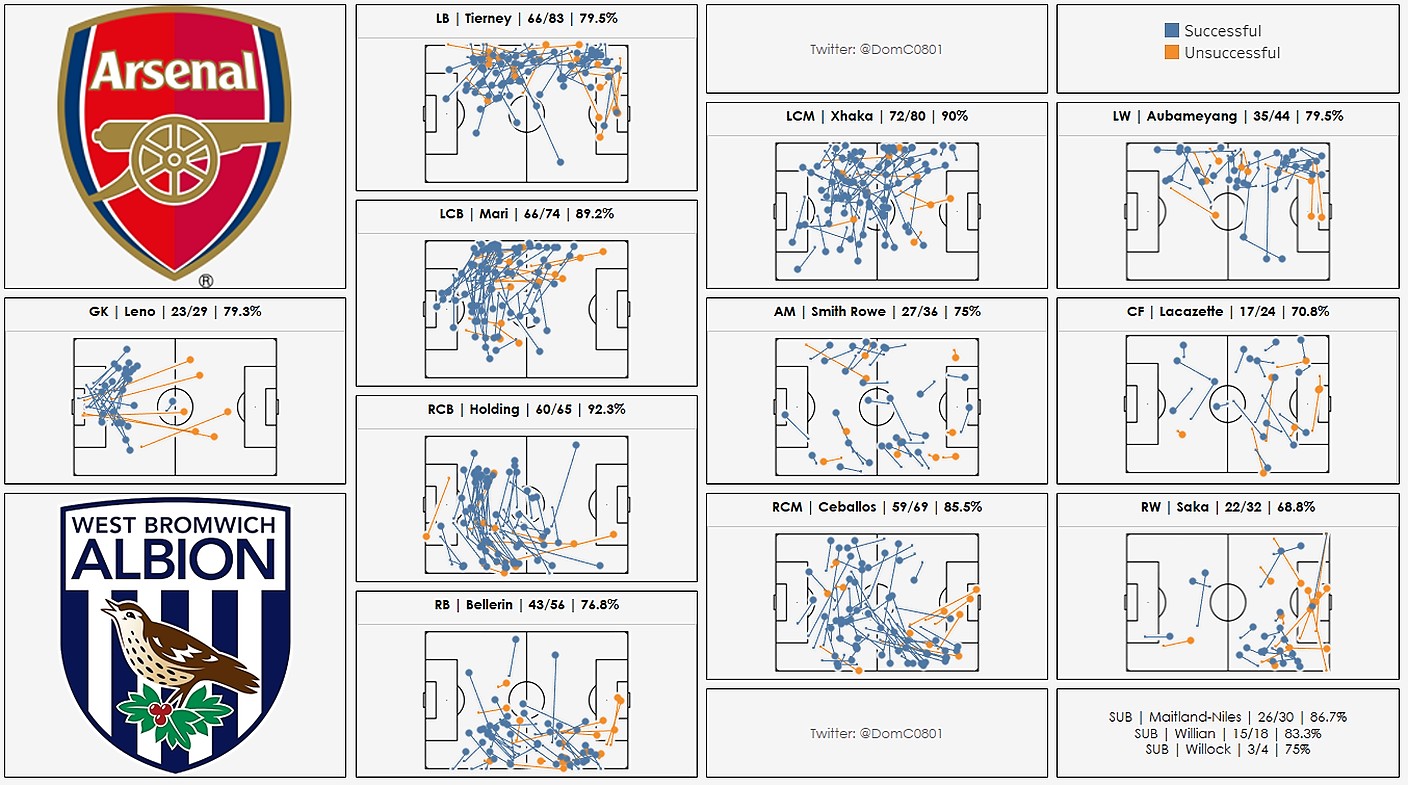 Here are the Pass Maps for all of the Arsenal Starting XI (the dot denotes the end location of the pass). Arsenal dominated the flanks, as Emile Smith Rowe moved from flank to flank helping Arsenal get in behind the West Brom defence and consistently creating problems for Big Sam’s side. Kieran Tierney and Hector Bellerin were firmly placed in the West Brom half as Arsenal dominated possession and territory and suffocated West Brom.

This is further shown by Scott’s Passing Networks where we see Bellerin and Tierney high up the pitch with our left hand side group of Mari, Tierney, Xhaka and Aubameyang being our best method of ball progression. Bukayo Saka’s role on the right wing has allowed him to have more of a presence in the Final Third as the Hale End graduate has proved to be arguably our most important player in recent weeks. 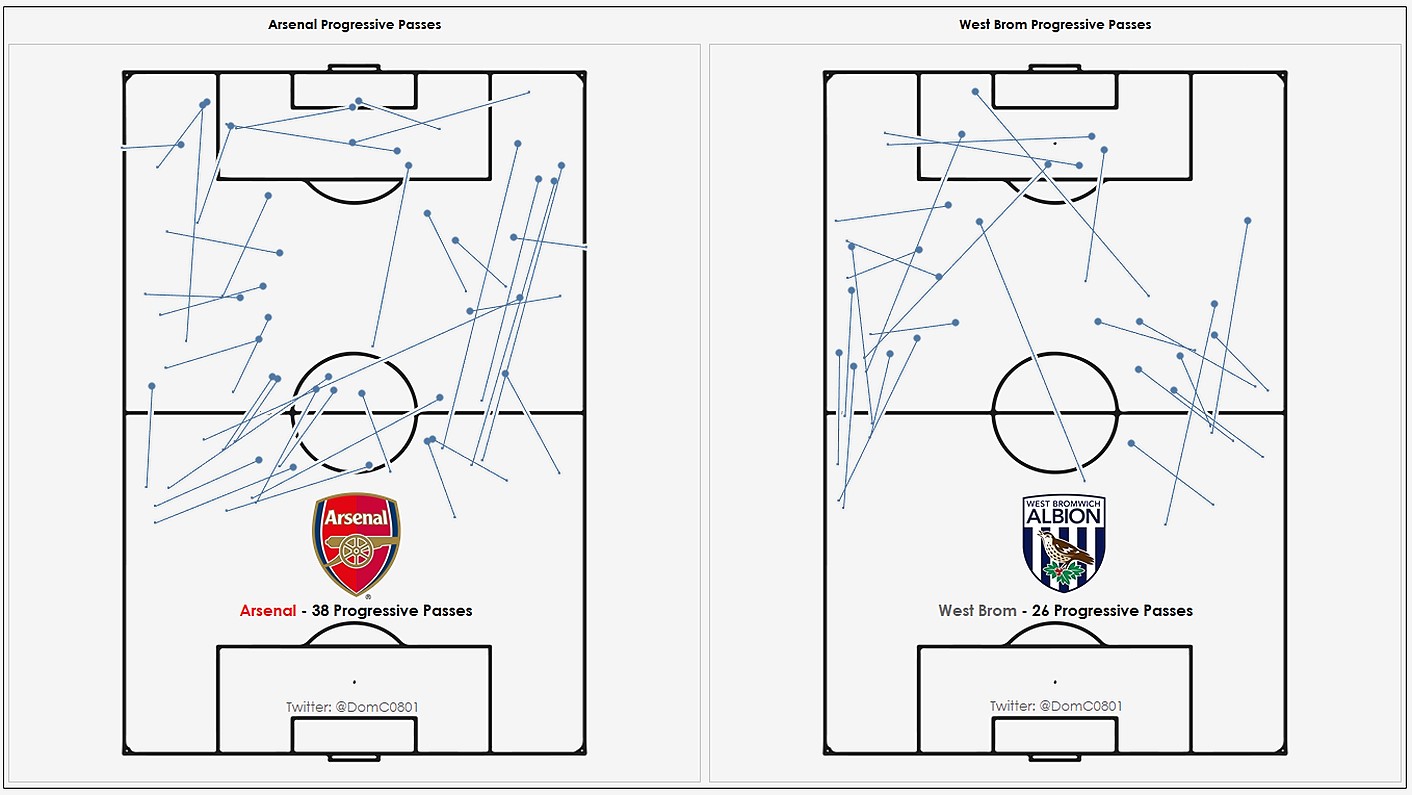 The above shows the progressive passes from each team. Arsenal managed to consistently progress the ball down the flanks. West Brom found joy down Arsenal’s right hand side but it did not lead to many troubling moments for Arsenal. 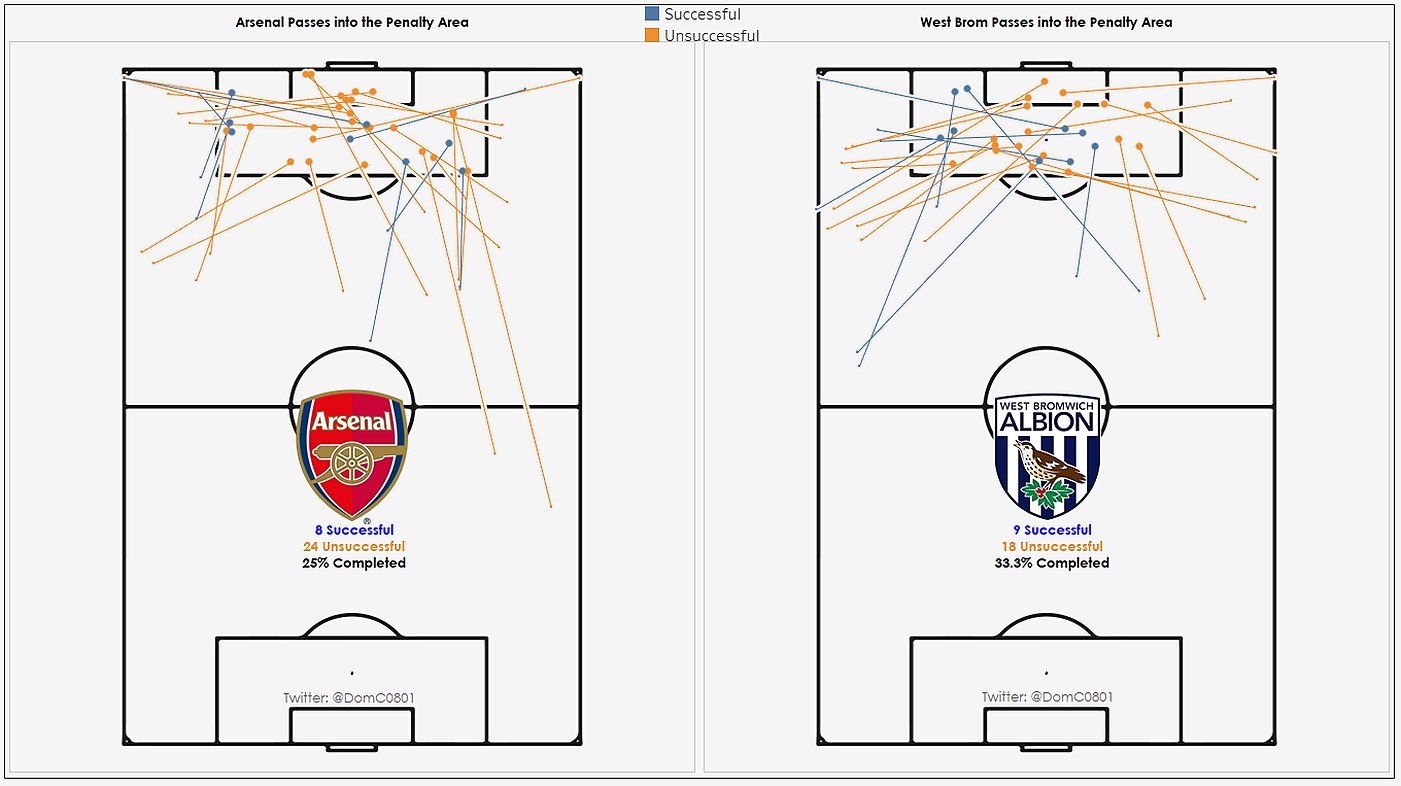 Above are the passes into the penalty area from both sides. These numbers may seem a bit off but it can be explained by the presence of a group of proficient dribblers (Saka, ESR, Tierney etc.) who allowed Arsenal to get into the West Brom penalty area at ease.

That’s it for today. Arsenal play Newcastle in the FA Cup on Saturday before a midweek match against Crystal Palace at the Emirates as Mikel Arteta’s side will be looking to build on a very good week.

It looks like ESR did not complete a single pass to Aubameyang. That might be a combination that will also help PEA get more shots in the future.

And sorry for not being polite, thanks for the analysis Dom 😊

I agree that Saka has been our most lively player and certainly up there in importance; however, I think Smith Rowe is actually the most important change we’ve had to the side. You can see by his passing map that he’s in whatever position he’s needed in order to oil the machine. I don’t think Lacazette or Saka would have had the same run of form without Smith Rowe’s performing the supporting role. Looking forward, this emphasizes our need to invest in this position since Emile can’t play every single game. But he is certainly a shining talent, and long… Read more »

I agree with you that Smith Rowe might be the most important change, especially where Lacazette is concerned. However, Saka has shown the ability to create problems for the opposition either way.

What I would like to see is, when Saka needs a break, whether Smith Rowe can help unleash Pepe.

That’s a very good point. I was actually hoping before the game that we would rest Saka and play Pepe against WBA just given the opposition and to see if it could work. Obviously I’m pleased with how it turned out though. The only thing I’d counter about Saka is that he was our “silver lining” before we had our upturn in form. He was very lively and looked much better than our other attackers — but at that point he was still not coming up with end product in assists or goals. Now that ESR is in the team,… Read more »

But some of that is that he is now playing behind the striker, a formation which Arteta has not used much previously. this has allowed more passing triangles and allowed Saka, tierney, martinelli to carry the ball into the box putting more pressure on the defense than passes on the flanks. I wonder if in times where ESR needs to be rotated out if Ceballos could do better in this position than as a MF trying to cover more ground. I think he has the cleverness in his passing and with instructions to attack the box he might do well.… Read more »