Sunday’s 1-0 defeat to Manchester City ended up being settled in the opening 77 seconds as an unmarked Raheem Sterling headed past a stationary Bernd Leno.

With one eye on Thursday’s second-leg against Benfica in Greece, Mikel Arteta rang the changes from the side that drew the first-leg in Rome. In central defence, Pablo Mari and Rob Holding got the nod ahead of Gabriel and David Luiz, and at left-back, returning from injury, Kieran Tierney replaced Cedric Soares. Elsewhere, Mohamed Elneny came in for Dani Ceballos and Nicolas Pepe allowed Emile Smith Rowe a first rest since his breakthrough back in December. 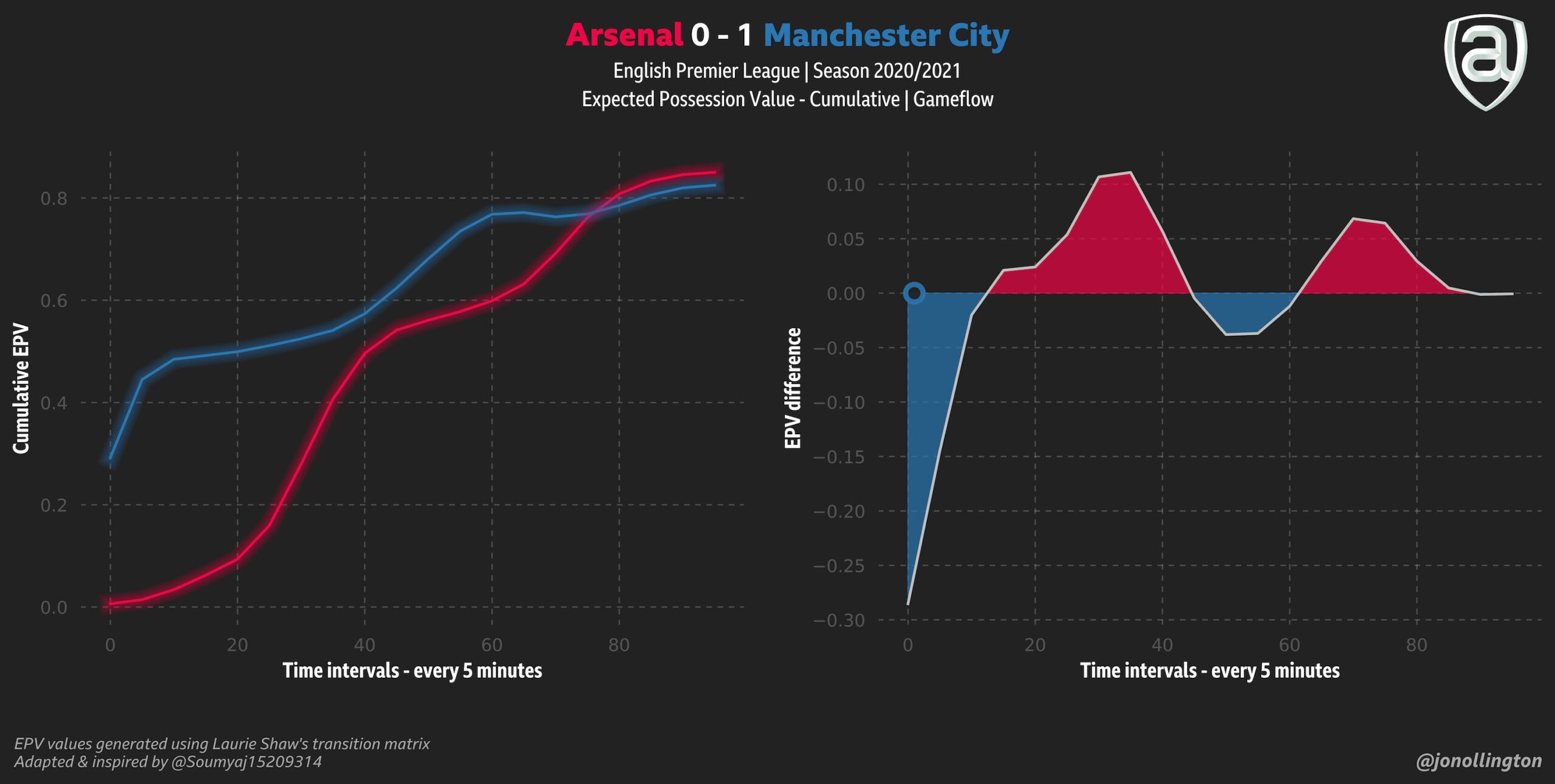 Above are the cumulative Expected Possession Value (EPV) and EPV gameflow plots that depict the probability of either team scoring from possession during yesterday’s encounter.

The possession value plots do a good job on their own of summing up Sunday’s encounter. Manchester City flew out of the traps, scored early and always seemed to have an additional gear if needed. With seven minutes gone the score could have been much worse, but Arsenal did gradually find their way back into the game – as outlined in Lewis Ambrose’s tactics column. 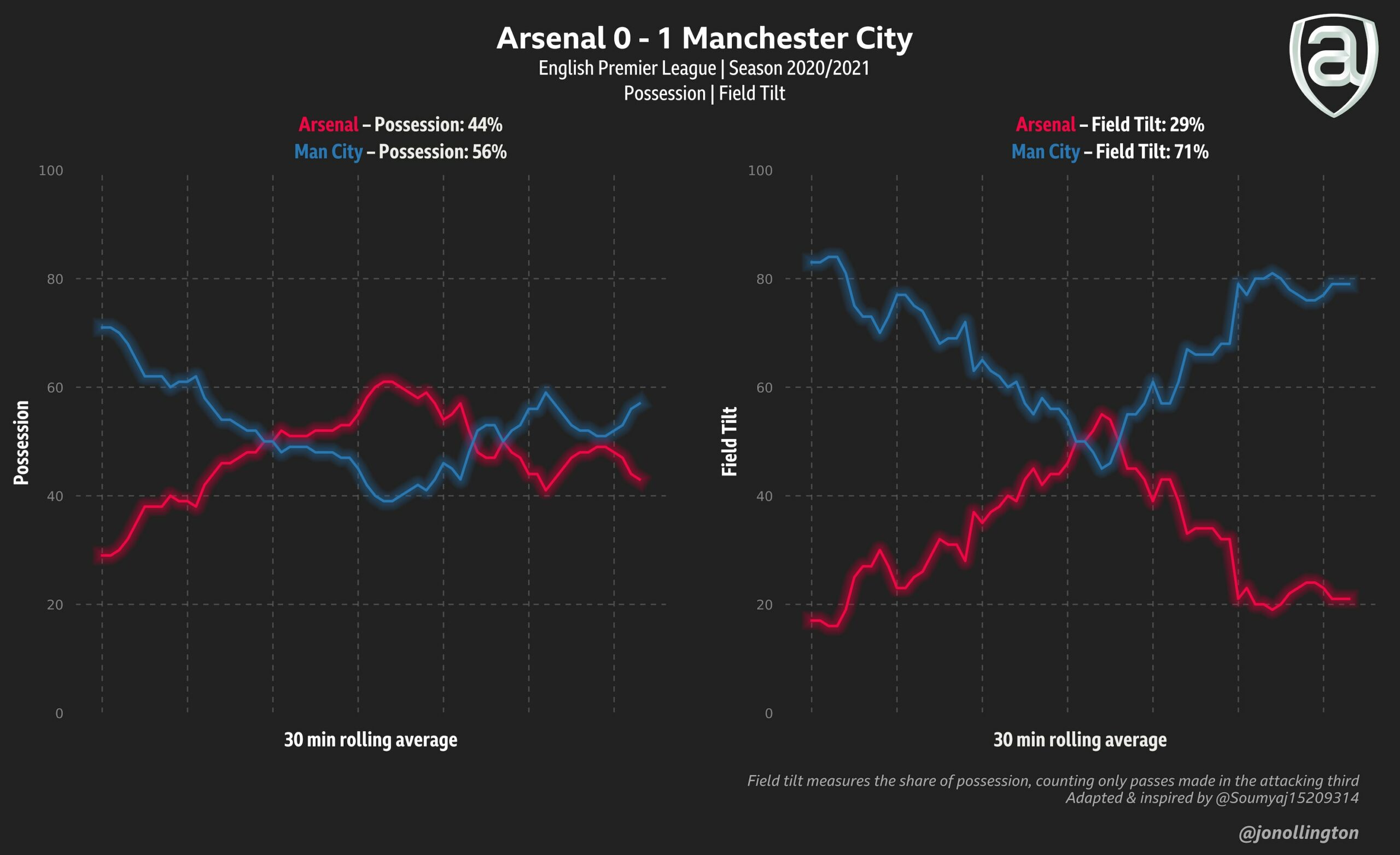 Above are the Possession and Field Tilt plots. Field Tilt measures the share of passing made in the attacking third.

However, while the home team saw more of the ball and City became less of the threat that dominated the initial exchanges, Arsenal never really sustained any form of continued pressure in the final third, as shown above in the Field Tilt plot. Manchester City have only conceded two goals from open play in their last 17 Premier League matches, and despite a few half-chances Mikel Arteta’s side never really looked like adding to that tally. 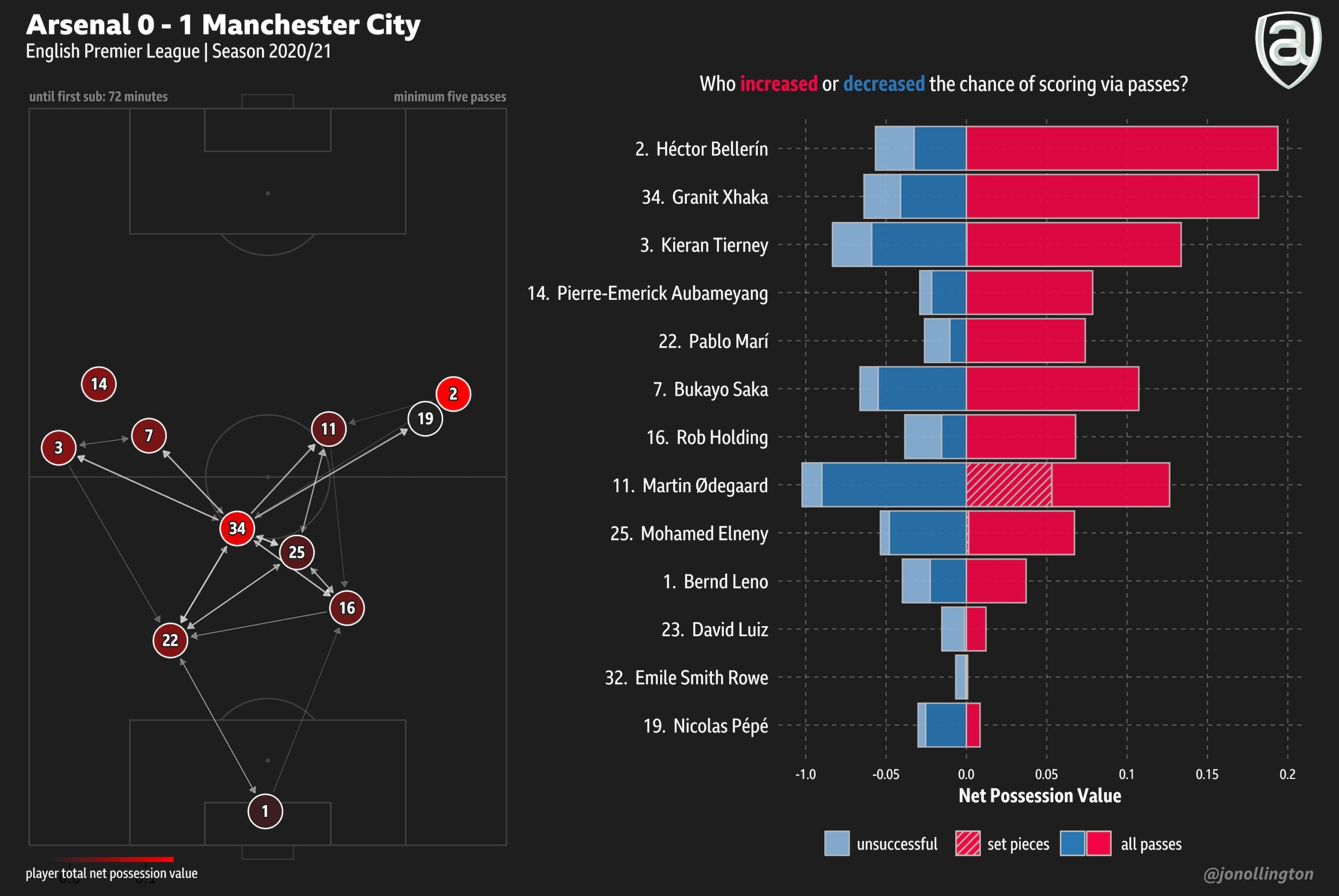 Above is the pass and position network until the first sub at 72 minutes and individual net possession value ratings.

Arsenal’s pass and position network highlights how narrow and deep the central midfield was as they looked to protect their central defenders with both fullbacks trying to exploit any space left by their opposition equivalents – Joao Cancelo and Alexander Zinchenko.

Hector Bellerin and Kieran Tierney both completed crosses into the 18-yard box, while Granit Xhaka led Arsenal in passes into the penalty area (3) – that should go some way in explaining their possession value from an afternoon that gave little in terms of attack. 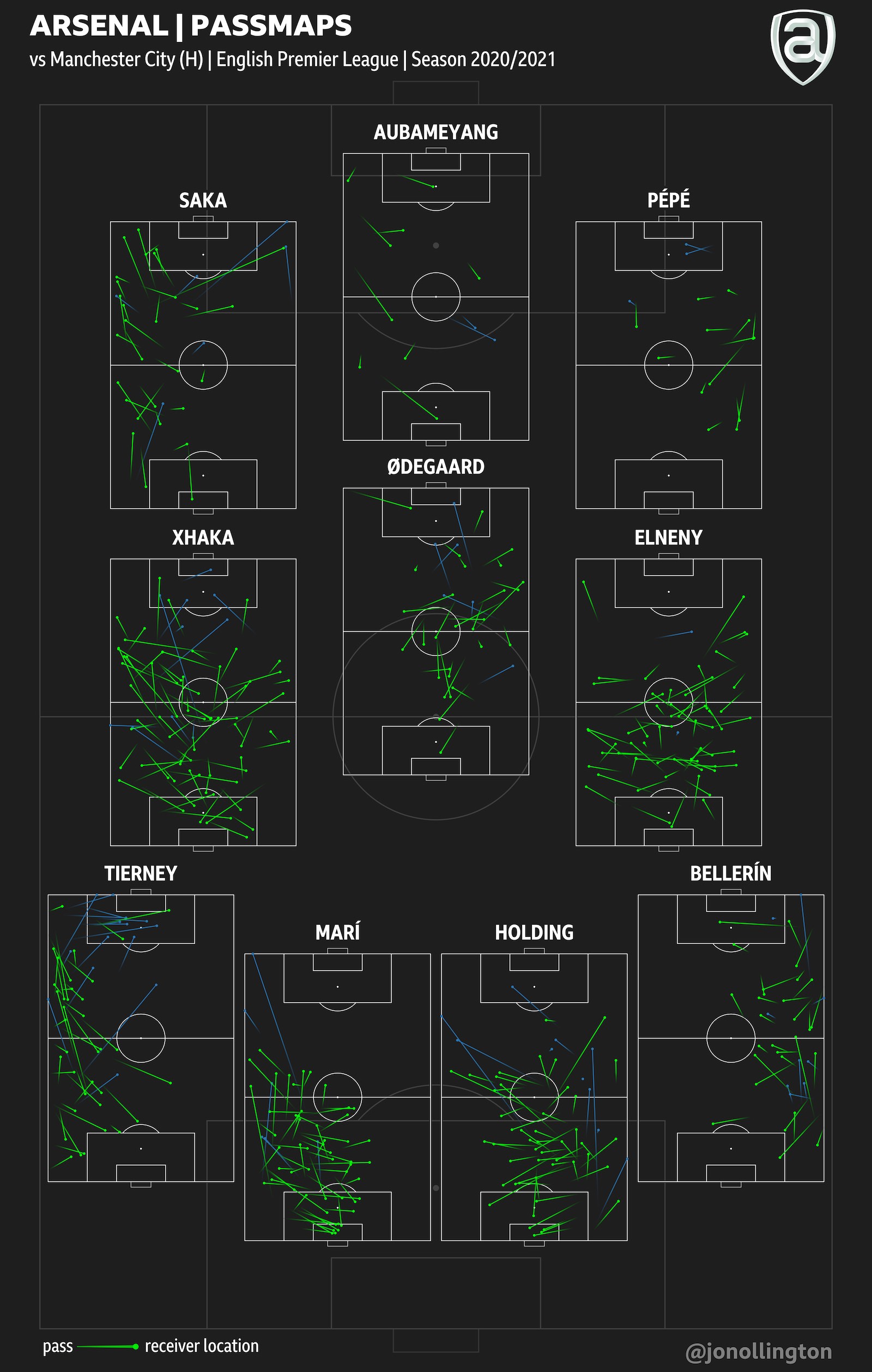 Above are individual passmaps for Arsenal’s starting XI – green are successful – blue are unsuccessful.

Mohamed Elneny completed 61 of his 63 passes but often turned his back on players in space ahead of him, opting to go backwards. In contrast, Granit Xhaka grew into Sunday’s encounter – he led Arsenal in total passes (65/73) and completed more progressive passes than any of his teammates (5).

A 1-0 defeat against the runaway League Leaders is by no means terrible – but against Manchester City, you need to be able to defend well as a team and be able to build up play consistently in order to prevent them from pinning you back. After those initial seven minutes, Arsenal did well in this regard, but didn’t have enough to threaten offensively.

With all eyes on Thursday’s second-leg against Benfica, the hope is the Gunners can create more against a defence not nearly as strong as Pep Guardiola’s.

I can’t knock Elneny for effort, but his tendency to play it safe all the time can be so frustrating.

Exactly. Elneny is great to see out a game or keep the ball in a game where we might expect to have less of the ball (like City of course), but when you’re 1-0 down after 2 mins, he is a bit of a liability to get you back into a game so his usefulness is near gone after that.

You’re right. The more cynical among us (hardly anyone, I’m sure) would say that if he’s brought on “to control a lead” then he won’t get much more football this season the way we’re playing.

The games he has been a bit more adventurous are the ones he has played better in. Gotta wonder what his instructions are though.

It’s a very weird one as when he first joined I remember him head down charging forwards and trying to shoot from everywhere. Maybe it’s a lack of confidence in his relative ability compared to the rest of the team?

Against one of the best pressing teams in the world he had 93% pass completion. I think that and his work rate and pass availability justified his inclusion. Might a different player have increased our potency? Probably but would we have been able to keep the ball as long as we were or would we be booting it long more often becuase we lacked the availability and security on the ball Elneny gave us? Also probably.

Well, Elneny had the option to either drive the ball forward, or play safe.
With Odeegard far right, Saka n Auba on the left patch, meanwhile the opposition pressing in; Mikel needs some more of swagger and less of leggo

Can anyone explain which successful passes count as increasing the chance of scoring vs decreasing? (Referring to the third graphic down the page.)

Interested that Aubameyang (for example) seems to have a high proportion of passes that increase chance of scoring, yet the fourth graphic down shows all but one of his passes were backwards.

Put simply; Possession Value looks at the area/zone passes are made and what area/zone of the pitch they finish and quantify the result – establishing the probability of a team scoring from an individual possession.

The calculations are worked out via a static grid. It’s by no means perfect and should always be taken into context.

I’ll figure out a way of adding a permanent shortened description going forward.

Ah that’s interesting, thanks for the explanation.

These articles are great Jon, I’ve been really enjoying them – cheers.

With regards to Aubameyang – in context of what Arsenal produced going forward – his cutback to the penalty spot was one of the highest possession value passes on the day.

As the article grows, I’m aiming to focus more on individuals who stood out and provide more in-depth analysis.

Thanks for the feedback – really good question! it’s impossible to improve without.