Arsenal 3-2 Benfica: By the visuals

Arsenal are through to the last 16 of the Europa League, after Bakayo Saka’s delightful cross was nodded home by Pierre-Emerick Aubameyang in the dying minutes of a tie that the Gunners almost contrived to lose.

Mikel Arteta sprung no surprises with his line-up and opted for the same 11 who were unlucky to leave Rome with a draw last week – minus Cedric Soares who made way for the fit again Kieran Tierney. 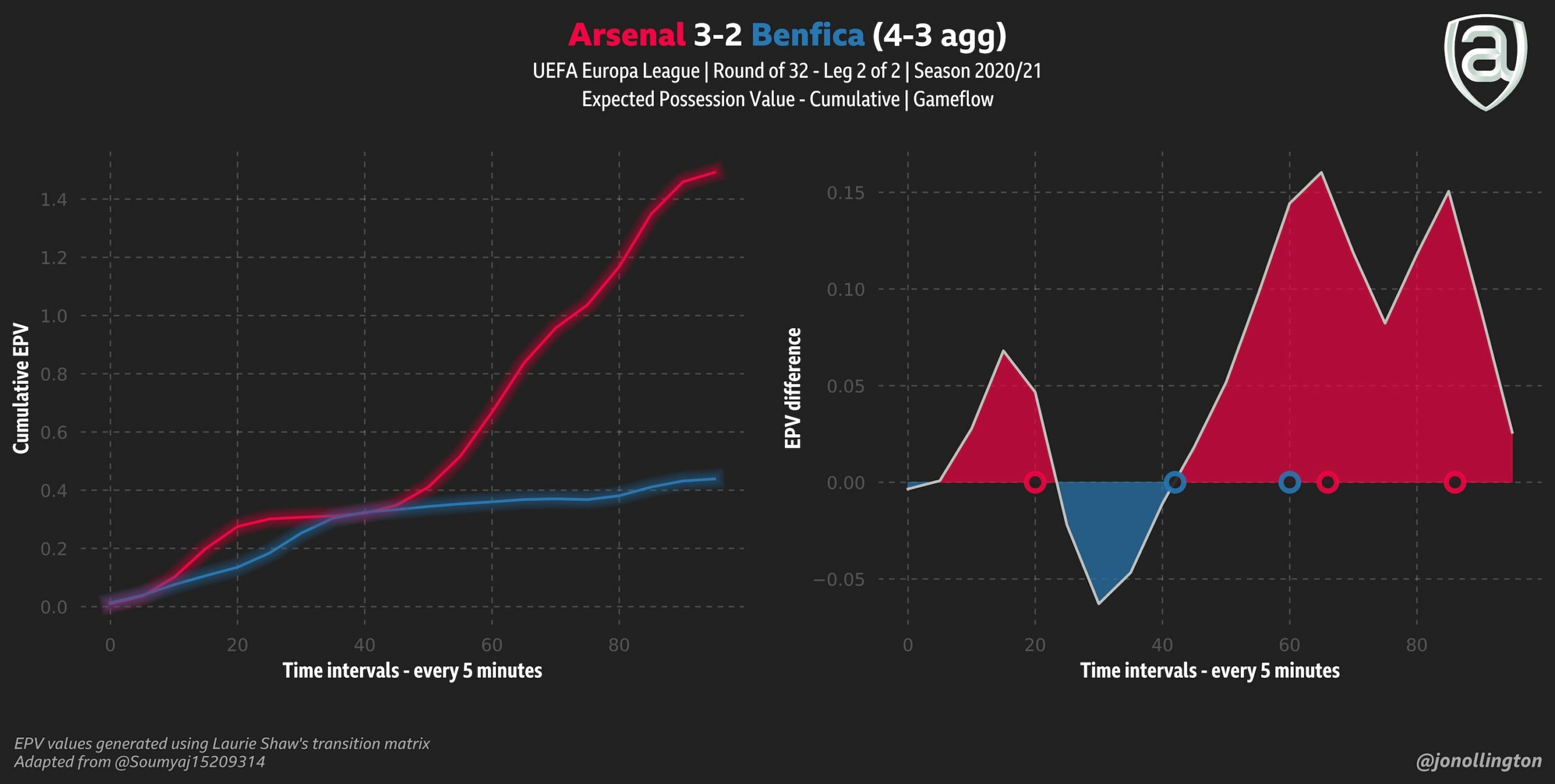 The opening exchanges saw Benfica drop deep – allowing little space on either flank as the ‘home’ team enjoyed the majority of possession. Around 20 minutes in, an incisive Bukayo Saka pass found Aubameyang, who dinked over goalkeeping Helton as Arsenal took a deserved lead.

As depicted above in the possession value plots, Benfica enjoyed their best spell of the match after falling behind and levelled just before half-time. Dani Ceballos needlessly fouled Julian Weigl on the edge of the area and Diogo Goncalves curled the resulting free-kick into the top corner.

On the hour mark, and completely against the run of play, Ceballos was again at fault as his attempted header back to Bernd Leno let Rafa Silva steal in and pass the ball into an empty net. Shortly afterwards, substitute Willian left Kieran Tierney with plenty to do before he drove the ball low into the bottom corner and gave the Arsenal belief they needed ahead of Aubameyang’s late winner. 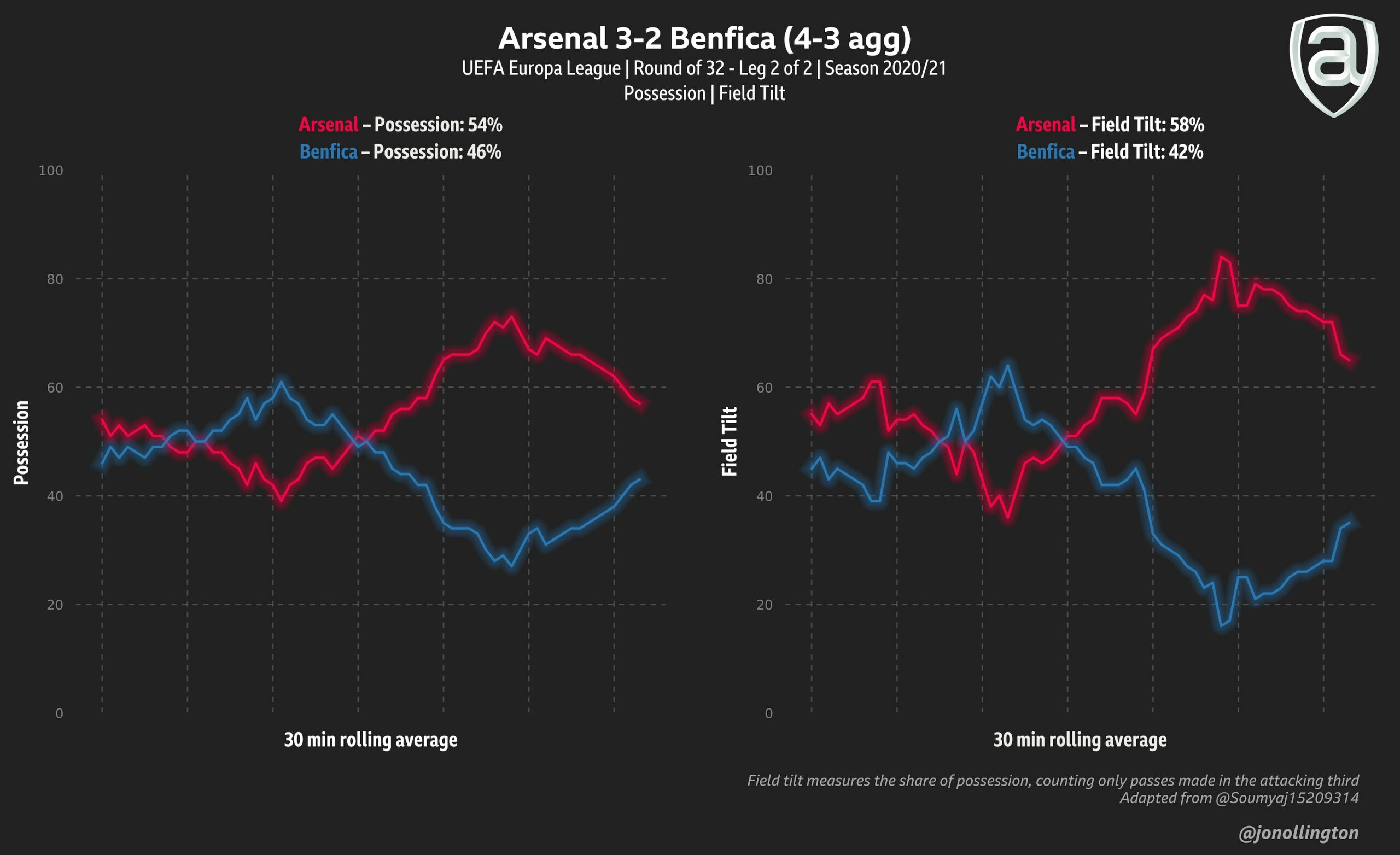 Arsenal had more possession and sustained threat in the final-third as shown in the above plots, but the game was played at a ponderous pace and The Gunners only accrued 10 shots – with just 4 of those coming after Tierney’s equaliser.

Before the arrival of Martin Odegaard, Emile Smith Rowe played through the middle and gave a different dynamic to this Arsenal side as he injected urgency into the attack. The Hale-End graduate isn’t having nearly the same effect out wide and was replaced after a difficult 63 minutes.

When questioned, Mikel Arteta said he opted to bring on Willian instead of Pepe or Gabriel Martinelli because of the lack of space and the need for special quality in tight areas. Somehow, his decision was vindicated when the Brazilian attacked the left half space and broke Benfica’s compact shape which in turn led to the equaliser. 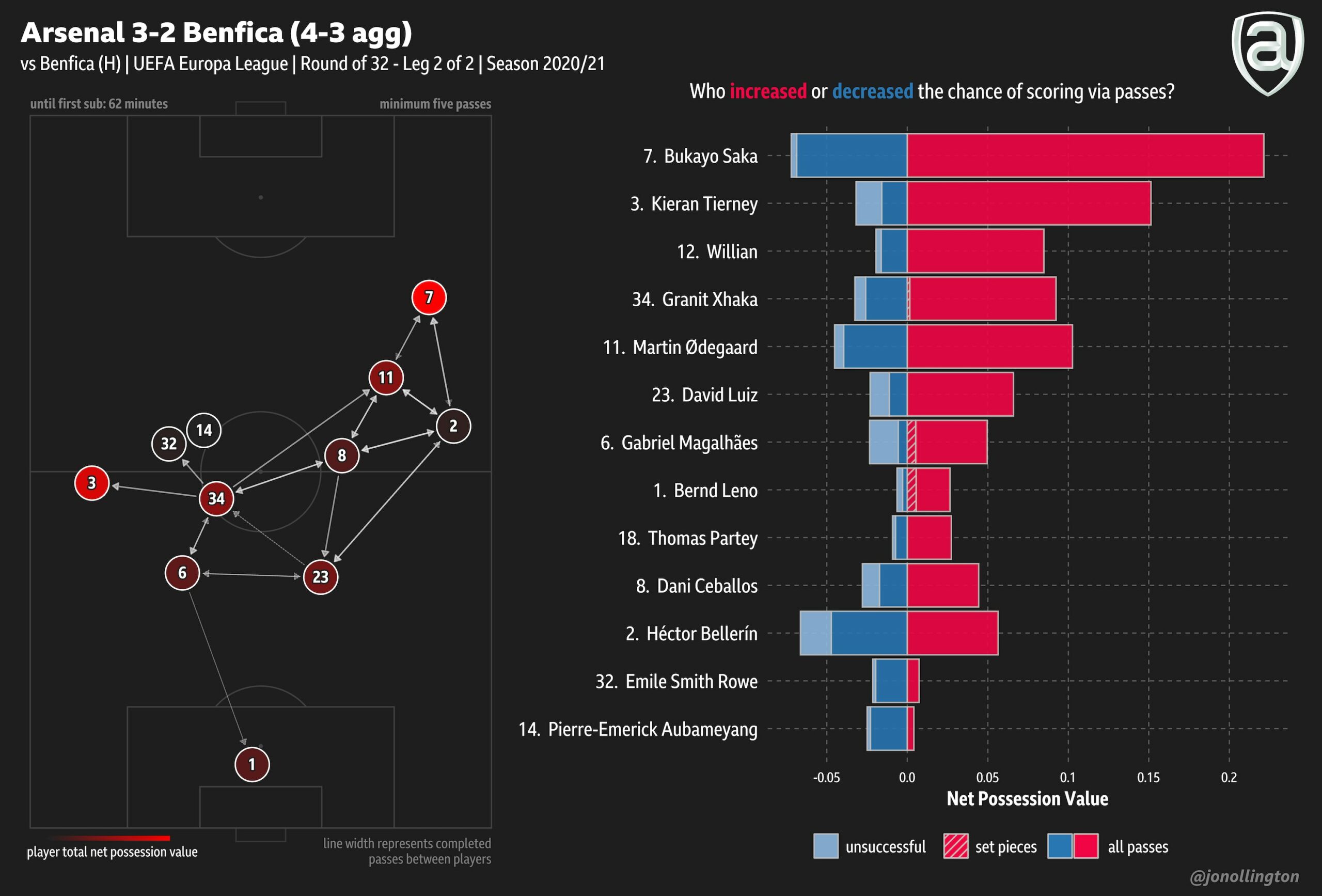 Above is the pass and position network until the first sub at 62 minutes and individual net possession value ratings from Thursday’s Europa League encounter.

Kieran Tierney delivered 12 of Arsenal’s 22 crosses as the Gunners tried to get the ball into the area against opposition who refused to vacate it. However, it was Saka’s second and last cross of the evening that produced the winner – after another match winning performance that saw him add 2 more assists to his tally in what is turning out to be an incredible season.

Willian completed 3 passes into the opposition area (tied 1st with Tierney) despite only playing 30 minutes in a decent performance, probably his best since the opening game against Fulham. 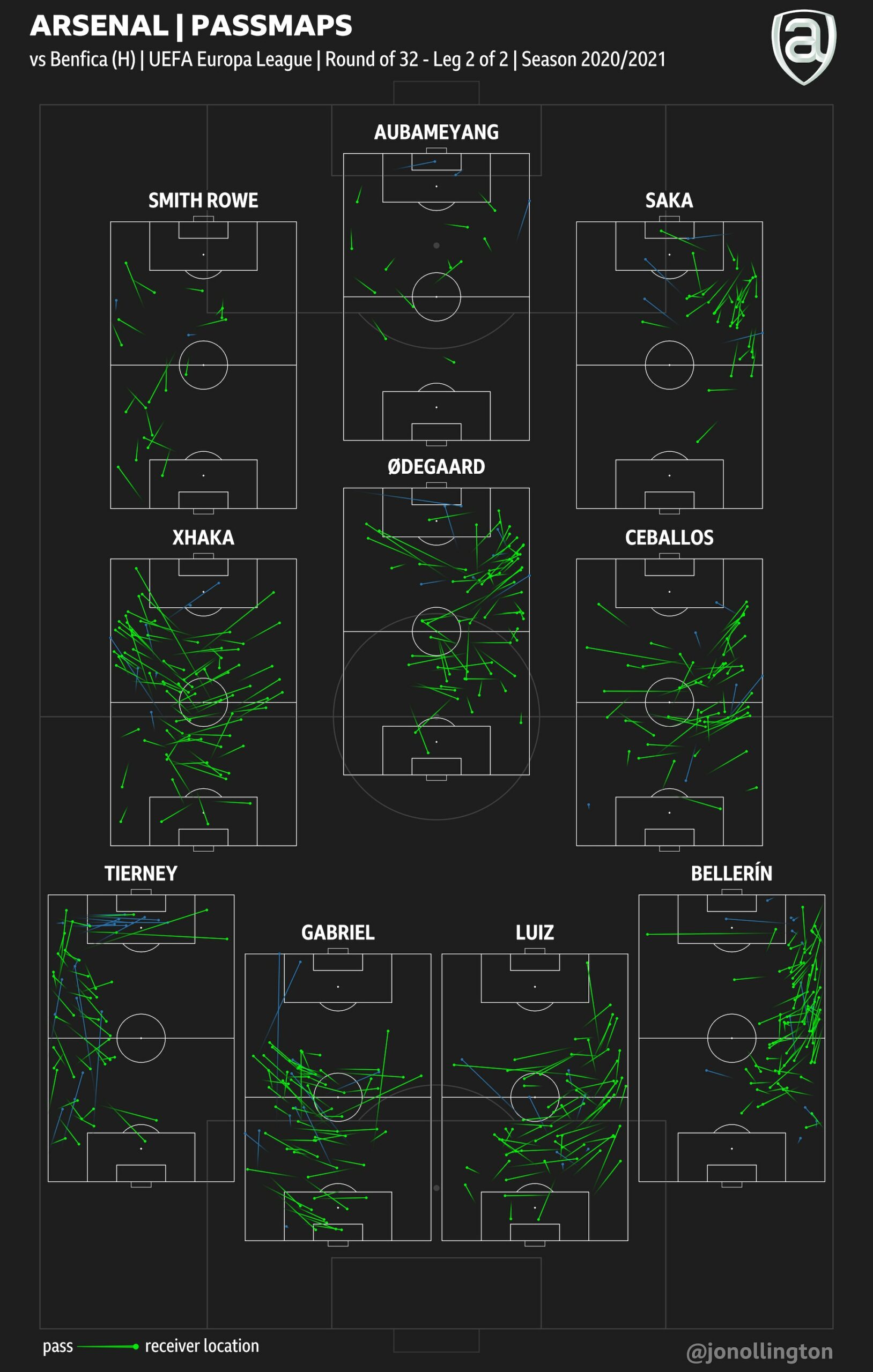 Hector Bellerin led Arsenal in passes (75/89) but with just 3 crosses and 1 successful penalty area entry. Granit Xhaka (77/83) and Martin Odegaard (66/74) tried their best to dictate play and find space against a stubborn low block, with the former playing more progressive passes (6) than any of his teammates.

However, Arsenal’s build up play was too slow and passive and there were countless times when the opposition were allowed to get back into a defensive shape as a result. It improved slightly after the introduction of Thomas Partey – who ranked 2nd for passes into the final third (7) – but this is an Arsenal side who desperately needed to up their tempo in the final third as they chased a potentially season defining goal.

With that said, it was great to see the club-captain produce not only a performance that saw him score twice, but his movement through the middle looked sharp throughout and had he not been a hair’s width offside, Aubameyang might have been celebrating a second hat-trick in less than a few weeks.

That’s all from me. Next up is a trip to the King Power and the chance to avenge an undeserved loss from earlier in the season against Brendan Rodgers’ Leicester City.

If ever there was evidence to get ESR back in the middle……….!

Absolutely. Let’s hope that Partey’s return and his capacity to carry the ball frees up space for our wingers and that Arteta will feel more comfortable playing Pepe or Martinelli on one wing. At the moment it seems like his preference is to have three of the front four be players who are comfortable operating in small spaces, meaning that whenever Auba starts through the middle, Pepe and Martinelli are starting on the bench. I hope we get to see Pepe-ESR-Saka as the first choice three around the striker even with Auba starting. with Martinelli and Odegaard as impact substitutes… Read more »

Yeah the point of signing Odegaard was to be able to rotate him with Saka and ESR without too big a performance dropoff in any combination, so they could reach the season end without burnout. Instead they’re playing just as much, ESR is shifted to LW where he’s not as suited, and ODG isn’t having the same impact ESR was at CAM. We’ve got Pepe who showed promise on the left, Martinelli who needs game time, and Auba who IMO is better on the left vs the majority of teams I don’t understand Arteta, half his decisions make sense, the… Read more »

I think, it won’t be a bad idea to have two line ups [Laca, Pepe, Odegaard, Martinelli] and the other [Auba, Saka, ESR, Willian]. It would make it possible to have partnerships in the group as well as having them rested. I am really getting worried for Saka. He is playing too much for the team and this is looking like the breakthrough season of Wilshere when he was carrying us in most of the matches. We need to give Saka a break.

And how do you know `the point of signing Odegaard was to be able to rotate him with Saka and ESR’? Maybe the point of signing Odegaard was that Smith Rowe is a player of enormous potential but, unlike Saka, he has not yet shown he can consistently play an important role in every game. I think Odegaard, especially if Partey is in the team, plays exactly the way we have been looking for.

Would love to see ESR in the middle. First choice midfield of ESR + MO + Partey when fit. Rotate with Xhaka to keep all fresh. Ceballos as a late sub if we ever get ahead in a match, or as a starter against bottom table team.

I’m sure that’s too attacking for Arteta, but a guy can dream.

Let’s hope we can go on another good run. Leicester were dodgy last night so hope they continue that.

Absolutely. We need to try and build on the Benfica result to re-start our PL form (yet again!). We’ve made very little real progress in the PL for quite a while now and need to get into an automatic EL qualifying place if possible. Putting all our European-qualifying eggs into this season’s EL “basket” remains very risky in my opinion.

we arent going to qualify for europe via the league.

Murphy was an Arsenal Fan
Reply to  ilikecheese

Even then I would be happy to celebrate St. Totteringham’s Day his year. And it is a distinct possibility.

Thing is we were robbed or mugged at wolves and that impacted on the villa game!! Win those two games, which I think we would have done had it not been for naff refereeing, then all of a sudden 4th spot looks do-able!!! I do think we need to utilise Martinelli, Pepe & Laca a lot more

Auba’s pass map looks like me leaving a bar and deciding there is a room for one more.

‘Granit Xhaka … playing more progressive passes (6) than any of his teammates.’

But Arsenal Twitter said Xhaka only passed sideways and backwards?

He plays more forward passes because hes deep and recieves almost all the balls from the centre backs. He should be recieving the ball and moving it on quickly setting the pace for the team. unfortunately he is very slow on the ball and one footed so takes an age to pick his passes or gets closed down and goes backwards.

Timorous Me
Reply to  Dave

I don’t know if it’s because his return from suspension coincided with ESR being inserted into the starting XI, or if Xhaka took it upon himself to focus more on progressive passing as Arteta seemed to want out of him, but since then he’s really looked like a new, much more positive player for the most part. And it’s especially noticeable when he’s partnered with Partey.

I’d love to see a statistical breakdown of a before/after for Xhaka to see if there is something to this.

Xhaka is a Deep-lying playmaker. Playmaker is as good as the rest of the team, if the guys in the advanced positions don’t make off the ball moves and make themselves available for the ball. The playmaker will try to play safe or punt it forward. Xhaka likes to keep possession thus he played it back.

With players making the runs and making space, Xhaka is able to pass it forward. Remember not long ago, we were playing mostly around our penalty area.