Zinchenko: We need to improve a couple of things

It is really nice to see Arsenal get back to winning ways.

I don’t think that the results of the last few matches came close to matching the performances that Arsenal has put in and it is a nice change for the result to match how Arsenal has played. 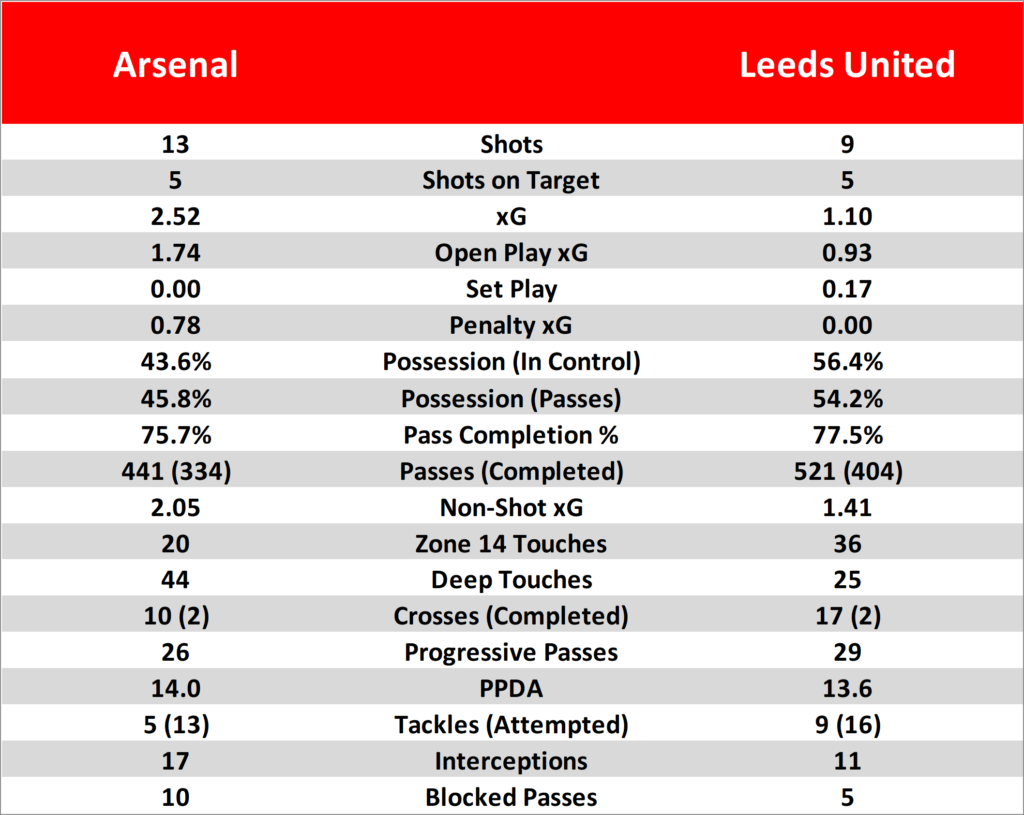 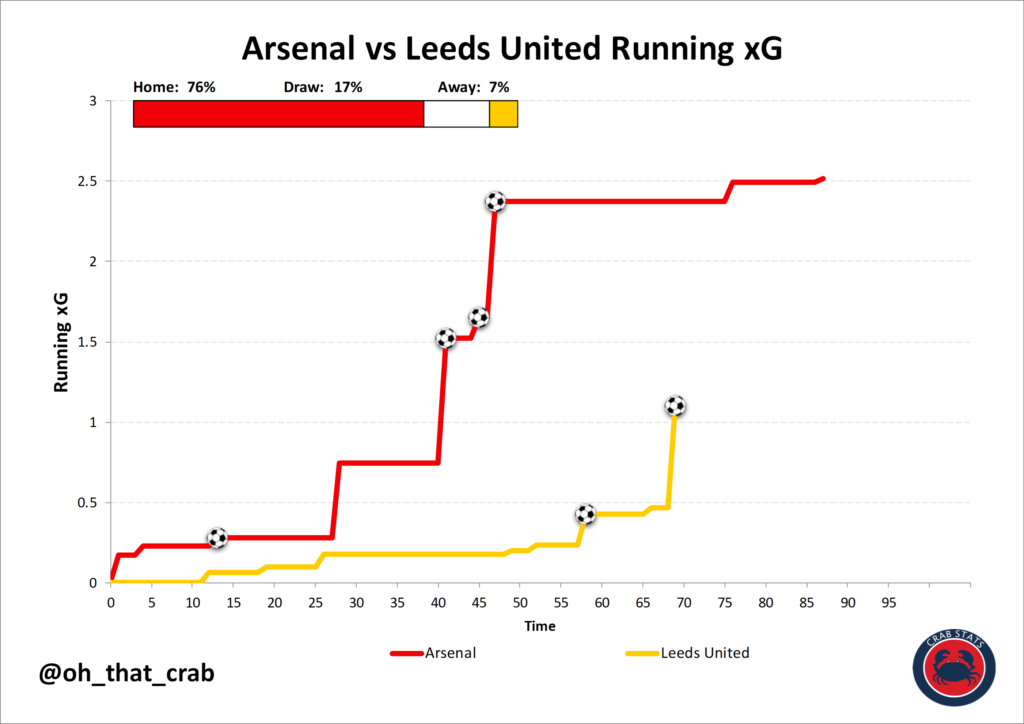 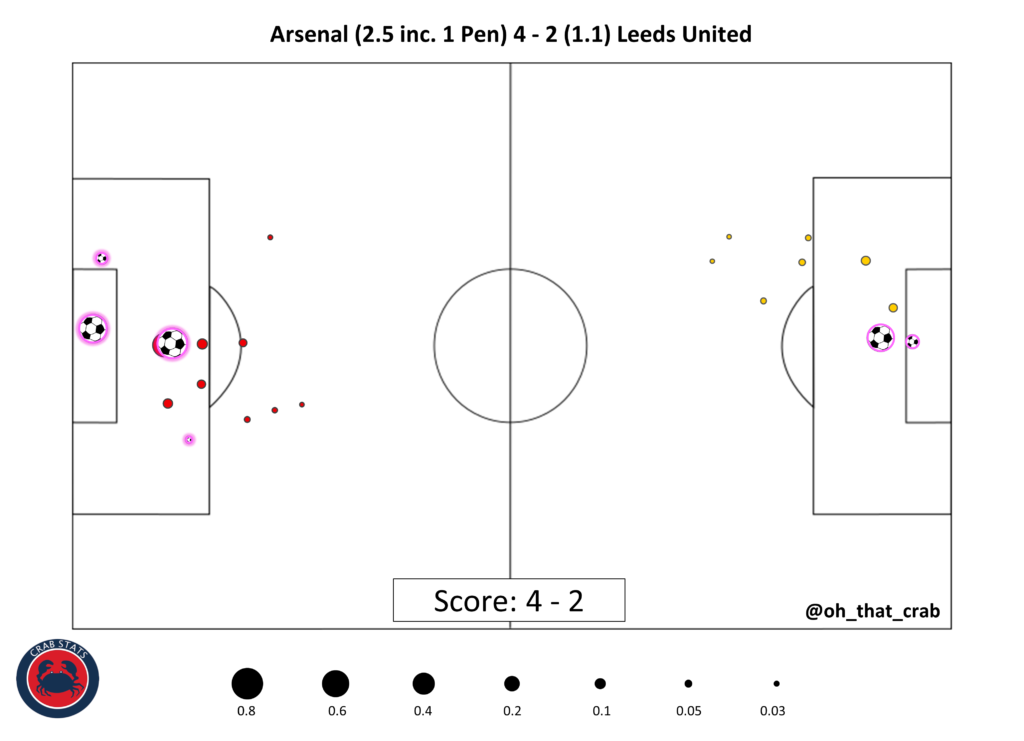 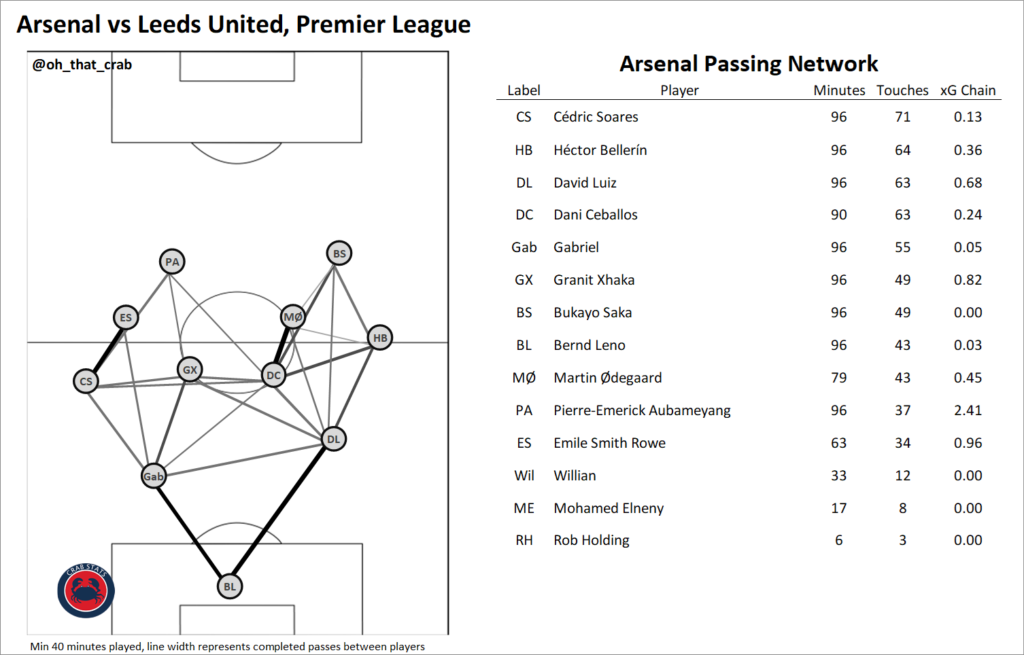 This was a good match for Arsenal, who were very deserving of their victory. This match was a continuation of Arsenal looking competent or maybe even better than that in attack, while also continuing to play well in defense. In the second half things got a little closer statistically but this was still a match where Arsenal was far and away the better team. 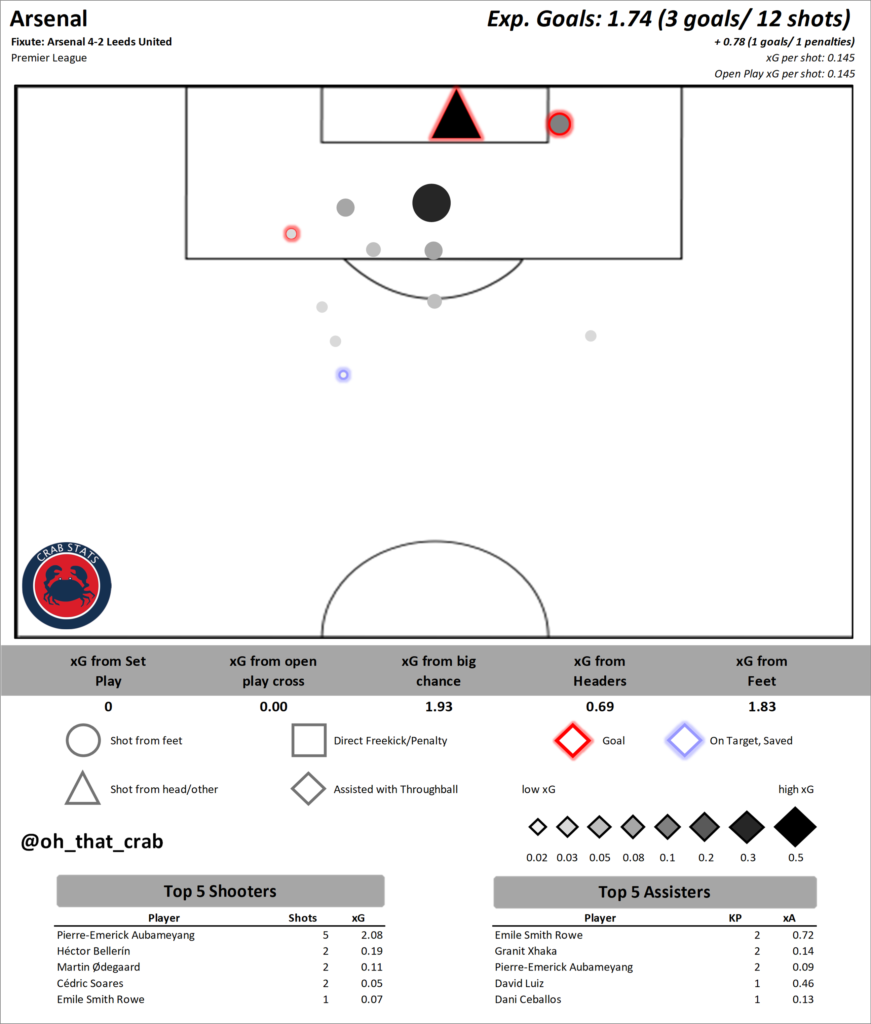 An interesting note for me from this match was the change in strategy from Arsenal with regards to playing long. In the first half, Arsenal played short often (with the ball moving much faster between players from my watching) than they have typically this season. On average Arsenal have played long passes 18.5% this season, in the first half that number was just 11%.

This quick passing also left openings for Arsenal to carry the ball forward after breaking the man-oriented pressing of Leeds. With Arsenal averaging the 5th highest average total yardage per carry in this match.

0 – Passes completed in the penalty area

Looking at these stats it is pretty easy to miss the importance to Arsenal that Saka brings. Saka didn’t do a lot with his passing or shooting but his gravity in this match was very high. In this match, he used his ability to carry the ball to great effect. He was fouled 5 times (6 if you count the time he was fouled in the box but had the penalty overturned by VAR) by Leeds. He led Arsenal in touches in the attacking third touches with 24, he led Arsenal in successful dribbles with 5, and also led Arsenal in shot-creating actions with 4.

I think that this match really highlights what he brings to the table for Arsenal. He didn’t do anything spectacular passing the ball, or get on the ends of a lot of actions to produce gaudy shot numbers. Instead, he was an effective outlet for Arsenal to bypass the Leeds press, who turned into a nightmare for the Leeds defenders every time he received the ball and ran at them.

Zinchenko: We need to improve a couple...

Jesus reflects on the good and bad...

Yes, saka is a beast

Var Will Solve The Problem
Reply to  Powerzan

Hope he starts on the bench against Benfica. Need him fresh against the City. I also liked how calm he is. There were several occasions where Alioski tried to wind him up by being passively aggressive or being rough. Saka completely igonred him. And loved how Alioski took the “walk of shame” in front of Pepe after being subbed so early for being useless!

Rich
Reply to  Var Will Solve The Problem

We should 100% rest players against Benfica ………….Leno …….Holding Mari Chambers…….Cottrell …..Ceballos Elneny Pepe Odegaard Willian ………Lacazette Plenty of experience, take a strong bench, we’ve always got the second leg if need be I’d put in Soares at left back, providing Tierney will be fit for City We can’t run Saka, Smith-Rose and our full backs into the ground, there’s a lot of games, Thursday should be a chance to rotate, and give other players an opportunity to stake a claim Arteta needs to learn from rushing Partey back against Spurs, and starting him 4 times in 12 days coming… Read more »

Public Elneny
Reply to  Var Will Solve The Problem

Benfica vs us is quite a tight matchup – resting key players could swing it significantly in their favour. We’re already without Tierney and Partey most likely

Man City will still be big favorites against us even if we select our strongest xi. And a loss vs them is less damaging to our season than a loss vs Benfica

I’m not sure about prioritising the Europa League in general but, although anything is possible, we are not likely to get a result against Man City the way they are playing. It makes no sense to rest players so they are fit for City if it means *any* lowering of our chances in any other match.

We’re not favourites against City

But if we get out best 11 out, and rest a few Thursday night

We’re definitely capable of getting a result

This team fresh, can cause any team serious issues

The emergence of Smith-Rowe, the loan of Odegaard, and the progression of Saka, will transform us as an attacking unit

Get Partey + Tierney back?

And we can beat City

If we can keep key players fit, there’s real signs that the second half of the season, will be much more exciting than the first

I certainly don’t think we should prioritise either competition. We need to finish as high as possible as well we hopefully having success in the Europa League

Interesting re long passes being significantly less in the 1st half than our season average. When watching it felt like Luiz was going long pretty much every time he got it. My eyes (and probably memory) deceived yet again

Maddenly and unnecessarily giving them the ball back. It wasn’t like he played it long when we had a really good chance to counter or someone free for a switch of play. He just speculatively hoofed it inviting pressure back on us.

Can you do a stats comparison for Willian and Martinelli for this match?

Martinelli got a higher figure on expected goals.

Also, his cheering on the team from the sideline was a bigger help than Willian appearing on the pitch.

On the last graph expected goals why the penalty is annotated as circle and not square as described in the legend?

It’s not including the penalty in the graphic. That’s the shot Auba took after Luiz’s cutback.

The passing network shows an amazing symmetry! This looks designed and finally with players that fit the role. It looks like a double headed spear with Auba Saka upfront and 2 supporting triangles behind them with players that actually can be supporting. ESR and Ødegård can play in the same team!

You could actually call that a 2-4-2-2 formation

Exactly. It also struck me the frequency of passing between the pair of “Dani and MØ” on the right and “Cedric and ESR” on the left. Plenty of vertical passing to break the lines and connect to Auba and Saka.

Sometimes stats can be misleading if u miss the match.

That is one of the best match this season, behind Chelsea (H) and Man U (A)

Surely the 18-yard area includes everything within 15-yards and is therefore the larger data set?

sides…15 yards from goalpost on each side?

Long balls tend to occur more when a team is under pressure, hence more second half. This second half pressure has often resulted from red cards, but does show we are not so good at managing a lead.

@Scott: in the last picture, why is the penalty shot shown as a circle? Shouldn’t it be a square?

Your compilation of the stats for Saka was really wonderful. Because it shows how much the stats can mislead you as well. There were alot of games where the stats would suggest that certain was the best on the pitch but reality was not the same. Both Saka and Emile seem to be more like Liam Brady type of players. Good when dribbling and shooting. Long way for them to reach those levels but would be great if they both would do it at Arsenal. But I am worried about the day we give these guys the money and then… Read more »

Zinchenko: We need to improve a couple of things