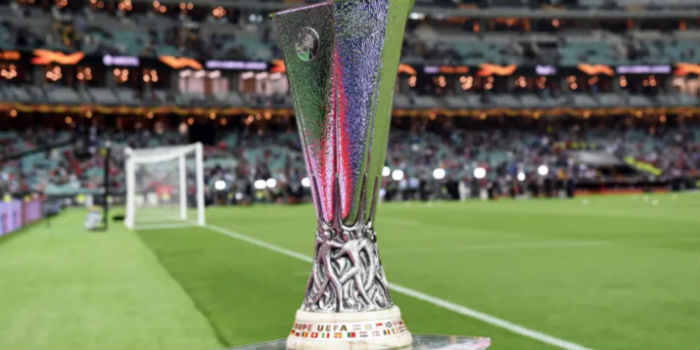 Uefa have confirmed that Arsenal’s last-32 Europa League double-header with Benfica will be played in Italy and Greece due to Covid-19 travel restrictions.

Benfica will be the home side for the first leg at Rome’s Stadio Olimpico. The match will be played on 18 February at 8pm.

The Gunners will then ‘host’ the second leg in Athens at Olympiacos’ Georgios Karaiskakis Stadium on 25 February. A kick-off time is yet to be confirmed.

Obviously, it’s sort of amusing that even when Arsenal aren’t drawn against Olympiacos we still get to go and play on their patch.

So Rome and Athens, if we lose on away goals while playing on neutral territory it’ll be both comedy and tragedy.

Can we use Mkhitaryan and Sokratis on away and home fixtures respectively?

A M
Reply to  Jacques

mkhitaryan especially, he’s been brilliant since he left

Spainicus
Reply to  A M

For free… did he start that trend?

No, we did when we turned our noses up at 10M last January..another great sales decision!

On balance, I think it makes sense to have the two games. With our PL form apparently collapsing (again!), it is looking unlikely (not impossible, but unlikely) we’ll be able to get an automatic EL qualifying place via the league this season. Having two ties at least doesn’t put everything regarding possible/eventual European qualification down to a single 90 minutes, which I suggest on current form would be a tad risky. Benfica certainly won’t be easy opponents – far trickier than anything we’ve had in the campaign so far – but failure to get into Europe would be a big… Read more »

At least with two legs we have less opportunity to Arsenal* things up. *To Arsenal. VERB formal To find a method from a position of relative strength or superiority to lose the upper hand or capitulate “Arsenal, leading 5-0 at half time, made the unorthodox decision to substitute Bernd Leno for a packet of Jammy Dodgers. This in on itself was not the most bizarre action of a second half in which it became apparent that David Luiz had subtly replaced himself with a wacky waving inflatable arm flailing tube man and Mikel Arteta substituted 4 goal hero Bakayo Saka… Read more »

Everyone keeps saying that a one legged tie is better for us like it’s indisputable. Why? If we’re happy to have 2 chances at winning it then so will Benfica. To me it makes no difference. We’re just as likely to screw up a 2nd leg after 1st leg victory as we are to screw up one game. We’re also just as likely to win one game convincingly as we are over 2 legs.

Sorry, meant that everyone assumes 2 legs is better

Whoever was in charge, I think they treated elements of the fanbase like the farm’s sheep for too long. Perhaps, one day, we will all gather at the director’s box window and spy them morphing into one another and realise that nothing ever really changes.

A Different George
Reply to  BillyKrystal

The theory is that luck, or a single bad mistake, or a single moment of brilliance, can decide any match. The more matches you play, the more that will balance out and the side with greater quality ends up ahead (why we have won FA Cups, without ever challenging for the league). It’s the same reason that the better team wants a perfectly kept pitch and good weather: the less part chance plays, the more likely the better side wins.

BillyKrystal
Reply to  A Different George

That’s assuming we’re a superior team to Benfica. Oddsmakers say we aren’t, at least not in the first leg. And even without that, our unpredictability makes us equally as vulnerable whether it’s 1 or 2 games. We’ve got a good record of winning big one-off games, I maintain it’d be better for us. Not least because it’s one less fixture to play a long way from home.

Better or not, it doesn’t matter anymore. It is going to be a two legged affair, period.

In Wenger era, we used to consider these teams as cannon fodder.
At least, we have our Arsenal back.

You know, if it came to that, they should have just settled things with a bunch of FIFA games, best of eleven.

Should’ve been a one off game but then there would be less matches for TV.

should there even be european football this season? seems stupid but money talks

You make an interesting point about the away goals rule. The rule sucks at the best of times, but surely it would be an absolute travesty if any tie which has required a change in location gets settled on the away goals rule? I wonder if UEFA have looked into this?

Why would they have to play twice if there are no ‘home’ and ‘away’ legs?
UEFA will certainly stick to her rules as it doesn’t really put any side in the disadvantage.

No, they’ll only look into it afterwards and make decision for it to not happen again in future – much as playing a final in a country no-one can actually visit.

Playing twice as many ties that involve twice as much travelling at a time where travel is restricted worldwide is plain ludicrous and merely shows that EUFA is only interested in TV money to further feather its bed.

I see you have spotted the trend of any good changes happening after it doesn’t benefit Arsenal any more. I appreciated these as well:

-We spent years having to go through qualifying rounds to get into the CL when finishing 4th. The first time we finish outside of the top 4, the 4th placed team qualifies automatically.
-We couldn’t play Aubameyang in the EL because he was cup-tied. The following season, the rule is abolished.

No doubt the rules will be changed so that accidentally fouling someone doesn’t result in a red card anymore.

The Greek tragedy awaits, no doubt

I’d rather watch The Oresteia at the moment than Willian wistfully jogging around to another Arsenal defeat.

Did Willian shag your wife or something? Every single article you are posting the same thing. Get some new material.

No – but he’s royally shagged our team

How dare you write nasty things about his beloved Willian.

He misses his little Ozil lamb to lament about

Am I alone in thinking this is just an absolute farce! Didn’t we have issues with COVID after playing Olympiakos, and yet here it is a safe neutral venue.
We shouldn’t be bothering with international competition in the current climate

Just another example of the ludicrous self importance of elite football clubs. We are in a global pandemic so, I know, let’s travel across Europe not once but twice, just because we can.

Being such a forward thinking club, we’re apparently trying our best not to bother with European competitions next season too.

If Arteta plays Willian in both legs and the remaining Premiership fixtures, we certainly won’t have to worry about European football next season.

Fully expecting to be slated for this but I don’t understand why people are so adamant these games shouldn’t go ahead. Aside from the news grabbing headline of Arteta first contracting it, really think about covid’s actual impact on the sporting world. These events continue because elite level sport has massive amounts of money thrown at ‘covid safe’ protocols, probably more sophisticated measures than any other profession. Add in the fact athletes are perhaps the lowest risk group of all adults (havertz is the only example I can think of who had anything worse than a very mild or asymptomatic… Read more »

The whole concept of a neutral venue is flawed. Benfica can’t come to England because they might be exposed to new COVID variants -but we can send our players off to rub their sweaty bodies together with Benfica’s players -then return to England without any quarantine? It makes no sense.

Everything about this club is a farce these days.

I’m sure both legs will be classics.

The “home” and “away” thing is typical UEFA farce. Surely a one off winner takes all, at a neutral venue, makes more sense in these exceptional circumstances.

Away and home elsewhere but no away goal concept is a better solution.

So, just to clarify, this effectively means we’ll be scoring away goals closer to home, than we would if we were to score at ‘home’ due to being further away than when we’re actually away?

That’s a fair amount of travelling. And in the two Sunday’s following these two games, it’s matches against teams in the top three; Leicester and Man City.

There’s going to be some squad rotation needed, and this would be a good time for Willian and Ozil to score their first goals of the season for us.

“Riding along on the Christopher Wreh” – one of the classics!

The absolute unsung hero of the first Wenger double!

Glad to see I’m still in the minds of fans. I still look back on my goal at Bolton with fondness, and so does Blogs, seeing as he posted it on YouTube

It was a beIter mate. Guincamp’s loss was Arsenal’s gain.

I met christopher wreh once. He was a really nice guy. Lee Dixon was a bit of a nob

The way Willian has played, I think it’s a better chance that it’s Ozil.

Let me see if I understand this… we’re sending an English team to play in two of the most violently insane firms’ back yards?

GraeB
Reply to  Andrew B Mostovoy

Fortunately with no fans travelling

Why not play both games in the same venue? In the same week?

Think of the Covid risk reduction by a factor of about 200 (the number of individuals travelling) and the carbon footprint you’d save.

Oh yeah forgot, that might affect the “sporting integrity” of the tournament. Thanks UEFA.

Timorous Me
Reply to  Ozzie

Is Hector still planting his trees? I hope so. Better win both of these legs just in case.

Yes and what happens if Italy and/or Greece get added to the “Red list” of countries for quarantine in the same way as Portugal?

You are Mystic Meg and I claim my five pounds.
Brazilian strain now in Italy, so Italy is quite likely to be on the red list shortly.
What would be a disaster would be if such a change were to happen while the team was there…!

You reckon Mike Dean might be in charge of that too?!

What a profligate waste of money in times when ordinary people face losing their businesses and/or jobs!\
Why TWO different venues in different countries? ‘Neutral’ is neutral – play the bloody tie over two legs on a Tues/Thurs or a Fri/Sun a la Emirates Cup if you must have 2 legs. That way – teams fly into ONE city – go into the bio-bubble for 4-6 days, get it done and fly home…
This cockamamie plan is double the costs, double the time and logistical hassle – and double the infection risk to both squads.