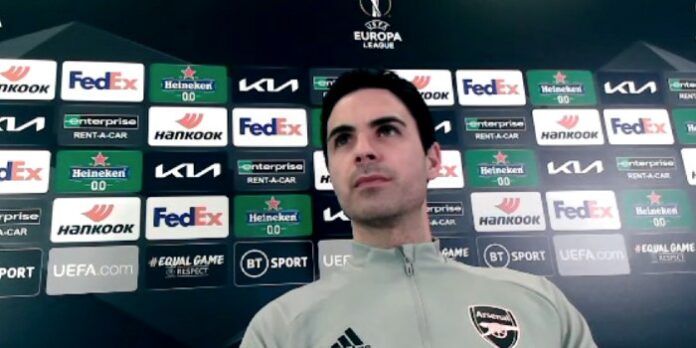 After last week’s 1-1 draw with the Portuguese giants in Rome, the sides head to Athens to slug things out with qualification for the competition’s last-16 on the line.

In light of the Gunners struggles on the domestic front – we slipped to 11th in the table last night – it looks as though this season’s continental exploits will dictate whether we’re in Europe again next season.

“It’s a big season and a really important [game] mentally and confidence-wise,” he told his pre-game press conference.

“It’s going to dictate if we’re in another competition or not for a few more weeks. This is really what we need. It’s a really tough opponent.

It’s a Champions League team who have been playing in these types of games for many years with a manager with huge experience. For us tomorrow, it’s a final.

“I always feel that it [pressure] is [on me], every time you’re playing in a competition and you can go out you know the consequences and with this club [the aim] is always to win the competition that you are in so that doesn’t really change much.”

While the boss hasn’t given up on qualifying for the Champions League via the top four – a very unlikely outcome – he knows momentum can only be built if his players are firing on all cylinders consistently.

“I think while mathematically everything is possible, in football you have to try so hard,” he said.

“We’re going to do that in the league for sure. It’s true that the Europa League gives you a completely different route and is a competition that we want to carry on playing, and try to win it.

“Tomorrow is another opportunity to make a step forward. The better we are in the Europa League, the better we’re going to be performing in the league and vice-versa. We need to be alive in both competitions.”

Arteta has already experienced a number of big-ticket games since he’s been in charge. Last season qualification for Europe came down to an against-the-odds success in the FA Cup. More recently, his players picked themselves up off the canvas to mount a winning run following a surprising Boxing Day victory against Chelsea. The boss made clear that these are the occasions that really excite.

He said: “This is why we are here! When you play in these competitions and these games, finals too, it’s the pressure that you want.

“It’s much better to have the pressure to win than the pressure not to lose. I really enjoy the pressure of winning and to be here and to represent this club you have to be prepared to do that. If not, you don’t belong here.”

I’m pleased that he is under no illusions as to how big this game is for both the club, and for himself.

Hope we can play like we did in the first leg, finish our big chances, and we’ll be fine.

Me too, but we need to be better than the last game. We missed a few chances (that happens every game), but we didn’t create that much, and their pressing game completely nulified us by the end of the match. They adjusted well to our strengths/weaknesses. They pressed us further and further up the pitch as the game went on and showed us left – we were FAR more dangerous down the right channel early and they took it away from us. By the end we were reduced to long balls and tippy tappy between Luiz, Gaby, and Xhaka. We… Read more »

You wish, Mikel. Deep down, you know next round is quarters, then semi and then final.

We’ve actually got to score from those chances though as you say. I would suggest that’s easier said than done on the evidence of much of this season so far.

It is a huge game as our chances of any European competition from a PL position – EL of course, any thoughts of a CL place through the league is borderline delusional in my opinion (sorry MA) – are getting smaller almost by the match.

Is it better to set up defensively in this one? We only need to not concede to go through, and Benfica showed very little going forward last week, benefitted from a fluke pen

If we can keep Benfica out for the first hour, they should start to take more risks at which point we can hopefully pick them apart

Problem is we can’t slip into passivity and just concede the ball and camp too deep. We need to keep possession as much as possible, just not overcommit numbers going forward or to presses high up the pitch

It’s a risky strategy, as it’s only one goal. Even riskier when we know David Luiz is going to be one of the players tasked with preserving that 1 goal advantage.

Goals are more valuable to Benfica than for us. If they score 1, we need 2 or 1 and win a shoot out. If they get 2, we need 3. I don’t know how likely it is we can score 3 or 4 even if we open up and attack well. They lack quality, but they’re switched on tactically And if Luiz is ever left as the last man, the outcome tends not to be very good for us. So we should ensure we’re fairly compact in defence to protect him, he doesn’t like large spaces Away goals are stupid,… Read more »

When a player is calamitous as Luiz your heart would always be in your mouth whenever he’s playing. Luiz took over from Mustafi. Being in a position of mathematical calculation is always not the best.

This is Arsenal’s only route to Europe next season.
I feel the EPL door was slammed shut after the last round of matches. There is no way we’ll make top 6. City, United, Liverpool, Leicester, West Ham and Everton are likely to finish above us.
We should be playing our strongest team in the EL.
COYG!!!

I wish he knew this was a final when he was making his team selection for Man City.

It’s a worry for him to consider this a final. What comes after winning this final? Certainly not silver or a CL place.

This is merely a step beyond which three other PL teams lie in wait – and they are all above us in the table. Not to mention a myriad of other European teams, many of which would regard Palace, Wolves, Villa as easy pickings but which we could not beat.

It’s relegation teams who talk of every game for the rest of the season as being finals.

I’m confident that we will win this match and go through. I’m thoroughly looking forward to this match. COYG! 🔴⚪️🔴⚪️🔴

Yes Mikel, it is a final.

Please make sure it isn’t the final straw…

“with this club [the aim] is always to win the competition“

I don’t think everyone expects Arteta to win the competition. But I do expect him to do well enough to qualify for EL places through the league! Not to be concerned about missing out.