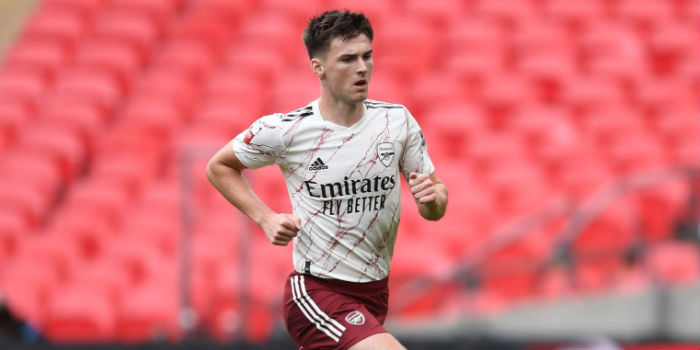 Mikel Arteta says Kieran Tierney has a better chance of being fit for Thursday’s clash with Benfica than Thomas Partey but he’s not overly optimistic about either player being available.

The Scotland international has been struggling with a lower leg problem in recent weeks and the boss also revealed on Friday that the club’s medical team are keeping close tabs on a knee issue. Partey picked up a hamstring problem a week ago in the defeat to Aston Villa and has sat out training this week.

If Tierney is going to make the trip to Italy, he’ll need to prove he’s fit in the next couple of training sessions.

“It seems unlikely at the moment, but I don’t know,” said the boss when asked if the pair might be available.

“Probably if there is one player who has got a bigger chance, it’s Kieran, because probably in the next few days he can start to do some parts with the team.

“But I don’t know how he is going to evolve when he gets a little better closer to training with the group.”

The Gunners will fly to Rome for the away leg of the last-32 knockout tie before facing Benfica seven days later in Greece.

Shame, our two best players, in many ways, we need them.

Unlikely to be there for City and Leicester too, I’m guessing.

Or the rest of the season. We’ve been here before

Still no idea how leaving out Kieran because of a pre-caution turned into missing 7 games, soon to be 8 :/

Haha! It’s funny because it’s true. I remember Wilshere gingerly strolling off the field in the Emirates cup and he didn’t play for 15 months.

From horrific leg breaks, through hideous skin grafts, to innocuous looking knocks, we are fucking brilliant at getting injured.

Not to mention in the process of that precautionary absence he has developed a knee problem ffs.

Why the fuck is an english and a portuguese club playing two games in a third and a fourth country??

Because if Arsenal fly to Portugal, they will have to quarantine for 10 days

…and Benfica aren’t allowed into the UK.

Your life must be exhausting

Much as we could do with them, it’s not worth the risk. Tierney is obviously injury-prone, but the jury is still out on Partey about that – hopefully he’s not. However, there’s little that can be done currently other than to handle their recovery very carefully and keep fingers crossed.

I wish they would take the close tabs off Tierney’s knee, They don’t seem to be helping. 🤔

We need to push without them. encouraging signs in midfield today. Ceballos, Odegaard and ESR somewhat of an overload and circumstacially Auba up top played to a forward driving more open Leeds with plenty of gaps left behind. But the interplay in midfield with short passes was sharp in first half today less so second half where for a spell we needed a bit more retention but we dropped off. Could be some players (Odegaard and Ceballos) just coming in may have dropped a little. Expect some parts of this midfield to start midweek plus likely Pepe in. Saka looks… Read more »

more important to us maybe, but i feel City still have a high importance to mikel

If we want them involved for the rest of the season we won’t rush them back and will ease them in. 15 mins first game back 30 mins second game 60 mins third game etc. As such, team for Thursday Leno Bellerin Holding Gabriel Cedric Elneny Xhaka Saka ESR Pepe Aubameyang Luiz gives the ball away too much and can have brain fart moments. I’d keep him away from knockout games if possible. Ceballos looked knackered yesterday after a good shift, he’ll need a rest. Either Odegaard or ESR should be a bench option and as Odegaard has played so… Read more »