Thursday’s 1-1 draw with Benfica in Rome ended up a frustrating night for The Arsenal who, despite playing well and creating the better chances, failed to pick up a deserved win that would have left Mikel Arteta’s team in the driving seat for next week’s second leg in Greece.

Rather surprisingly, with a fixture against the league leaders on Sunday, the manager opted to start the same eleven who did so well against Leeds United last week – and they deserved to leave Rome with more of an advantage. 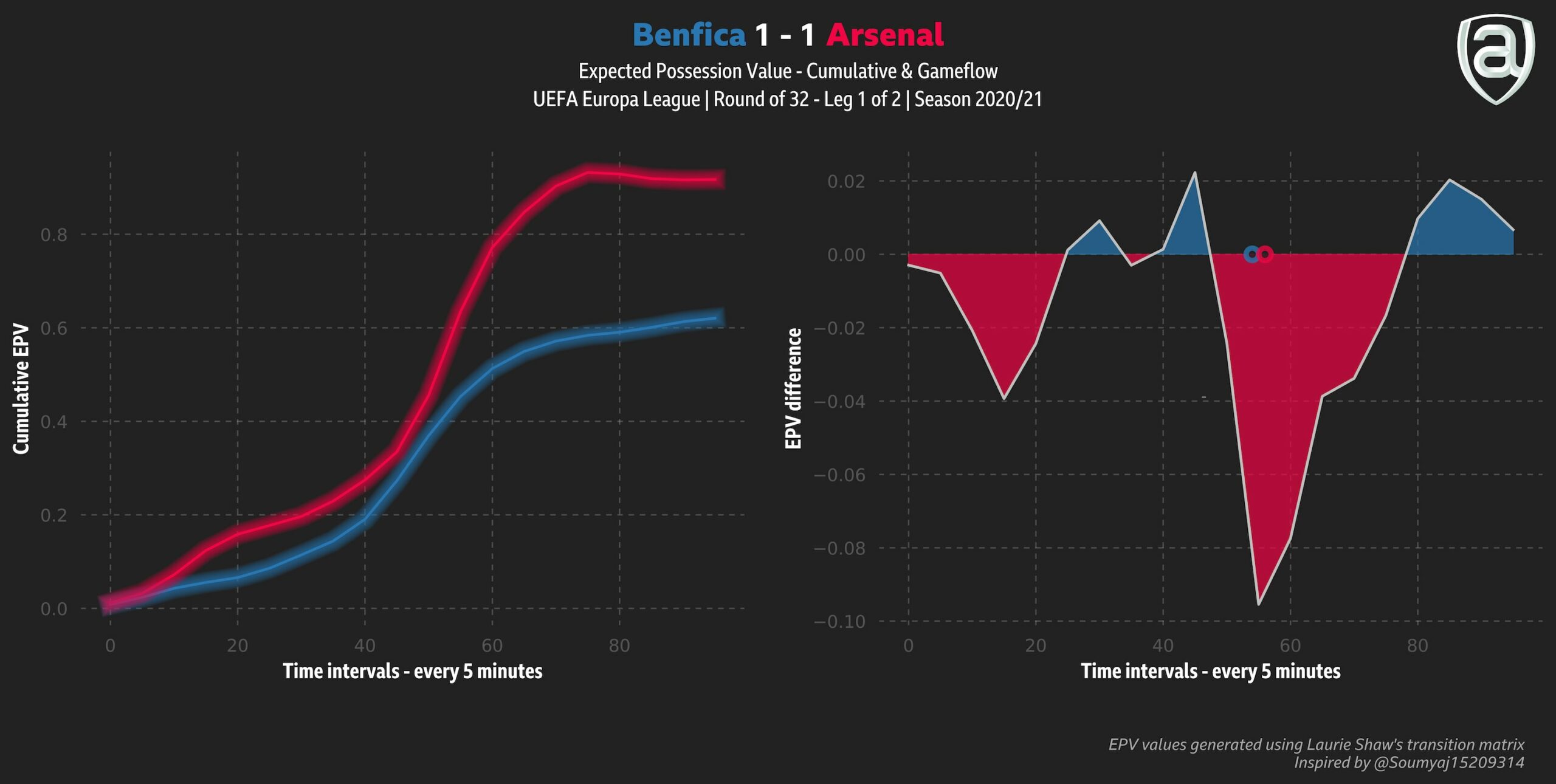 Above are the cumulative Expected Possession Value (EPV) and EPV gameflow plots that depict the probability of either team scoring from possession during yesterday’s encounter.

Arsenal dominated possession throughout and Emile Smith Rowe was unlucky to concede a penalty against the run of play early in the second half. Benfica captain Pizzi dispatched it with relative ease to put the ‘home’ side ahead.

Earlier in the match, Pierre-Emerick Aubameyang had missed a great chance after Hector Bellerin freed himself from the opposition defence and laid the ball on a plate just 7-yards out.

However, having gone behind, it took Arsenal just a couple of minutes to equalise as Martin Odegaard played an exquisite through-ball that found an onrushing Cedric in acres of space, and his square ball allowed Saka to tap home. Aubameyang missed a couple more chances before the final whistle, in what can only be described as a drab encounter, and the captain will hope his unusually wasteful night will not prove to be too costly. 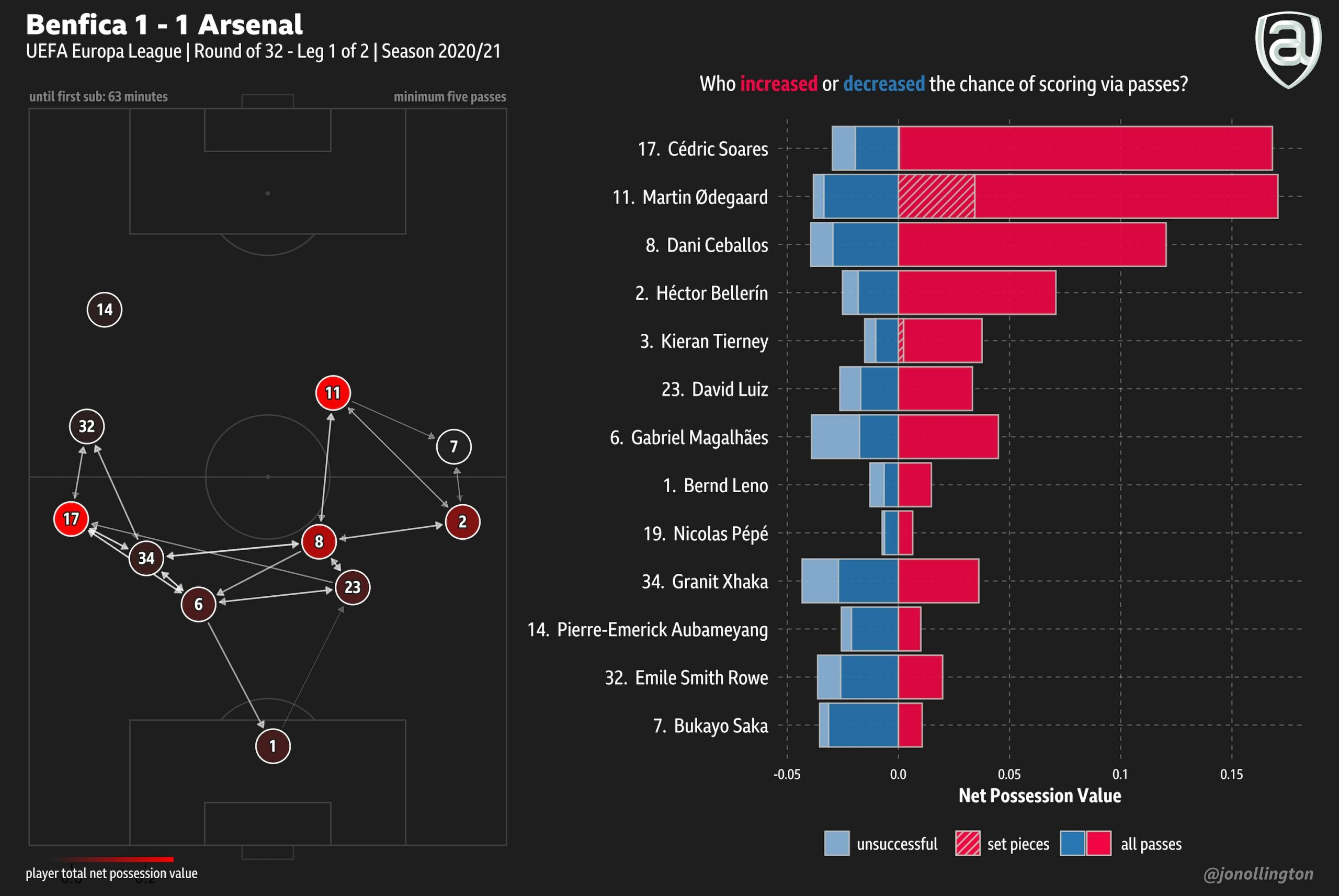 Both Martin Odegaard and Cedric Soares possession value ratings would have hugely benefited from the sequence that saw Bukayo Saka equalise on 57 minutes.

Odegaard’s vision, weight of pass and his ability to find space continually stood out as he was seemingly involved in everything that Arsenal did well last night. He led The Gunners for Shot Creating Actions (3), Shot Assists (2), was joint top for Passes into the Penalty Area (4), second in Progressive Passes (5) and joint second for Pressures (12). 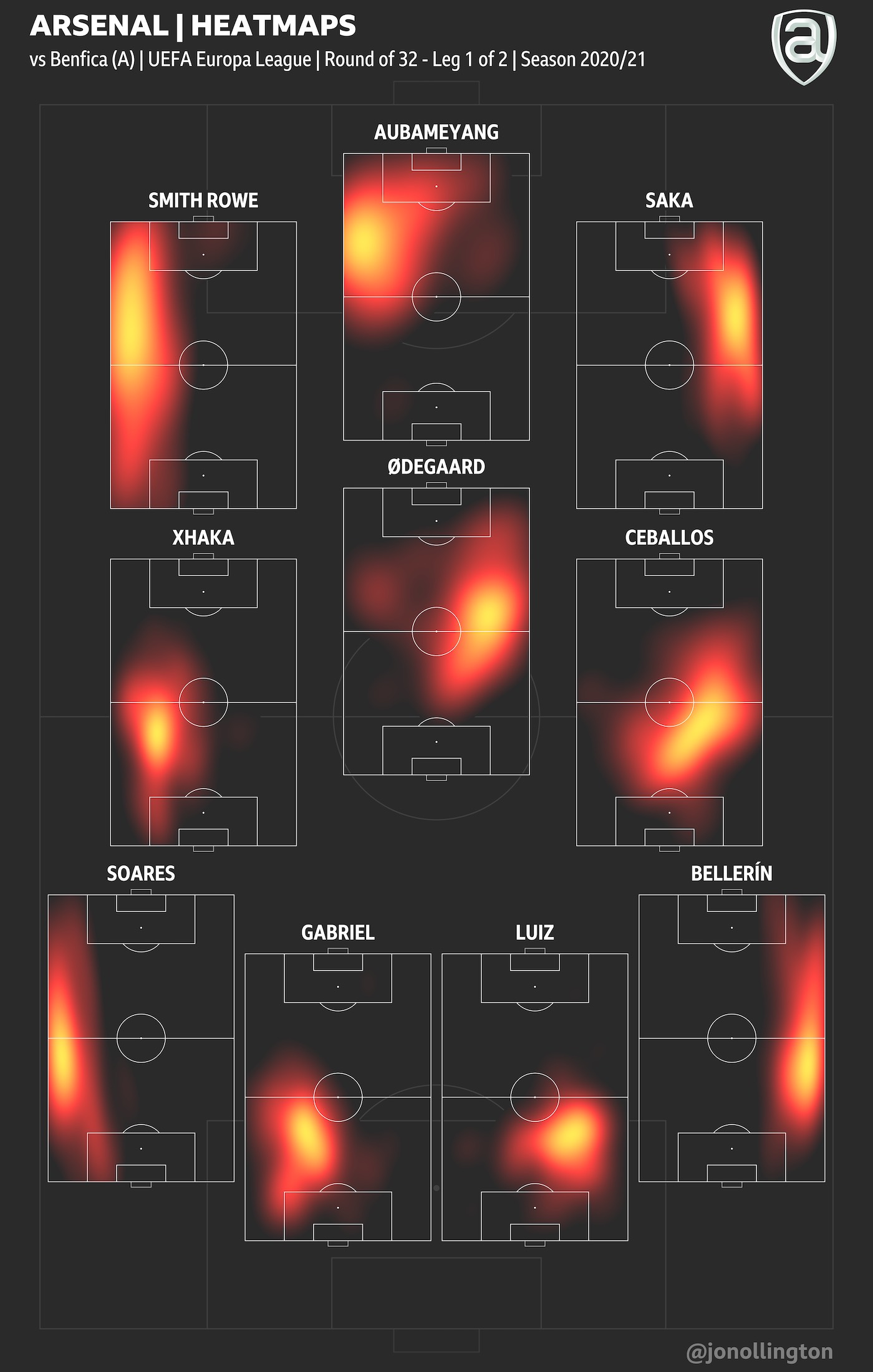 Above are heatmaps for Arsena’s starting XI that account for all open-play actions.

Emile Smith Rowe was replaced on 77 minutes by Gabriel Martinelli after he gave everything to try and produce something of note to overcome the penalty decision that went against him. It’s difficult having to judge his performance knowing he’s been shifted to the wing in order to accommodate the inclusion of Odegaard – but his off the ball movement was fantastic throughout and he’s one of the few players who genuinely speeds up our play – playing just one or two touch passes.

The heatmaps also highlight the different responsibilities between flanks with Bukayo Saka spending more and more of his time in the final third – as a result Dani Ceballos shows more of a right-hand bias covering his wing compared to left sided pivot Granit Xhaka. 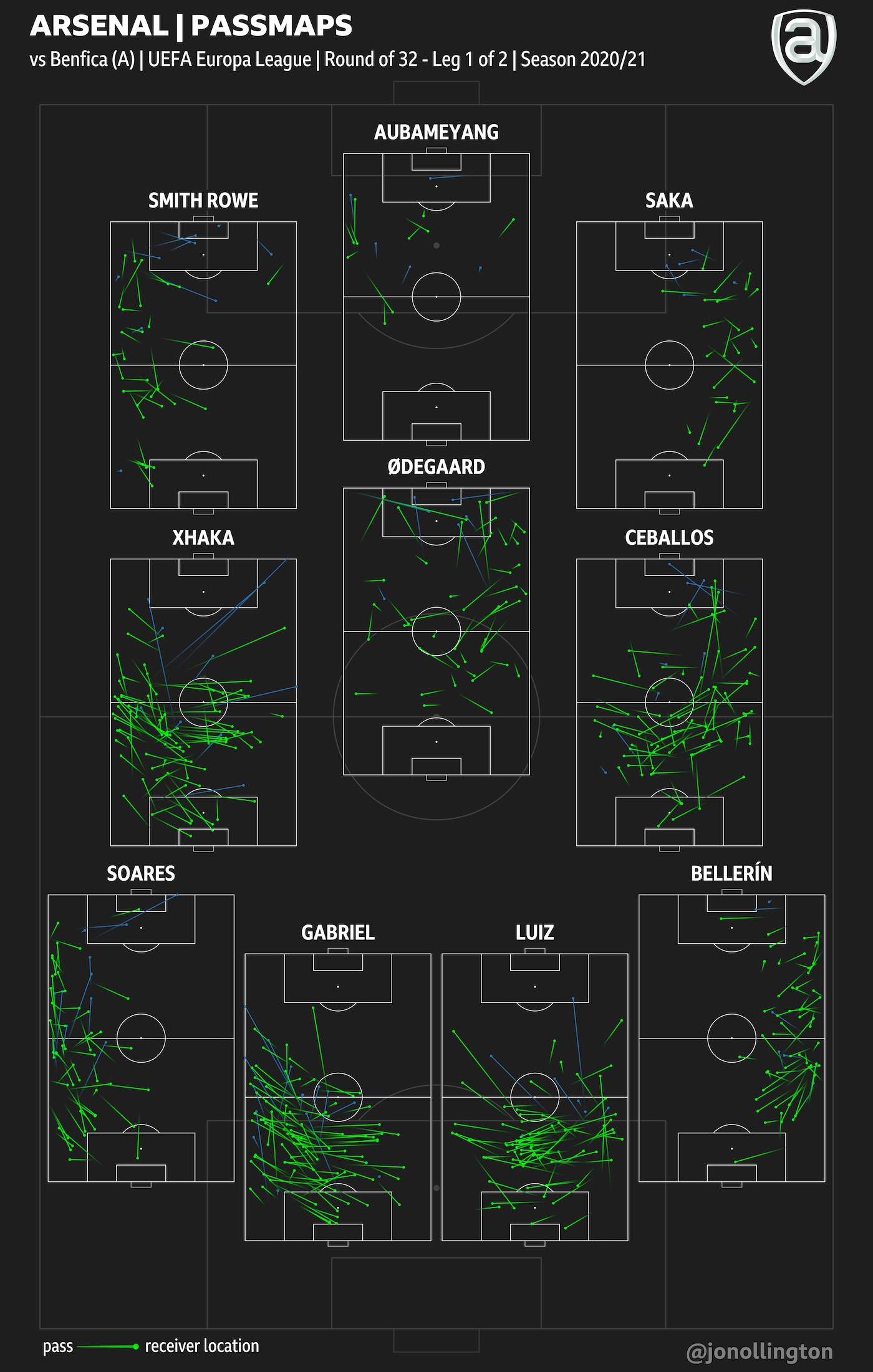 Gabriel (14/22) and Luiz (10/16) had the lion’s share of long passes (passes further than 30 yards) as Arteta clearly instructed his centre backs to find space down either wing if available. Gabriel (88/101) and Granit Xhaka (81/93) led The Gunners for all attempted/completed passes on the night, however, no Arsenal player played more progressive passes than Dani Ceballos (7).

After his hattrick on Sunday it was disappointing to see Aubameyang miss a handful of decent chances. The danger now is that the second leg will descend into the type of occasion that resulted in Arsenal’s elimination last season. However, having been more than encouraged by the quality of chances created since the switch to a 4-2-3-1, you’d assume, should The Gunners replicate that chance creation, they’d have more than enough to qualify for the next round.

That’s all from me – next up is Manchester City on Sunday when Mikel Arteta again faces his old mentor.

great visuals. is interesting to see in the heatmaps that most of our movement is down the flanks. there is no player that spends much time in the no. 10 position.

i have to say i have been super impressed with cedric in recent weeks. he looks equally comfortable both sides and is putting pressure on the place of both our first choice full backs. you could make a strong case for him being picked ahead of bellerin. don’t hear too many folks complaining about us taking him now. and on a free transfer too.

What am I looking at? Climate change?

Brilliant lol it does look like one of those maps!!!

Arteta talking about Man City like we were atoms in front of Himalaya isn’t something I appreciate. How do you tell the guys after that, you can win this game and they believe you?

Big ’em up then knock ’em down.
COYG