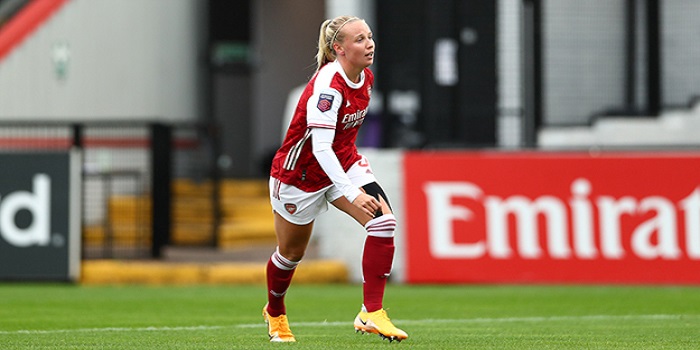 Arsenal forward Beth Mead has been recalled into the England squad for Tuesday’s friendly against Northern Ireland as a replacement for Fran Kirby, who is carrying a knock from Chelsea’s victory over Bristol City last weekend.

Mead was a surprise omission from the Lionesses squad for Tuesday’s friendly after making a starting eleven place her own under previous boss Phil Neville. England are currently being coached by interim manager Hege Riise until Dutch coach Sarina Weigman takes up the role in September. Riise will also be in charge of Team GB in this summer’s Olympics.

On Thursday evening, Danielle van de Donk, Jill Roord and Vivianne Miedema were all on target in Netherlands’ 6-1 victory over Belgium, the Dutch team play against Germany on Wednesday evening. Lisa Evans and Jen Beattie were unused subs in Scotland’s 10-0 Euro 2021 qualifying game against Cyprus- Scotland can no longer qualify for the tournament and they play again against Portugal on Tuesday. Lia Walti, Malin Gut and Noelle Maritz are part of the Swiss squad for their friendlies against France on Saturday and Tuesday.

Tim, how worried are you about what’s going on mentally with the Arsenal women’s team? I saw your tweet with the Dutch news article where DvD says she feels more free when playing for oranjeleeuwinnen and that she feels she has the trust of her teammates and the staff there. I really noticed too watching the game that she looked much more like her (old?) self than she has for Arsenal for a while now. In fact, based on her Arsenal form I was initally weirded out that Wiegman started her, then I saw her play and totally got why… Read more »

Exactly! Something is amiss not just with DvD but the whole team at the moment that we are not managing well and other teams are much better.
Good interview with Emma Hayes currently on the BBC Sport website about achieving that winning mentality. I think Joe should read it! Talk about antithesis!

Is it a coincidence that AWFC were very successful when Emma Hayes was included in the management set up?

Sarina herself is someone who doesn’t like to make a lot of changes. That’s also why Jill had to wait for so long to become a starting player. And partially it’s still due to the fact that Shanice wasn’t there. Same goes for Inessa Kaagman. Did well for Everton, now a key player at Brighton. I feel like she could be a key player for the Dutch squad as well. Sarina likes to keep her team steady and that’s why it works a lot of the time, they know each other well enough. Daan is someone who has said before… Read more »

Oh that’s a very interesting take on this, I didn’t know that about Daan vs Jill personality-wise. And yes, Sarina is really conservative with changing her team, which sometimes drives me nuts. I agree about Inessa, and about Jill taking a bit too long to get really let in. My favorite upcoming Dutch talent, Ashleigh Weerden, only got a call-up to replace someone else :/ when there’s more senior players in the Dutch squad on their way out who I think don’t always merit the call-ups and playing time they get. Though of course there is a lot to be… Read more »

It’s worked for the squad to have a steady team so I’m ok with it. I think the best addition has been Aniek Nouwen. Can’t wait for her to join a massive club and become one of our best defenders in the world possibly. She’s like Lotte. Young, but seems very experienced and solid. I’m also very curious to see how Joelle Smits is going to do at Wolfsburg. If she is as talented as she seems, she could be massive. Daan, Lieke, Stefanie, they’re not so young anymore and we need some of the young talent, to go abroad… Read more »

Yes, this is something of a golden generation for the Dutch. Martens and Miedema are world class and /at least/ six other starters are very strong. They’ve all played together regularly for at three-four years, they play the same 4-3-3 every game, so there is a lot of personal and team chemistry, and they win–a lot. That’s why a talented Roord has had trouble breaking into the lineup. It’s been a frustration for her–but few coaches want to mess with success. With Van de Sanden not in the squad for these friendlies, Roord started at forward last night but came… Read more »

I wasn’t that worried by the “freedom” comment because she plays as a no.10 for Netherlands so that makes sense. The weird thing is that Sarina plays Jill out of position to accommodate DvD as a 10 so Joe would have to make a similar decision. Personally, I prefer DvD in the frontline, I really liked her as a wide forward last season, I see her much more as a player you want in the first line of press and who you want in the penalty area, I don’t see her as a build-up player at all. She has been… Read more »

Just goes to show that a lot of managers, even female Norwegian ones, talk out of their bottom!
Apparently Meado was left out of the squad because of reports of poor performances. Suddenly Fran Kirby can’t play so our number 9 is England quality again!
All I can say is this round of pointless friendlies while the covid virus is still about better not result in any Gunneress injuries or illness!

I love how Jill Roord mouthed “F**K” after she missed. Isn’t there a Dutch equivalent? Clearly living in England has rubbed off on her.

I can confirm that a lot of Dutch people, even if they don’t live in England, will say ‘F*CK!’. The equivalent has rubbed off on Lisa though. She’s been on record going ‘Godverdomme!’ 😉

omg i want a link to Lisa doing that. that’s amazing.

Dankjewel!! Lisa’s Dutch is amazing, and she has to be one of the most fun players on the squad. I mean, as a Dutchie I’m a Viv fan all the way but I love that Lisa comes with her as a package deal. And the way Viv sometimes looks at the camera when Lisa is holding it is just wonderfully cute, a side of Viv I doubt we’d otherwise get to see much of as fans.